"Fargo" season 4 has spun a complex, compelling American fable of race and crime 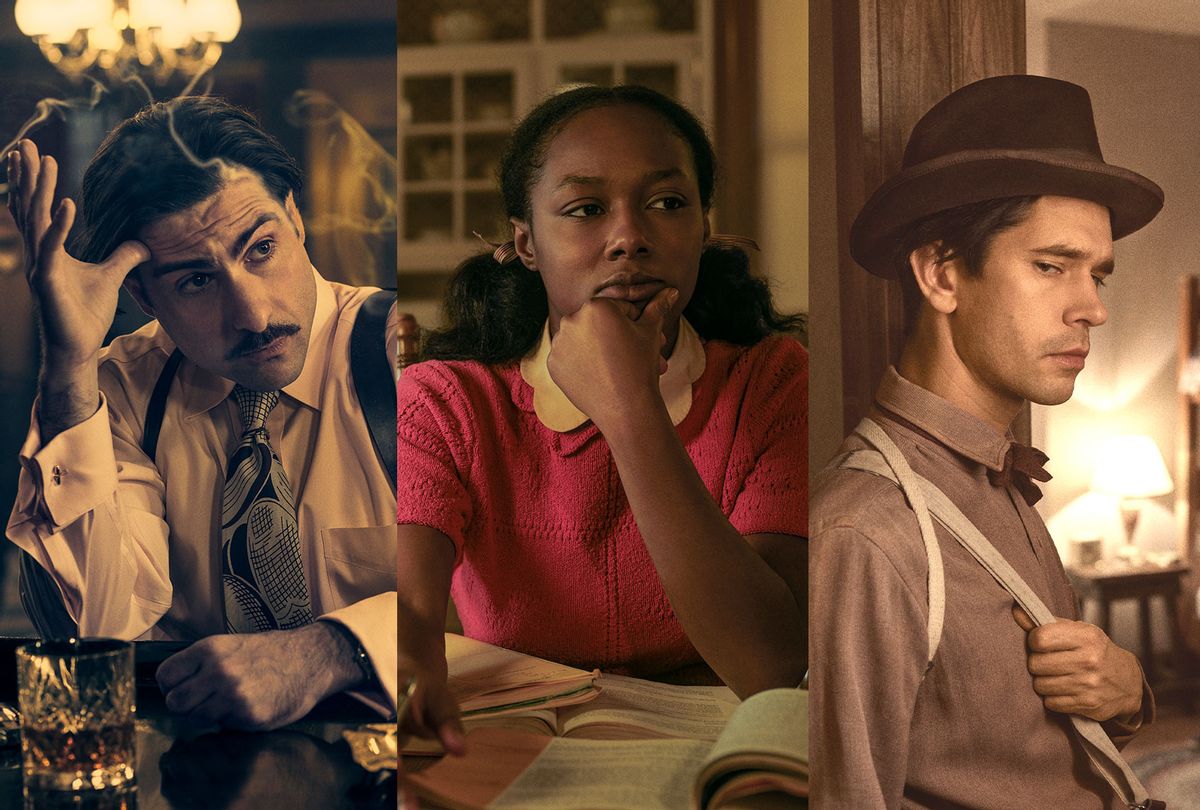 The fourth-season cast of "Fargo" is expansive. Chris Rock and Jason Schwartzman may be the marquee names top-lining the series' 11 episodes, but Noah Hawley and his co-writers build the season in a way that highlights a number of players in its Kansas City mob war.

But what may have been forgotten along the way is that the tale begins as a history report by Ethelrida Pearl Smutny, an exceptionally intelligent 16-year-old played by E'myri Crutchfield. She's the biracial daughter of a white father and Black mother who run a funeral home, a handy business to have in a town with a significant body count. Hawley writes Ethelrida as a quiet witness whose eyes are wide open and who sees the characters coming in and out of her orbit very plainly.

In this very loud crime story of a season and its focus on a mob war between Schwatrzman's hotheaded Josto Fadda and the Italian mob, and Rock's Loy Cannon and his syndicate, it might have been easy to forget Ethelrida's role in the narrative. In the premiere, the only episode featuring her in voiceover as its narrator, she delivers a history report. Her subject isn't her own history, she explains, "but our history."

The history we see is how Irish organized crime usurped the underworld from the Jewish mob, and then how the Italian mafia supplanted that structure. She points out that in their respective heydays, none of these groups were considered white – not Jewish immigrants, not the Irish, not the Italians.

But if American is a definition of immigrants, she asks, how does one become American? Illustrating this point is the season's inciting crime: Josto Fadda and his father are turned away from a whites-only hospital, and at the hospital that finally accepts the Fadda patriarch, he dies.

Season 4 is a mob tale rendered in lacy dialogue. As is alwas true of "Fargo," one's ears either attune themselves to its verbosity straightaway or turn elsewhere; in my view this doesn't get in the way of how fun the story has been. True to form, Hawley introduces a web of subplots that intersect with one another at various points, and finds a way to tie everything off as it should be in the end.

Behind this artistically splendid cloak, however, is a gently-told story not only about race in America, but one that positions the unspoken founding principle of white supremacy as an ever present phantom — always there, only sometimes accounted for and very rarely seen. This makes "Fargo's" fourth saga both timely and a satisfying view of the American dream as a flawed fable.

Originally, Season 4 of "Fargo" was expected to debut in April, much earlier than its late September premiere. Those who subscribe to the belief that everything happens for a reason might say that this season was supposed to arrive in the fall of 2020, right when Americans were grappling with the possibility and then the reality of our first Black woman vice president.

If a vote is a reading of how a nation truly feels about its identity, ours divided along a line where slightly more than half of the country is fine with Kamala Harris being second in line to the presidency. The other half isn't, at least on some level. It breaks down into subsets from there, of course. Some folks will simply never vote for a Democrat; others will never vote for a woman.

Among those who have a problem with Harris being a Black woman, however, you can find a variety of flavors, almost none of them willing to admit that their decision has to do with the obvious facts about her race, but nearly all providing coded excuses that let you know that, actually, that's exactly what it's about.

One popular reason alludes to a fear that Harris will somehow control her running mate and administration partner, President-elect Joe Biden — let's call that the Sapphire excuse, to call upon the term derived from the "Amos n' Andy" character exemplifying the angry and controlling Black woman.

The other is a version of the birther lie, in which Harris' Americanness is brought into question since she's the daughter of two immigrants, one from Jamaica and the other from India.

Both of these are means of questioning Harris' legitimacy, her excellence, her Americanness. "Fargo" digs into all of this separately and together through subplots and through specific characters. It plays out in the story of Ben Whishaw's Rabbi Milligan, the son of an Irish gangster raised within the Fadda family but still treated like a second-class citizen. That is, until he escapes with Loy Cannon's son Satchel and makes a stop in the town Liberal, Kansas, seen in the ninth episode, "East/West."

Nearly the entire episode is in black-and-white, a loose homage to "The Wizard of Oz," in which Satchel and Rabbi check into a boarding house owned by a pair of sisters, neither of whom have an affinity for "coloreds" but one of whom tolerates Satchel.

This is seemingly out of spite for her sister. The title describes the quirk of the house in that the sisters split the guest rooms between east and west, with the marginally more lenient sister claiming ownership over the west side. Upon check-in, guests are asked three questions to determine which room they'll get: Plymouth Rock, or Sutter's Mill? McCarthy or Eisenhower? Old Testament or New?

This place is about as "liberal" as Liberal, Kansas, gets. Outside the sisters' lodgings, Satchel is harassed and threatened by a cop as he sits in Rabbi's car, but the policeman relents when Rabbi shows up. In the Kansas City underworld, Rabbi may be less-than, but beyond the places where he's known, he enjoys the benefits of whiteness, like walking down a small town's street without being bothered or threatened. Satchel and the rest of the Cannons could never do that and never will — and they were not just born in America but come from families who have lived here for generations.

Throughout this season, Hawley treats American racism the way polite white Americans tend to treat it — which is to say as subtext, save for the turns when the story obligates it to become text, as when Jessie Buckley's eccentric angel-of-death nurse, Oraetta Mayflower, is introduced.

Oraetta easily claims her victims and keeps getting hired at different hospitals because she plays the part of a God-fearing woman obsessed with politeness, and never utters epithets even while being free and easy with her racist views. She takes on Ethelrida as her "project" after her white father introduces her as his daughter.

This becomes Oraetta's undoing since, like everyone else, the nurse underestimates the teenager who soon discovers her secret hobby. (Oddly enough, a phantom that's terrorized Ethelrida's family ends up saving her: Her mother explains that a member of each generation inherits the ghost of Theodore Roach, the captain of the ship that brought her ancestors from Africa. Ethelrida's great-great-grandfather strangled Roach, and his spirit has been with them ever since. They simply can't get rid of him.)

If Crutchfield's portrayal of Ethelrida feels realistic, it's because the actor drew upon personal parallels in creating the character. When I spoke with her in January — not long after Harris had suspended her presidential run, I should add — she said she commiserated with her character's quiet frustration.

"People don't expect her to be educated. My mom herself took pride in putting me into private schools, Catholic schools, wanting nothing but the best for me. With me being an actor, she put me with a speech coach because she wanted me to be the best," Crutchfield said.

The effort it takes for her character to maintain her composure despite all shots being taken at her, Crutchfield said, is substantial. She's felt it herself. "Sometimes you want to tell someone off, sometimes you want to stoop to some people's level, but then again, you have to do the bigger person. You do it because it would be held against you if you don't keep your composure, which sucks because I'm the victim, I have every right to react with anger. But I have to keep my composure because of who I am, where I am, what I look like and the history of just everything that's going on in the world."

The view from Kansas City in 1950 and 1951 bears too many similarities to the modern age.

In the season finale of "Fargo," a character describes the contortions that anyone seen as an "other" must engage in for some hope at being considered American. "We change our names, we eat each other. We forget. Don't you get it? … This is the ladder, but there's nowhere to go."

Supposedly this nation offers everyone an equal shot at the fairytale ending of America written into its founding document: life, liberty and the pursuit of happiness. Depending on the skin you're born into, the attainability of the second and third terms shifts and shrinks, and historically many of the people who seek them out must readjust their expectations.

This "Fargo" chapter is distinct in that sense, in that it takes a supposedly "true" crime story and widens the lens to spin a fable of American identity. The dream realized in Harris and other people of color who forged a path before her and will follow in her wake is that in the future, no one will be forced to make such adjustments and can step into the broadest range of American possibility