Embattled Sen. David Perdue is now accused of self-dealing through a defense bill that he helped write 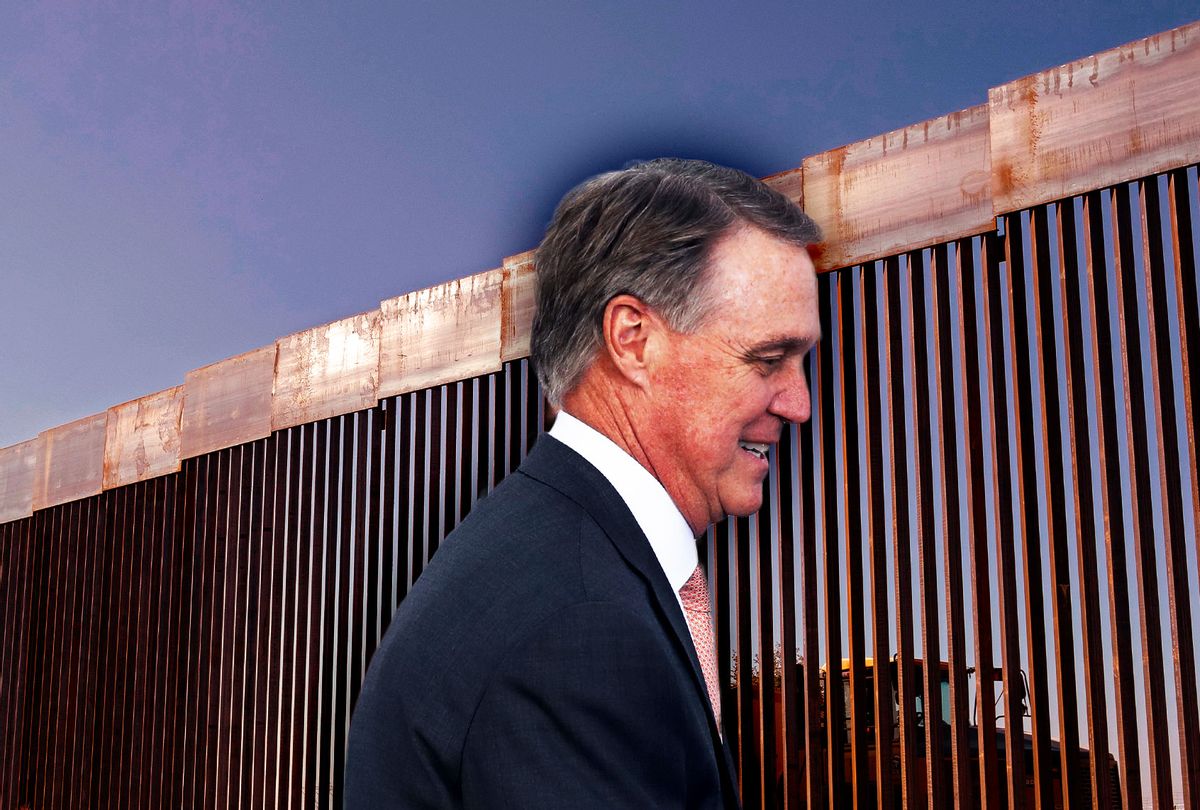 Last month, Salon reported that a government accountability watchdog filed a federal complaint accusing Sen. David Perdue, one of two multimillionaire Georgia Republicans facing a tight runoff election, of possible insider trading, following reports that he appeared to use the power of his office to maximize his investments in a defense contractor.

At the same time, however, Perdue was also casting votes that would have deprived his home state of military funding.

In the early months of 2019, Perdue, chair of the Senate Armed Services Subcommittee on Seapower, personally steered $4.7 billion to niche but lucrative submarine construction projects that boosted the company's stock. Shares rose more than 42% while Perdue worked on the bill, and he turned a neat profit when he sold.

Throughout those same months, however, Congress was locked in a dispute with President Trump about funding for his quixotic campaign promise to build a wall along the U.S.-Mexico border.

From December 2018 to January 2019, while Perdue was buying up stock in the submarine company, the president shut down the government and broke off negotiations with Democratic lawmakers over wall funding, a deeply unpopular decision: A Politico/Morning Consult poll showed that only 7% of voters approved of funding the wall to end the shutdown.

A few weeks after the government reopened, Trump tried to sidestep the problem by declaring a national emergency at the border. The declaration is "a great thing to do," he said, because the United States has "an invasion of drugs, invasion of gangs, invasion of people," which he said posed a threat to national security.

That move came after the passage of a bipartisan spending package that allotted nowhere near the $5.7 billion that Trump wanted to put towards building more than 200 miles of reinforced steel fencing. With the declaration, the president hoped to secure $6.5 billion more to start construction immediately, bypassing the legislative approval typically required from Congress.

"Some of the generals think this is more important," he claimed.

Many of Trump's allies, and about a half-dozen Senate Republicans, spoke out against the plan.

Sen. Marco Rubio of Florida said it violated the Constitution, and Sen. Susan Collins of Maine called the decision "a mistake." Sen. Thom Tillis of North Carolina said he hated the idea, and Sen. John Cornyn of Texas said "it would not be a practical resolution."

Sen. Lindsey Graham, R-S.C., warned that a "war" could break out among Republicans if Trump invoked the emergency act.

In March of 2019, 12 Republican Senators joined all 47 Democrats in a resolution blocking Trump's declaration. Perdue, however, was not among them, and characterized the situation on the Mexican border as an "invasion."

The president vetoed the resolution, and Congress failed to overrule the veto.

That would hit particularly hard in Georgia, which is home to about 70,000 active-duty service members.

The cuts threatened as much as $234 million in military funding for the Peach State, according to some analysts, depriving projects at Fort Benning and Fort Gordon alone of at least $112 million, Roll Call reported in March.

During that time, Perdue was using his voice on the Armed Services Committee to advocate for the wall, rather than for alleviating the cuts to his own state.

"I was not prepared for the amount of drug traffic that we saw," he said at the time, remarking on a recent trip to the border.

He even rationalized the choice to sacrifice Georgia's military budget in the very political context he faces today: A Democratic successor to Trump would not pursue the border wall, so it was imperative to act quickly.

"This is not a small thing for me because I know we may have a Democrat in the White House that I might disagree with," said Perdue. "You have to look at it with all possibilities in mind, and I think we've got a full-blown invasion right now of illegal drugs."

At the same time, however, Perdue was working behind the scenes on the defense bill that would soon play to his personal advantage — and he quietly began to sell off stock.

When the Senate passed the spending bill that June, Perdue released a statement touting a number of items in the bill, including the $4.7 billion he had landed for the submarine projects. Perdue sold between $1,000 to $15,000 in the company's stock that same day. He sold the last of his shares in July.

The spending bill, however, took another six months before it became law last December, and in that time, the Pentagon — independent of any known pressure from Perdue — announced it would spare Georgia's military projects from cuts related to the border wall.

Georgia's military projects were back on the chopping block by February 2020, however, when Trump tried once again to appropriate border wall funds.

Perdue, who received private briefings on the emergent coronavirus pandemic that same month — and made a series of strikingly well-timed stock transactions — did not challenge Trump on the funding question. Instead, he pointed to Senate Democrats, despite the fact that Republicans controlled the chamber.

"Senator Perdue prefers that the wall at our southern border be funded through the regular appropriations process, but Senate Democrats have been unwilling to work with us to get that done," Perdue spokeswoman Cherie Gillan told the Atlanta Journal-Constitution at the time.

Meanwhile, the top Republican on the House Armed Services Committee, Rep. Mac Thornberry of Texas, blasted Trump's power grab. He described Trump's attempt to "re-program" funds for the wall as "contrary to Congress's constitutional authority," saying it required Congress "to take action." Unlike Perdue, Thornberry had earlier announced his retirement from Congress, and was not running for re-election in 2020.

The wall budget has returned to the headlines in recent months. In October, a federal appeals court ruled against Trump's move to redirect military construction funds, after which the Supreme Court agreed to take up the case.

While Trump has falsely promised, ever since launching his first presidential campaign, that Mexico would pay for the wall (through some unexplained mechanism), it remains unclear which part of the government will actually foot the bill.

This week, Perdue faces another choice as the Senate votes on the 2021 National Defense Authorization Act amid threats of a veto from Trump, who has demanded that the bill strip social media companies of special liability protections. Perdue voted for an earlier Senate version of the bill, as did his Republican colleague Kelly Loeffler, who faces her own Georgia runoff on the same day as Perdue.

Trump is also irate language in the bill that would rename military installations honoring Confederate heroes.

Either way, the issue appears to pose a trap for the two Georgia senators, since two such bases, Fort Benning and Fort Gordon, are in their state. Voting to override Trump's potential veto might risk alienating his base, especially if the president chooses to fight over the issue, while siding with Trump on the Confederate names might turn off independents.

Loeffler has sided with Trump on virtually every issue, this one included. Perdue has not made his position on the defense bill clear.