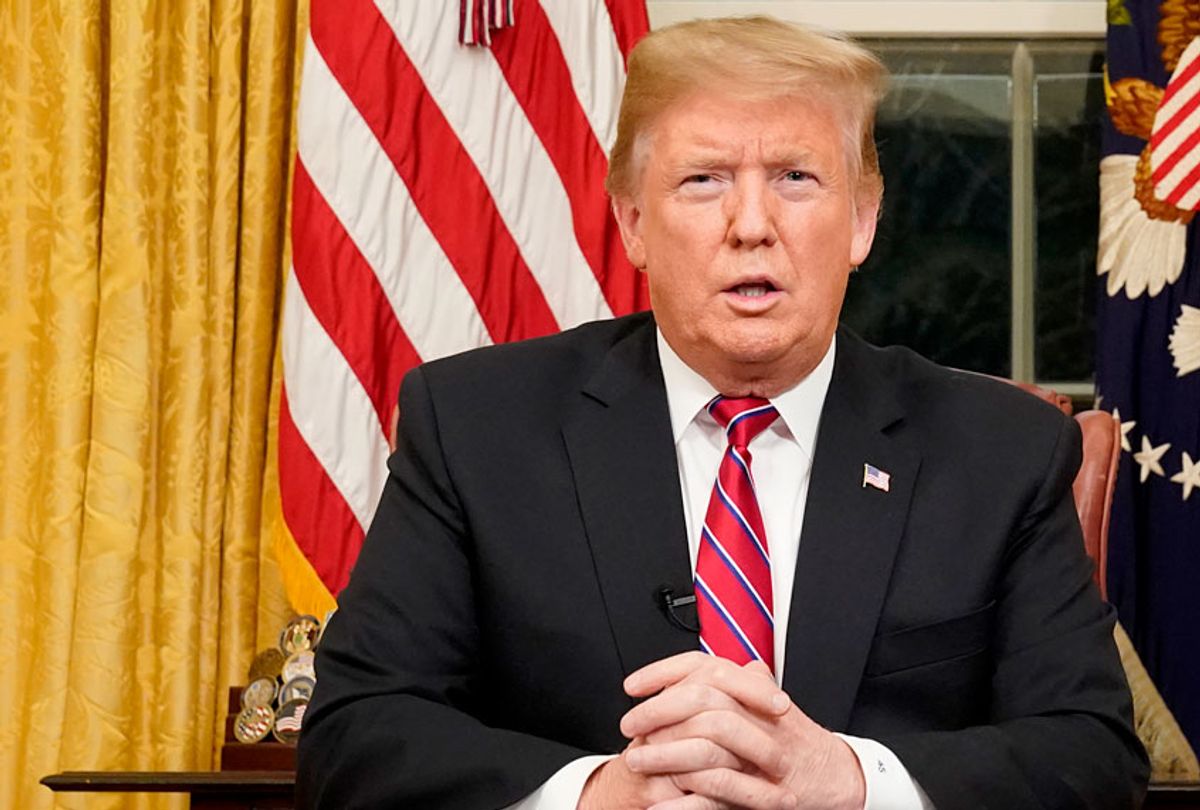 President Donald Trump speaks to the nation in his first-prime address from the Oval Office of the White House on January 8, 2019 in Washington, DC. (Getty/Carlos Barria)
--

On the same day as President Donald Trump's televised Oval Office address – in which he stoked racial resentment of immigrants, using fear as a motivator to rally support for the construction of a $5.7 billion "wall" along the U.S.-Mexico border – presidential historian Jon Meacham suggested a link between the rhetoric used by the commander-in-chief to a powerful member of the Ku Klux Klan from decades ago.

"America should 'build a wall of steel, a wall as High as Heaven,' against the flow of immigrants," Meacham wrote on Twitter Wednesday night, citing former Georgia Gov. Clifford Walker's words at a 1924 convention of the KKK.

The "New Georgia Encyclopedia" elaborates on Walker's ties to the white supremacist organization:

Walker again ran for governor in 1922 and, after soliciting Klan support during the race, easily defeated Hardwick. Unlike his predecessor, Walker remained loyal to the Klan while governor. He addressed a national Ku Klux Klan convention, where he promised to meet with Klan leaders in the state on policy issues. Walker kept his word and often consulted Klan leaders on matters regarding state policy. In 1924 Georgia voters elected Walker to a second term.

Trump's Tuesday speech was reportedly written by White House aide Stephen Miller. CNN contributor April Ryan, a White House correspondent, revealed on Monday that her Republican sources had confirmed that Miller was writing the speech. Miller is known for his hardline immigration views and for crafting Trump's controversial travel ban to the U.S. by people from several Muslim-majority countries.

"From my sources — my good Republican sources — they're telling me that the president’s favorite immigration guru, Steve Miller, is writing the speech," Ryan told CNN host Don Lemon.

During his prime time address, Trump wrongly claimed, "At the request of Democrats, it will be a steel barrier rather than a concrete wall." The Democrats, in fact, did not request to construct a steel barrier along the southern border. Democrats have long been vehemently opposed to the idea of building a wall between the U.S. and Mexico. In fact, Democrats have opposed the construction of any steel or concrete barrier along the Southern border. CNN noted they have "only kept the door open to funding a border barrier as part of a broader immigration deal."

Trump, however, rightly claimed that Senate Minority Leader Chuck Schumer (D-N.Y.) "has repeatedly supported a physical barrier in the past along with many other Democrats."

According to CNN, "Schumer has previously supported legislation to build physical barriers on the U.S.-Mexico border. Most notably, Schumer and other Democrats supported the 2006 Secure Fence Act that authorized the construction of several hundred miles of fencing along the border — but not a wall." However, as long as the government remains shutdown, Schumer and House Speaker Nancy Pelosi have refused to offer any additional funding for a border "wall."

During his Oval Office address, however, Trump urged congressional Democrats to give in and allocate billions of dollars in funds for a wall he repeatedly promised Mexico would pay for on the 2016 campaign trail. The president argued that a wall was necessary in order to resolve a "humanitarian and national security crisis on our southern border," as he portrayed immigrants as violent criminals. "How much more American blood must we shed before Congress does its job?" he asked.

Trump and congressional Democrats continue to spar over funds to build a wall along the southern border, with Trump threatening to declare a national emergency to fund the wall if Democrats do not budge. The shutdown, which approaches the three-week mark, appears to have no end in sight after Trump walked out of a meeting with Democratic leaders Wednesday at the White House. Meanwhile, hundreds of thousands of federal workers continue to go without pay.