Yes, older people like my mom should get the vaccine first: Here's why

My mother has dementia and a slew of health problems. Giving her the shot first could save your life 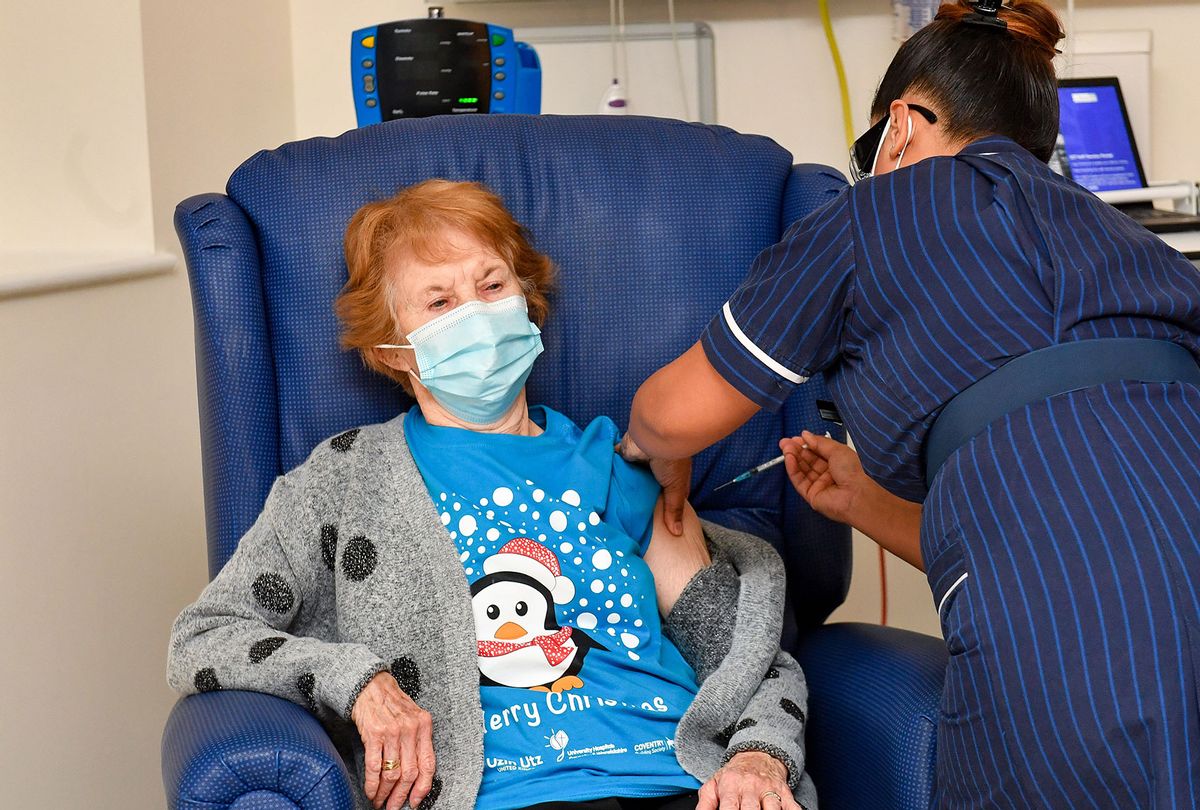 Margaret Keenan, 90, is the first patient in the United Kingdom to receive the Pfizer/BioNtech covid-19 vaccine at University Hospital, Coventry, administered by nurse May Parsons, at the start of the largest ever immunization program in the UK's history on December 8, 2020 in Coventry, United Kingdom. (Jacob King - Pool / Getty Images)
--

The calls come almost every day, sometimes twice a day. The message varies little in its directness. Someone else at my mother's facility in New Jersey, usually but not always a staff member, has tested positive for COVID-19. "We test all employees every other day, and will continue to keep you updated," the voice says. The calls are a reliable fixture in the endless, fluid days. Maybe soon they'll stop. And maybe somehow my mother, my eternally reclusive, antisocial, estranged mother, will be a small part of how the rest of us get to be together again.

My mom has Alzheimer's and a host of other medical and mental health issues. These days, she is relatively comfortable and, as her social worker tells me, "pleasantly demented" most of the time. She will never get better. She is on a path that leads in only one direction. But now that vaccines are being distributed across the country and health care workers and nursing home residents are at the front of the line, I feel more relieved these days than I have since Mom went into care in July. Because the sooner she receives the vaccine, the more promising the odds become — not for her but for the people all around her.

The pandemic has unleashed a host of ethical quandaries upon us, and as a nation we have not risen flawlessly to the challenge. When more patience and restraint could have prevented so much suffering, we've instead been mired in conspiracy theories and old fashioned self-will. (The most durable image of 2020 for me will likely be that of a group of screaming, MAGA-hatted protesters gathered in Washington after the election, among them a man with his mask pulled down as he sends spittle into the atmosphere.) But other choices have been harder to call. Get medical attention for a non-COVID health issue, or try to wait it out? Order food to support a local business, or hold off to limit the workers' exposure? And always, above all the other questions: Who gets treated first? Who gets vaccinated first? What is the value of any of our lives, and what is our place in the queue?

This week, I had a conversation with one of my mother's administrators about the state's palliative and end-of-life guidance, and what I think her final wishes might be. It was painful, but not difficult. Whatever happens for the rest of her life, I want my mom treated humanely and respectfully, without invasive procedures or unnecessary suffering. But the vaccination will create new questions and conversations.

As many as 40% of COVID-related deaths in the U.S. have been among residents and staff of nursing facilities. Close to home, New York Times correspondent Mike Baker starkly notes that "New Jersey has reached a new milestone of the pandemic: 1 out of every 500 people in the state have died of COVID-19. It's the highest concentration of deaths among states — and also higher than any per-capita death toll recorded by any nation on Earth." My late stepfather escaped the North Tower on 9/11. I never imagined his wife would find herself at the epicenter of a crisis that currently has the fatality equivalent of a 9/11 every day.

Earlier this year, Arthur Caplan, head of the Division of Medical Ethics at NYU School of Medicine, talked to The Guardian about future treatments and what makes age "an important factor in making the  terrible choice of who will receive scarce resources in a pandemic." Vaccination creates its own unique logistical and ethical issues. Speaking to Salon this week, Caplan considered the variables.

"I think it's going in a good direction that we're prioritizing, at least initially, people with the greatest risk of death," he said. "That's an important variable. That pushes nursing home residents and staff very high up at the top of the list. Pushes people who are cleaning rooms in hospitals or getting patient exposure. Their death rates have been very high. The health care workforce is pushed up, not because they're dying in an exceedingly high rate, but we have to maintain them. I agree with that too. They may not be the highest at risk of death, but if they get sick or get hospitalized or out, you have trouble, it's a problem."

Then Caplan asked a painful question. "Should everybody in the nursing home get a scarce vaccine initially? No. Many people in nursing homes would be there knowing that they don't have very long to live or they're refusing treatment. … I wouldn't make them the priority. I don't think that's the way to save lives, so to speak."

Considering further, he said, "On the other hand, they would be up pretty high, maybe in the next rounds of vaccination after it gets through the health care workforce and the initial group of non-terminally-ill residents of nursing homes and palliative care, hospice nursing home settings."

I think about my mother, and wonder when she will cross over from one type of patient to the other, and where in the hierarchy she will fit. And I know that as uncomfortable as these issues are to examine, the best any of us can do is to consider the greatest good. Not perfection, not ideals, just that. "Personal choice is a key value of the ethics of American health care," said Caplan. "But when you're dealing with infection risk to others, then the values of preventing harm can overtake or trump the personal choice, autonomy value. If you're in a prison, if you're in an institution for the intellectually disabled, if you're in a nursing home, there are settings where it's especially risky for those groups of people. I think your choice has to yield to their protection and safety."

I was only beginning to fathom these questions back in April, when my stepfather was still alive and I first talked to Lynn Casteel Harper, a New York minister and author of  "On Vanishing: Mortality, Dementia, and What It Means to Disappear."  She said at the time: "My greatest hope is that on the other side this pandemic can be a portal that we walked through to create a more compassionate setup for our frail, older adults."

Now, with an American death toll that has long surpassed the combined loss of five wars, I spoke to Harper again more recently to ask what she thinks about the vaccine rollout.

"There's nothing hypothetical about it," she said. "Here we have the very real manifestation of who we value. It's not subtle or tacit. It's now explicit with this vaccine rollout. I'm very relieved that the United States is prioritizing longterm care facilities. I think it's a no-brainer, morally. These places have been ravaged. But it's also such a sad commentary on our American systems and structures that so many people are made vulnerable and we're having to have these discussions. Is it essential workers or is it older adults? Pitting vulnerable group against vulnerable group is worthy of our collective scrutiny."

It's no small irony to me that as long as my stepfather was living and my mother was still in her own home, she was likely well protected from the virus. She didn't socialize; she didn't have close relationships. She and my stepfather lived as independently of others as they possibly could. Yet being big on personal freedom made them part of something nonetheless. When I had to go to their home the day my stepfather died, I saw a photograph of Donald Trump proudly displayed on the mantel.

Now my mother is part of a community. She has neighbors she talks to and workers who bring her meals and roll her around in her wheelchair. She's connected in a way she never would have chosen for herself. There are no border walls for viruses. There's only the deepening evidence that one person's safety and health affects all of us. That the child of the person emptying a trash basket in a facility somewhere deep in New Jersey might be better off for the shot in the arm my mom gets. "The idea that we can live in some ways these isolated lives … is just an illusion and a myth and a falsehood," says Harper. "Maybe a little bit of my hope is that we can see 'neighbor' in a much bigger category. This chain of neighbors. And it shouldn't matter if we don't know their names, because they're part of the human community, part of the human family. And that should matter."