"They let us down": The Mayo Clinic's galling obsequiousness to Mike Pence

Why couldn't the "best hospital in America" stand up to the VP? 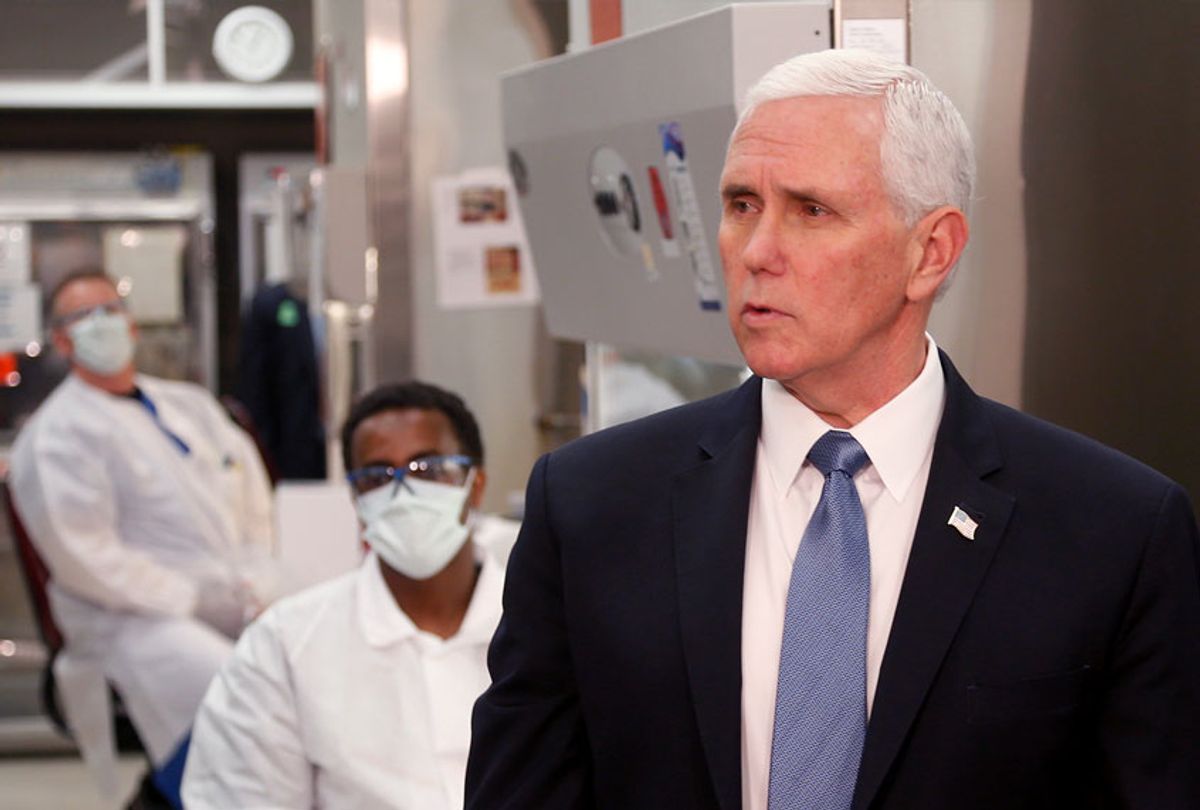 The names of the health workers identified here as Gloria and Diana have been changed to protect their privacy.

It's to be expected that Trump and his teammates think the rules never apply to them. It's understood that a man like Vice President Mike Pence — whose most viral moment came when he  touched a piece of NASA's equipment marked "DO NOT TOUCH" — certainly doesn't. And the same former governor of Indiana, who somehow takes pride in his botched response to his state's HIV outbreak, probably doesn't understand the concept of public health.

But wow, his performance earlier this week during a visit to the Mayo Clinic was a new low. It stings because it revealed not just his own selfish ineptitude, but the toadying cowardice of a facility whose entire reason for being is supposed to be healing.

On Tuesday, Pence dropped by the Rochester, Minnesota branch of the Mayo Clinic, which is consistently ranked as the top hospital in the United States, to meet with plasma donors and healthcare workers, and visit a coronavirus testing lab. He smiled for the press and cheerfully bumped elbows in lieu of handshakes — no doubt because touching hands was always too sexual anyway. He was also the only barefaced person in a sea of masked countenances.

As he affirmed his specialness to reporters, Pence explained, "As vice president of the United States, I'm tested for the coronavirus on a regular basis, and everyone who is around me is tested for the coronavirus. And since I don't have the coronavirus, I thought it'd be a good opportunity for me to be here, to be able to speak to these researchers, these incredible health care personnel, and look them in the eye and say 'Thank you.'" Perhaps then he couldn't wear a mask because he thinks his eyes are in his mouth, like a freak toad.

In a swiftly deleted explanation from a social media flunky who definitely hasn't since been fired or smothered with a pillow, the clinic tweeted on Tuesday that "Mayo Clinic had informed @VP of the masking policy prior to his arrival." (Karen Pence, meanwhile, told Fox News this week that "It was actually after he left Mayo Clinic that he found out that they had a policy of asking everyone to wear a mask," so — surprise, surprise — somebody's not telling the truth here.)

The administration has faced criticism for practicing "Do as I say, not as I do." @VP's office has not answered why he violated the @MayoClinic policy today: https://t.co/oTRy0Ydqqc pic.twitter.com/RPtWPUZoZE

The Mayo Clinic soon replaced the aforementioned message with one more suitably obsequious: "We are grateful that @VP and @GovTimWalz visited Mayo Clinic today to hear about our work fighting the #COVID19 pandemic. We look forward to continued collaboration to develop essential testing and treatment for our patients and communities." That tweet, by the way, has already become an instant master class in defining the ratio.

We are grateful that @VP and @GovTimWalz visited Mayo Clinic today to hear about our work fighting the #COVID19 pandemic. We look forward to continued collaboration to develop essential testing and treatment for our patients and communities.

The Mayo Clinic has had a mask policy in place for over two weeks now; it even sent out a press release announcing that it "is requiring all patients and visitors to wear a face covering or mask to help slow the spread of COVID-19." There doesn't appear any teeny tiny print anywhere that reads, "except Mike Pence." It also affirms that policy on its patient page, saying, "Please bring your own face mask or covering to wear. Part of our protocol for ensuring your safety is to require all patients, visitors and staff to wear a face covering or mask while at Mayo Clinic to guard against transmission of COVID-19." Does the word "all" mean something different in Minnesota? While we're at it, then, at what level of elected official do you have to be before you can just barge into an operating theater? Can Mitch McConnell swing by to change a few IV bags — you know, as a photo op?

No one here believes that our American healthcare system is remotely fair or equitable. Nobody thinks that VIPs don't get perks and preferential treatment. In my own small and anecdotal experience, I've seen it firsthand in the philanthropic world, where everybody's got an inspiring story of how they didn't stop until they got an appointment with that "best of the best" doctor who saved their lives.

We've certainly witnessed it starkly of late, living in a country where celebrities can get tested for the coronavirus while legitimately sick people are advised to ride it out at home without one. But even knowing all these things, for the multitude of us who actually care about patients, this entire Pence episode somehow still really takes the goddamn biscuit.

"It's all about leadership, isn't it?" my friend Gloria said when we spoke on the phone this week. Gloria is a licensed paramedic who now teaches paramedicine. She has a lifetime of experience with egomaniacs who don't want to abide by the protocols. She knows that's exactly when you have to step up. "People are coming to you because you're the authority," she says. "So help them understand. You have to educate people all day long."

She adds, "There are universal precautions, and they're a really big deal. People don't understand PPE. It's real putting it on, it's real taking it off. Then you have Number Two walking in and not wearing a mask. I'm so saddened he would choose that." She says, "I've run calls for 30 years, and it's not about your politics. It's about respecting the process, respecting the healthcare workers."

Diana, an EMT with a squad in New Jersey, feels similarly disappointed. "What the Vice President did was a slap on the face of all of us in the frontlines," she told me via email Wednesday. "That Mayo Clinic would allow him to do it is even worse; it is a neglect of duty from personnel trained to know better." She adds:

"We execute detailed procedures to protect ourselves, our partners, our families and our patients. It has been grueling to see so many victims of COVID-19, to transport so many senior citizens from nursing homes knowing they are unlikely to ever see any family again. Hours and hours in thick protection suits, masks, visors, trying to communicate with each other and trying to not only provide emergency care for the patients but to provide warmth through all this gear. It is so hard to leave my young daughter at home and take the risk of getting sick or dying, but I do it because I believe we must all do our best in times like these. This moment however was deeply disheartening. I hope there are severe consequences for Mr. Pence and for the Mayo Clinic. They let us down."

Alison Bateman-House, assistant professor in the Division of Medical Ethics at the NYU Grossman School of Medicine, observes, "Mayo had an obligation to tell him no mask, no tour. I assume they did not want to find themselves on the wrong end of the President's rhetoric, but by permitting this they have [undercut] the public advice that the entire country is being asked to heed." And Arthur Caplan, the head of the Division of Medical Ethics at NYU School of Medicine, says, "I think the Mayo Clinic failed dismally to protect both its patients and staff, and it failed the country, as one of our leaders in healthcare, to be a role model." He said that the process ought to be, "We don't care if you're a vice president or a 6 year old-child, this is the policy." Caplan added that the incident was troubling, because, "when you permit exceptions, you're setting a precedent."

The rules are pretty simple. First, do no harm. Pence never had to take an oath of that order, so he apparently considers himself free to wreak whatever havoc he likes. But for a facility that promises "to protect all of our patients and staff… while there is a threat of COVID-19 transmission," that is right now conducting multiple clinical trials involving patient participants, to cash in any of its credibility for suck-up points is beyond cynical. It's reckless and it's cruel and it goes against the foundational principles of medicine.

Of course Pence, like an incontinent preschooler who doesn't want to wear his pull-ups, was going to try to assert his dominance during his visit. Nobody expects him to protect anybody but himself and his cronies. But the hospital that calls itself "the trusted leader in healthcare worldwide" ought to have been able to rise to its own basic imperative. Instead, at a moment of deep, universal crisis and suffering, it chose to follow Mike Pence's lead. It exposed its true face to everybody.