The soapy teen ballet series is high on melodrama, but its eating disorder plot rings true to life 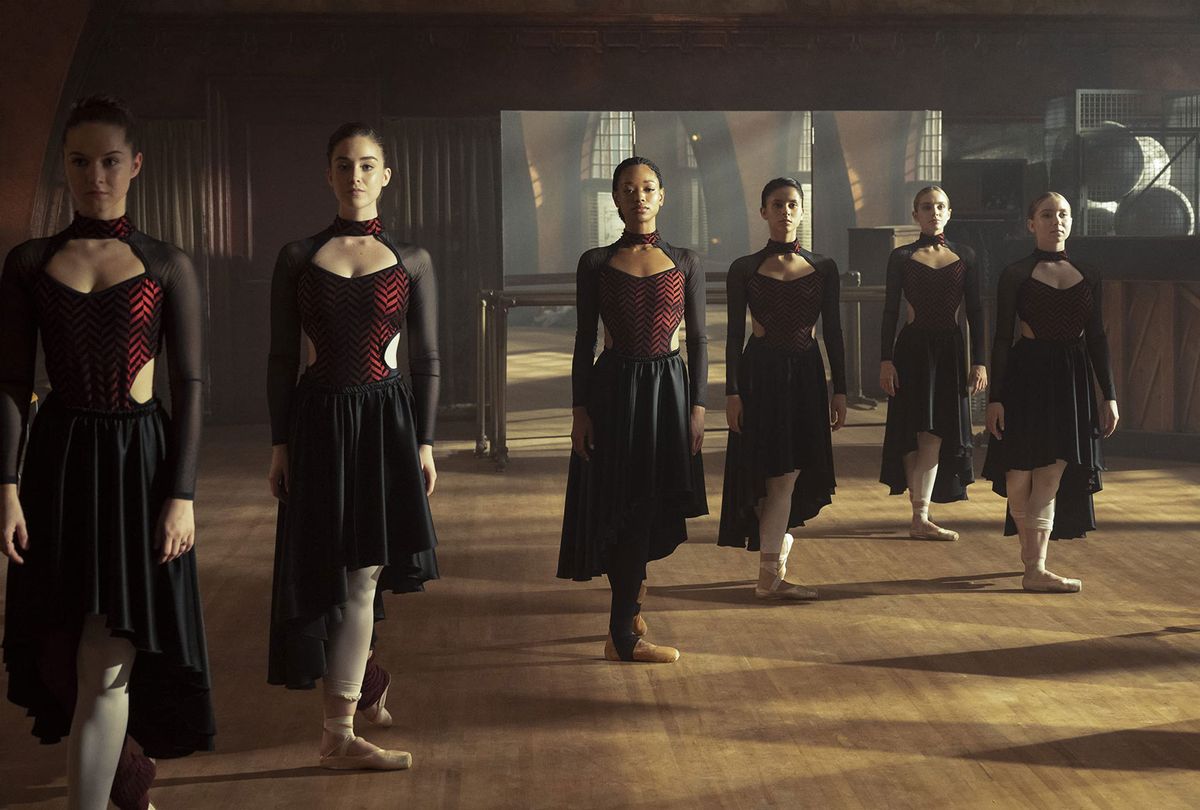 Occasionally when I'm in the midst of baking — braiding a loaf of yolk-gold challah or draping a nearly translucent round of pie dough over freshly-diced apples —  I'll think of the day my figure skating coach brought a five-pound bag of all-purpose flour to the rink. "Imagine doing a double axel with two of these strapped to your waist," she told me. It was January, our first training session back after the holidays. I was 14, in the throes of puberty, and already acutely aware of the way my stomach folded over the waistband of my tights.

She propped the flour bag on the boards, squeezing it gently between her short cherry-red nails, and asked if I had any questions, while I swizzled back-and-forth slowly. I did not. She called after me as I embarked on a warm-up lap: "It's just a matter of self-control, of taking care of yourself."

I only competed for a few more years after that — two concussions ended whatever career I might have had — but my coach's words lingered like the scripture I'd spent so much of my youth memorizing. For a very long time, I equated wellness with discipline, discipline with thinness, thinness with goodness.

This was only reinforced by the other activities I picked up as an older teenager and young adult; when I began to compete in ballroom competitions, my coach urged me to become "costume-ready" and praised me effusively when I lost 14 pounds in three weeks. I don't think he knew that I did it by subsisting on cottage cheese topped with salsa and walking for hours on a treadmill on a steep incline.

I'm not sure he would have cared if he had known.

That's what eating disorders do to you. They make you feel deeply isolated and alone, despite the fact that, according to research from the National Eating Disorder Association, an estimated 8 million Americans have an eating disorder – seven million women and one million men.

For ballet dancers, it's even more common; as Linda Hamilton, a New York psychologist who has worked with ballerinas with eating disorders told the Washington Post, "One out of two dancers suffer from an eating disorder. It's still an ongoing problem and it needs to be addressed, because once ballerinas develop an eating disorder, it's hard to recover."

That's one of the reasons why, when I was watching Netflix's new fictional teen drama "Tiny Pretty Things," which centers on students at an elite ballet academy, I braced myself for the inevitable eating disorder subplot. When it finally arrived — and I know this sounds strange — I was pleasantly surprised. It was refreshing to see a media depiction of eating disorders that didn't center a white woman; this series focuses on the struggles of a male dancer.

"Tiny Pretty Things" is based on the hit young adult novel by Dhonielle Clayton and Sona Charaipotra and executive produced by Michael MacLennan, who served as a writer and producer on shows like "The Fosters" and "Queer as Folk."

It opens dramatically on a teenage girl, Cassie Shore (Anna Maiche), dancing on a Chicago rooftop as a party carries on nearby. She's approached by a hooded figure who presents her with a white rose and, as she attempts to resist their advances, stumbles over the edge of the roof and hits the pavement below. This accident (or perhaps attempted murder?) leaves her in a coma.

After Cassie's accident, Neveah Stroyer (Kylie Jefferson) is selected to take her place at the Archer School. Neveah, a Black dancer from Inglewood, Calif., was selected by the school's president, Monique (Lauren Holly) in the hopes that the public will notice that the academy is interested in giving becoming more inclusive.

Much of the 10-episode series focuses on Neveah's struggles to fit in and get ahead, as well as the very heightened drama that takes place at the school. There's competition, sabotage, familial troubles, partying, a bizarre piece of Jack the Ripper choreo, and a hefty amount of sex. Oh, and a responding officer who has the quote-worthy line: "Look, I don't know a nutcracker from my nightstick, but I know danger when I see it."

It's not a perfect series; themes like racism, queerness and identity sometimes get muddled amid the more soapy bits of melodrama. Think, as star Damon J. Gillespie aptly put it, "'Black Swan' meets 'Pretty Little Liars.'"

But the struggle of male dancer Oren Lennox(Barton Cowperthwaite) with bulimia feels achingly real. It begins with an announcement from their choreographer Topher Brooks (Shaun Benson).

"I'm to remind all the males of their physicals today," he said. "Perhaps this will be the kick in the ass that some of you fatsos need to lose a few."

Oren meticulously journals his food intake. If you look closely, you can see the word "bad" next to some foods, like licorice. He begins establishing planned days to binge and purge, and starts to keep a scale next to his bed. Inevitably, he starts to get dizzy and lightheaded during practice but, as he tells one of his fellow students, he's finally "getting results." Despite the fact that people grow concerned for his health, it's a cycle that seems impossible to break.

As someone who has been there, it all felt deeply familiar — and, unlike some shows like "Degrassi" and "Beverly Hills 90210," it's not all resolved within a one- or two-episode arc.

With Oren's story, "Tiny Pretty Things" also sets itself apart from the typical media portrayals of eating disorders, which tend to fixate on them as white women's diseases. We see this in the 1981 film "The Best Little Girl in the World,"  Netflix's "To the Bone," the fourth season of "Glee" and even the most recent season of "The Crown," which explored Princess Diana's struggles with bulimia.

These depictions vary in their respective levels of sensitivity and, even when directors and actors attempt to nuance, many viewers who have struggled with eating disorders may find the media distressing. As Sophie Gilbert wrote in "The Atlantic," when the trailer for "To the Bone" was released, "It prompted a flood of critiques noting that the film appeared to contain many images and scenes that could be triggering to recovering anorexics."

The same could be said of "Tiny Pretty Things." Some of the scenes that depict Oren purging are really, really difficult to watch. That said, the series' choice to show a character who is not a white woman suffering from the illness more closely resembles the real life diversity of people who need treatment.

However, Oren is white, and while body image is an ever-present undercurrent in the series for everyone, none of the characters of color in the series are shown to struggle like he does. Data shows, however, that eating disorders are increasingly common among people, especially women, of color. It could have been interesting to see more concretely how Neveah grapples with body image expectations in a sphere that has long prized thinness and whiteness.

As the National Eating Disorder Association reports, Black teenagers are 50% more likely than white teenagers to exhibit bulimic behavior, such as binging and purging, while "in a study of adolescents, researchers found that Hispanics were significantly more likely to suffer from bulimia nervosa than their non-Hispanic peers."

Additionally, men, people of color and members of the LGBTQ communty are less likely than white women to seek treatment for or be diagnosed with an eating disorder, despite displaying identical symptoms.

In many ways, the lack of diversity in the depiction of eating disorders mirrors the lack of fictional characters of color who struggle with their mental health. In her 2017 "Bitch" essay, Nyasha Junior writes: "The lack of images of African American women with mental illness, combined with the myth of the "strong Black woman," contributes to the mistaken notion of mental health issues as 'a white-girl thing' and compounds their stigma among African American women."

Do we need more depictions of eating disorders onscreen? It's a tough call. In Sophie Gilbert's "Atlantic" piece she spoke with Dr. Melissa Nishawala, the clinical director of the Eating Disorders Service at NYU Langone's Child Study Center.

"Because individuals struggling with anorexia nervosa often have an extreme drive to the superlative — to be the best student, to feel the most valued, and to become the thinnest — any film depicting anorexia nervosa risks igniting the quest towards starvation," Nishawala told Gilbert. She advises that filmmakers avoid including images of bony figures, focusing on numbers (calories or weights), or depicting scenes of specific eating-disordered behaviors.

For better or worse, "Tiny Pretty Things" does all of those things, but it also breaks through the well-established cultural stereotypes of who displays those behaviors and why. Perhaps it could inspire someone who doesn't look like they'd typically play that role seek the help they need.