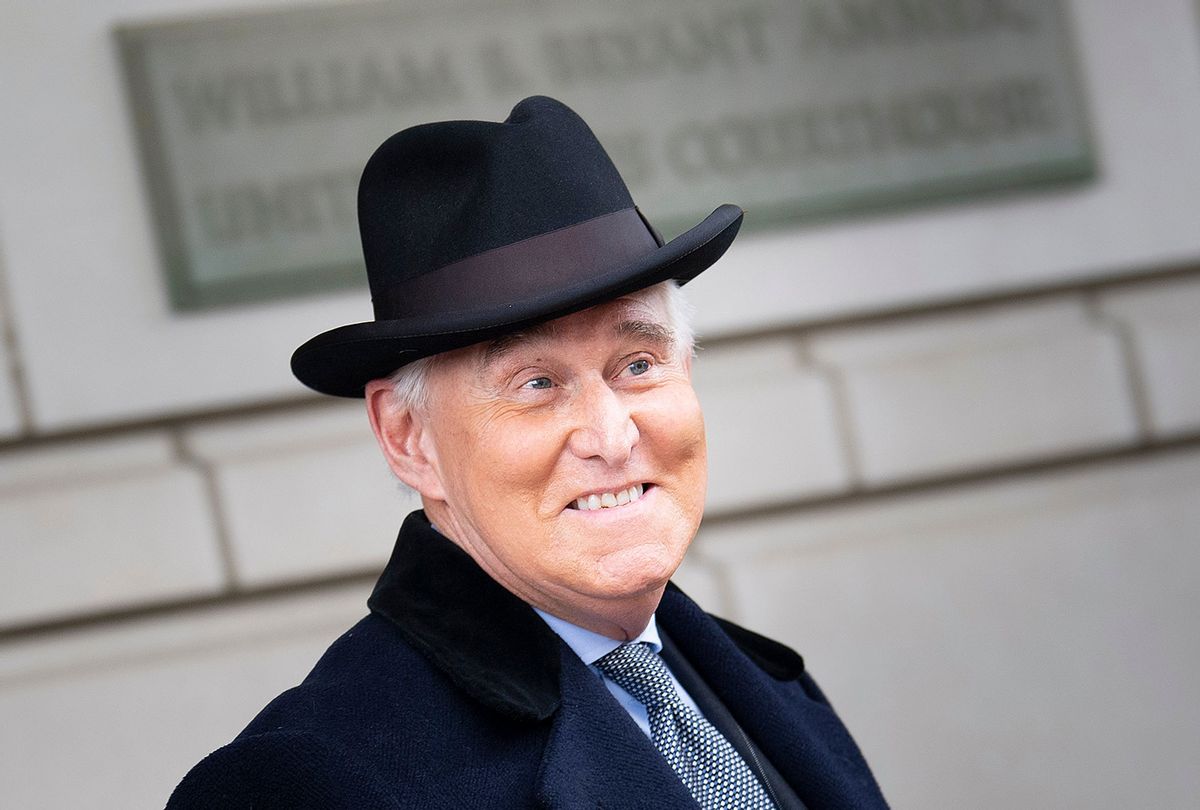 Roger Stone, the close ally and informal adviser to Donald Trump, bragged on Monday that he had personally thanked the president for pardoning him last week.

"My wife and I both had the opportunity to thank the president personally for righting the injustice of my conviction in a Soviet-style show trial, which featured the epic bias of the judge who withheld exculpatory evidence from my defense, misconduct by the jury forewoman and substantial misconduct by the prosecutors," Stone told ABC News about his encounter with Trump on Sunday night. According to Stone, he ran into the president in passing while going to the Trump International Golf Club in West Palm Beach, Florida. He and his wife, Nydia Stone, were guests of Newsmax publisher Christopher Ruddy. Although the White House declined to comment on the matter, a source who was in the dining room — which had roughly 100 people in it — shared a picture of Trump interacting with Stone by patting the convicted felon on the shoulder.

Trump's decision to pardon Stone was not entirely unexpected. As Salon's Heather Digby Parton wrote after Trump commuted Stone's sentence days before he was supposed to report to prison in July. Stone had intimated in an interview with journalist Howard Fineman that he could "play Judas" against Trump. "I think we might have expected a full pardon, but since there was reportedly so much resistance within the administration, Trump may have decided that commutation before the election, and then pardon afterward looked like a reasonable compromise," Parton wrote.

There is no evidence to support any of Stone's claims about supposed judicial misconduct during his trial. Stone was convicted in November 2019 of obstruction of justice, witness tampering and making false statements. In February, Stone was sentenced to 40 months in prison, although he was able to achieve a number of delays when it came to actually being incarcerated.

There is some debate within the legal community about whether accepting a pardon constitutes an admission of guilt. In the 1915 Supreme Court case Burdick v. United States, the court wrote that a pardon "carries an imputation of guilt; acceptance a confession of it." President Gerald Ford later used this quote to justify pardoning his predecessor, President Richard Nixon, who was facing criminal charges related to his involvement in the Watergate scandal. Yet pardons do not legally establish that a person is either guilty or acknowledging guilt, with President George H. W. Bush famously pardoning former Secretary of Defense Caspar Weinberger because he believed that official's conviction in the Iran-Contra scandal had amounted to "the criminalization of policy differences."

Salon spoke with Stone in 2017 about his alleged connections to Russia, during which he adamantly denied any contact or coordination with Russians involving the 2016 presidential election. When this reporter asked Stone, after the political operative was the victim of a hit-and-run, why he had sent him a text message saying that he suspected it might have been perpetrated by someone who did not want him to testify about the Russia investigation, Stone insisted that there were a number of "false statements" by members of the House that he wanted to correct.

Stone is also an inflammatory figure because of his association with radical right groups and causes. In 2018 he was photographed flashing an allegedly white supremacist hand signal with members of the Proud Boys, the same radical right group that Trump encouraged to "stand back and stand by" during one of his debates with President-elect Joe Biden. Stone told this reporter at the time that "we reject the claim that is a symbol of bi[g]otry and we specifically denounce White Supremacy." In September Stone urged Trump to declare martial law if he lost the 2020 presidential election and has subsequently taken a leading role in "Stop the Steal," a movement that accuses Democrats of stealing the election from Trump despite being unable to prove their claims.

The Trump campaign has lost 59 of the fraud-related cases it has brought to court (some presided over by Republican and Trump-appointed judges), only winning a case that involved a procedural question. Trump's own attorney general William Barr admitted after investigating voter fraud accusations that there was no reason to believe Biden had not legitimately won the election. The Supreme Court also unanimously found that Trump's fraud claims have no merit, three of whom were judges appointed by Trump himself.

Salon reached out to Stone for this article but he declined to comment.