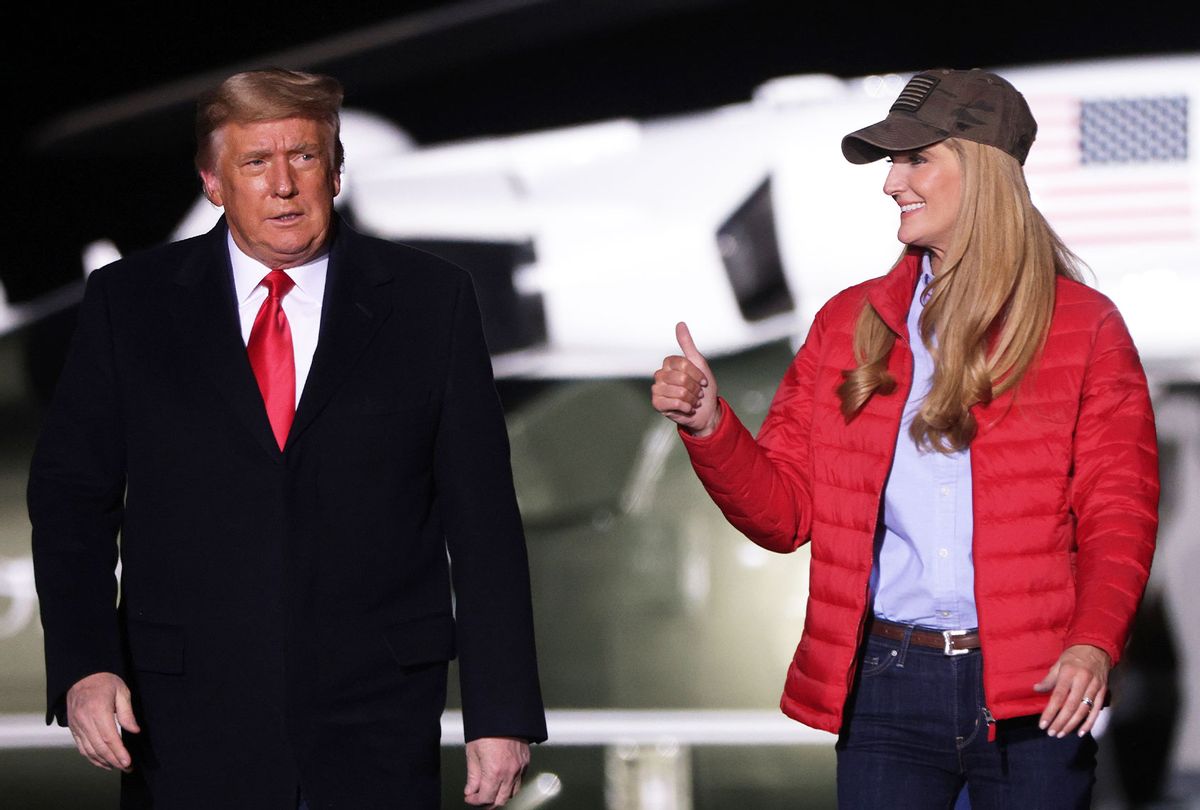 In a mildly healthy society, Donald Trump should have been scared to death to set foot in Georgia Monday night. Just the night before, a tape was leaked of Trump calling up the Georgia secretary of state, Brad Raffensperger, and demanding that he "find 11,780 votes" — Trump's mob speak for cooking the books — in order to steal the state's election from the true winner, president-elect Joe Biden. It's literally one of the worst scandals in American history, far worse than Watergate. This is a sitting president demanding that an entire state's election be illegally thrown out, all because he doesn't like the outcome.

Trump should have been afraid to face crowds of the very same people whose votes he wished to throw in the trash bin. Instead, he was greeted by an adoring mob that cheered repeatedly as Trump insulted their state for an hour, claiming it was a "rigged election" and encouraged them to boo and hiss state officials for being unwilling to risk prison time by committing election fraud for him. In fact, the audience at the Trump rally was so on board with his vitriolic attitude towards Georgians that they largely elected not to wear masks, voluntarily exposing themselves to a deadly pandemic to show their devotion to Trump.

This display was a suitable cap to the past two months, with Republican politicians competing with each other in a grotesque competition to be the most fascistic and sociopathic, all to honor their fallen leader, Trump. (Not that they'll admit he's fallen.) And no where has this been more evident than in Georgia, which is holding a Senate runoff election Tuesday between two incumbent Republicans, Kelly Loeffler and David Perdue, and their Democratic opponents, Raphael Warnock and Jon Ossoff.

Whatever the election outcome is after the polls close on Tuesday, this election has demonstrated beyond all shadow of of a doubt that the rot that has infected the Republican Party has completely overtaken the organism. Every tendril of Republican politics, from the White House to the homes of ordinary voters, has putrefied and grown toxic with loathing for their fellow Americans and for democracy itself.

Loeffler and Perdue are definitely vibing the anti-democracy, pro-coup mentality among the voters who, ironically, they need in order to win a democratic election. Prior to Monday's rally, both candidates came out in favor of Republicans objecting to Congress certifying Biden's win on Wednesday. The stated reason for the objection is "concerns" about "fraud", but of course, no one bought that lie even before Trump was caught on tape begging Raffensperger to alter vote totals in Georgia. No, it's obvious that both candidates believe that earning the support of conservative voters means coming out against democracy. The reactions of the Trump rally crowd, which cheered for coup talk and grew bored of democracy talk, only confirms that Perdue and Loeffler are probably guessing right.

Not that anyone is surprised. Both Perdue and Loeffler are wholly loathsome individuals, giving Trump a run for his money in the contest of who can be the worst possible person in politics. Both candidates have been soundly accused of profiting off the coronavirus pandemic, using insider knowledge gained from their roles as senators, knowledge that allowed them to understand the severity of the pandemic before most Americans and subsequently make profitable stock trades on it. And that's just the tip of the iceberg when it comes to the sheer amount of insider trading both have been accused of engaging in. In addition, Loeffler has another layer of corruption, involving her and her husband's involvement in setting off offshore financial exchanges that look an awful lot like an effort to dodge both taxes and financial regulations in the U.S.

The campaigns, however, has made these two villains eviler, as they desperately pander to a conservative voting base that is assumed to favor candidates who show the most contempt for common decency.

On Monday, Salon's Roger Sollenberger exposed how Loeffler's campaign has been running Facebook ads darkening the skin of her opponent, Warnock, who is Black. This is just the latest move in a series of grotesquely racist gestures made by the Loeffler campaign. For instance, as the Atlanta Journal-Constitution reported, Loeffler gave an interview to a "TV pundit associated with white supremacy and Nazism" and supported the newly-elected Rep. Marjorie Taylor-Greene, a QAnon devotee with a long history of racist comments. Her campaign has run ads linking Warnock to footage of burning buildings, playing on racist tropes equating civil rights activists with rioters. Her race-baiting is so out of control that WNBA players, both on the Loeffler-owned Atlanta Dream and other teams, have been protesting Loeffler for her disparagement of Black Lives Matter protesters.

Perdue has gotten less attention but has been competitive in this race to the bottom, beginning with his refusal to even debate Ossoff. In recent days, his boot-licking of Trump has become almost comical. On Monday, Perdue went on Fox News to call Raffensperger "disgusting" for taping the phone call with Trump, treating as somehow self-evident that the bad guy is not the one trying to strong-arm election officials into committing crimes but the guy who blew the whistle. This makes sense, one supposes, if the prior assumption is that democracy is bad and that anyone who gets in the way of an authoritarian dictatorship is the enemy.

That Raffensperger looks good next to these clowns shows how thoroughly corrupt the Republican Party is. Raffensperger is not, by any stretch of the imagination, a good guy. He's as committed as any Republican official in the country to racist voter suppression and has advocated for laws to make it as hard as possible for people, especially Black people, to vote. He's so anti-voting that, just a few days ago, he put out a press release threatening criminal penalties to anyone who tries to make it more pleasant (usually with food and water) to stand in the long lines caused by Raffensperger's diligent voter suppression tactics. After all, boredom, hunger, and thirst are some of the weapons most valuable to Republicans like Raffensperger in their war on voting.

But such is the state of the current GOP that Raffensperger is the least bad of them because at least he's not interested in playing along with the lie that an election he ran was fraudulent. For that, Raffensperger is incredibly rare in his party.

It's tempting to see all this rot as a top-down phenomenon, the result of a few corrupt leaders, like Trump, imposing their corruption on the party. But the disturbing reality is that, while Trump is definitely leading the charge, this is only happening because everyday voting Republicans are themselves thoroughly corrupted, having turned against democracy out of a rage at having to share the franchise with people — especially people of color — they don't see as "real" Americans. Washington Post reporter Dave Weigel has been on the ground with Republican voters, and his observation about the situation is bone-chilling:

The most revealing question I ask voters is simple: "Who do you think will be president on January 21?" And I have not met a Republican voter who says "Joe Biden." https://t.co/eILNUr2pEH

There's no point in being delicate about this: The belief that Trump is the "real" winner of the election depends on believing that the votes of Black people shouldn't count.

From the minute the polls closed in November, Trump and his allies have been targeting cities with large Black populations — such as Detroit, Atlanta, and Philadelphia — and declaring that those votes are "fraudulent" and should be thrown out. This isn't subtle, but it is effective. Racism is the beating heart of the modern Republican Party. It's what moves the voters and why the leaders have become so thoroughly corrupted.

It also means that there's no easy solution to the problem. Perdue and Loeffler are not well-liked by anyone. Even their own voters are grossed out by all the insider trading. But they may win anyway because white conservative Georgia voters simply cannot abide by the idea that candidates supported by the majority of Black voters might win. It really is as simple as that, and everything else — including the growing support for Trump's coup — flows from that. Because Republican voters don't want democracy if they have to share it. And the rancid smell wafting off the Georgia election is the direct result.