At the pandemic's start we tried to cook well. A year in, Joanna Gaines makes us feel better about semi-homemade 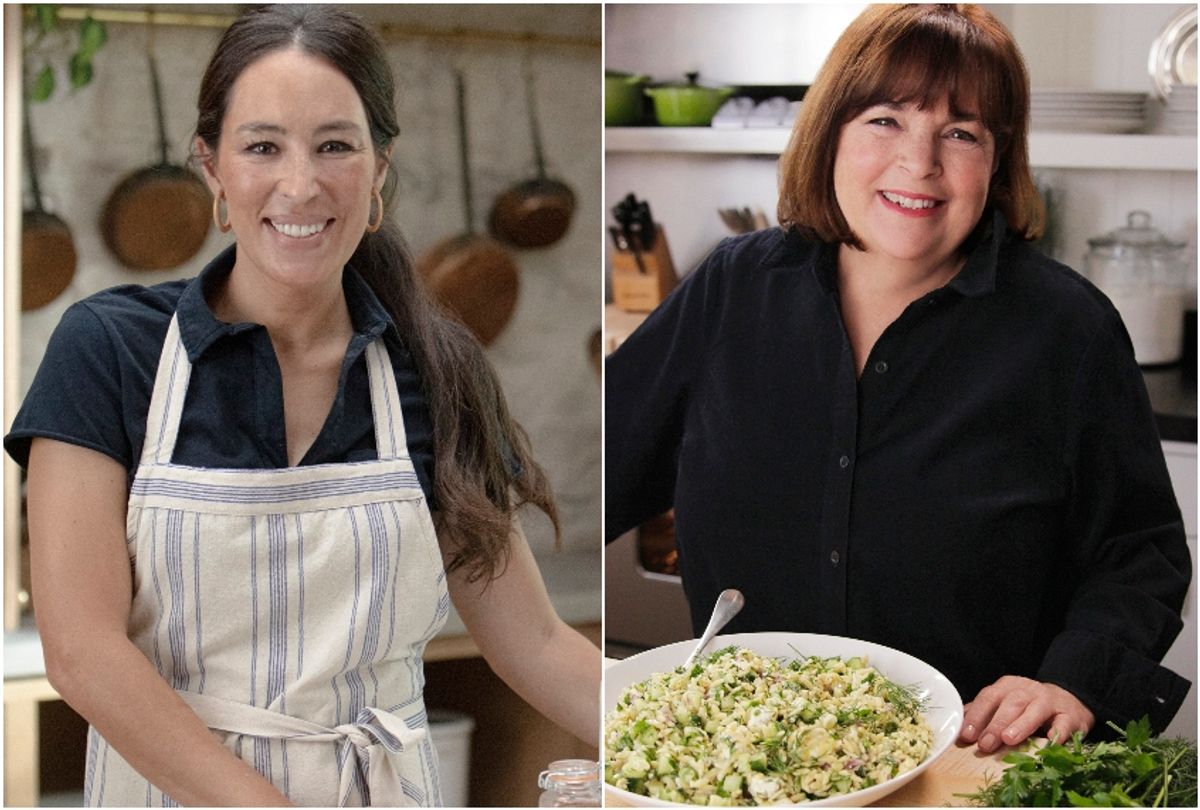 "So, what are we stress eating today?"  Varieties of that question circulated on Twitter this week, as they have for the past five years during our collective anxiety spikes. Countless millions ate to cope Tuesday night as the nation watched Georgia's run-off election results come in on Twitter, and again on Wednesday as domestic terrorists stormed the Capitol to disrupt Congress confirming Joe Biden's election victory (again).

Jokingly or deadly serious, we listed or confessed our makeshift menus: starches processed every which way. Cheese, any kind, double points for the kind in a can. Chocolate, bacon, butter, frozen you-name-it. We're sliding all that and more into our bellies in a quixotic effort to plug whatever holes dread has torn there, the type you can't see but definitely sense.

Eating, we can do. We are doing it – a lot of it, and with numb enthusiasm.

Stress cooking is another matter. There are those who react to historic malevolence by channeling our unease into assembling ingredients and whipping egg whites into meringue, but they are few. For the majority of us there are cans, jars, takeout and our couches – and better still, there's the vision of cooking, glorious cooking, brought to us by TV.

Discovery's new streaming service Discovery+ also debuted this week, and as I observed on Tuesday, why it didn't blare the fact that it has many seasons of Ina Garten's cooking show classic "Barefoot Contessa" available to stream is beyond me. Even apart from what this week had in store for America, Discovery's executives are fully aware of Garten's recently minted status as one of America's greatest pandemic pleasures.

Its promotion of Joanna Gaines' new cooking series "Magnolia Table" is more understandable given that show's true purpose. Gaines' in-the-kitchen debut doubles as an introduction to the Magnolia Network, her and husband Chip Gaines' lifestyle channel now previewing on Discovery+.

America knows and loves Joanna and Chip Gaines as domesticity engineers, first introduced by way of their hit HGTV show "Fixer Upper." Through that series the couple tapped into the near-universal pull of the simplicity of home and family, or even better, the attainability of the former through pluck and renovation.

In "Magnolia Table" Joanna Gaines' aim is more modest, in that she wants us to feel better about middle-of-the-road adequacy, emphasizing ease above all. Garten wants her audience to aspire to saute chicken breasts in cognac. Gaines knows that any parent who is able to pull off a dinner that's a step above frozen fish sticks deserves applause, and her concepts can help them with that.

Likewise, she doesn't want her recipes to be so complex as to leave the comfort eater too dispirited to ever want to put down that party-sized bag of chips.

"There's a fine balance between perfection and crap, and I'm trying to find the middle place," Gaines says as she cuts out the filo dough layers to make a baklava. "We don't want things to be so perfect that you don't have fun."

Garten, like Dionne Warwick, became one of America's favorite aunts in 2020 owing to her Hall-of-Fame April Fool's Day Instagram post where she jokingly (or possibly not!) mixes a pitcher full of Cosmos and pours it into a gigantic martini glass.  "It's always cocktail hour in a crisis!" she quipped in the comments, tacitly acknowledging the unease produced by the lockdowns called for in cities across the United States.

Long before the Gaines family stole the nation's hearts, Garten's lifestyle brand was its own queendom. If people didn't adore her in the heyday of "Barefoot Contessa" on Food Network, many more do now.  April was six months out from the release of her 12th cookbook, "Modern Comfort Food." That lake-sized cosmopolitan went viral with a purpose, kicking off one heck of a promotional spree.

Garten and Gaines are both reassuring and kindly, and a main reason people love them so much is that you want to hang out with them.  In the same way that Garten's followers fantasize about visiting with the TV chef in her spacious East Hampton, NY, kitchen as she preps a gazpacho with serene confidence, Gaines wears the demeanor of that nice friend you'd want to sit with you on the worst day of your life.

You just know she'll offer you a homemade biscuit and your own personal-sized goat to cuddle after fending off a rambunctious Chip with a quiet but fierce "not now" glare. And you know he'd comply.

She will never wield a similar level of culinary influence as Garten or Martha Stewart or Rachael Ray, and it's not as if she's aspiring to do so or even needs to try. To reiterate, she has her own network, and in her hourlong special "The Making of Magnolia Table with Joanna Gaines" she says in so many words that the main reason she has a cooking show is that she wanted one.

She also explains that her love affair with home cooking is rooted in her affection for her mother's recipes, which were easy to make and used ingredients typical of households with tight budgets, including hot dogs, a regular feature of childhood dinners.

The "Magnolia Table" host says her mother would chop up a bunch of franks, coat them in Korean spices, toss in some green onions and serve them with kimchee and rice. Gaines still serves this dish to her kids because they love it, and because to her food is about the story and the tradition, not the elaborate ingredients.

"I really want to be as serious as I can be and do an entire episode on hot dogs and rice, just for the write-up," she said with a laugh. "I can't wait for people to be like, 'This clown has her own cooking show!'"

None of this should invalidate the value of Gaines' program. On the contrary, experiencing this battering week solidifies my realization that "Magnolia Table" serves a similar purpose to Garten's shows, which is to console us, educate us and maybe, after a few doses, coax us out of our defeated repose to make a nourishing meal. Same pharmacy, different anti-depression drugs.

Nearly a year into this pandemic, and before the recent coup attempt was imaginable for most people (but not all), we were already extremely exhausted and feeling financially insecure. Parents are worn out. Everybody's frazzled. Hot dogs and rice doesn't sound so bad right now, does it?

In case it does, we have Gaines' straightforward baklava prep, her casually constructed tiramisu, her no-nonsense version of fatayar, a Lebanese meat pie: canned biscuit dough rolled thin and filled with shredded cheese and potatoes and ground meat. She describes it as a cheeseburger in a pastry. Now that's good stress eating.

If she weren't extremely warm, genuine and, more than this, conscious about coming across as genuine no amount of gorgeous shots of copper cookware against white marble countertops would make this work. But that is the crazy magic of Gaines. She's so casually chic and gosh darned nice that the mediocrity of "Magnolia Table" is beside the point. Every episode conveys the message to relax, toss something together that tastes good and everything will be OK.

I say all of this to praise the deliberate construction of "Magnolia Table" and the way it simultaneously honors, complements and rebels against its predecessors, including Garten's.

But Garten's shows still serve a sedative purpose, aside from teaching us how to cook well and removing any intimidation from preparing haute cuisine or even basic dishes like roasted chicken. They are the antithesis of boring, and they will also calm you the hell down. Double win.

Subtle displays of her wealth, on view in the form of her enviably grand and expansive kitchen and her manicured backyard, are part of the reverie, as are the mouth-watering camera shots of fresh ingredients and beautiful meal presentations. My Tuesday night stress-watch sent me to a classic episode where she tranquilly mixes up a chocolate cheesecake, the lens tightly capturing every silky moment as she blended cream cheese into chocolate and baked up the graham cracker crust.

Would I have loved to eat everything she made? You bet. Watching it was just as soothing and seductive, helping to dissolve the band of stress squeezing my brain.

Besides, I didn't have most of Garten's ingredients on hand or the desire to engage in anything requiring that much effort.  The components for Gaines' fatayar were in my fridge, but I ended up passing on that too. Instead I make a pizza from scratch – dough, sauce, and whatever toppings we had in the fridge. The activity busied my hands without taxing my limited energy, and the result was satisfying and didn't slide off my plate while I ate it in bed.

In the final judgment, this is the higher service shows such as these render in times of need: providing comfort and inspiration in a gentler way than baking competitions could ever do. Those subliminally add unnecessary layers of expectation to the notion of homemaking, implying a high standard that feels impossible to maintain if not obtain without adequate resources, or the expectation of flawlessness enacted with ease.

Much as I adore "The Great British Bake-Off" I can no longer throw together a basic cookie dough without picturing Paul Hollywood's steely blues boring into my soul and judging me . . . whereas Garten invites us to be a guest in her process, advising us but also assuring us that it's OK to relax, that store-bought is fine

What Gaines offers is just as necessary, especially right now, which is that the effort counts as much as the execution, if not more. That nobody's perfect, not even her. That in these harried times, good enough is fine . . . and that putting even minimal effort into what you're stress eating may be its own comfort.