I found solace in scream hotlines (and you can too)

Since its launch in November, Just Scream! has received 20,000 messages from people, well, just screaming 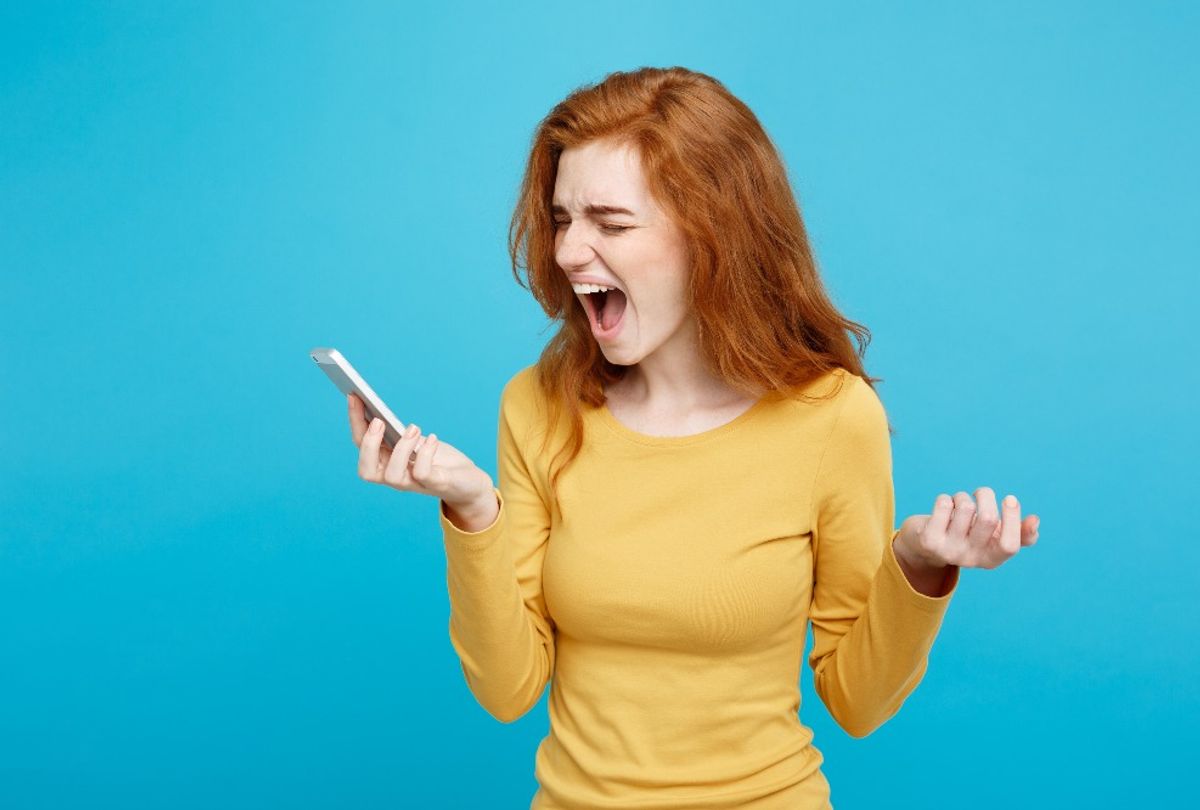 A woman screams into her phone (Getty stock photo)
--

In the 1957 musical romantic comedy "Funny Face," Audrey Hepburn plays Jo Stockton, a shy bookstore employee and amateur philosopher who is discovered by photographer Dick Avery, played by Fred Astaire. The two have a gentle love-hate relationship and end up in a spat at a bohemian club where Dick looks overdressed in a roomful of men in tight striped shirts, while Jo is the epitome of chic in black cigarette capris. Before launching into an iconic dance routine, Jo chides Dick for how his adherence to outdated social mores inhibits his expressiveness.

"As a matter of fact, I rather feel like expressing myself right now," she says. "And I could certainly use a release."

I distinctly remember first seeing the movie when I was probably 15, right at the height of adolescent angst, and that line resonated with me in a serious way; I had a whole bunch of emotions coursing through my body, and it seemed like they would always get stuck in the space right between my heart and throat. I, too, could have certainly used a release.

Eventually, I found ways to achieve it. I mean, we all do, especially as people living with big feelings in a society that often seems to prioritize android-like productivity, even in the face of both everyday and unprecedented stresses. Some of the tactics are a holdover from my teenage years, like listening to a mixtape (or Spotify playlist) that I designed to make myself sob at a later date, or going for a run that leaves my legs feeling like jelly. Some came with adulthood —having good sex, breathlessly laughing with someone you love in a crowded bar while nursing a bourbon, occasionally watching Pixar movies while high.

But for the past several months, all I've wanted to do is scream.

I'm not alone. Christopher Gollmar, the creator of the website Just Scream!, describes screaming as "part of the zeitgeist of 2020."  The concept behind Just Scream! is simple. Users are directed to a landing page with a phone number, which they are encouraged to call and leave an anonymous message where they just — well, scream. Since launching in November, just before the election, over 20,000 people have called in. He uploads the messages to a series of playlists daily.

"There are definitely repeat screamers," Gollmar told me over the phone, not screaming. "Now, it's all anonymous. I don't download the phone numbers or anything. But I recognize people's voices and some have distinct catchphrases. I get a number of messages, too, like, 'Oh, I'm calling once a week. Is that okay?'"

As I dig through Gollmar's scream playlists, I hear the repeat callers, too, interspersed with one-off screamers. Some issue a nervous giggle before or after they launch into their scream (most of those are categorized under the website's "LOL" tab) , but many are just so uninhibited. It made me consider whether I had ever actually screamed before. I mean, I know that I've kind of yelped in fear or pain, or loudly exclaimed in delight. A full-on scream, though? I don't think so. Wouldn't want to disturb the neighbors.

Psychotherapist Arthur Janov, who popularized "primal scream therapy" in the 1970s, would argue that the state of being is void of catharsis. While the efficacy of his methods have largely been debunked as sustainable treatment for anxiety or trauma — all release, no processing — they became popular with a certain celebrity set including the likes of John Lennon, Yoko Ono and James Earl Jones.

There's no denying, however, the idea is freeing, especially in times of deep stress, though it's not always considered socially appropriate to emotionally let loose in public. That's why I'm not surprised that Kelly Dobson, a researcher at MIT's Media Lab, once created a device called a ScreamBody, a polyurethane chamber that you wear around your body, almost like a backwards backpack. When you scream into it, it absorbs the sound of your despair.

There's a video circulating on YouTube of Dobson using the ScreamBody in 2007, and she introduces it by saying: "Do you ever find yourself in a situation where your really have to scream, but you can't because you are at work, or you're in a classroom, or you're watching your children? Well, ScreamBody is a portable space for screaming."

It reminds me of this summer's statement from the organizers of Fuji-Q Highland amusement park near Tokyo, in which they asked visitors to refrain from screaming on roller coasters to limit viral spread, and instead asked, "Please scream inside your heart." The request went viral simply because it so succinctly encapsulated how living through the stress of the pandemic and Trump presidency felt. All day, every day, we're just screaming in our hearts.

Months prior, another scream-related video gained online traction. A music teacher, who posts on TikTok under the name makeshift.macaroni, tells viewers in a 27-second video that "one of the best ways that I can process the whole transition to online learning and teaching is to write a song." That song consists of a few ukulele chords, and then just a full-on scream, followed by a quick cut to black. Pandemic Scream TikTok took off in its wake, with users posting similar videos.

Across the globe, therapist Zoe Aston and Visit Iceland, launched "Looks Like You Need to Let It Out," a website this summer where users could record a scream and then select a remote Icelandic vista for it to play over.

"Part of the beneficial effect of screaming comes from being able to make a loud noise into a wide, open, undisturbed space," Aston wrote on the site. "This literally allows your amygdala to release the stress stored there and move forward."

Catharsis, both for the caller and listener, was a motivating factor for Gollmar in creating his project. People call in and talk about their relationships (one woman called in with three screams dedicated to three bad exes, for instance), about COVID, about everyday stress.

"There's a sense of, 'I just got to get this out there,'" Gollmar said. "I think that's why there are so many screams with laughter, too. People call in and scream and then they're like, 'Oh my goodness, I just did it.'"

Listening back through the Just Scream! playlists, I could hear it on some of the calls — that palpable relief that comes after scream. The more I thought about it, the more I wanted to do it, until finally it had to happen. On Wednesday, as footage of alt-right rioters breaching the U.S. Capitol played on loop across my television and Twitter feed, I grabbed my phone and walked out to my car.

Shaking from the stress of the afternoon, I turned up the radio, dialed Gollmar's hotline number, took a deep breath and screamed. I needed the release.