My mistake: M. Night Shyamalan's "Servant" is actually a comedy under the impression it's a thriller 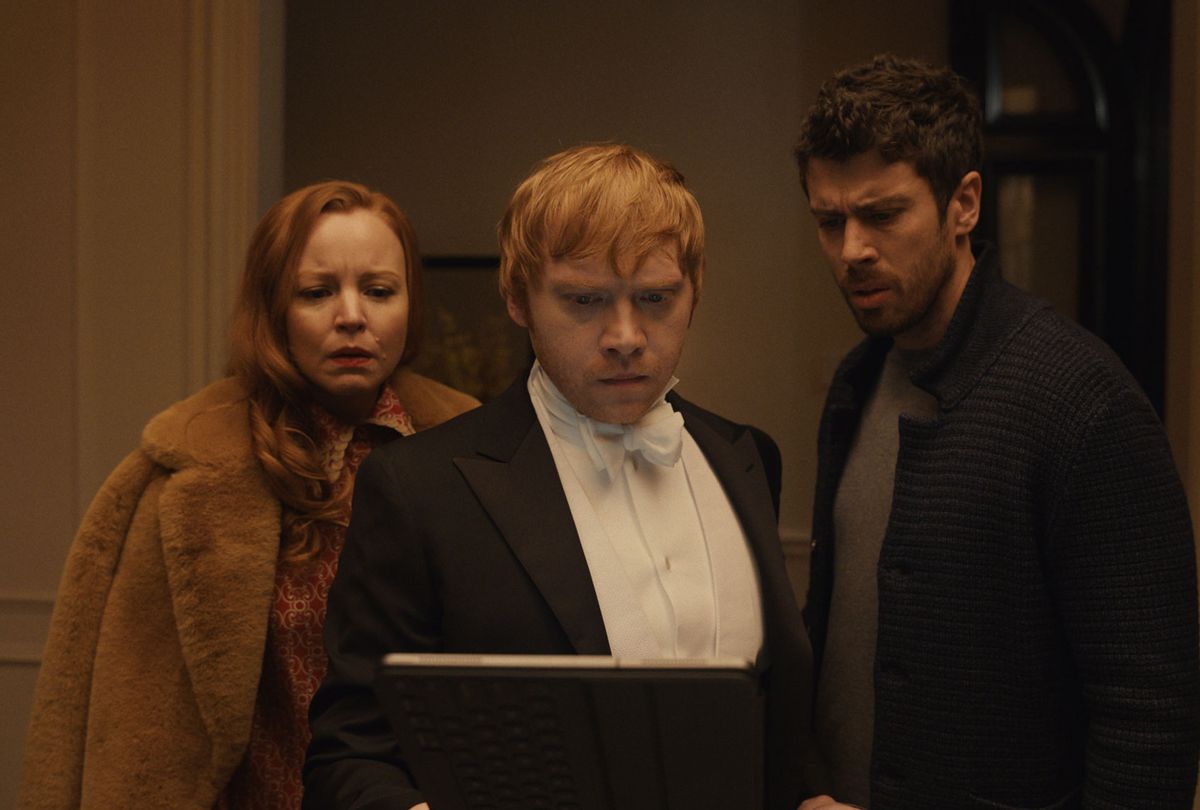 Spoiler alert: This review includes a detailed description of plot details from the first season of "Servant." If you don't want to be spoiled, stop reading now.

For more than a week now America has had a front row seat to white nonsense in sundry forms. Whether it's government officials preaching unity by way of driveway-shoveling or relatives downgrading the white supremacist attack on the Capitol that left five people dead to an expression of everyday folks exercising their First Amendment rights, we are soaking it in as a nation.

Fellow citizens who aren't white have contended with this special brand of nonsense for all of their lives, so to them this massive eruption in Washington D.C. is nothing new. But for people who claim to be hitherto unaware of its existence or unsure of what exactly qualifies as white nonsense (which is white nonsense in itself), allow me to quote Supreme Court Justice Potter Stewart's 1964 statement on the meaning of obscenity.

"I shall not today attempt further to define the kinds of material I understand to be embraced within that shorthand description, and perhaps I could never succeed in intelligibly doing so," Stewart said as a lead in to the pertinent part of the statement: "But I know it when I see it."

White nonsense generally describes behavior that combines idiocy, delusion and aggressive self-importance. In many respects it's similar to "white people s**t," but not entirely one and the same.

Exhibit A: Jenny Cudd, the proprietor of Texas-based Becky's Flowers (!!!) who recorded herself giddily confessing she had broken into the Capitol building and then posted said video on social media. That there is high level white nonsense.  If her reaction to the FBI showing up at her door was any shade of, "Moi? But whyeeee?!" That is also white nonsense.

The fact that she took time off from operating her business to participate in an insurrection against her own government is basic white people s**t. Generally the s**t begets the nonsense, a notion amply demonstrated in shows like "Tiger King". But there are also times when the fictional white nonsense wonderfully exists apart from any specific type of s**t, as we enjoyed in "The Undoing."

Horror flicks and thrillers are almost entirely built on white nonsense too, which is why many of us laugh our asses off while watching them. And once I began viewing "Servant" through that lens, it finally clicked for me that Tony Basgallop's creation, executive produced by M. Night Shyamalan, is actually a dry white nonsense comedy (we're talking midwinter ashy dry) masquerading as an earnest creep show.

Plenty of viewers found the bewildering case of Philadelphia couple Dorothy (Lauren Ambrose, "Six Feet Under") and Sean Turner (Toby Kebbell) to be eerie enough in its first season, mind you, although they may have been bamboozled by the superior acting. That Ambrose and Kebbell are performing their hearts out alongside Rupert Grint, who plays Dorothy's smug brother Julian, is indisputable.

Regardless of all that, there is something about the appearance and season-ending disappearance of their au pair Leanne (Nell Tiger Free) and infant son Jericho that rocked some people to the very core. In any case, "Servant" wigged out enough of an audience to scare up a third season, which Apple TV+ announced prior to this week's second season premiere.

But if you, like me, were not knocked over by the bizarre misadventures of Sean, Dorothy and Julian maybe you'll get a jolt out of the white nonsense at play in these new installments. Prevalent as it was before, the second season blows it up to the magnitude of a kaijū capable of leveling cities. You can't fail to notice it.

As a reminder: Sean is a chef and self-described "professional bon vivant," yes he says those words. Dorothy is a TV reporter who goes a little mad after her flesh-and-blood infant son dies tragically. They love fancy foods and good wines, and their home looks like a spread in Elle Décor.

When we first meet the couple Dorothy is treating a ghastly looking doll as if it is real, and everyone goes along with it, including Leanne. But then – hey-o! – the doll is suddenly replaced by a real boy not long after Leanne settles in. Nobody knows what to make of the instant infant except for Dorothy, who goes along with this miraculous white nonsense because she's touched in the head.

Bur Sean and Julian rightly view Leanne as suspect, which, fair enough. The girl looks like she strolled into their million-dollar Philly brownstone straight out of "Children of the Corn." Strange things begin happening to Sean, though, including a spontaneous loss of his sense of taste – and all that is before Leanne's mud-covered Uncle George (Boris McGiver) drops by for a visit.

More bewildering white nonsense transpires, whirling to an apex when Leanne and George disappear with an eccentric aunt wielding a death stare . . . and so does living Jericho, replaced by a doll yet again.

Much of the white nonsense in "Servant" is baked into the dialogue and situational settings. In a moment of suicidal despair over Jericho's vanishing Dorothy admits she would hang herself "with my Hermès belt next to his crib," which . . . is quite precise.

The same goes for Sean stress-eating prosciutto while hiding in his wine cellar – as one does! – or angrily shoving artisanal pizzas into the wood-fired oven that comes standard with the "professional bon vivant" package.

Another common characteristic of white nonsense entertainment is that non-white bystanders are often forced to patiently bear it. In "Servant" Dorothy's best friend Natalie (Jerrika Hinton), the person who first gave her the doll, is called upon to pacify Dorothy when she reacts to Jericho's re-vanishing by going on a rampage.

When a Latinx cop shows up Natalie is there to talk the officer into standing down. Good thing because even at her calmest Dorothy exhibits extreme Karen behavior – screaming at the help, accusing her beaten-down husband of not being a good father and, as mentioned above, yelling at the cops.

It keeps going! A Black private investigator (Phillip James Brannon) is placed in harm's way, recovers from that, and accepts money again to help enable a scheme that is pure uncut white people s**t . And this leads to nonsense that forces Sean's assistant chef Tobe (Tony Revolori) to do dangerous labor that is not part of his job description. Why? Because Julian, who is supposed to undertake the suspect mission, shows up in a tuxedo and tails.

At the local TV station Dorothy's Black co-anchor can only shake his head in horror as she returns to fill in for a colleague and reads the headlines in full ga-ga-goo-goo mode, hoping that the lost baby that is definitely not hers will recognize her voice. Because if there's one thing country-fried cults are really into, it's encouraging babies to watch the local news.

"Servant" vibrates with such luxury brand histrionics, all of which undercuts the story's escalating supernatural queerness. True to Shyamalan form Leanne has powers that have yet to be fully explained, but between their unpredictable appearances and the return of Screaming Dirty Uncle it's all .  .  . a whole lot.

The thought of jumping into this Olympic-sized pool of white nonsense may not be tempting for anyone drowning in the reality of it, and as I implied it takes a conscious paradigm shift to enjoy "Servant" as a laugh riot.

But if you're committed to sitting through these new episodes, it may be helpful to recall Eddie Murphy's classic bit expressing bewilderment over "Poltergeist" and "The Amityville Horror."

"I got a question," he deadpanned. "Why don't white people just leave the house when there's a ghost in the house? . . .  And not only did they stay in the house with the poltergeist, they invite more people over!"

Murphy riffs on before he imagines his reaction. "I would've been in the house saying: 'Oh baby this is beautiful,'" he says. "'We got a chandelier hanging up here, kids outside playing. It's a beautiful neighborhood . . . I really love it, this is really nice.'"

Then he switches to an unsettling whisper: "Get out!"

"Servant" is not a ghost story in the classic sense, unless you want to count inconsolable grief as a malevolent spirit. Even then, its stylized ridiculousness robs it of any tension or fright, and that leaves us with questions similar to Murphy's. Why don't we leave this house? Why are they inviting more people over? Why am I laughing at this? The answer is the same in every case: because this is top shelf white nonsense. You can only truly get that once you see it.

New episodes of "Servant" premiere Fridays on on Apple TV+.