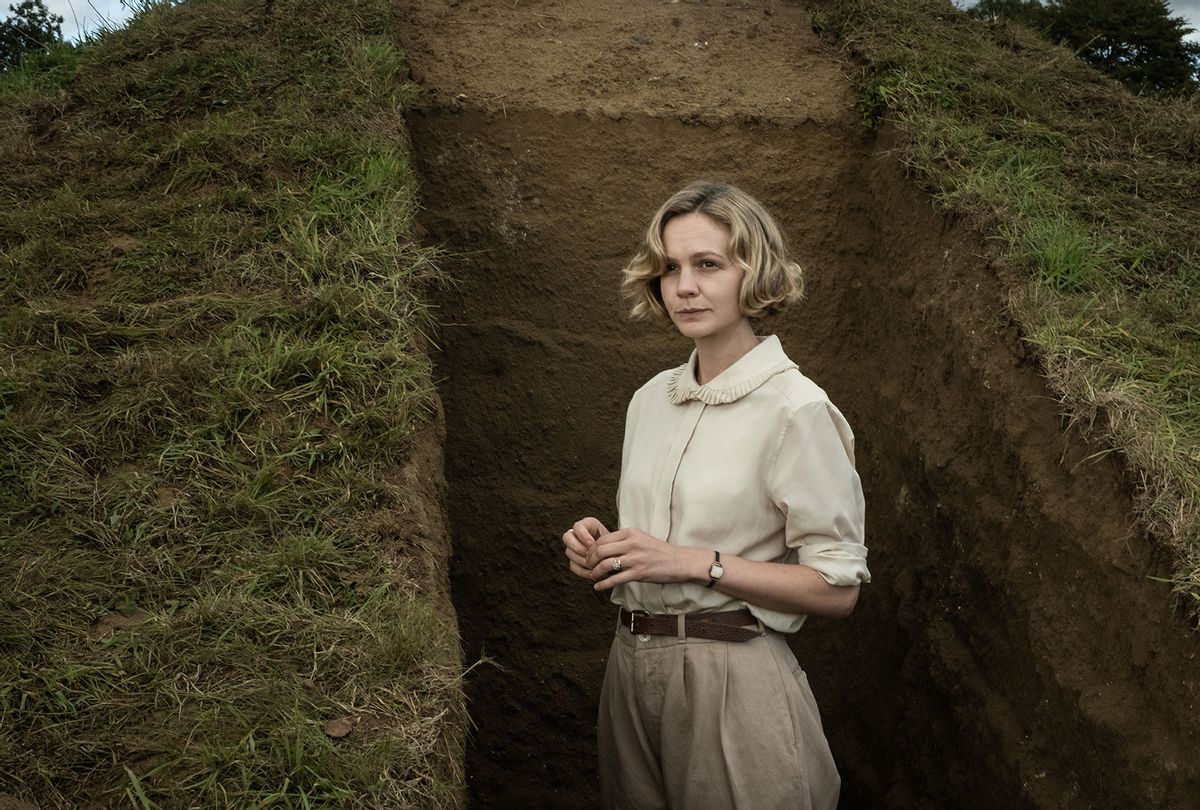 Archaeology is a way of looking at the past in the present to understand the future. "Life is revealed; that's why we dig," says Basil Brown (Ralph Fiennes), the main excavator in 1938 at Sutton Hoo, in Netflix's classy historical drama, "The Dig." The film directed by Simon Stone ("The Daughter") is based on a true story. Screenwriter Moira Buffini ("Harlots") adapted John Preston's novel.

Basil has been hired by Edith Pretty (Carey Mulligan) to do fieldwork on her property. She entrusts him, it seems, because he is both humble and honorable. His initial efforts on her property yield little, but then Basil unearths the oval burial mound (the rest were circular) and discovers something spectacular — the remains of a ship that may be Viking or, Basil suspects, Anglo-Saxon.

"The Dig" is ingratiating as the crusty Basil and the upper-crust Edith bond during the excavation. They both claim to have been interested in archaeology since they were "old enough to hold a trowel." He talks about his hunger to study, and she regrets her father denied her the opportunity to attend university. There is a class difference between them, but there is also a mutual respect. He appreciates that she insists he gets credit for his find. Basil even enjoys the company of Edith's young son, Robert (Archie Barnes), and promises to show the boy the cosmos through his telescope.

Stone uses this charming first act to establish the themes of money, credit, and death that shift into higher gear once Charles Phillips (Ken Stott), of the British Museum, takes over the archaeological site. He brings on a team that includes Stuart Piggott (Ben Chaplin) and his young, inexperienced wife, Peggy (Lily James), as well as John Brailsford (Eamon Farren). Rory Lomax (Johnny Flynn), who is Edith's cousin, also helps out, mostly taking photographs of the progress and finds.

As work continues, an accident, of course, leads to a tremendous discovery. As scenes depict the careful excavation of artifacts, viewers may think less about the historic ramifications of the treasure, and more about how much fun the film crew must have had in burying the precious items for the actors to uncover. Yes, the digging is more interesting than the lab work — which is what most archaeologists actually spend their time doing — and is also more cinematic.

Stone offers some visual beauty in the excavation scenes. Viewers can feel the heat of the blazing sun, or the rain, as Basil lays tarps or bails water. There is an incessant, but not irritating, score that helps drive some of the action. The filmmaker often employs voice-overs of characters talking to complement what is happening on screen, occasionally cutting back and forth between storylines to keep the action nimble. These efforts mostly pay off as "The Dig" mines its drama from soapy storylines.

Peggy is frustrated that Stuart is more interested in spending time in the lab with John Brailsford than expressing any romantic interest in her. Meanwhile, she finds herself attracted to the dreamy Rory, who is called up by the RAF. In addition, Edith's state of health is as fragile as the archaeological site.

These subplots allow for discussions of death and the value of appreciating the fleeting moments of life. Rory talks about his photos being a way of fixing history. Peggy appreciates the provenance of a coin she was given as a child, which is mirrored by a 6th century coin found at the Sutton Hoo site. And there are planes that fly over the site and news reports to remind folks that England is on the brink of war.

Eventually, the real focus of the find — ownership, value, and credit — is addressed. There is discussion of an inquest to determine who has the right to the artifacts, which have become a "national sensation." There is snobbery on the part of Charles Phillips regarding Basil's work on the site. In addition, while the local Ipswich Museum folks are keen to get the treasure, the British Museum is also willing to pay for the priceless artifacts. End titles reveal what transpired in real life, perhaps because it would be hard to depict what occurred on screen. At least the denouement addresses the film's theme of making something visible that has long been unearthed.

Stone juggles all these plots and themes with prudence, but there is a nagging sense that the film should have played up the importance of the Sutton Hoo find more. Even with the attention to Basil and Edith — Fiennes plays stubborn but proud, although Mulligan is more of a wispy presence than a fleshed-out character — it is odd that "The Dig" pivots to place so much emphasis on Peggy's personal life.

Surely, the film will spark far more interest in seeing the artifacts on display or learning more about the excavation than in caring about a supporting character's love triangle. Alas, "The Dig" is not a film for armchair archaeologists. It is more of a diversion for viewers looking for handsomely mounted period British melodrama.