Wretched David Bowie biopic "Stardust" should be launched into the sun 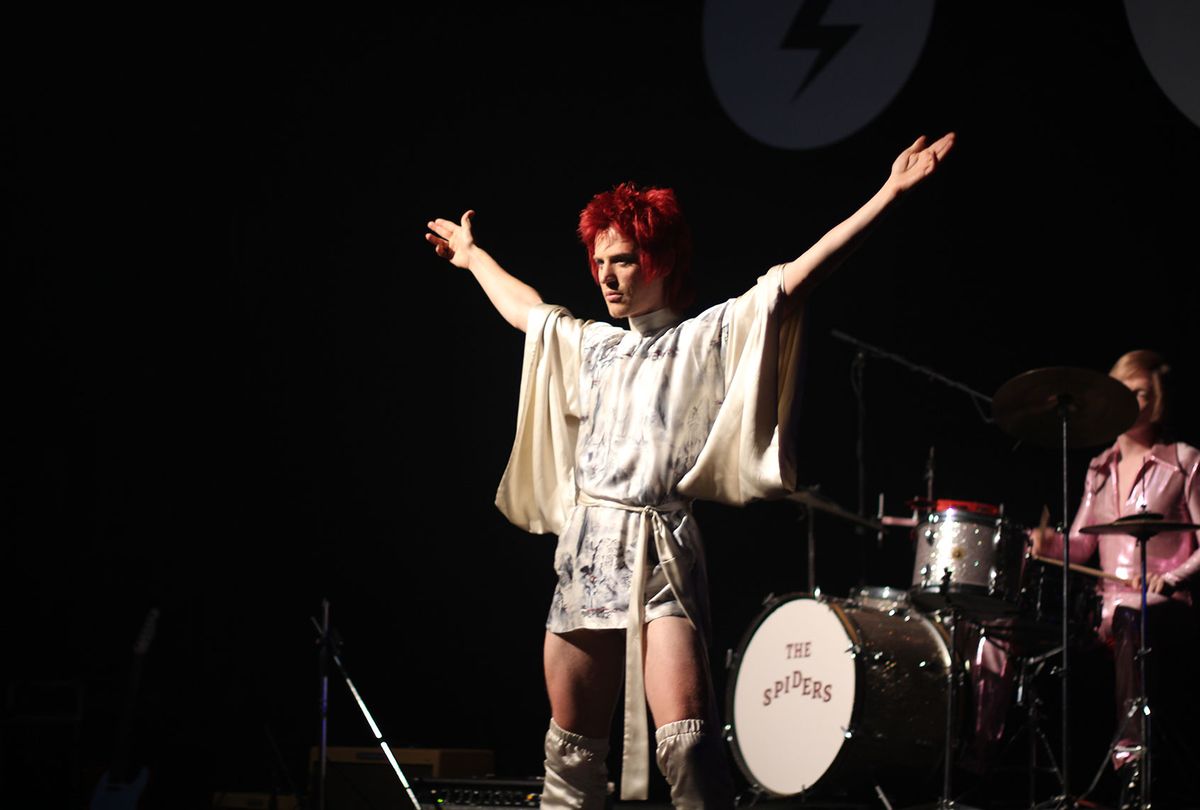 Making a David Bowie biopic — especially one that is admittedly, "mostly fiction" and doesn't feature Bowie's music — is a risky, no, completely foolish venture. However, Gabriel Range ("Death of a President"), the director and co-writer of "Stardust," believes that he can pull this trick off and doubles down on his limitations. The aroma of his flopsweat is unmistakable.

This ambitious drama is set mainly in 1971, focusing on the period where Bowie (Johnny Flynn recently seen as Mr. Knightley in "Emma.") is trying to gain some traction in the United States, and ultimately developed his alter ego Ziggy Stardust. The film opens with the performer arriving in Washington, DC, and getting delayed in customs. He is expecting to do a concert tour but is told he cannot legally perform. This setup shows the performer hamstrung, but "Stardust" presses on hoping to make the best of it. The film never does.

Much of the drama features Bowie's publicist, Ron Oberman (Marc Maron) — the only person who believes in Bowie (other than Bowie) — driving the rocker around the country in a wood-paneled station wagon. Ron arranges for Bowie to sing for vacuum cleaner salespeople or talk to DJs at family-oriented rock music stations in the Midwest. At one interview, Bowie performs an embarrassing mime act. Ron claims he is going to get Bowie on the cover of "Rolling Stone," which only makes the singer scoff. It is not until the two men give each other a reality check, around the midpoint of "Stardust," that the lackluster film generates any real emotion other than disdain.

The crux of the drama is Bowie's disconnection. His music is "too dark," which is why his record company does not support him. He also struggles with a family history of schizophrenia. Considerable time is spent depicting Bowie's relationship with his brother, Terry (Derek Moran), who is eventually institutionalized. (Flashbacks show the siblings listening to Anthony Newley in the car, which is its own disconnect.) Bowie fears going mad himself. A particularly clunky sequence features Bowie being interviewed by a reporter crosscut with him talking with Doctor Reynolds (Anthony Flanagan) about the family's history of mental illness.

This aspect of Bowie's life is neither uninteresting nor unimportant, but Range does not provide enough of a sense of Bowie at this point in his life to illuminate his fears. It's wise that "Stardust" focuses on this one year in the singer's life, but most viewers will see Bowie for what he will become, not who he is, and that actually does the story a disservice. Range is trying to be ironic and dramatic at the same time, and it backfires. Is the filmmaker really going for pity here?

There is a sketchy effort to establish Bowie's character and influences. Bowie's wife Angie (Jena Malone, a long way from "Antebellum"), talks about how they planned to shake up society and flout conventions, such as marriage. His penchant for androgynous heels and "men's dresses" is mocked. And his friend Marc Bolan (James Cade) insists he needs acid to "unblock." But these moments, like much of "Stardust" are didactic. Better is a scene where Ron explains Iggy Pop's stage persona to Bowie illustrating how to hold a young audience captive. But it is an episode when Ron tells Bowie that he wasn't talking with Lou Reed after a Velvet Underground performance, that captures the film's sole insight. Bowie responds that he doesn't care if the Lou Reed he talked to was a phony; the unreality is sometimes a better reality.

Range is gambling that the same will be true with Flynn's ersatz Bowie. But the charismatic actor (so good in "Beast") appears to be channeling Andy Warhol, not David Bowie. (When Ron and Bowie are in New York, the performer makes a pit stop at the Factory and does a screen test where he mimes some more. It is as painful as it sounds). Flynn plays Bowie as soft-spoken and enigmatic. As he takes everything in — the dingy motel rooms, the unappreciative audience — his expressions convey the obvious: he wishes this was better. It is hard not to have the same reaction to "Stardust."

What the film needs is some sex, drugs, and rock and roll. There is very little of any of that on screen. Angie kisses a woman, and Bowie screws a groupie in a shadowy room. There are few lines of cocaine snorted in addition to the aforementioned acid, but the headiest moment in the film is the opening sequence, which feels like something out of "2001." As for music, even without the Bowie songs, there is more Anthony Newley and Jacques Brel than T. Rex or Velvet Underground. The emphasis on mild, not wild, is very disappointing for a Bowie biopic.

Yet arguably the worst aspect of "Stardust" is Range's insistence on cudgeling viewers with the "Be Someone Else" message. It is repeated so often and in so many different ways that viewers may start shouting in vain at the screen hoping Bowie will finally hear it. It would be far more interesting to see a film about Bowie literally developing his Ziggy Stardust alter ego — the costumes, the music, the alien backstory — rather than being told to do so. This film is supposed to show how Ziggy Stardust was born. Instead, it feels stillborn.

"Stardust" is available in select theaters and VOD on Wednesday, Nov. 25.