In the search for answers on Capitol riots, officials and Congress begin looking in the mirror

Justice Dept. announces investigation into its own agencies, while members of Congress accuse each other 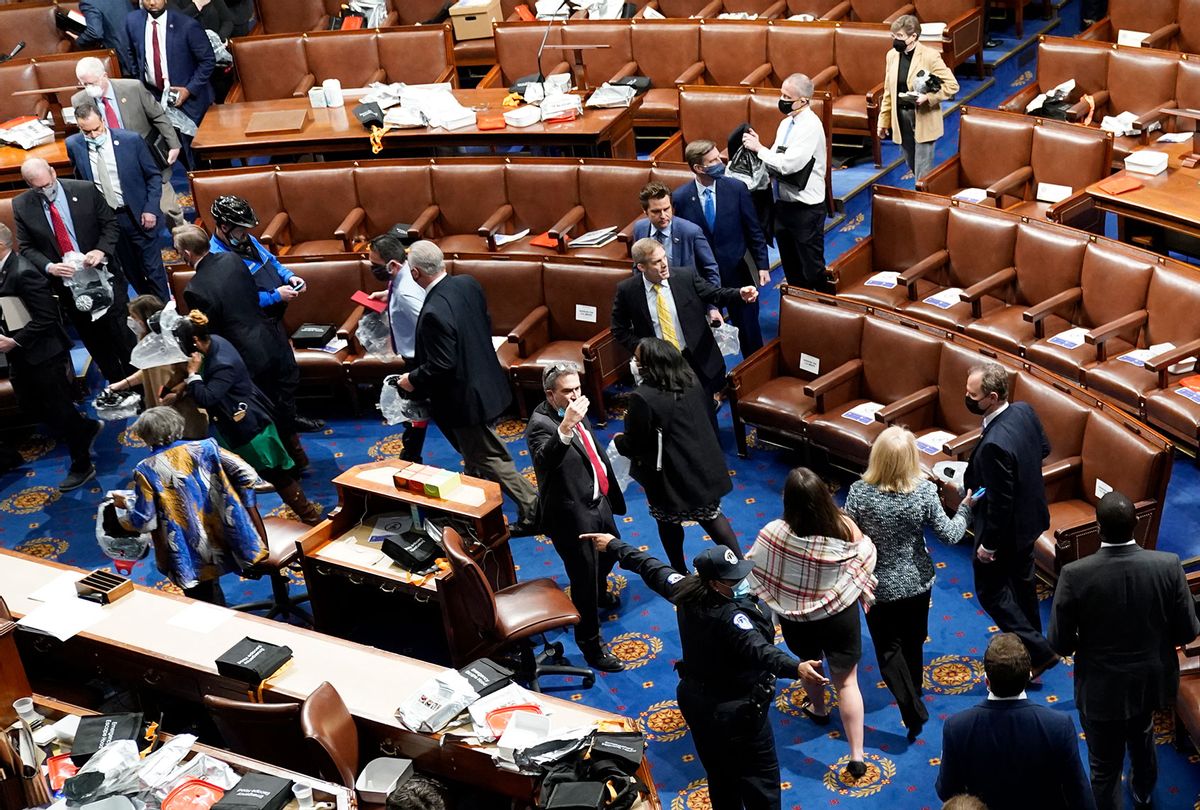 Members of Congress evacuate the House Chamber as protesters attempt to enter during a joint session of Congress on January 06, 2021 in Washington, DC. Congress held a joint session today to ratify President-elect Joe Biden's 306-232 Electoral College win over President Donald Trump. A group of Republican senators said they would reject the Electoral College votes of several states unless Congress appointed a commission to audit the election results. Pro-Trump protesters entered the U.S. Capitol building after mass demonstrations in the nation's capital. (Drew Angerer/Getty Images)
--

The Justice Department's internal investigator announced on Friday that it will look into how the DOJ and its various agencies handled last week's attack on the U.S. Capitol. That was only the latest in a growing number of inward-looking probes in the wake of the riots that left six people dead, including two Capitol Police officers.

The DOJ Office of Inspector General, the department's independent watchdog, says its investigation will examine whether and how information was shared in advance among authorities, and will sniff out any procedural or policy "weaknesses" that hamstrung agency responses. It will also likely examine any possible intelligence failures, including the FBI's admission this week that its field office in Norfolk, Virginia, distributed an intelligence bulletin warning that Trump supporters had been making "calls for violence" and preparations for "war" the day before the siege.

"As of 5 January 2021, FBI Norfolk received information indicating calls for violence in response to 'unlawful lockdowns' to begin on 6 January 2021 in Washington, D.C.," says the document, first published by The Washington Post. "An online thread discussed specific calls for violence to include stating 'Be ready to fight. Congress needs to hear glass breaking, doors being kicked in, and blood from their BLM and Pantifa slave soldiers being spilled. Get violent. Stop calling this a march, or rally, or a protest. Go there ready for war. We get our President or we die. NOTHING else will achieve this goal.'"

The head of the agency's Washington field office told reporters last Friday it had not received intelligence suggesting that Trump's supporters would act unlawfully. But after the Post published the memo, the agency chief acknowledged that it had been shared among the members of the Joint Terrorism Task Force, including D.C. police, the Capitol Police and other federal authorities. He suggested, however, that the information was not readily actionable: "That was a thread on a message board that was not attributable to an individual person."

As the chaos of the day slowly clears, several inspectors general have announced internal investigations into the events surrounding the attempted insurrection, including those at Homeland Security, the Pentagon and the Department of the Interior, which oversees the U.S. Park Police. Critics have assailed the disastrous security collapse under pressure from the rioters, many of whom, spurred by President Trump and a number of Republican lawmakers, had made their insurrectionist intent clear for weeks.

Elected officials are also looking inward for explanations. On Wednesday, more than 30 House Democrats sent a letter to the chamber's acting sergeant-at-arms calling for an investigation into "suspicious" groups of visitors they say were seen inside the Capitol the day before the attack. Some signees were military veterans "trained to recognize suspicious activity," who claim they alerted the former sergeant-at-arms on Jan. 5 after noticing "an extremely high number of outside groups" in the building, even though public tours have been suspended since last March due to the pandemic.

"The visitors encountered by some of the Members of Congress on this letter appeared to be associated with the rally at the White House the following day," the members wrote, adding: "Members of the group that attacked the Capitol seemed to have an unusually detailed knowledge of the layout of the Capitol Complex. The presence of these groups within the Capitol Complex was indeed suspicious."

The letter also requests a review of logbooks for names of visitors admitted by their colleagues — who are not specified but assumed to be Republicans — and asks whether closed-circuit video logs are available. Pointedly, the group also asks whether law enforcement agencies have tried to access visitor information.

Before that letter was sent, several Democrats had previously, albeit cryptically, raised the possibility that advance preparations for the Capitol assault had included some of their fellow members, without offering any names or clear evidence of collaboration.

On Thursday, newly-seated Rep. Lauren Boebert, a Colorado Republican and gun-rights zealot who last May had expressed admiration for the QAnon movement, shot back at remarks made earlier that day by Rep. Sean Patrick Maloney of New York, a Democrat, which Boebert understood as implicating her personally.

"You said that you could 'confirm' a Member of Congress gave Capitol tours to 'insurrectionists' and implied I was that Member of Congress," Boebert's letter said. "Your comments are extremely offensive, shameful and dangerous."

Maloney, who said in the interview that Democrats had raised concerns about some of their "new colleagues" who "believe in conspiracy theories and who want to carry guns into the House chamber," responded to Boebert on Twitter, pointing out that he had not mentioned her.

Maloney wrote: "Um, I've never said your name in public, @RepBoebert. Never. Not once. (If you're going to be a gun nut, you probably shouldn't go off half cocked.)" He added he would post a transcript except that it "might be like 'a fact,'" which "might not help you."

"A thousand apologies @RepSeanMaloney," Boebert, whose tweets about the location of Speaker Nancy Pelosi and others during the attack have led to calls for her arrest, posted in reply. "I'm glad you clarified you were not making any remarks about me whatsoever."

However, 68 elected officials from Boebert's Colorado district, including mayors and town council members, have indeed sent a letter to Pelosi requesting an investigation into Boebert's actions surrounding the insurrection.

"We have heard overwhelmingly from our constituents, therefore her constituents, that there is deep concern about her actions leading up to and during the protests that turned into a violent deadly mob," reads the letter.

"Representative Boebert's speech and tweets encouraged the mob mentality of her social media followers and the people who directly participated in the destructive violence that disrupted a lawful democratic process from taking place as scheduled," the officials wrote.

The letter points to Boebert's social media posts as well as statements she made on the House floor the day of the attack.

"I have constituents outside this building right now, and I promised my voters to be their voice," Boebert said. "They know that this election is not right, and as their representative, I am sent here to represent them."