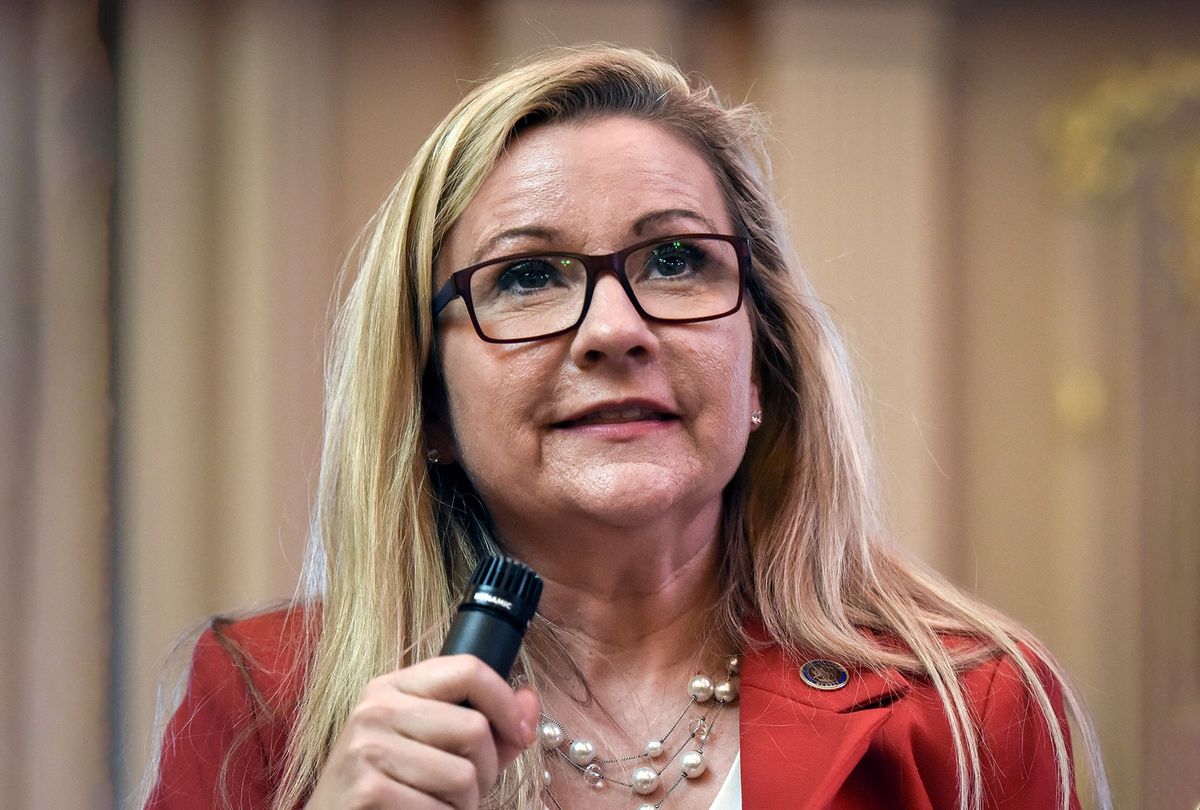 Virginia's leading Republican gubernatorial candidate, Amanda Chase, has justified the Jan. 6 attack on the U.S. Capitol as a response to public health mandates in place to limit the pandemic, according to a recently surfaced video clip. Chase said  the would-be insurrectionists who overran the Capitol while play-acting a ludicrous violent fantasy were actually concerned about "losing our Republic."

A reporter from the British channel SkyNews approached Chase, a state senator from central Virginia who has described herself as "Trump in heels," at the Jan. 18 Lobby Day Patriot Food Drive in Richmond, asking for "a word for the rest of the world" about the Capitol riots. "They're looking in on America and wondering what on earth is going on here," the reporter wondered.

Chase, who faces censure in the Virginia state legislature after referring to Capitol rioters as "patriots," said the attack was about "federal and state" mandates.

"America wants freedom. They are tired of an overreaching federal government and state government telling us what we can and cannot do in the form of mandates. I don't think that's representative of our republic and people," she explained. "What we're seeing is a level of frustration like we've never seen in America, and here in Virginia, because people are concerned that we are getting away from a representative republic and are headed towards socialism and communism, in which the government makes all these decisions for us."

The reporter asked Chase, who spoke at the Jan. 6 rally but left ahead of the riot, to clarify that she was referring to the attack itself: "Is that what was happening at the Capitol Building? Is that what it was all about?"

"Absolutely. Absolutely," Chase replied. "I think the big concern is that we're losing our republic. It's been around for 400 years. We the people want to make sure to preserve our republic." [Fact check: The United States was founded in 1776, making it 245 years old this July.]

Though many state capitals experienced Trump-endorsed armed protests in response to perceived right-wing frustrations with lockdowns earlier this year, the siege on the U.S. Capitol was not, to any perceptible degree, a reaction to public health mandates. There were no federal mandates in place at the time of the attack, and the mandates in place vary greatly from state to state. Rather, the attackers on Jan. 6 were clearly motivated by repeated lies from Republican officials — most notably the then-president — about election fraud, which dovetailed with "prophecies" promulgated by an absurd but widespread conspiracy theory that the Trump administration was on the verge of arresting, trying and executing numerous Democratic leaders for their gothic and grotesque schemes to rape and cannibalize children. That so-called event, known as the "Storm," would then herald the "Great Awakening," when untold secrets about the New World Order would be revealed. Rioters shouted, "Storm the Capitol," and many referred to the day using the subtle codeword "1776."

Chase is one of the two chief Republican contenders for the state's gubernatorial election this year. The other principal candidate, former Virginia House of Delegates Speaker Kirk Cox, has denounced the riot and acknowledged that Joe Biden was the rightfully elected president.

Last week, the Virginia State Senate voted to revoke Chase's only committee assignment as punishment for a Facebook video in which she expressed sympathy with the rioters, calling them "patriots" and aligning herself with their insurrection. (The social media platform later suspended her account.) Even her Republican colleagues abandoned her, and Chase cast the lone dissenting vote.

"When you back good people, law-abiding citizens, into the corner, they will push back," she said in the video. "When you cheat them of their elections, when you take away their constitutional rights and freedoms, you're backing the patriots like myself into a corner. We would like to have a peaceful [resolution] to the events of today, but as you can see, there are many patriots that have already — we, we've had enough."

Facing censure, Chase was given the chance to take back the comments last Friday, but declined. "If I have offended any of you in this room because I am very passionate about the Constitution, I apologize," she said.

After that address, State Sen. John J. Bell, a Democrat, said that Chase's apology "fell far short" and confirmed that the body would move forward this week with censure, which carries no practical penalties. The Washington Post reported that the Virginia General Assembly (as the state's legislature is officially known has only censured one member in modern history, in 1987.

In the Facebook video she posted after the attack, Chase said that she was "very disappointed that Vice President Mike Pence went in a different direction with the electors" — an apparent reference to Pence's decision to stick to his constitutional role, for which some rioters reportedly wanted to hang him. She later told the New York Times that the real insurrection came from the government and elected officials, including Republican officials.

"They've got Mitch McConnell up there selling out the Republican Party," she said. "The insurrection is actually the deep state with the politicians working against the people to overthrow our government."

One of Chase's bodyguards, Joshua Macias, was arrested on Nov. 4 after he and a friend drove an SUV with a QAnon sticker from Virginia Beach to a Philadelphia ballot-processing center, bringing with them two handguns, a semiautomatic rifle and a samurai sword. Prosecutors moved to revoke his bail after he was recorded outside the U.S. Capitol giving "a speech to a crowd inciting a riot."

"During that speech, the rioters overran the Capitol Police Officers stationed at the door of the Capitol and invaded the building in a manner not seen since the War of 1812," federal prosecutors said in a court filing.

"MIKE PENCE IS A BENEDICT ARNOLD," Macias told the crowd, according to the document, adding that Pence "backstabbed the veterans, backstabbed these patriots" and calling on Trump to invoke the Insurrection Act. The document says that Macias then "participated in the insurrection" against the U.S. government.

Macias appeared as a plaintiff against that very government in an outlandish lawsuit filed last week in Texas federal court, which in the second of its three iterations requested that the U.S. government be placed into a form of stewardship modeled on that of Gondor, a kingdom without a king in "The Lord of the Rings."

Spokespeople for Chase and Macias did not respond to Salon's request for comment.