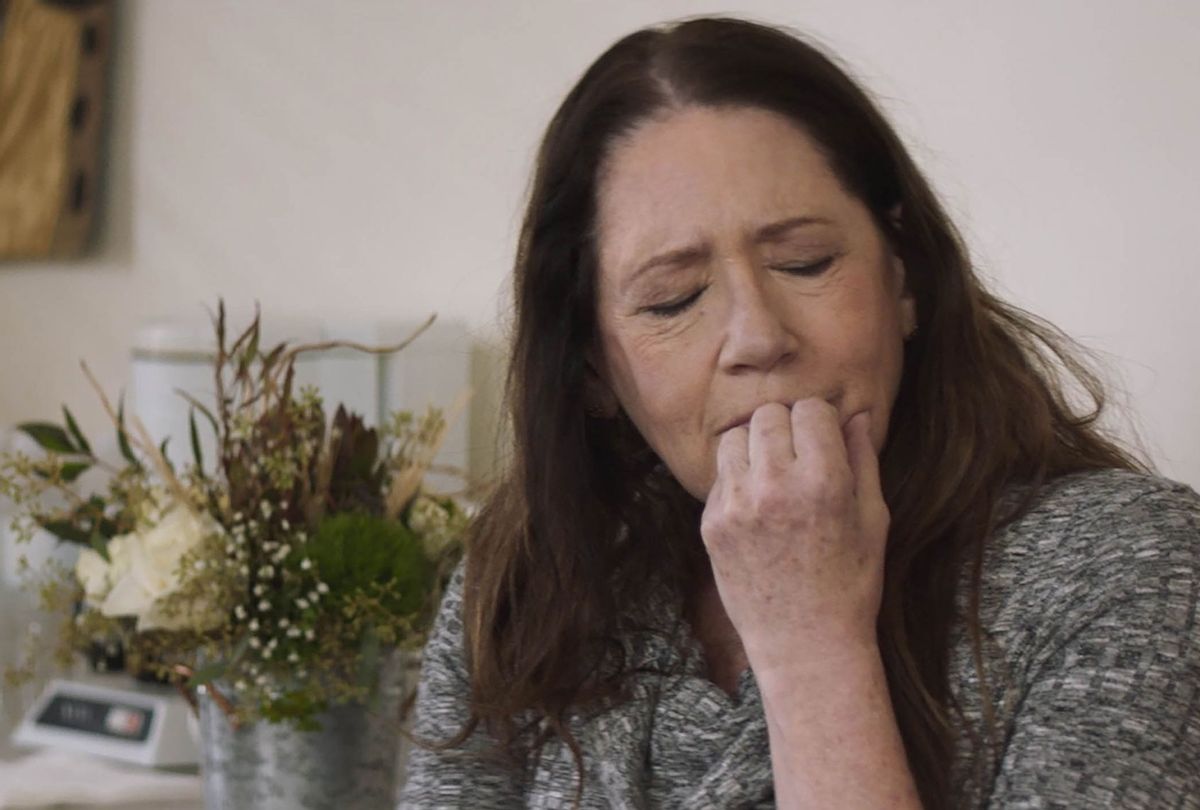 "Mass," the directorial debut of actor Fran Kranz who also penned the screenplay, is an intense, if stagey drama about two couples meeting to find healing in the aftermath of a tragedy involving their sons. The film, which had its world premiere at the Sundance Film Festival, unfolds almost entirely in an Episcopalian church. The film was shot in Idaho.

Judy (Breeda Wool) is anxiously setting up a room where Gail (Martha Plimpton) and Jay (Jason Isaacs) will meet with Richard (Reed Birney) and Linda (Ann Dowd). Kendra (Michelle N. Carter), who has been counseling one of the couples, soon arrives. There is awkward, fussy small talk and pregnant pauses. Kranz offsets these uncomfortable moments with contemplative shots of the church, windows, and rooms. Eventually both sets of parents arrive, and the drama begins in earnest.

The couples, alone in a room and gathered around a table, exchange pleasantries. They eventually start opening up. Gail shows some photographs. Linda displays a jar her son once made that she found special. Everyone is being polite. The atmosphere is stifling.

While the characters initially discuss vague details of the crime that affected both families, "Mass" slowly reveals that Hayden, Richard and Linda's son, murdered 10 students at his high school with guns and a bomb. One of the victims was Gail and Jay's son Evan. The meeting, which is taking place years after the killing, is an opportunity for each couple to "listen and heal," but also understand "why and how this happened."

Franz wisely allows the "action" in the claustrophobic space to develop naturally, allowing each character — and the audience — to absorb the impact of what is being said. His strategy pays off. Kranz's deliberate direction allows viewers to focus on the performers' actions and reactions. Plimpton's Gail is full of visible pain, expressed so clearly in just the way she sets her jaw or cracks her voice when she speaks. Dowd's Linda, in contrast, is compassionate and sympathetic, an earth-motherly type who wants to find peace, not conflict. Birney's Richard is colder, defensive. Meanwhile Isaacs' Jay is justifiably angry, seething inside, while trying to be a supportive rock for his wife.

"Mass" gives each member of the ensemble cast a big speech to emote and express what their characters are feeling. The conversation is certainly compelling as it builds. There are some background details that may provide clues about individual behavior, but this is not a character study. Instead, the film initiates a discussion of the lasting psychological and emotional impact of gun violence and school shootings on these parents.

Kranz's script mentions issues of bullying, isolation, computer games, teenage mental health, and depression to explain the teen's actions. But the film does not — and cannot — provide answers for the bereft characters whose lives have been destroyed by this crime. Instead, "Mass" offers an understanding of the survivors.

The most moving scenes in the film have Linda talking about the experience of being unable to process her grief, or even properly bury her son. She explains what it means for her to be seen as the mother of a murderer, and how she grapples with this sad, harsh fact every day. Dowd is poignant in these scenes because she is not asking for pity; she is unburdening to the only audience that, however pained, might understand her singular experience. But it is a heartrending story Linda tells about her son late in the film that truly resonates.

In contrast, Richard is not indifferent, but certainly the most anxious to put this all behind him. His is an important perspective, but it almost gets lost among the other actors' showboating.

At various times, Linda asks Gail and Jay for stories of their son, to give them an opportunity to share and remember Evan fondly. Gail recounts one memory, about Evan playing football, that leads to a revelatory moment. Alternately, Jay gets riled up when he talks about the situation and goes on a tangent about science and psychopathy. As things get heated, Kranz cuts away briefly, to a memorial, to give everyone a breather.

The filmmaker wisely keeps such cinematic flourishes to a minimum. He also, thankfully, uses music sparingly. Only a church choir, heard in the film's final scene, although well-meaning, feels heavy-handed.

"Mass" cannot help but draw comparisons to Lionel Schriver's novel, "We Need to Talk about Kevin," about a school shooter, and Yasmina Reza's play, "God of Carnage," about two parents of sons involved in a conflict, both of which were adapted into films. But Kranz's somber drama is a worthy entry into the genre. It is focused on forgiveness, and how folks can find something valuable in of something horrific. However, as cynical as it sounds, one cannot help but think that "Mass" has been engineered for bleeding-heart liberals. It fails to acknowledge resentment's virtue.

A small but significant moment at the end of the film may address this best. Gail wonders what to do with the flowers Linda kindly made for her. She does not deliberately leave them behind or toss them out in contempt. She asks for a box to put them in, which makes Linda feel thoughtless, and challenges the benevolent Judy. So, Gail holds on to them, like a symbol of her child, whom she can't let go of. "Mass" may say more in this quiet, reflective moment than in all the talking that came before it.