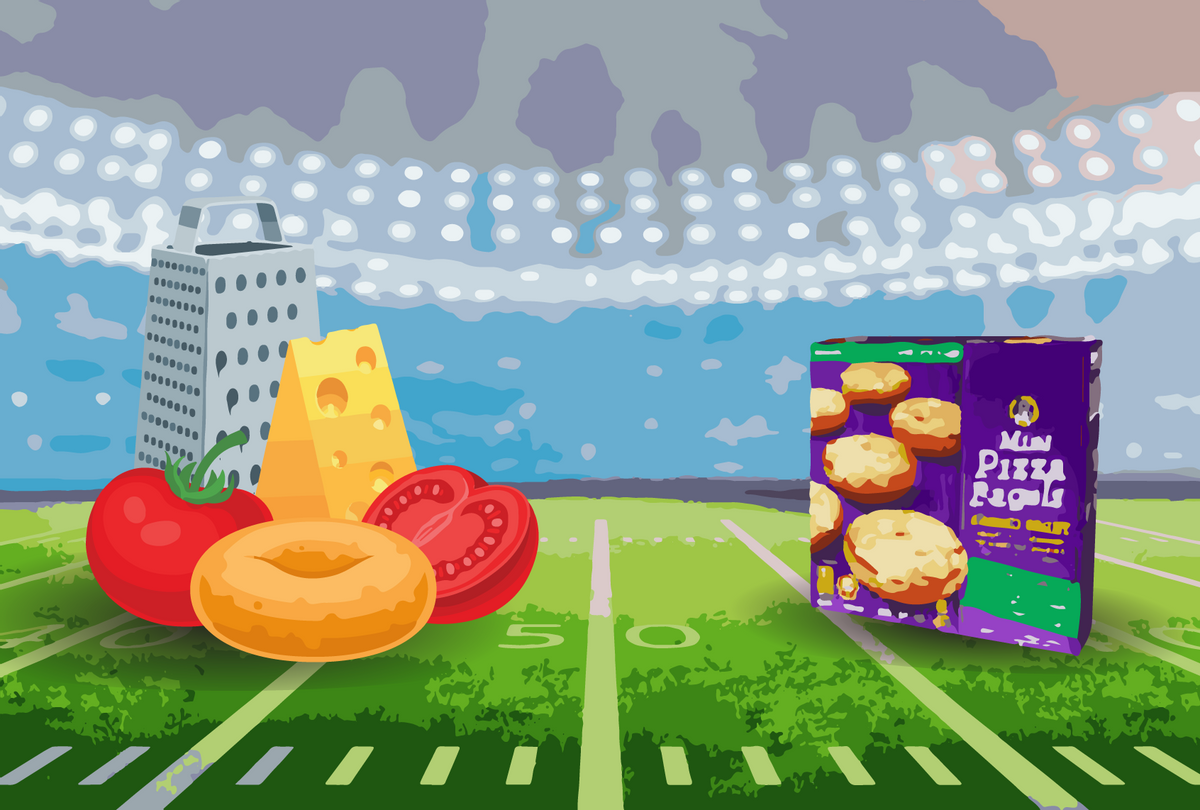 Since I (more or less) gave up processed junk food like Bagel Bites and Pizza Rolls in a celebrity doctor Andrew Weil-sparked cabinet purge some 20 years ago, I've thought back to those treats with longing more than I'd like to admit.

The vaguely pizza-inspired finger foods were the lion's share of my college-budget Major Food Group of cheese on tomato on carb, and they figured prominently in the only attempt at a Super Bowl party I ever made (also a low-rent college endeavor).

Since we won't be packing the bars to ogle J.Lo at this year's weird big game, why not comfort ourselves with from-scratch renditions of nostalgic junk-comfort food like my beloved Bagel Bites? It'll be brutally cold in most of the country, so where better to be than in a nice, toasty kitchen?

RELATED: Why you should be eating biscuit pizza, an endlessly versatile and crowd pleasing food with soul

It's not hyperbole to say it was a dream come true to find a food writer who could create what has come to be known in my household as a straight up Bagel Bite. Dan Whalen— author of several cookbooks, including "Tots, 50 totally awesome recipes" — and blogger at Thefoodinmybeard.com is the guy behind one of the most heart-stopping (maybe literally) Instagram feeds I follow. His grown-up (read: real food) versions of comfort classics make me want to give up and move to my couch with a TV tray.

In other words, he was ideal for this mission. Granted, every scrap of joy a year into pandemic life feels monumental, but I'd have been fairly ecstatic — global catastrophe notwithstanding — when he jumped on my ask and turned around a recipe in a day.

I'm no baker, and don't even dabble, but it seemed eminently doable, if a bit lengthy of a process. Mix and knead dough, rise, form balls, rest, poke holes, rest, boil, bake, top and bake again. Rather a lot? Sure. But what cost real, honest-to-God homemade Bagel Bites?

So off we went, and in one afternoon, I turned out 32 from-scratch miniature bagel pizzas and life will never be the same again. The kitchen even smelled like my Bagel Bite memories as they baked, though minus the aroma of corn syrup solids, high fructose corn syrup, modified cornstarch, nonfat dry milk and methyl cellulose (I guess?).

In true Bagel Bites fashion I gobbled the first one so fast it burned the roof of my mouth and still couldn't resist the next bite. It was a legit bagel base complete with poppy and sesame seed sprinkle, a clean, bright layer of tomato sauce, more cheese (mozzarella and Parmesan) than was strictly necessary — because I used to also add more cheese to my Bagel Bites — teeny squares we chopped up of salami and a hit of dried oregano for the finishing touch. In other words: perfection. The only possible improvement would have been homemade ranch to dip them in. Ah, well, next time.

You could certainly make just these and be perfectly happy with your Super Bowl spread, but why not go all out? Dan also shared a recipe for homemade Combos, because don't we all need that in our lives?

RELATED: Homemade pizza in under an hour is entirely possible — & entirely delicious

And one of my favorite Kentucky (or anywhere, for that matter) chefs, Kristin Smith, owner of The Wrigley Taproom in Corbin and a sixth generation farmer at Faulkner Bent Farm, completed my Super Bowl dreams when she shared a homemade take on a Totino's Pizza Rolls recipe. I'd only ever had her beautiful Appalachian fare, but a mutual friend and fellow food fiend shared the valuable intel with me that Kristin had one time served pizza egg rolls at a dinner that he labeled "oddly stoner-themed." Yup, that sounded just about right for this undertaking, so I asked and received. Her recipe — a specific and commanding creation — promises just the type of junk food nirvana I experienced with the homemade Bagel Bites, and I can't wait to make them myself this Sunday. Enjoy! 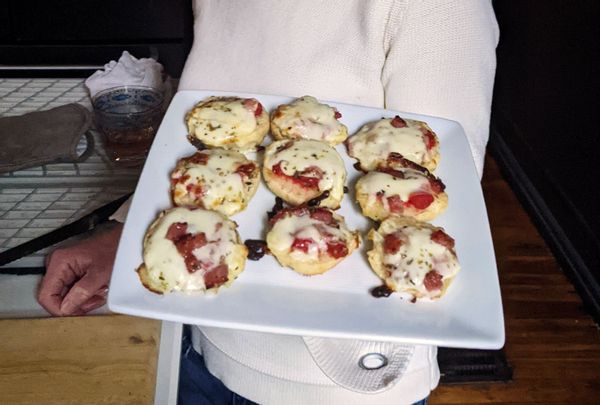 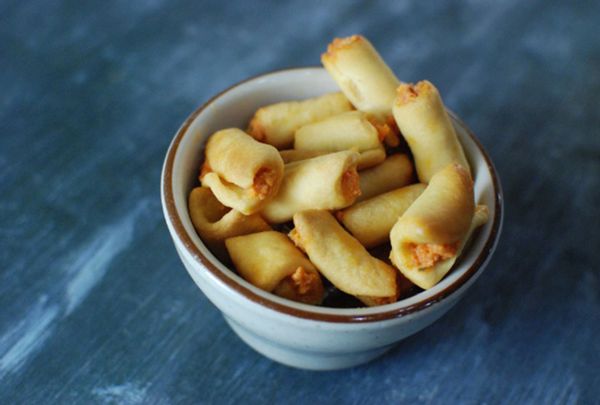 Pretzel recipe from Alton Brown (with notes below)

Food process filling to a paste adding a small amount of olive oil as needed. Put this into a piping bag and pipe it into the combos. Make sure it is well processed or it will get stuck in the thin piping tip.

Instead of shaping the dough into pretzels, roll it out thin and cut it into the combo sized strips. Also don't boil it or use egg wash. Wrap the small strips of dough around wooden dowels that are really well oiled. Use a little splash of water at the seam to help seal the dough together. Then put the seam side down on the baking sheet. Bake for about 30-40 minutes at 400 until hard and lightly starting to brown.

Take the combos off of the dowels and pipe them with the pizza filling mixture.

For the Pizza Rolls:

For the Marinara Dipping Sauce:

For the Pizza Rolls:

Place 1 spring roll wrapper on a clean, dry work surface so that one corner of the wrapper is pointing at you (position this like a diamond, rather than a square). This part gets tricky to explain in writing, so let's just keep going with the diamond analogy and think of it as a baseball field. It'll make this easier as we go.

Starting at the bottom third, closest to you — standing at home plate, and halfway between home plate and the pitcher's mound — place 3 pepperoni slices horizontally. Overlap them slightly. Your baseball diamond now has some round, spicy mascots clustered in the zone between the pitcher's mound and the catcher.

Next, lay 1 mozzarella stick right on top of the pepperoni party. Now the real fun begins:

Next, use your fingers (or a pastry brush, if you're fancy), and dab the edges of 2nd base and the outfield border of the wrapper with water. Continue to roll the wrapper towards the outfield, snugly but not so tight that you rip the wrapper.

You've made it through the hard parts. Congratulations. Now:

Place that finished roll aside, underneath a slightly damp towel. Continue rolling until all spring rolls are finished and resting under the towel.

Next, pour around 1 inch of oil into a large, heavy skillet. Heat the oil over medium-high heat until it reaches 350F on a deep fry or instant read thermometer.

Using a set of tongs, slip the spring rolls into the oil carefully in batches of four for around 3-4 minutes, turning occasionally until golden brown and crispy.

Remove from skillet and transfer the pizza rolls to a paper towel-lined plate to absorb excess oil.

Serve immediately, with the marinara sauce below:

For the Marinara Dipping Sauce:

This sauce is a riff from Marcella Hazan's ridiculously famous tomato sauce.

The most important thing you need to know about this sauce is: the tomatoes MUST be San Marzano. There are no substitutions. There are no pinch hitters. Get. San. Marzano. They can be fresh — if you go fresh, you need 2 lbs — or they can be canned.  But don't short yourself on this step.

Next, crush the tomatoes with your hands. There's just some kind of magic that happens when you do this. Don't use a metal fork or a spatula or a plastic bag to keep your hands from getting dirty: commit to this sauce.  Invest all of your intention into making this beautiful sauce turn to magic through your hands. Trust me.

Place a medium sized pot over low-medium heat and add your tomatoes until they start to simmer. Then add your quartered onion, red pepper flakes, butter, tomato paste, herbs and salt. Cook uncovered at a very slow, but steady simmer for about 45 minutes. Stir occasionally until it reaches your preferred sauce texture. One clue that it is ready: the butter fat will separate and float free, away from the tomato.

Discard the onion segments, or keep them to nibble on later. I won't tell.

Transfer sauce to your ideal dipping bowl, and serve immediately alongside your pizza rolls.

For more from our pizza oven, check out: