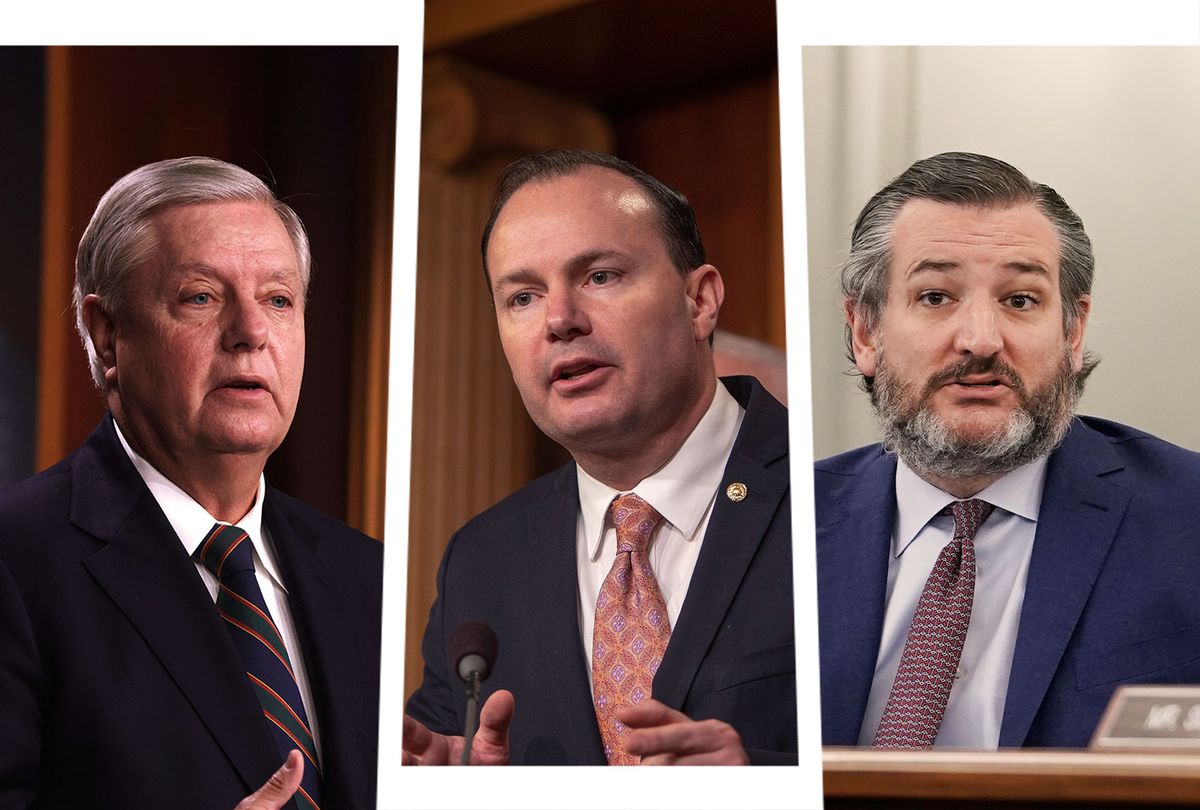 Graham, who joined Trump's effort to pressure Georgia officials to throw out legitimate votes and overturn the result in that state, refused to discuss the meeting with reporters. Cruz, who led the Republican objections to the certification of electoral votes on Jan. 6, acknowledged to CNN's Manu Raju that they were helping the Trump attorney's with their defense.

"We were discussing their legal strategy and sharing our thoughts," Cruz said.

Trump attorney David Schoen said the meeting was about "procedure."

Asked if it was appropriate to meet with jurors in the Senate trial, Schoen told Raju, "I think that's the practice of impeachment. There's nothing about this thing that has any semblance of due process whatsoever."

"I'm no lawyer, but I'm fairly certain jurors aren't supposed to strategize with defense counsel in the middle of a trial," tweeted Rep. Gerry Connolly, D-Va.

Sen. Dick Durbin, D-Ill., who recently replaced Graham as chairman of the Senate Judiciary Committee, told CNN that the meeting signals desperation on the Republican side.

"The reason why these three Republican senators are meeting with the attorneys … is because they're worried," he said. "The House managers have put together a powerful case against this president. They have a mountain of videotape to back up what they say, countless tweets, all sorts of information that really is not in the best interest of the president, so I'd imagine they're pretty desperate to come up with a good defense strategy."

The meeting comes after the Trump attorneys, who were hired at the last minute after Trump fired his legal team amid a pay dispute, unsuccessfully argued that the hearing was unconstitutional in a presentation that was widely panned, even by Trump's allies.

Graham told reporters he was perplexed by Trump attorney Bruce Castor's meandering performance. Cruz said he did not think Trump's attorneys "did the most effective job." Trump himself was reportedly enraged by Castor's rambling presentation, to the point where he was nearly screaming at the television.

Although both sides are allowed 16 hours to present their arguments at the trial, Castor later told CNN that Trump's defense team intends to "shorten" its arguments to just one four-hour presentation after Democrats presented their case for three days. Despite Trump's fury, Castor is expected to have a speaking role in the Friday session. CNN also reported that "the legal team is so disorganized, Trump's allies are apprehensive about how the defense will go."

But with most Republican senators already on record as endorsing the view that the trial itself is unconstitutional, Trump's acquittal is all but guaranteed, Cruz argued.

"I think the end result of this impeachment trial is crystal clear to everybody," he told CNN. "Donald Trump will be acquitted. It takes 67 votes to convict him and every person in the Senate chamber understands that there are not the votes to convict, nor should there be."

Graham criticized the Democratic House impeachment managers, who presented dramatic video and testimony from the deadly Capitol riot Trump is charged with inciting, calling their presentation "offensive and absurd."

"The 'not guilty' vote is growing after today," he tweeted on Thursday.

Lee, who is presiding over his second Trump impeachment trial in 13 months, told Fox News that Trump deserves a second chance.

"Everyone makes mistakes," he said. "Everyone is entitled to a mulligan once in a while."

Republicans were similarly accused of betraying their oath to stay impartial during Trump's first impeachment trial.

"I'm going to coordinate with the president's lawyers," then-Senate Majority Leader Mitch McConnell, R-Ky., declared at the time. "There is no chance the president is going to be removed from office."

"We all know how this is going to end," he said.