Pike plays a court-appointed legal guardian who swindles her elderly wards, until Dianne Wiest fights back 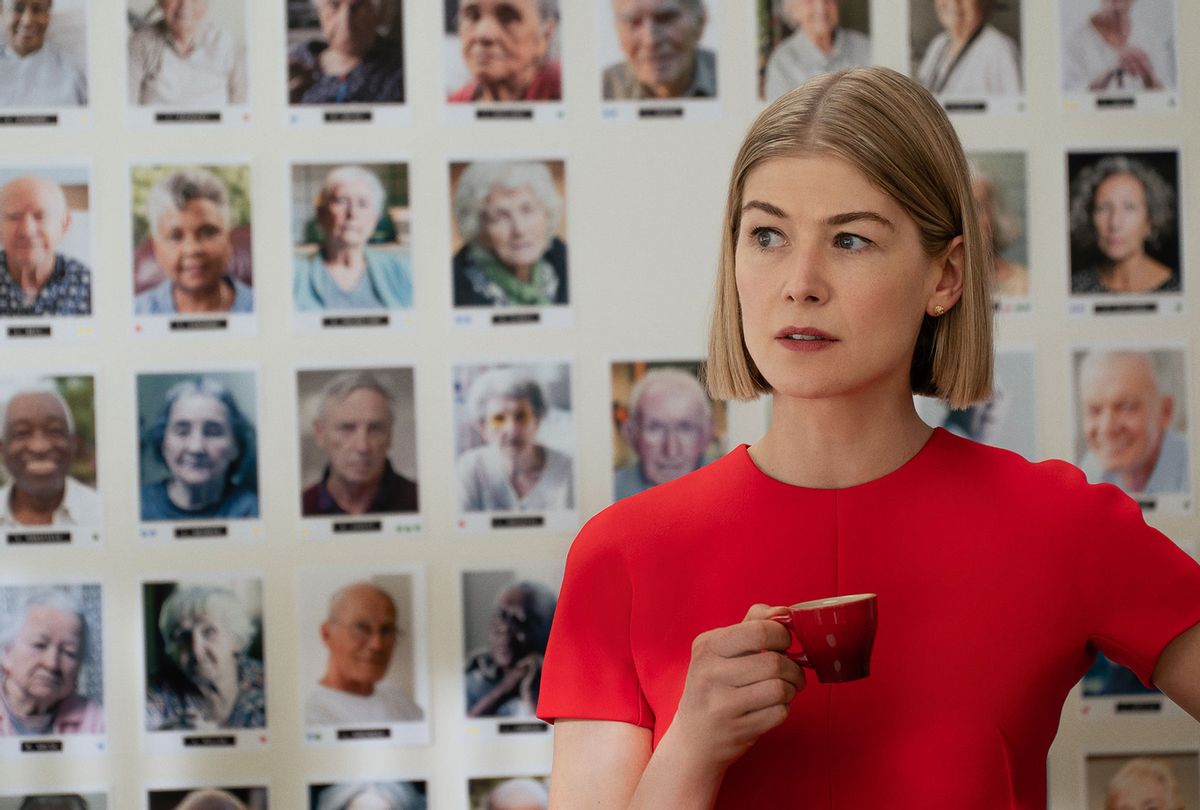 Marla Grayson (Rosamund Pike), who is at the center of the slick, darkly comic caper flick, "I Care A Lot" is one shady lady. She comes off as caring, but — watch out! — she is crafty. Marla may be a court-appointed legal guardian for the elderly, but she swindles her wards out of their homes and income. She even has a discreet network of accomplices who assist her.

Just watching Marla exhale smoke from vaping suggests she is the devil incarnate, and Pike embraces her devious character with the same ruthlessness as she embraced her Oscar-nominated role in "Gone Girl." Marla even says in the film's opening voiceover, "Playing fair is a joke invented by rich people to keep the rest of us poor." She is a self-proclaimed lioness not a lamb. She schemes because she has been poor and knows that being rich is better.

Marla's ethical boundaries are squishy, even though she maintains that she cares — a lot — for the seniors she legally represents. Moreover, given that Family Court Judge Lomax (Isiah Whitlock Jr.) claims she is a "well-respected professional guardian," one might think he is on her payroll.

"I Care a Lot" opens with Marla working her, ahem, charm in Judge Lomax's courtroom when the disgruntled Mr. Feldstrom (Macon Blair) accuses her of keeping his mother from him and draining her assets. He is right, of course, but Marla's airtight defense — plus the fact that Feldstrom assaulted a staff member and vandalized the facility's reception area — finds the case in her favor.

Ready to build on that success, Marla is made aware of an opening at a Berkshire Oaks Senior Living in part because the manager Sam Rice (Damian Young) is in Marla's pocket. Through the help of another paid contact, Dr. Amos (Alicia Witt), Marla finds "a cherry" (a perfect mark) in Jennifer Peterson (Dianne Wiest). This single, childless woman, who happens to be sitting on a pile of cash, is, thanks to Marla's court-appointed guardianship, soon unhappily ensconced in a new unit at Berkshire Oaks.

The entire operation is insidious, invasive, and swift. Marla and Fran (Eiza González) — her partner in crime and in bed — clean out Jennifer's house, sell off her estate, and find a safety deposit box that contains something that is both very expensive and untraceable. Goldmine!

But "I Care a Lot," written and directed by J. Blakeson, is only just getting started. When Alexi (Nicholas Logan) meets Fran at Jennifer's house, his boss Roman (Peter Dinklage), is none too happy about this turn of events. Roman sends his shark of a lawyer, Dean Erickson (a scene-stealing Chris Messina) to meet Marla. He offers her money and even threatens her, but the lioness won't back down — or lose. A game of one-upmanship and various reversals of fortune quickly ensues.

Blakeson makes his glossy film go down smoothly as the sharply dressed characters behave badly and sometimes use tasers. "I Care a Lot" is cleverly plotted to the extent that the film lets viewers feel like they are accomplices in the subterfuge. Part of the film's giddy fun is waiting to see if, when, and how Marla and/or Roman will be taken down.

In fact, the film's best joke may be the mutual respect these two criminals have for each other as they play "Who will blink first?" during a particularly tense meeting. That said, both Marla and Roman seem to be efficient types, so the fact that they each give the other an opportunity for a comeback is curious, and perhaps, even sloppy. Blakeson's film also gets a bit flabby when it depicts an extended sequence involving a knocked-out tooth.

Despite the expected setbacks, the film's plotting does have some opportunities fall neatly into Marla's lap. Given how much her character hopes to gain, she could struggle more.

Pike, who was nominated for a Golden Globe for "I Care a Lot," impresses with her phony politeness and inability to flinch. It is highly satisfying watching her verbal sparring with the natty Dean Ericson in her office or a courtroom. But her exchanges with Jennifer are even better; they show that Marla may have unexpectedly met her match. When Wiest purrs, "I'm the worst mistake you'll ever make," it is hard not to hope that is true.

Marla's relationship with Fran, however, is arguably the weakest part of the film. It almost fails to serve a purpose, which is a good thing to a degree (nothing is made of it), but it also feels like a missed opportunity (nothing is made of it). Blakeson doesn't quite equate homosexuality with villainy but "I Care A Lot" also doesn't measure up to the "lesbians take on the mob" pleasure that is "Bound." Alas, Marla and Fran come across more as fiends (sic) with benefits than two women in love. González is just given far too little to do.

In support, Peter Dinklage plays Roman as coolly menacing and his tantrums when things do not quite go his way are dryly amusing. And Dianne Wiest's expressions as her life is ripped asunder are priceless. (She too, could have been better utilized).

"I Care a Lot" delivers the same kicky pleasure as the recent "Promising Young Woman," as these female protagonists use a ruse to get what they want. Marla does not have an altruistic reason for her actions, which imbues the film with some amorality, but there are some feminist messages about women besting men.

Blakeson's film is not deep, but it is enjoyable because Pike makes viewers care about Marla. And that may be more than enough.

"I Care a Lot" is now available to stream on Netflix.