Rachael New spoke to Salon about Victorian death photography, tabloids & what she'd like to see in a second season 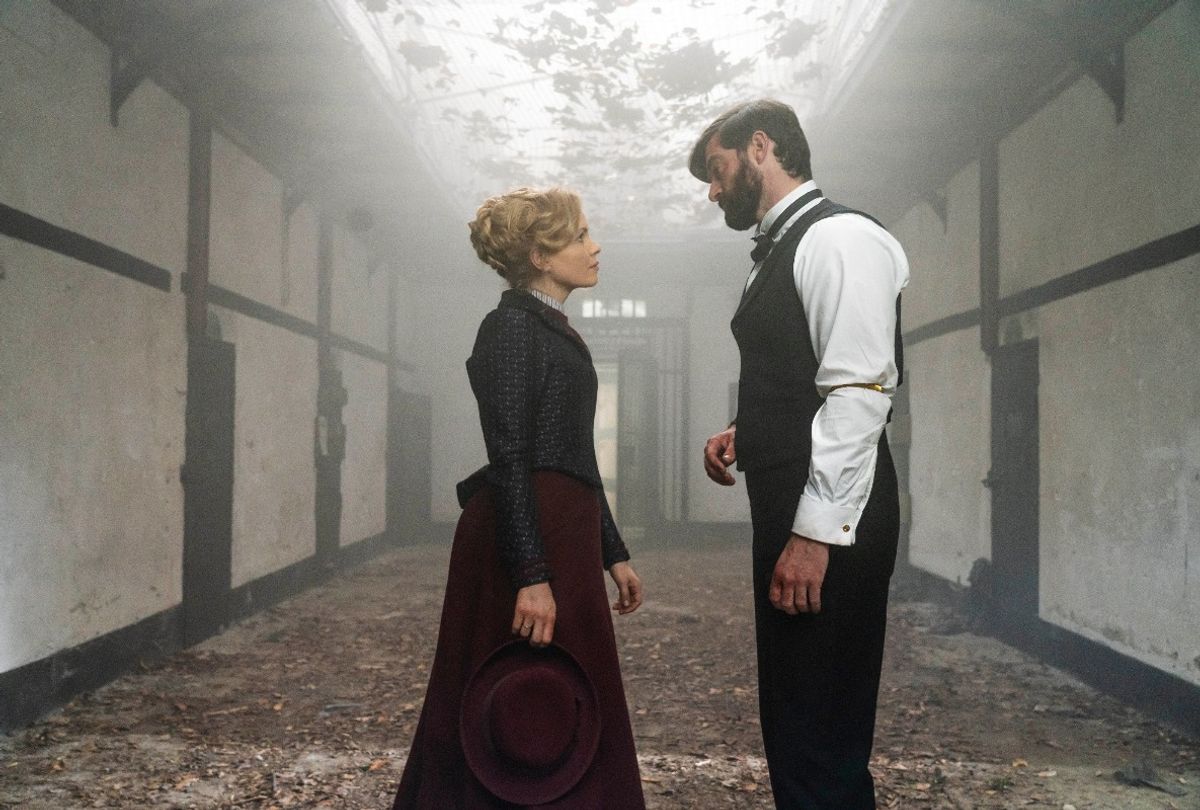 The following contains spoilers for the first season of "Miss Scarlet & the Duke," including its finale.

The finale of "Masterpiece" Victorian-era mystery series "Miss Scarlet & the Duke" hits close to home for tenacious sleuth Eliza  Scarlet (Kate Phillips) who discovers that her father's untimely death wasn't the result of a heart attack after all but foul play at the hands of corrupt police. Nevertheless, solving the case marks a turn in her fledgling career as a private detective because it could finally keep her solvent.

"You did your job and you did it well," she imagines her father Henry (Kevin Doyle) saying. "Word will spread that you were involved in this high-profile case and your reputation will grow."

Eliza needs the good PR. Struggling to make ends meet has been the price of her independence; most middle class women in Victorian London would have preferred to find financial security in marriage instead of work. Taking over her father's private detective business, however, is a challenge unto itself since women were regarded as helpless and inferior in every way, including mentally. Why would anyone pay for her services?

"She's a progressive, ambitious woman at a time when women have no real rights," series creator Rachael New said in an interview with Salon. "She does earn just enough to keep afloat and run this small concern, enough money to be financially independent. But she's never going to be this hugely successful woman because she's always got to be a woman struggling in a man's world. That's the reality of it."

Continue reading for the rest of the interview with New, who discusses Eliza's unusual upbringing, her "will they, won't they" relationship with William "The Duke" Wellington (Stuart Martin), and the possibility of a second season.

Henry was the one who had raised Eliza to have this agile mind that's been helpful as a detective. But why did he then pull back and require her to fall into a more traditional woman's role later in life?

Eliza is obviously a single child. Her mother died when she was young, and her father Henry Scarlet raised her. He was a progressive man and he loved teaching her things, and developing that sharp forensic mind that she had.

He is a bit of a fantasist, Henry Scarlet, he's a drinker and a gambler, and he doesn't really pay his bills, which ends up with her being penniless. He doesn't really want to face the reality.

But then there comes a point where she's getting into fights and she keeps getting kicked out of school, and he could hear his wife Lavinia Scarlet's voice in his head saying, "You're setting her up for quite a miserable time because she's never going to be enough, giving her that fantasy that she's going to be equal to men and do what she wants to do when she's a young woman. You need to give her a reality check." He knows that he is setting up for a fall if he carries on.

Why did you decide to use the device of Eliza speaking to her late father Henry as if he's still there to offer advice or sitting in her office?

I lost my dad about 15 years ago. I don't know if people had the same experience, but you do think of the people that you've lost, that you love. I can still hear his voice in my head. "What are you doing, Rachael?" I wanted that to be a presence in the show. I wanted her to have this man who she deeply loved more than than anybody else in her life to be at the present so we could use it as a kind of vehicle to get into her mind and to really dig down into her hopes and dreams.

There's a lot of bravado there. She wouldn't necessarily admit to many people if she were upset or wasn't confident, was feeling worried or anxious, and I think that's just a nice little way in with her dad giving us a little insight.

How did you decide on the time period and how that affects the methods by which Eliza could solve cases? The forensics we know are not what they used then.

I specifically chose the early [18]80s for lots of different reasons. One of the reasons was I didn't want it to be too near the Jack the Ripper murders, when actually forensics had moved on quite a bit. During the early '80s forensics were in its infancy. I think it's 1878 when the CID [Criminal Investigative Department] is formed, and because I wanted Duke to be this detective at Scotland Yard. So that was the beginning of really starting to focus on murder inquiries and trying to use forensics.

But it was very early days. So we didn't even start using fingerprints until 1901. So I was really keen on that, because there's something there's a much better story you can tell if you're really just relying on the forensic minds of our detectives; it makes it so much harder for them. And I just think it makes it a bit more exciting.

Although even with Jack the Ripper, they had a team of detectives on this and they still believed that the retina would have had an imprint of the last thing it saw, a sort of photograph. So with the women that were killed they thought that possibly Jack the Ripper image would have been on their retina when they died and stuff like that, which is absolute nonsense.

In the episode "Memento Mori," you focus on that practice of taking family photographs of people even when they're dead, dressing them up and making it look as if they're alive to have a keepsake of them. What did you discover about that in researching it?

When you see these actual Victorian pictures of dead relatives posing in a group photograph, they're extraordinary. I mean, often you can't even tell who's alive and who isn't. It's pretty disturbing as well, especially the ones with the children.

But the Victorians were obsessed with grief and grieving. They had huge funerals, they would cover their mirrors over with lace cloths, and to make sure the spirit wouldn't leave the house, the body would lie in the coffin for a few days in their house. They had all sorts of weird rituals. And they were sort of both terrified by death, but also celebrated it in some ways. It was a really interesting period, because science was coming on so much that this threatened a lot of their religious beliefs.

The funeral parlor owner, Herr Hildegard (Richard Evans), was one of my favorite characters. What can you tell me about that newspaper "The Illustrated Police News" that he loved to read?

That was what we would call like a tabloid paper. It was a real paper and was just full of the ridiculous and the gothic most shocking police cases. They exaggerated a lot of these cases as well. But it was just full of these illustrations; it was this crazy newspaper, and people absolutely loved it. They would get it every week and flip through it, and pass it on to their friends.

I think most people thought it was completely true. That was the point because they didn't have anything to compare it to. It was a dangerous thing that people would read these insane stories and completely believe in them. There was one I downloaded. The headline was about these two monkeys breaking into this house. It was they just escaped from the zoo or something. It's just insane and it was written straight as well.

Although there are a few heated glances and talk of a kiss with Duke in the past, nothing really happens between him and Eliza the whole season. At the end, they just go to dinner together. I was surprised that there wasn't at least a partial payoff for their relationship.

I was a mad, mad fan of "Moonlighting," and then when Cybill Shepherd and Bruce Willis kissed, that was kind of the death knell really for that show. Not that I'm not saying they won't ever kiss, Duke and Eliza, but there's something really lovely about their friendship. It's not just about the kissing and the big kind of romance, it's about them as friends as well. I want to explore that more.

The "will they, won't they" is the thing that people are going to in for, and I'll tease that out. But the reason why I didn't do it was yes, it is too early. I think as soon as that happens, it will change things for Eliza. I don't ever want her to be defined by what man she chooses because she's just too much of her own person for that. And, you know, to be honest, there's no doubt in my mind, she would make him extremely miserable. I think Duke would really like to come home and have dinner on the table and a whole brood of children, and she can't even cook an egg. But never say never.

Just this month, "Masterpiece" executive producer Susanne Simpson couldn't make any announcements about the future of "Miss Scarlet," although she did tease, "Wait for it." If we were going to get a second season, what storylines would you like to pursue? I imagine you've thought of this already.

I would have lots of things in store for Rupert and how he'd navigate his domineering mother, and try and have some semblance of a happy life. It would be really difficult for him because she's a very difficult woman. I love Mrs. Parker. We would have more of her in Season 2 as well.

I would also delve a lot more into where Duke's come from. Duke came from Glasgow, from really poor beginnings – basically, the Victorian workhouse. He came to London as a kind of scrappy young man, and Henry Scarlet found him probably doing things that he shouldn't be doing: pickpocketing and robbing and all sorts of things.

Henry was his mentor, Henry was the one who turned him on to the police. That's when Duke and Eliza would have, their worlds would have orbited each other but also he would have been to her house when they were teenagers.