Jack Kesy is a chatty hacker in comic thriller "Dark Web," in which the truth is loosely defined

"I've always been in trouble," says the "Claws" breakout about bringing his natural brashness to the comedic role 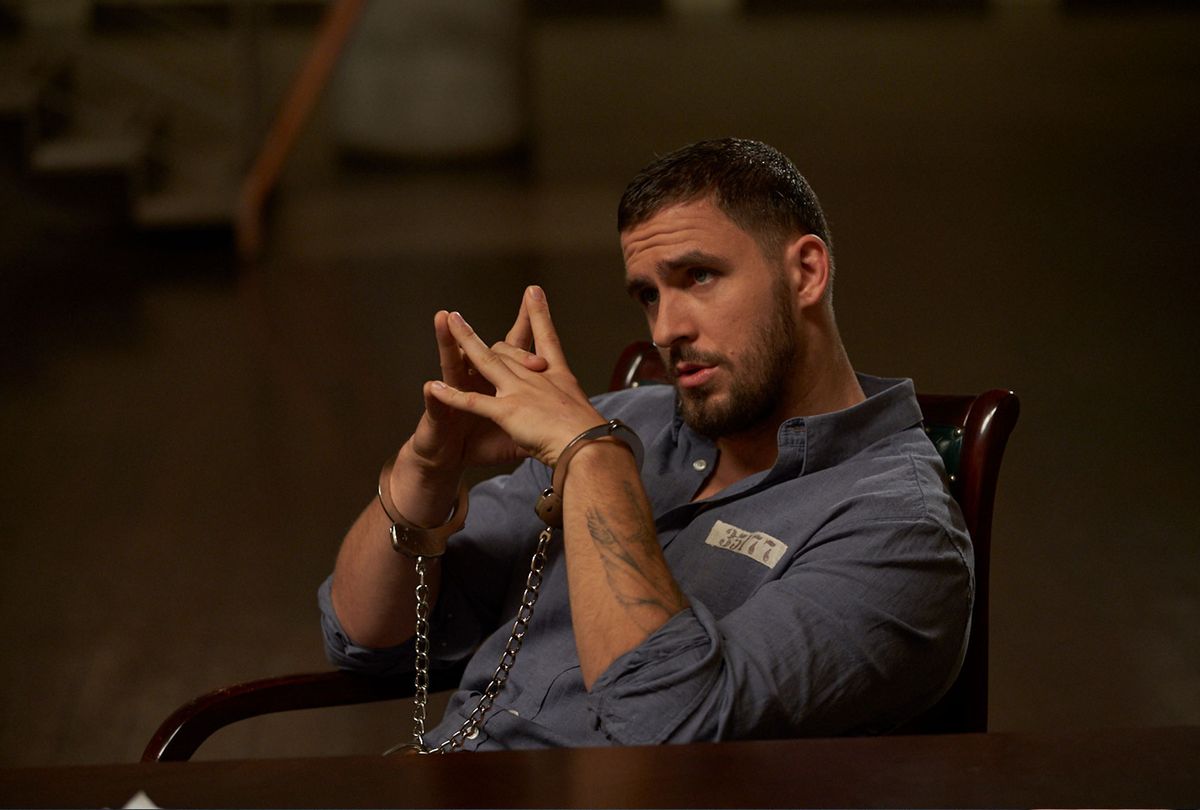 Jack Kesy gets a rare leading role as Connor Black, a hacker with perfect recall, in the shameless and diverting comic thriller, "Dark Web: Cicada 3301." In this zippy, B-movie mystery, co-written by actor Alan Ritchson in his feature directorial debut, Connor is shackled in a courtroom recounting how he got involved with a secret society's global recruitment game.

Black's trickster is a plum part for the actor. Kesy's character can play up a wounded sensitivity to fool his prey, and he is fun to watch when he gets ferocious. But Connor is also a smartass. In the courtroom, he audaciously peppers his narrative with some amusing and untrue digressions — like when the NSA turn up at a crime scene wearing diapers. His storytelling is captivating, because one never knows what Connor will say or do next — but whatever it is, it will be entertaining because of Kesy's delivery.

Connor's brashness, which one suspects is also Kesy's default position, is what makes him so appealing. His bad boy charm may be why Connor's best friend Avi (Ron Funches, terrific) and Gwen (Conor Leslie), a librarian, reluctantly help him puzzle out the truth in "Dark Web: Cicada 3301."

Kesy is obviously comfortable in his skin, and his cockiness and confidence made an indelible impression on viewers as the sexy drug dealer/love interest Roller in the Southern-fried crime comedy, "Claws." He has also distinguished himself in ensemble military films such as "12 Strong" and "The Outpost."

"Dark Web: Cicada 3301" gives the actor the opportunity to riff on a film noir antihero. Casting agents should put him in a Mike Hammer remake pronto! Kesy has the muscle, the penchant for sarcasm, and the sex appeal to carry that iconic role. But he also has the smarts and the chops to play a sensitive love interest. (It's true; Kesy did this back in 2012 in the independent gay romance, "Morgan.") Equally important is the actor's keen sense of humor, which comes across in this new film and his previous roles — he is in on the joke.

Poised to break out, Kesy spoke with Salon about making "Dark Web: Cicada 3301."

Connor has perfect recall, is computer savvy, can play chess in his head, land a punch, and tells some amusing stories, despite being, at times, an unreliable narrator. What are your superpowers, and what are your weaknesses?

Man, I have 3 out of 5. I can tell some good stories. I can land a punch. I just started using a computer about a year ago. I'm a little behind on that. I do not know what my superpowers are. I want to say — this might sound arrogant — but I think I can empathize pretty well with people. [Pauses] I'm probably way out of range with that. I have selective empathy.

You put a comic spin on your roles. Can you talk about playing goofball bad boys, and cocky but smart characters who are always in trouble with the law?

I don't know how much of that I bring to the table and how much of that is in the script. I guess it varies. It comes from my life experience and my upbringing. If the script allows it, I let loose. If it provides the scaffolding for that personality. My backstory highlights that.

What is your backstory that it informs your work?

I had a hard time with authority, and I don't think that ever ends. It's a lot better today. I have my own family, and I have grown to respect and kind of admire some aspects of authority and infrastructure. But I've always been in trouble as a kid. I don't know why that is. It's a loaded conversation. Parts of it are psychological, and spiritual, and emotional. Maybe it's not that complicated. People suck, and I let them know. [Laughs]. I've had a troubled past. I ran around with a bunch of goons on the street and been in and out of jail as a kid. It took me a while to clean up my act. Acting helped that. Acting helped me really educate myself not only intellectually, but emotionally. It brought me closer to myself and other people. It helped channel that confusion and anger and lack of joy and purpose. Those are a lot of aspects right there. If you can find a place that is less angry and feel a genuine joy, you're lucky. I was lucky to find that. It obviously changed my life.

"Dark Web: Cicada 3301," is a hybrid genre film, a contemporary B-movie, with some clever special effects, some gallows frat-boy humor, and even some sexual fluidity. Although you didn't write it, can you talk about how you upend the tropes of the genre?

It's tricky because so much of that is directorial. That's not to deflect. So much of that is out of my hands tonally. I challenge things scene by scene. I prefer to take on a challenge person to person, where it asks for some vulnerability and where I can add some kind of layer and texture to some dialogue or a moment where nothing is being said. I'm always looking for those moments. We did a lot of that stuff where I just go off the cuff with Alan [Ritchson], but I am good at making stuff up on the spot. I bring my own flavor to it. [Laughs]

The film is pure escapism, but it does raise points about anti-science and being anti-establishment. Do you buy into Dark Web or conspiracy theories, or let them alone?

Until it crosses your path — then you have a different outlook, and perspective, and experience with it. Until then, if it's not affecting you, how much do you really care? Me personally, it depends on where I am in my life. If I'm hibernating at home, I can go down a rabbit hole, because I'm imaginative, and I'm a wacky actor; I can get into it. But I'm pretty well grounded. I try to stay present. I've got a lot on my plate. Logging into Zoom is a challenge for me. So yes and no. I'm up for it. I'm pretty open-minded.

"Curiosity kills" says a character in the film. I love the treasure hunt quality to "Dark Web: Cicada 3301," and wondered what drives your curiosity? And are you a gamer, a puzzler, or a codebreaker?

No. I like to deem myself as something of an intellectual. But it's more literature, books, art. I just picked up reading again. I gotta delete YouTube. I see a lot of books behind you [on this Zoom call.] Did you read all those books, or do they open up to secret closets? I just finished the Hal Holbrook autobiography before he passed away. I'm not much of a gamer. I like hands-on stuff, being in the woods, fixing stuff, sports. But I love being immersed in a book when it gets you. There's nothing like it. I like it more so than even film, because you have to use your own sensibility.

This is a rare leading role for you. You tend to work in ensembles. Do you prefer to go solo, or be part of a team, and why?

I don't have a preference. It's great to be a leading man and spearhead the operation. It all falls and sets on you. That's great; I love that. But I'm really interested in moment to moment sometimes. I don't mind being part of an ensemble telling a great story. It really depends on the project. There are a lot of great accolades that come as a leading man, and I like it. I lead a pack well, but I do like ensemble pieces, especially working with great actors. It's like any job — you get with a good team and you love 'em, it's the time of your life.

Do you have a project you want to do? What are your ambitions?

I have so many, [laughs] but I don't know where they are going. I'm an old-fashioned, back-in-the-day kind of guy, and I love the cinema from the '70s. Sidney Lumet and Paddy Chayefsky and plays by Clifford Odets and Tennessee Williams. I've done one or two of them. That's what I love about Tennessee Williams — those complicated women and men intertwined. There's just nothing like it. I don't have a specific target. I just go with the flow, but I like rich stories and complicated films. Denis Villeneuve does some great stuff. I liked "Prisoners," and I actually enjoyed "Enemy" as well. I just wish he told you it was that kind of film instead of it being a crossword puzzle.

Do you have aspirations to produce?

I have been working on a screenplay for two years. It's very close to my heart and my experiences. It's part of my life, and some of it is imagination. I've been climbing that ladder to create my own content and where I belong in that world. But I also want to tell stories that mean something to me. I do want to do that.

Where do you get your confidence from? Brashness seems to be your default position.

From the devil himself! I'm telling you! [Laughs] The right bloodline. Some of us run fast, some of us freaking fix things. I'm just brash.

Connor gets maced in the face twice. You have a few fight scenes, are kidnapped, and shackled. Can you talk about doing physical work? You act with your whole body and seem very unselfconscious.

That's the interesting mystery behind some actors, the minute the camera turns on, we disappear, or the person we are disappear and we feel invisible and naked at the same time. It's more comfortable than reality. That sounds bizarre, but that's how it's become. It's kind of mind-bending. It feels more comfortable acting than being in reality and acting is more real than reality sometimes because people are all full of shit. You gotta go for it.

Do you prefer pleasure or pain — meaning, do you take the easy way out, or do you prefer an uphill climb?

What are the rewards? What are they dangling? That will inform the answer.

What do you want them to dangle?

Respect. I think there are ways to make money. I love money. Money is great. It solves a lot of problems. I never had any, now that I have some, and I never want to not have any money. The harder way depends on what harder entails. I like the stuff that challenges you and forces you to be vulnerable and show things in a different light that in reality we don't see between people. Because that's how we learn. Sometimes we can learn from movies. I know I did.