“The Simpsons” hasn’t declined due to bad writing; its outdated politics no longer make sense

The beloved sitcom reaches another milestone, but its nuclear family is trapped in a bubble that time forgot 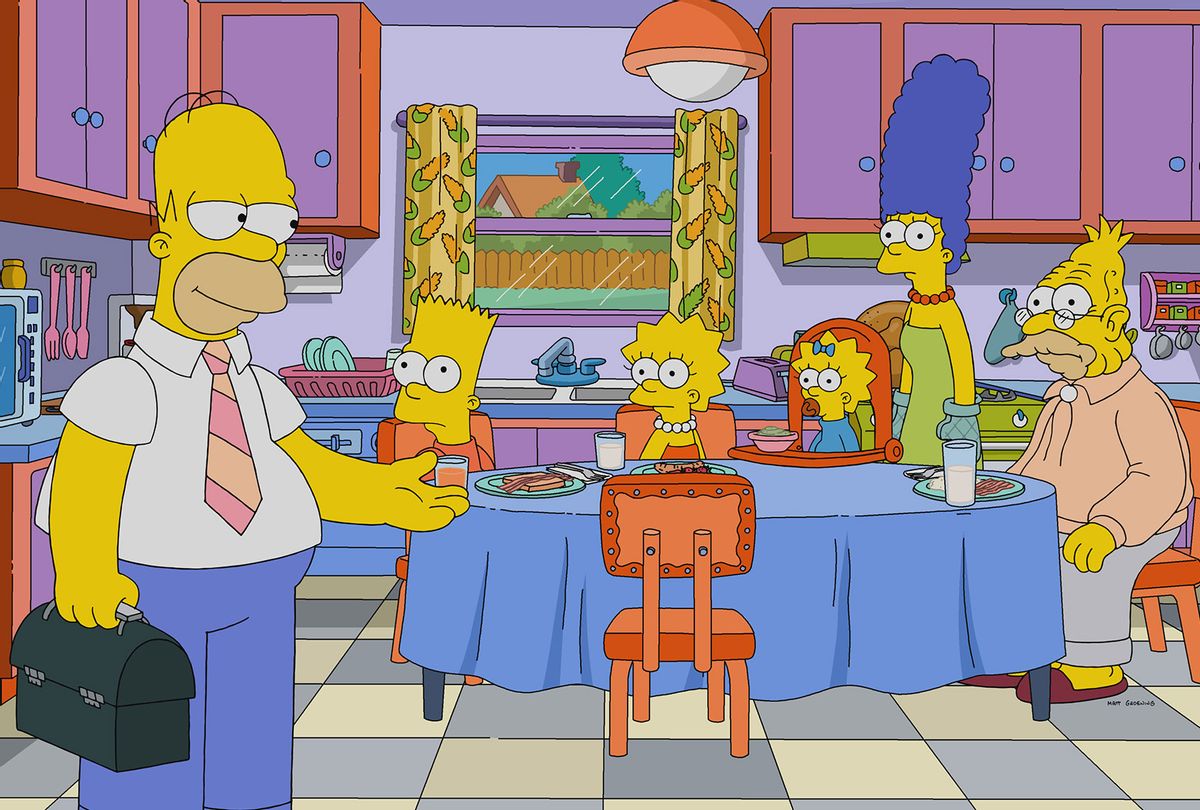 This year's "Simpsons" annual Halloween "Treehouse of Horror" special kicked off with a scene from election day in the titular family's fictional American town of Springfield. The family patriarch, Homer, stands in the voting booth pondering how to cast his presidential vote. "I know who I want for all the judges and propositions. But president . . . that's a stumper," Homer says as he stares at the ballot.

Seconds later, the moment is revealed as a dream sequence; Homer has forgotten to vote, and it is Inauguration Day, in 2021. Trump has been re-elected, and Springfield is reduced to an apocalyptic wasteland.

There are funny moments sprinkled throughout this cold opening, but the underlying joke is that Homer is so dunderheaded as to have almost no opinion about Donald Trump. That might not be surprising knowing what we know, over 32 seasons, about Homer's lovable brand of idiocy. Yet Homer isn't really a person; like all TV characters, he is an archetype and a stand-in for a certain breed of American male — a middle-class, unintellectual, aging, TV-addled, dopey blue collar white guy. And the notion that such a person would have absolutely no opinion about Donald Trump — would indeed have been so disengaged with politics in the past four years — is absurd.

This surreal and unrealistic political moment concludes a transition that has occurred in the beloved TV show over the past three decades. While the series celebrates airing its 700th episode on Sunday, many of the show's diehard fans stopped watching around Episode 200. Indeed, viewership has fallen linearly since the show's 12th season, aired in 2000 and 2001, from an average 14.7 million viewers per episode to about 3.11 million viewers in Season 30. In that span, both critics and longtime fans have decried what they perceive as a decline in quality of the show's writing.

There are many theories explaining "The Simpsons'" alleged decline in quality — so much so that figuring out exactly when the show jumped the shark has become a point of contention among fans, who have drawn elaborate charts and graphs to pinpoint what they believe is the precise episode past which it is not worth watching. Back in 2003, the year that the 14th season aired, Slate critic Chris Suellentrop wrote that the series had already entered its "halo" phase and was "in decline." The Simpson family, he wrote, "have become empty vessels for one-liners and sight gags, just like the characters who inhabit other sitcoms."

That was 18 years ago, meaning "The Simpsons" has faced accusations for two decades that its writing has become tired. As a longtime "Simpsons" fan and occasional humor writer, I count myself as a notable dissenter here. I don't believe that "The Simpsons" is losing its edge because it has become more jokey, or the stories less emotionally meaningful, or because of one or two specific writers joining the team (all prominent theories). Rather, I believe that "The Simpsons" has waned in relevance and humor because it came of age in a political moment that no longer exists. As such, its plots, stories, and family no longer make sense in this political moment; the show, thus, won't resonate.

Even when it is not explicit, "The Simpsons" has always been very political. When it first aired in 1989, George H.W. Bush was president and the Reagan era had just ended. Homer, Marge and the rest of the family were the archetypal middle-class family that existed in that decade, the last lingering days of the postwar boom. Back in the 1980s, a schlub like Homer Simpson could perhaps get a job in a nuclear power plant without a college degree, serve as the sole breadwinner of a family of five, and even buy a home. The show's writers in 1989 would have all grown up in the 1950s, 1960s and 1970s; hence, the Simpson family, and their cultural and political values, are drawn from that era.

Interestingly, the writers foresaw that a family like the Simpsons would have slowly become downwardly mobile as America became a more hostile place for the middle class as a result of financial deregulation, outsourcing, and the decline of unions. Hence, the family's economic situation is one of the show's constant underlying jokes; even in the pilot episode, "Simpsons Roasting on an Open Fire," Homer takes a second job in order to pay for Christmas presents for the family. The writers knew that the American dream — in which a dopey white man could aspire to the middle-class — was just starting to die.

But now, 32 years later, that American dream is beyond dead. It's a myth. The political situation that would have allowed the Simpson family a relatively stable middle class life was made possible by a robust labor movement, high taxes on the wealthy, a strong welfare state and the postwar prosperity that stemmed from U.S. industry having been untouched by the ravages of World War II. We are very, very far from that moment now.

Hence, guys like Homer could afford to be politically ignorant in the 1980s and 1990s, the early years of the show, because their lives had always been more or less okay. The American system was built for men like Homer. Because of that, Homer doesn't pay attention to politics of any material consequence, and instead his political views are generally aesthetic. To wit: Homer likes Ronald Reagan's mannerisms — he has a tape of Reagan rapping — and gets along well with Gerald Ford because of his similarly lowbrow tastes. He likes Jimmy Carter's brother because of his beer brand. (Fittingly, Homer does not like George H.W. Bush, whose prudishness irks him to the point that they get in a physical altercation.)

But if Homer were a millennial living today — as a recent flashback episode suggested that he was — his politics, livelihood, and social status would be very different. And the same goes for his family.

Consider how the Simpson family might look if the show premiered today: a white family of five, where the patriarch has a little college but no degree, would be unlikely to have a middle class life. That's because the share of wealth controlled by middle-income earners has shrunk precipitously since 1989, as the St. Louis Federal Reserve Bank notes.

Moreover, the average cost of a college degree has risen since 1987, from $39,643 to $103,616 in 2016 (both in inflation-adjusted dollars). That means that college-educated Marge would likely be saddled with far more student debt, and perhaps Homer too (who may or may not canonically be a college graduate, but definitely had to take some college nuclear physics courses after he accidentally triggered a power planet meltdown.)

Meanwhile, Homer and Marge, who are both in their 30s, would be far less likely to be homeowners. Few 30something couples would be able to afford a mortgage on a four-bedroom suburban home with a garage, basement and rumpus room — particularly on one salary. Because home values have drastically outpaced inflation, the average age of a homebuyer in the United States was between 25 to 34 in 1981, which is probably around when Homer and Marge bought in the series. By 2017, the typical homebuyer was 44.

It is also less likely that Homer would have been able to find a good union job. Union membership has declined since 1989, from 16.4% of the workforce to 10.5% in 2018. Union jobs provide better benefits, better job protections, and higher wages on average compared to their non-union counterparts. Perhaps those job protections are the reason Homer hasn't been fired from his job as a nuclear plant inspector, despite all his workplace transgressions.

So what might the Simpson family be like if the show premiered today? First, a downwardly mobile couple with three children would be unlikely to mortgage a large house, and unionized manufacturing jobs are far more scarce. More likely, the Simpson family would live in an apartment as they worked to pay down consumer and student debt. Marge might work as well in order to support the family; Homer might turn to multiple part-time jobs, perhaps gig economy-type gigs, to make ends meet. The expense of raising three children would make home ownership a distant dream.

These are not the kind of social conditions that produce apolitical individuals like Homer Simpson is written to be. To the contrary: a white family that has trouble affording a house, finding a good job, paying off debt and raising their children is apt to be extremely politically polarized nowadays.

In an attempt to understand what went wrong, and why he was consigned to a life of economic misery, television-addicted Homer might look for answers in the media most accessible to him. Perhaps he would find solace in the right-wing narratives of Fox News, and scapegoat immigrants or the poor or Democrats as the reason that his life sucks. Or perhaps he and Marge would be radicalized by a door-knocking group of democratic socialists, who would tell them how an elite ruling class rewrote financial and taxation rules to upwardly redistribute wealth. Indeed, the only political facet of the Simpson universe that might be the same in 1989 and 2021 is the town's woefully underfunded public elementary school.

This political reality, more than anything, is why it is harder to write well for "The Simpsons" nowadays, and more difficult to make plots and jokes that connect. Quite simply, the family's politics and lifestyle make no sense in today's world. In the early 2000s, Simpsons writer George Meyer commented that "the shows are more jokey than they used to be," and "lack the individual flavor that they had in the early years." But the jokiness might be an inevitable byproduct of trying to write for a family that is a caricature of something that no longer exists. In 2021, the Simpson family's socioeconomic situation is absurd, and so the style of humor must trend towards the absurd, too.