Over 36,000 Twitter users have indicated they want one. Is it because we're all starved for IRL conversations? 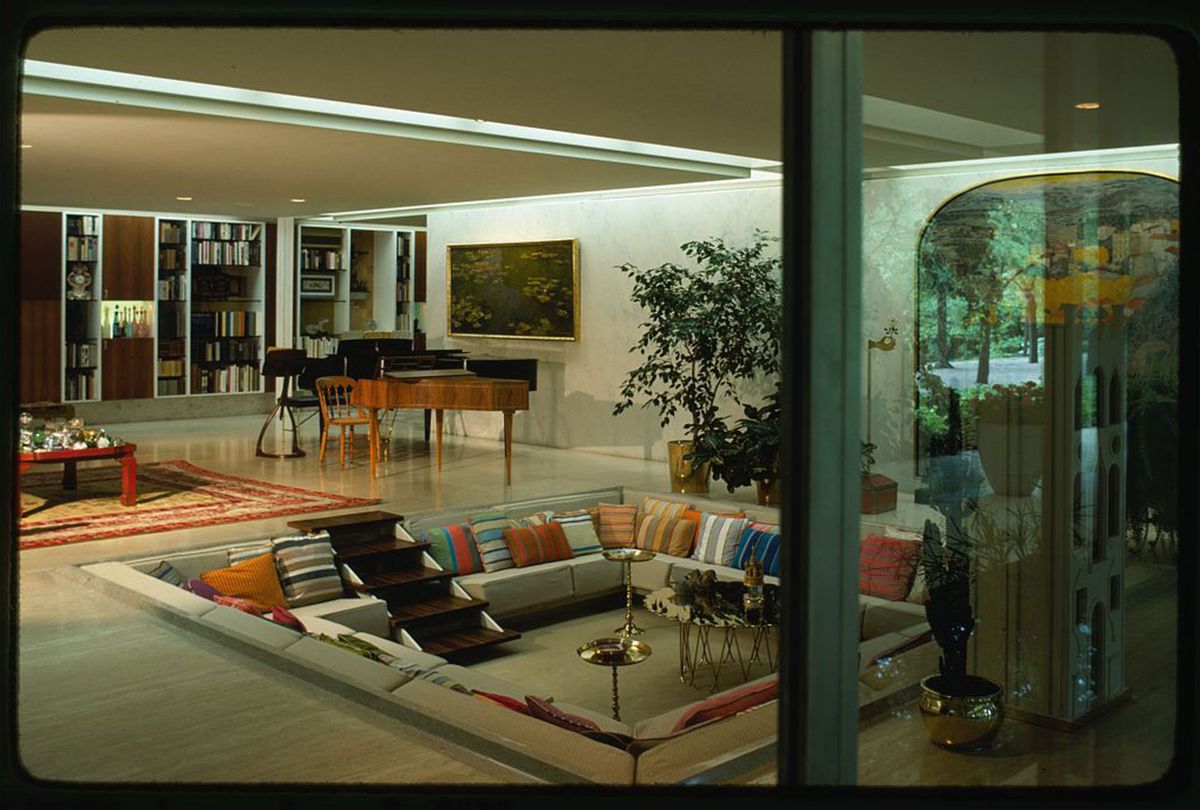 My boyfriend and I are in the process of renovating a house, a hulking brick structure that's been vacant on and off since the Civil War. Underscoring most restoration projects, I imagine, is a certain sense of anticipation for newness and completion, but the pandemic heightened this one with some weightier hopes.

Late last fall, for instance, we were laying a brick patio in the backyard and discussing what kind of outdoor furniture we should eventually buy. "Well, that set might make more sense if we had people over . . ." Having people over? What a concept! (This is said using my best impression of Natasha Lyonne in "Russian Doll.")

All the social isolation made the idea of having other humans in our space, closer than six feet apart, deeply appealing. If there are features and furniture that help facilitate that, all the better. That's one of the reasons that, when Twitter user @TheEnergeiaBoy sent the tweet "We must revive the inspired 1970s concept of the 'conversation pit," I was one of the almost 376,000 people who agreed — at least in theory.

This isn't the first time people have advocated for the return of the decidedly retro architectural feature, which incorporates built-in seating into a sunken section of flooring, but that tweet hit timelines in February, almost a full calendar year after the World Health Organization declared the novel coronavirus a global pandemic. At this point, I'd  gladly hop into what was often basically a shag-carpeted nest for the pleasure of an unmasked, IRL cocktail and conversation.

But could the conversation pit actually make a serious comeback in 2021? Or is simply the idea of it a Twitter-viral stand-in for the normal conversation-sized holes in our hearts?

One of the most iconic conversation pits is located in Columbus, Indiana, about an hour from my front door. In 1952, J. Irwin Miller and his wife, Xenia, commissioned a trio of architects — Eero Saarinen, Daniel Urban Kiley and Alexander Girard — to design their private residence there.

At the center of the home was a stone-lined sunken lounge, fitted with cushions, topped with bright pillows and accessible by four steps with no railing. In a speech he gave in Munich several years later, Saarinen described what he described as the "problem of furniture with it's inevitable 'slum of legs'" and said that he looked for opportunities to "eliminate it completely." The Miller House's conversation pit was an exercise in that, a feature that promoted intimate conversation without the interference of autonomous furniture.

"I love that in that sprawling space, Mr. Saarinen was so incredibly intentional about creating an intimate nook for dialogue," said Lucy Jones, a Lexington, Ky.-based preservationist and mid-century enthusiast. "For the folks who complain about mid-century design being too austere, a conversation pit is the  perfect solution. It maintains the clean lines of mid-century modernism with its geometry, but it's also downright cozy."

As a result, the pit was a hit, and its popularity skyrocketed even in less bespoke homes across the United States from the late 1950s through the 1970s. As the Tuscaloosa Times reported in 1977, "The conversation pit is very popular, mostly among younger people, because it's contemporary and very versatile."

The architectural feature made appearances in several "James Bond" movies. It served as the background for a bunch of 1960s liquor advertisements and, perhaps relatedly, quietly took on the nickname "f**k pit" in some circles  (let's just say it's no surprise that Don Draper's Manhattan apartment in "Mad Men" had a sunken living room).

As a reporter for TIME put it, rather sardonically, "while others went about frivolously at ground level, the more serious-minded could step down to form a sort of basement discussion group. Nontalkative families tucked pillows and blankets into it, called it a rest area. Some put the barbecue there, achieving a pit-within-a-pit effect. There seemed no end to the pit's potential."

But, like wood-paneled walls and popcorn ceilings, conversation pits eventually lost their luster.

"At cocktail parties, late-staying guests tended to fall in," TIME reported in that same piece. "Those in the pit found themselves bombarded with bits of hors d'oeuvres from up above, looked out on a field of trouser cuffs, ankles and shoes. Ladies shied away from the edges, fearing up-skirt exposure. Bars or fencing of sorts had to be constructed to keep dogs and children from daily concussions."

The eventual solution? A few cubic-yards of concrete and a couple of floor boards. The pit's legacy was briefly buried, only to be dug up again and again. Every few years, an article is published, heralding their renaissance. In 2017, Curbed wrote "Conversation pits make a comeback." A year later,

Apartment Therapy doubled-down on the idea with the piece "Trend Report — Conversation Pits Are Back." And a year after that, Dwell magazine published a photo essay, "The Conversation Pit Makes a Big Comeback in These Fabulous Modern Spaces."

On the cover was a conversation pit, padded with stunning royal purple pillows in an otherwise sparse, white space.

That cover-worthy pit was designed by Craig Steely, a California-based architect, who, when we spoke on the phone, described how that photo has gone viral again over the last calendar year.

He continued: "And the funniest thing is, we put that pit in to solve an architectural problem."

Steely designed the home for Pam and Paul Costa who moved from Milwaukee to the Silicon Valley area — via their employment at Apple — in 2018. It's almost like a floating glass box, looking over a dense oak grove in the foothills of the Santa Cruz Mountains. Steely didn't want to disrupt the flow of the open-concept home.

"So we had to ask, 'How do you delineate space areas in a huge open volume that doesn't feel like things are just floating in a void?'" he said. "So it made sense for us to start creating zones by changing the heights of things and lowering things."

According to Steely, the conversation pit itself is pretty large at 14x14 feet square. But he didn't have to sell the Costas on the feature.

"It just seemed like an appropriate situation in this kind of situation," he said. "But I think, bottom-line, everyone was pretty excited about the idea of having a fully upholstered hole that you can just dive into. There's something visceral about it that's really exciting and fun, which I think is great."

Steely said that element of fun could be what is driving some of the talks of a conversation pit renaissance on social media. On Twitter, users are posting vintage images of pits, captioned with longing phrases like, "Wish I was having girl talk in the pit," and  "When I die, can it at least be in a 70s conversation pit?" "Animal Crossing" and "Sims" players are making sunken rooms for their characters, and I saw at least one person planning an eventual marriage proposal in The Wing's emerald green velvet conversation pit.

"The conversation pit is the opposite of COVID, the quarantine six-foot distancing thing, because — you know, you're in the pit," Steely said. "You're closer, you're kind of on top of people talking."

Jones, who also helped design the viral hotel room inspired by the '60s architecture in "The Queen's Gambit," agrees. "I  am a tremendous proponent of conversation pits and I think that now, while we're focused on reconnecting with people, would be the perfect time for them to make a comeback."

She continued: "During the pandemic, I think that a lot of us have started reimagining how we want our social lives to look. I for one, realized that there's no part of me that misses bar life. I do, however, miss my friends."

Will that actually translate into real-world requests from homeowners for contractors to start digging up holes in their living rooms? That remains to be seen. Lusting after conversation pits online may be one of those activities by which we marked the time during social isolation, like growing scallions on our window sills, whipping up dalgona coffee and baking heaps of banana bread.

But, as Jones said in her argument for their return: "What better way is there to entertain at home than in an architectural space specifically designed for interpersonal connection?"