"We've tried things that we're not sure are audience pleasers but are funny to us," says one late night show writer 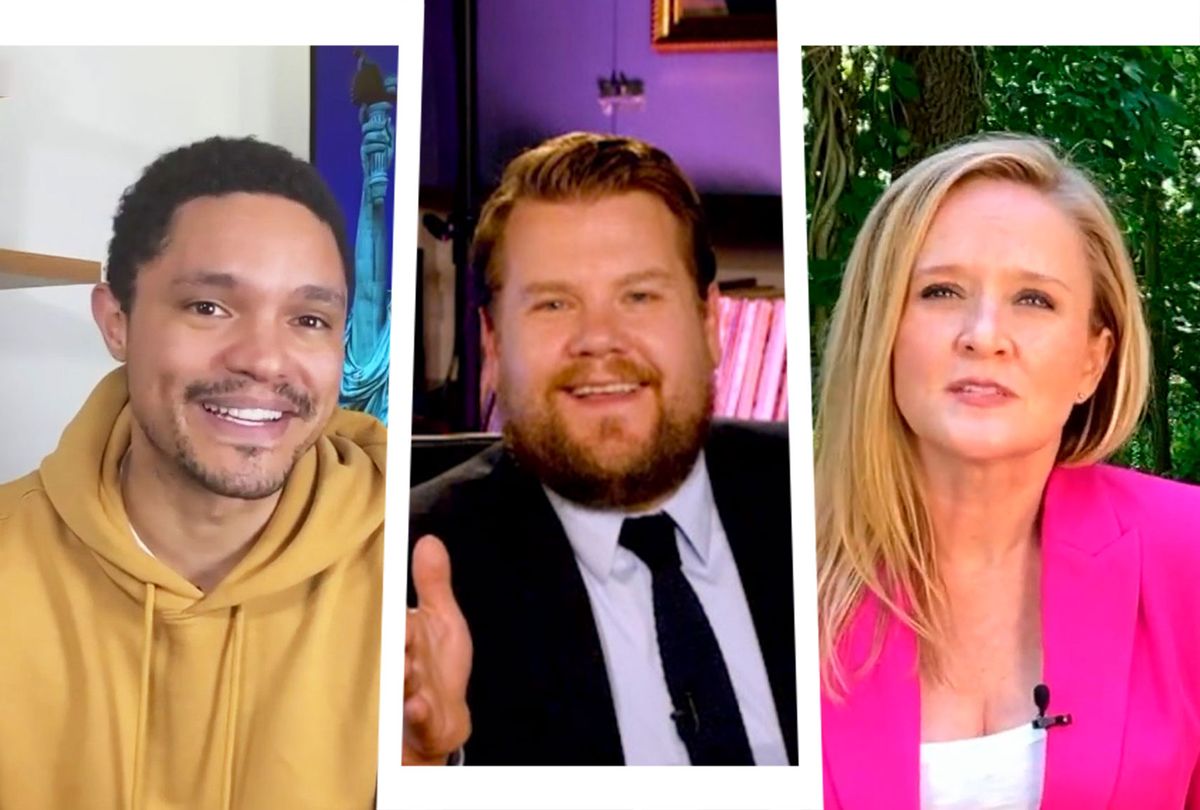 Kristen Bartlett vividly remembers early March of 2020, when "Full Frontal with Samantha Bee" became one the first topical variety shows to film without a studio audience. Back then nobody was sure how quickly the novel coronavirus that causes COVID-19 would spread, but cases were popping up in the city and across the country.

Then and quite suddenly, the situation switched from concerning to dire. "Our offices were one of the places in New York that had a cluster of COVID cases, which is crazy," the "Full Frontal" co-head writer said. The show's offices were ordered to be evacuated while they were in rewrites for that week's show, so they raced to shoot one final episode in-studio, grabbed all the equipment they could and headed home.

Rob Crabbe, an executive producer for "The Late Late Show with James Corden," remembers the tipping point being the NBA shutting down and a quiet, anxious text chain between the showrunners with various late night shows trying to figure out how their networks would respond.

In that nervous stretch of time, which coincided with a day of back-to-back tapings, he remembers appreciating what he describes as the "slight luxury in being the 12:30 show in Los Angeles," since the three-hour window between the West Coast and East Coast would give his production time to see how New York shows would react.

Initially he thought "Late Late" would simply stay on the air without an audience, as "Full Frontal" and other shows had done. "And then it all happened so immediately," Crabbe said. Corden, bandleader Reggie Watts and the rest of the crew got through that day knowing they wouldn't see an audience again for some time.

"I don't think we fully appreciated that we wouldn't be back together again for six months," he said.

In the earliest days of the pandemic, "The Late Late Show" came to viewers from a set-up in Corden's garage as that show and every other figured out how they would navigate the uncharted territory of live late night comedy without soundstages or sets.

One year later the COVID-19 pandemic still holds the world in its clutches, but CBS' "The Late Late Show" and TBS' "Full Frontal" have returned to their respective studios, as have NBC's "The Tonight Show Starring Jimmy Fallon" and "Late Night with Seth Meyers," and ABC's "Jimmy Kimmel Live!"  Their moods are lively but the hosts, correspondents and guest actors are playing to empty seats.

Meanwhile Comedy Central's "The Daily Show with Trevor Noah" and Showtime's "Desus & Mero"  went home and remain sheltered in place. Noah's series altered its title to embrace our collective lot – it's been "The Daily Social Distancing Show" since last spring.

Each program has settled into rhythms that are familiar to their viewers by now. Many follow the classic late night format. Opening with a welcome before diving into a monologue, barreling through gags before interviewing guests whether in person – six feet or more apart – or via video conference.

But the sensation that they're playing to empty theater seats, or none at all, is palpable. Prior to the pandemic we all took the live studio audience for granted. Now that they're gone, perhaps we have a new appreciation of the live crowd's role as a character in these shows. Circumstances forced that character to go on hiatus, changing the tenor of the late night and talk variety landscape.

"It is very different to tell a joke to a live audience than it is to tell a joke with no audience," said "Daily Show" supervising producer Zhubin Parang. "Telling jokes to an audience requires a different rhythm because you have to wait for laughter. It's slower paced. It's the difference between, like, theater and a movie."

This is not a fresh revelation, mind you. The call and response between performers and live audiences is comedy's fuel, driving hosts and writers alike. A live crowd's laughter bridges the distance between the studio production and viewers at home.  Without that, nearly every show has transformed into a new creature – not a fundamentally disparate from what was but certainly changed.

Noah's writers met the challenge of a socially distant production by taking more risks than they might with an live audience looking on, explains "Daily Show" executive producer and showrunner Jen Flanz. "Trevor will ad-lib a bunch more and try things, because it's just us watching him on Zoom at a shoot, and then it's us in our edit. It's such a controlled environment, whereas when you're in front of the studio audience, you pretty much need to know which jokes are going to work."

"Full Frontal" co-head writer Mike Drucker echoes this, pointing out that the lack of an audience has given writers the opportunity to be a bit weirder. "We've tried things that we're not sure are audience pleasers but are funny to us," he said, "and we also cut back on things that might be like moments where the audience applauds. We try to just make it straight through now."

This explains the appearances of odd characters that made the leap from writers room in-jokes to broadcast, like Bee's fictional attraction to a mailman or a weird character Bartlett named "Very Pregnant Grandma."

"If it makes Sam laugh, and that's good enough for us," she said.

Other hosts and writers close the gap left by the audience's absence with satire. On "Late Night" Meyers speaks to the crowd as he always has except when he asks how they – we – are doing, he longer pauses for hooting and applause that isn't there. He slip and slides right past his hello and into the monologue with a "How-is-everybody-doing-tonight-that-is-great-to-hear-let's-get-to-the-news."

Quarantine-era "Conan" has kitted out Los Angeles' The Largo Theater with cut-outs of people as Conan O'Brien deadpans his way through each show on a lonesome stage with Andy Richter situated nearby.

Stephen Colbert and John Oliver, hosts of "The Late Show" and "Last Week Tonight," respectively, aren't even pretending to address empty rows. They're staring straight through the fourth wall and into our living rooms.

In contrast, the eponymous hosts of "Desus & Mero" mainly speak to each other, even back when they were in-studio. This made head writer and executive producer Mike Pielocik more worried that the move to remote would throw off the chemistry between hosts Desus Nice and The Kid Mero than he was concerned about losing the audience.

"We were all pleasantly surprised that it didn't; the dynamic between the guys didn't feel different at all," he said, partly crediting the fact that their studio audience has always been small relative to other shows.

"Our show has always had a weird relationship with the studio audience," he added. "We loved having them there, and I really miss that kind of feedback, and everything. But I don't think it was ever critical to our show's success or even like working really."

Pielocik quickly added that when "Desus & Mero" can have a live audience, they will. "It's not that they're gone forever. But it's been really funny to see how much of our show in particular works almost just as well without a live audience in the studio."

From a viewer's perspective the same might be said of "The Daily Social Distancing Show" and "Full Frontal." Each responded to the loss of their audiences by changing their shows' pacing, experimenting with format or taking more chances with their humor.

"Full Frontal" returned to the air on March 25, 2020 with a show filmed in Bee's woodsy backyard. In the months that followed the producers played with animated segments, invited on music guests and broke their usual format in ways they hadn't before.

Since "The Late Late Show" has returned to the studio in August – and the audience still has not – Crabbe said that the writing had to become much more conversational. "Our show was always a 360-degree show where we were always using the audience," he said. "But now our crew and our band are our audience. They're the ones there with James to give reactions."

Crabbe adds that this has changed the writing style to leave opportunities for James and Reggie to engage with the writers and the crew. "We're all in there, six feet apart, wearing masks, but engaged," he said. "And so it's really been a nice way to involve the crew, and they've leaned into it as well."

With vaccination drives haphazardly rolling out across the country we may be heading towards a time in the not-too-distant future when the public will be welcomed back into each show's theater. But among the writers interviewed here there's a sense that some aspects of these distanced productions will remain part of that new normal.

Crabbe, for instance, foresees "The Late Late Show" retaining the conversational tone it has developed over the past year: "I don't think we'll ever go back to doing the sort of traditional style of monologue, because we've kind of grown into this," he said.

Drucker and Bartlett predict "Full Frontal" will continue to embrace the flexibility the current version of the show has opened up for them. Pielocik foresees incorporating more adventurous animations into "Desus & Mero" and getting the hosts outdoors a lot more. Parang and Flanz believe we'll be seeing Noah continue his one-man show asides where he plays various characters within the same segment. It will require more editing on the back end, they said, but they don't want to lose that gag.

All agree that nothing can replace the satisfying uplift a live audience provides. "It's such a different energy, the upbeat feeling of in the studio of, 'We did it, the audience is happy, they're laughing.' You hear them on the way out and it's awesome . . . just feeling like you made something together."

Parang seconded that. "The audience is who we're doing this for."