Women are being encouraged to go into STEM fields. Why aren't we pushing for more men in HEED jobs? 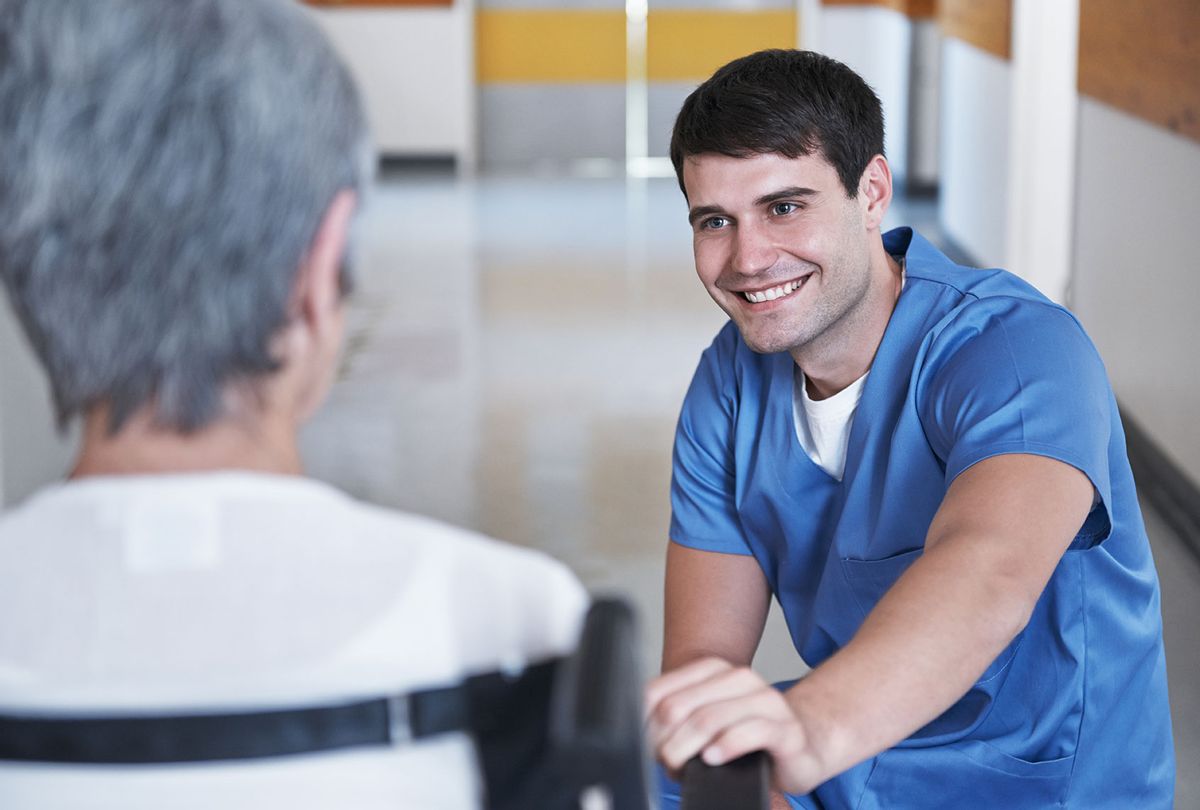 I remember when I first realized just how big the problem was. I was talking to a group of healthcare professionals about the need for better communication and compassion in medicine. "That," a male doctor in the room shot back at me, "is what nurses are for." And though he didn't say it out loud, the implication was hard to miss. That is what women are for, he seemed to say.

The past several years have brought a welcome and necessary push to bring girls and women in to male-dominated professions, notably STEM fields (an acronym for science, technology, engineering and mathematics). As Scott Barry Kaufman wrote in Scientific American, "the National Science Foundation has invested 270 million dollars since 2001 to multiple initiatives supporting women in the sciences." I've seen the effect of this push in the younger generation: my daughters went to Girls Who Code after school programs and earned Girl Scout merit badges in STEM skills.

Achieving gender parity in STEM fields is an admirable goal. Yet the converse isn't true: that there's been next-to-no effort to close the gender gap in so-called HEED jobs — healthcare, early education, and domestic work — where women are disproportionately represented. That's an unrecognized deficiency that shortchanges everybody.

According to the Bureau of Labor Statistics, while the field of postsecondary education is roughly 50/50 male and female, only about 1% of percent of preschool and kindergarten teachers are men. Women make up 80% of our psychologists and nearly 90% of our child, family, and school social workers. And in the healthcare profession, 87.4% of registered nurses and 88% of nurse practitioners are women.

There's a bias and a skepticism against men in caring professions, one that's not without some understandable foundations. In their 2018 University of British Columbia research article "Worth Less?: Why Men (and Women) Devalue Care-Oriented Careers," authors Katharina Block, Alyssa Croft and Toni Schmader noted that "On the one hand, men devalue care-oriented occupations (e.g., teaching or nursing) as personal career paths. But in addition, those men and women who do choose healthcare, early education, and domestic roles are afforded both lower status and lower salaries… HEED occupations are not simply unpopular career choices among men, they are also generally devalued in society." It's a brutal cycle: devaluing jobs because they're mostly done by women, and women being relegated to a specific class of jobs because they're less valued.

One big barrier to changing this imbalance is that male gender roles are more strictly enforced than female ones. A woman blazing a path in a traditionally masculine field may face a slew of unique challenges, but a best-case endgame has her in the role of a glass ceiling–breaker. There is no equivalent for a man in a "feminine" job. He may be paid more than his female colleagues — in fact he almost certainly will be — but his success will likely also come with outdated "Meet the Parents" jokes.

In their research into the concept of "Precarious Manhood," University of South Florida researchers Joseph A. Vandello and Jennifer K. Bosson outlined a three-pronged conundrum: "Manhood is widely viewed as an elusive, achieved status, or one that must be earned (in contrast to womanhood, which is an ascribed, or assigned, status)," they write. "Second, once achieved, manhood status is tenuous and impermanent; that is, it can be lost or taken away. Third, manhood is confirmed primarily by others and thus requires public demonstrations of proof." In other words, a man who goes into "women's work" has several hard earned bro points deducted from his identity, or worse, is presumed to be a creepy weirdo.

The solution to these biases isn't shutting boys and men out from these professions, but encouraging more of them to enter them. The benefits aren't just in potentially elevating the economic and social status of the work, or even in giving males who are curious about caring professions the space to pursue them. It's about trust.

Imagine what could be possible when we reinvent mental health care with more male participation. "Clinical efficacy in behavioral health comes down to the connection between a therapist and their client," says Jake Cooper, Co-Founder & CEO of Florida behavioral health group Grow Therapy. "We often see better connections, and accordingly improved outcomes, when a client is able to relate to their provider due to a shared identity, be it gender, ethnic, religious, or socioeconomic." He adds, "Mental health is not gender specific. Men are often reluctant to seek care due to the stigmatization around admitting vulnerability, and those who have the courage to are discouraged by the limited selection of male providers available."

Nearly a decade ago, psychologist Tyger Latham bemoaned the same problem in Psychology Today. "Men often present with specific clinical issues that relate directly to their masculinity," he wrote. Yet, "As many therapists have argued — including many female therapists — the profession is quickly losing its appeal to a large group of potential clients — most of them men — who may not initially feel comfortable working with a female therapist."

The same problems, and potential solutions, apply to nursing. "Boys, in particular, can find it hard to relate to women at times," Donna Fitzsimons, head of the school of nursing and midwifery at Queen's University Belfast, told The Guardian in 2017. "Sometimes a male nurse can really bring out a side of a child that helps to lift their mood and allows them to feel more comfortable in a hospital setting." And speaking to the New York Times in 2018, nursing student Adam White observed, "This narrative that men can't provide care in the way that women can is part of that broad cultural narrative that misunderstands what nursing's about. We need to talk with young people about caring as a gender-neutral idea, but also as something that's rooted in skills, in expertise."

There's nothing inherently womanly about so-called women's work. The fields of nursing and teaching, for example, were once all but exclusively male-dominated. And the absurd and unhelpful contemporary notion that jobs that require years of training and education somehow define their practitioners as surrogate mother figures holds everybody back. "It begins with redefining masculinity," says Dr. Kenyon Godwin (D.C.) owner and operator of the Active Family Wellness Centers in Texas. "Culture shapes it in sports, white collar and blue collar work, but it does not give much room for male caregivers and professions that require compassion and nurturing." And if caring is, as that doctor once told me, what nurses are for, then doesn't it make sense that jobs like nursing should be for everybody?