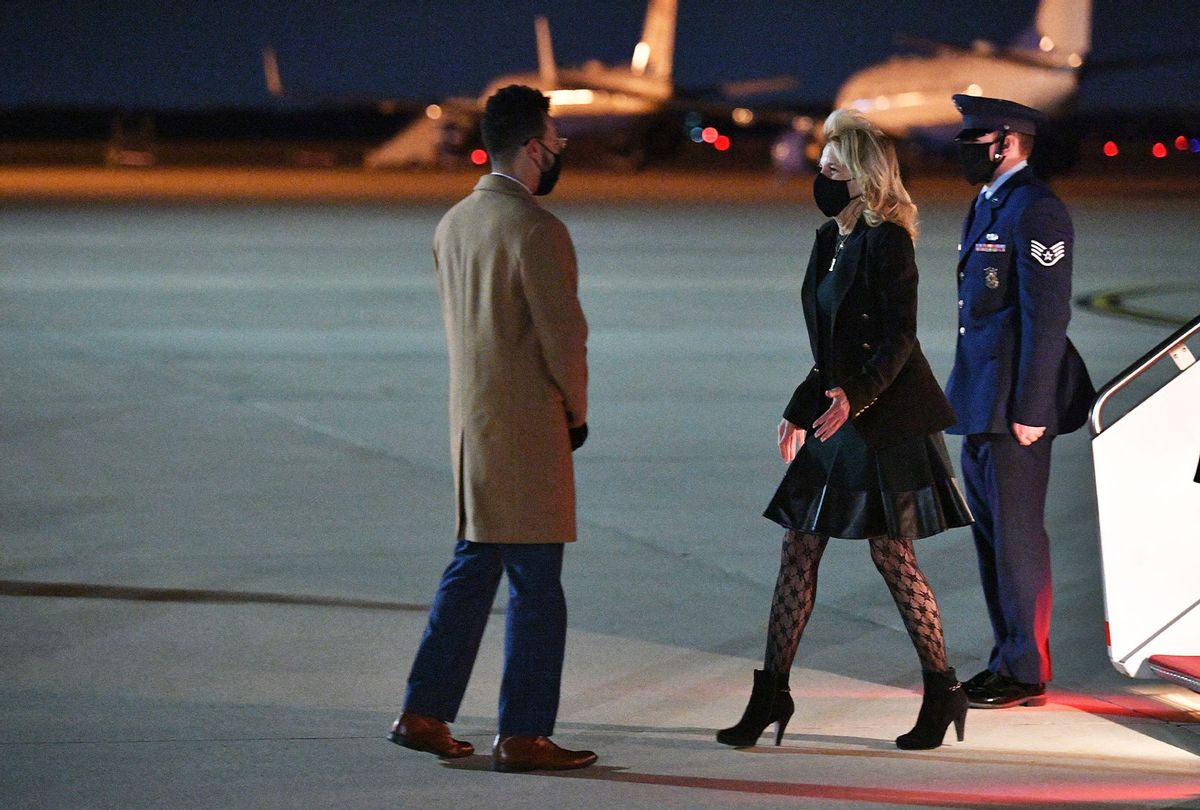 US First Lady Jill Biden deplanes upon arrival at Andrews Air Force Base in Maryland on April 1, 2021. (MANDEL NGAN/POOL/AFP via Getty Images)
--

Over the weekend, First Lady Jill Biden's patterned tights went viral on conservative Twitter. It began when a photograph of her deplaning at Andrews Air Force Base in Maryland — wearing a tailored black blazer, an A-line leather skirt, the aforementioned tights and black booties — was shared on the platform and a user likened them to "fishnet stockings."

It started a really nasty pile-on, underscored by a lot of Republicans drawing comparisons to former first lady Melania Trump; a couple of the tamer comments read, "Jill Biden is too old to be wearing fishnets. It's gross. Melania, on the other hand, would rock them," and "Madonna called and wants her trashy look back, Doc."

Biden's supporters were quick to defend her. "She is wonderful, you are jealous," one wrote, while another added: "She looked very chic."

For what it's worth, Biden's tights weren't actually fishnets. They were sheer tights with a geometric pattern — not that it should matter, obviously. However, the immediate backlash to Biden's outfit echoes past pearl-clutching, especially from conservatives, about what type of clothing is "appropriate" for the first lady of the United States.

It's an exercise that often speaks to a certain societal discomfort with reconciling cultural understandings of what femininity and power look like, and has since extended to criticism of how other women politicians dress.

According to Carl Sferrazza Anthony, the author of "First Ladies: The Saga of Presidents' Wives and Their Power," first ladies of the United States have held a "highly visible, yet undefined, position in the U.S. government."

"The role of the first lady, the U.S. president's spouse, has evolved from fashion trendsetter and hostess of White House dinners to a more substantive position," he wrote. "While there have been diverging views on the roles of women in society, the first lady is still a role model for American women. One of the highest-profile jobs in the U.S. government comes with no official duties, no paycheck, and almost limitless possibilities."

Inherent to that concept of being a role model is an understanding that the first lady will be, well, "ladylike." The meaning of that term has shifted some throughout time, though it denotes politeness and a certain demureness or docility. As such, it's no surprise that male politicians have weaponized the term against their female counterparts, like when Republican Todd Akin complained that his Democratic opponent, Claire McCaskill, was not sufficiently "ladylike" in 2012.

This expectation of demureness has long extended to FLOTUS fashion, which has ignited a number of fashion scandals throughout history. When Mary Todd Lincoln wore shoulderless, sleeveless dresses, she was criticized as "showing off her bosom." Several years later, the Women's Christian Temperance Union started a petition over Florence Cleveland's sleeveless gowns, claiming they were an immoral influence on America's young women.

While some first ladies have been criticized as being "frumpy" — Mamie Eisenhower with her pressed shirt dresses and Hillary Clinton in her pant suits, for instance — it seems that there's no bigger affront to being in a position of political power or prestige than being considered provocative. We've seen this reaffirmed over and over again as more and more women take office of their own.

For example, Alexandria Ocasio-Cortez has been criticized for her signature red lip – which she wears as a nod to Latina culture – as being too frivolous or seductive, a sentiment that was echoed by some conservatives when a video of her dancing in college was released hours after she was sworn in.

It remains to be seen, however, how or if eventual first gentlemen (FGOTUS?) will be judged by their attire. The closest search result that comes up when you Google "Doug Emhoff too sexy" is a lighthearted piece by The Forward, "Kamala Harris' husband Doug Emhoff is our hot Jewish dad crush," and we all know that male politicians' style choices rarely cause a blip on the radar. I don't think I've ever seen a commentator decry an especially vibrant red tie as too much for the House floor, for instance.

Yet in more recent memory, Michelle Obama ignited controversy by wearing a pair of shorts while exiting Air Force One at Grand Canyon National Park Airport which caused the blogosphere, as Time reported in August 2009, to explode with debates over whether they were "hot pants? Cutoffs? Booty Shorts?"

But in both situations you have commentators who seem intent on positioning certain items of clothing as more seductive than they actually are as a way to shame or discredit the women wearing them.

There is, of course, a certain amount of hypocrisy that comes from Trump supporters criticizing either Michelle Obama or Jill Biden over the appropriateness of their attire. Before marrying Donald Trump, Melania worked as a model and occasionally posed nude. Those photos ran on the cover of the the New York Post in 2016, during Trump's campaign.

The New Yorker's Adam Gopnik posited at the time that this was potentially done with Trump's knowledge, or even blessing, as the Post was resolutely pro-Trump. It could have been Trump's way, Gopnik wrote, of trying to lure his feminist opponents into "revealing their hypocritical readiness to turn on a woman with the wrong politics." That didn't happen.

"The photographs were received almost entirely without scandal, because, well, because education does happen, and change does take place, and even the most benighted among us, Trump quite possibly aside, now understand that a woman's body is hers to pose and have photographed more or less as she chooses, and that it is for the rest of us to respect her choices and to look or not at the photographs as we choose," Gopnik wrote.

It seems that Jill Biden's detractors could take that advice, as well.