The significance of the Bidens' conspicuous holiday cheer, especially for the Lunar New Year

This past holiday weekend was a world away from Melania's grim Christmases, but the contrast isn't just superficial 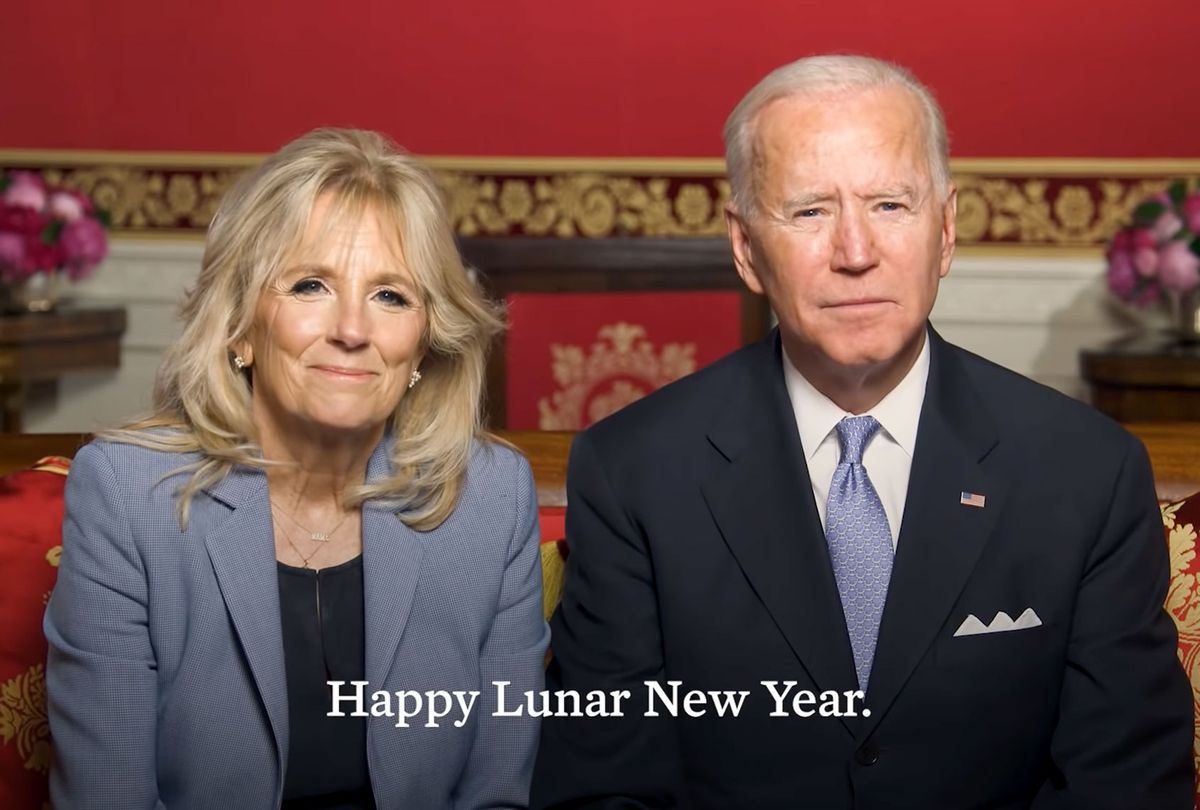 A Lunar New Year Message From The Bidens (The White House)
--

This weekend, there were three holidays crammed on the calendar back-to-back — the Lunar New Year, Valentine's Day and Presidents' Day — and their observance by the first family served as yet another opportunity for the Bidens to distinguish themselves and their collective values from the Trumps, likely to the particular displeasure of Melania.

It began early on Feb. 12 when, as the Associated Press reported, White House employees unveiled Jill Biden's Valentine's decorations on the North Lawn.

"I just wanted some joy," the first lady told reporters during a surprise visit to the lawn with President Joe Biden and their two German shepherds, Champ and Major. "I think things have been so — with the pandemic — everybody's feeling a little down, so it's just a little joy, a little hope, that's all."

The lawn decorations included oversized pink, red and white hearts, emblazoned with words like "Kindness," "Healing" and "Compassion." One of the hearts was signed, "Love, Jill."

This was just hours after CNN's Kate Bennett published her feature, "Melania Trump disengaged from her husband's second impeachment trial and bitter over Jill Biden's publicity." The piece discussed Melania's routine since leaving the White House for Florida on the morning of Biden's inauguration. She's living at Mar-a-Lago, going to the spa twice daily and, per Bennett, nursing a fair amount of resentment toward the attention Jill Biden has already received as the first lady.

The two women's styles for engaging with the American public through their roles as first lady are already markedly different. Jill has already been featured on the cover of several national publications and held at least seven events or speaking engagements since becoming first lady; meanwhile, during her tenure as first lady, Melania never did an interview with a national publication.

While Jill decks the White House lawn with heart-shaped decorations encouraging hope, Melania made waves when her former friend and senior advisor released audio from 2018 in which she stated, "I'm working my ass off on the Christmas stuff, that you know, who gives a f**k about the Christmas stuff and decorations? But I need to do it, right?"

This came after, as Tabitha Blankenbiller wrote for Salon, Melania's 2017 Christmas display, which was so grim and barren that it launched a thousand memes. "In a dress as white as her dead tree branches she wandered through a cursed forest throwing clawing, ominous shadows up the walls," Blankenbiller wrote. "The theme, 'Time-Honored Tradition,' was as contemptuous as her 'I Really Don't Care, Do U' Zara coat."

The difference in warmth is immediately perceptible, which underscores the ways in which the first ladies publicly engage — or don't — with their husbands' messaging.

"When Trump left Washington, she had the worst favorability ratings of any modern first lady upon departure from the White House, according to polling conducted by SSRS for CNN," wrote Bennett. "At one time, early in her tenure, that wasn't the case – Melania Trump was the most-liked member of the Trump family and the broader administration. But it's possible that Donald Trump's incendiary style, even though not necessarily something his wife condoned, had the residual effect of chipping away at the first lady's popularity."

Melania never publicly condemned the Jan. 6 violence at the Capitol, nor did she — despite being an immigrant — ever denounce her husband's consistently xenophobic rhetoric, which in the past year manifested in his calling the novel coronavirus the "China Virus." So much for "Be Best."

Contrast this with the Bidens' Lunar New Year message on Feb. 12.

"Amid the pain of pandemic, the loss of lives and livelihoods, we've seen another tragedy," President Biden said. "Racism, harassment and hate crimes against Asian Americans and Pacific Islanders. It's simply wrong — it's a stain on our national character. Every person, no matter their race, background, religion, or language they speak deserves to be treated with dignity and respect."

Jill Biden continued, saying that the Year of the Ox should serve as a reminder of the persistence and resilience of Asian Americans and Pacific Islanders. The Bidens used their holiday message both as an opportunity to condemn racist violence, as well as to portray a unified front.

This is pretty standard for first families, something that could have easily been forgotten during the Trump presidency amid the #FreeMelania furor and speculation driven by Mary Trump's book about whether the Trumps actually even like each other. As The Guardian's Arwa Mahdawi speculated in 2020, "It seems that no one hates the Trumps as much as they hate each other."

That kind of strife underlying the country's head office is unsettling, and was mirrored in Trump's public life; his — and Melania's — administration was one of callousness and coldness. That's why it means something to see the Bidens appear as a unified team, and why the normalcy of watching them, for instance, spend President's Day weekend together playing Mario Kart with their granddaughters ushers in a sense of sharp relief.

In his Presidents' Day speech, Biden said of managing the novel coronavirus, "If we do it together as one nation, one people, one America, we will not fail. America never has."

Much of what the first family does is for optics, of course, but in the case of the Bidens, it's easier to buy into the president's calls for togetherness and hope because of how he and Jill continue to engage with each other and the American people, much like they did this holiday weekend.