The First Lady has said she doesn't give a f**k about Christmas, and her chilling, forgettable decorations prove it 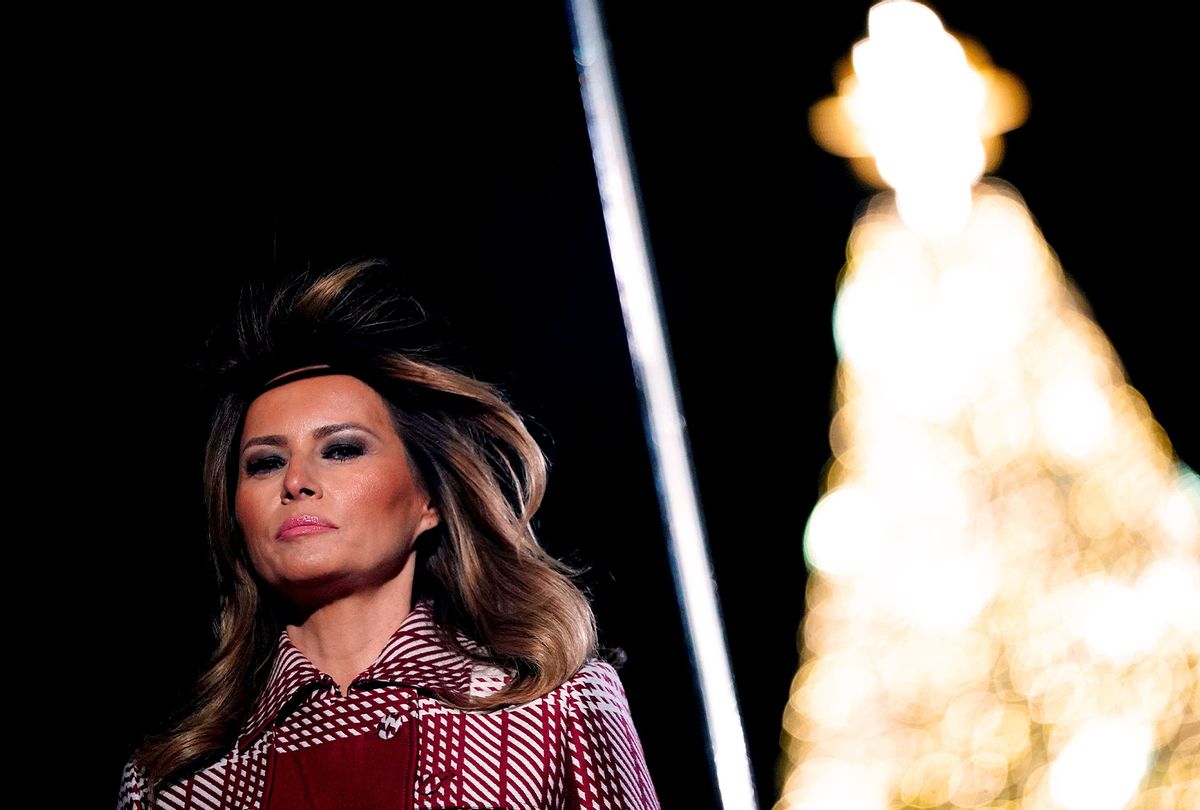 First Lady Melania Trump takes part in the annual lighting of the National Christmas tree on The Ellipse in Washington, DC on December 5, 2019. (MANDEL NGAN/AFP via Getty Images)
--

On Nov. 30, the White House unveiled Melania Trump's last Christmas decoration scheme. Not only was this lame-duck hall-decking her final expression of holiday pomp as First Lady, despite what her husband publicly proclaimed, but it came tinted with her own admission of hostility. On Oct. 2, her former friend and senior advisor released audio from 2018 in which Mrs. Trump states, "I'm working my ass off on the Christmas stuff, that you know, who gives a f**k about the Christmas stuff and decorations? But I need to do it, right?"

The décor, to the disappointment of snarky cultural commentators and Twitter, was a non-starter. Unlike the seasons past with their grim barren branches and "Handsmaid's Tale" cosplaying red trees, Trump's 2020 Christmas was as generic and unmemorable as this year has been unprecedented and difficult. "America the Beautiful" was the announced theme, a jingoistic phrase used as a title for everything from documentaries on the sexualization of American youth to the 50 designs of state quarters. The Christmas trees, in the familiar pine style, look ready for a stock photo shoot. Red glass spheres, gold ribbon garland, white lights. A family photo background with no family present, only a woman in gold examining the work of the unpaid help.

It's easy to dismiss this year's decorations because, even in the best-lit official White House photography, they're instantly forgettable. We know there's a lot on the Trump family's docket right now, with all the pardoning and undermining of American democracy, and Christmas decorating was clearly not the First Lady's favorite responsibility in the first place. If there was a year to phone it in, 2020 was the right pick.

But in a blink-and-you'll-miss-it shot cut into the official holiday 59-second video, that creepy East colonnade hallway of creepy Christmas past returns. This year it is packed with urns. Fifty, to be exact, said to display foliage from each state. With zero holiday context, the black urns evoke a sea of funeral arrangements. It's easy to overlook in the banality of the other rooms and trees with inoffensive subjects like Transportation and Wildlife. Until you notice, deep in the notes, that the crimson-walled Red Room decorations have been dedicated to first responders. As the official White House press release briefly explains, "We salute America's everyday heroes who serve as first responders and frontline workers. Handmade ornaments highlight the many professionals and volunteers who serve their communities with a spirit of generosity." As each day brings more COVID-19 cases, more deaths, more strain on our healthcare system resources, the White House cannot even mention the calamity by name with its small token tree.

Our Nightmare Before Christmas queen is right back at it.

In years past, Twitter and memes have laughed off Melania's bleak holiday decorating schemes as sad Soviet throwbacks. She grew up in Slovenia in the 1970s and '80s, which was at that time governed by the League of Communists of Yugoslavia. As an atheistic socialist state, Slovenia, with the rest of the Balkan nations, followed the USSR's lead in discouraging the celebration of Christmas on Dec. 25. This official stance remained until Slovenia's independence in 1991, five years before Melania immigrated to the United States on a visitor's visa.

This forbidding of Christmas, including a ban on decorated trees, has led to the false assumption by Westerners that Eastern Europeans and Russians dislike the holiday in the same humorless, utilitarian way we use to stereotype their disposition ("In Russia, television watches you!"). In fact Slovenia has a rich history of embracing and influencing the Christian traditions we're so familiar with here in the States. Their cities are covered in thousands of lights, often shining down on a thick blanket of snow. The holiday markets, hives of food, drink and gifts during Advent, are large and grand enough to rival those in Germany. Like Italy's panettone and England's fruitcake, Slovenia even has their own traditional Christmas bread — the potica, a sweet rolled Bundt-style cake filled with nuts, fruits and cinnamon. When faced with the Soviets and their Christmas cancellation, Slovenians didn't abandon their celebrations. They just scooted them down a week to New Year's, calling their gilded evergreens New Year's Trees and eliciting a big shrug from the powers that be.

Blaming barren, disturbing holiday decorations as being lost in translation doesn't shake out. Slovenian culture gives many f**ks about Christmas. Where, then, does this aesthetic hostility come from? And what does it mean?

Christmas decorating has been an official First Lady duty since 1961, when Jacqueline Kennedy unveiled the first themed tree in the Blue Room. She chose The Nutcracker ballet, and commissioned a collection of handmade ornaments depicting toys, birds and ballerina angels. Tracing the evolution of the White House Christmas tree and its decorations follows along in perfect symmetry with the styles and sensibilities we associate with each era's zeitgeist. In 1967, Lady Bird Johnson's tree echoed a more natural, handspun philosophy in line with hippie counterculture expanding its influence into the mainstream. The wildly colorful blue spruce was adorned with popcorn strings, daisy strands and cranberry garland. Ten years later, Rosalynn Carter worked with special needs Americans to create a tree exclusively of their artwork. In the 1980s, Barbara Bush's tree represented characters from children's books, tying into her personal literacy work. Michele Obama's first Christmas tree emphasized the need for environmental sustainability, using LED lighting and recruiting the National Parks Service to replant the trees after the holiday season.

Although the decorations have evolved significantly over the decades, they have consistently represented the nation at the moment. They do not represent the individual woman or the First Family; the focus is shifted onto groups or causes deemed worthy of attention. The point was to be inclusive, a festive arrangement for the nation.

This tradition veered off the tracks in 2017, when the Trumps came into power on a populist wave. Their administration made no secret that their main focus and priorities remained in their personal circles of family and loyalists. Keeping in step with her husband and well-appointed stepchildren, Melania made the 2017 holiday White House over in her own aesthetic. In a dress as white as her dead tree branches she wandered through a cursed forest throwing clawing, ominous shadows up the walls. The theme, "Time-Honored Tradition," was as contemptuous as her "I Really Don't Care, Do U?" Zara coat.

Because that's what is on full display here in the dead branches, the blood-red trees and the funeral urns. Trump doesn't simply fail to give a f**k about Christmas. Many Americans don't celebrate or enjoy the Christmas season. It's a fraught time of year packed with impossible expectations, the irrepressible rise of the past, and an obsessive focus on togetherness that is unavailable to so many of us. Loving the holidays isn't a prerequisite for being a compassionate and capable presidential spouse. It's safe to assume that, in the over five decades of Decembers since Kennedy's first master-plan, the White House has been home to a few women who have no personal fondness for gingerbread or tinsel.

However, each of these women allowed their staff and volunteers to create a representative display because it was an American tradition. A constant through years holding personal and national tragedies for all citizens. There is a comfort to seeing this ubiquitous landmark displaying the trappings of winter, of celebrating another year gone. These decorations hold space for that most idealistic of visions that one day out of 365 can be magical. It is one of the only days most Americans are sure to have off work, to spend with our favorite people — or at the very least, with our favorite takeout and streaming shows.  It's about as close to peace as we get.

By centering the image of the official United States White House Christmas into her own aesthetic, Trump harnesses yet another tool in the First Family's arsenal to attack the concept of a collective union. The past doesn't matter because it doesn't feed the tastes and ego of present power. The norms that have been unwritten for generations of leaders, decorum and expectations that are vital to keeping a nation of millions on an even keel, aren't just ignored. They're gleefully torched to the ground.

Tradition should not be immovable. Reinvention of our customs and adaptation is important. We should celebrate changes that make our winter celebrations more inclusive. It's important to continue honoring other holiday observances that go beyond a Judeo-Christian mentality. Conversations on how we can adapt the trappings of the season to be more sustainable are worth having. In nearly six decades of White House Christmas themes, there is an evolution of the familiar into the present. As important as it is to remain relevant to the wide United States audience, reinvention must be done in the spirit of expansion, not funneling the focus down to the aesthetics of one ruthless family that is openly hostile to any "non-believers."

Trump's contempt for our traditions is on full display not just in her first years of inhospitable decorating, but even in this, the supposed generic answer. The inoffensive trees, identical to those placed next to Santa at every suburban mall from East to West coast, are a phoned-in effort in a year the country needs extreme comfort. Not caring in her recordings, and in her practice. There is an emptiness that fails to pull focus. I've been staring at these photos for hours, and I still can't commit to memory what they look like. As unremarkable as the White House tennis pavilion project completed this week, joining the Rose Garden make-under as her permanent, pointless contributions to the grounds. It's a minor void of leadership in a staggering line of leadership voids, but it is another willful abandonment of the rhythms of American democracy and public ceremony.

A few steps away from the token First Responder tree, down the funeral home hallway, President and Mrs. Trump have chosen to continue hosting large holiday gatherings with a full calendar of December social events. As "America's everyday heroes" beg people to stay home and ease our overloaded healthcare system, the Trumps won't even condescend to requiring guests to wear masks. Melania doesn't need haunted, gothic arrangements to communicate her apathy for Americans. After all, what is materialistic hatred when you can put your heart into action this Christmas?

Tabitha Blankenbiller is the author of "Eats of Eden," a collection of essays about food, writing, family, sex, coming-of-age, and overcoming personal odds to live your best life. You can follow her on Twitter @tabithablanken.