A new civil war? It's here: The right's grievance politics is killing thousands every day

Right-wingers express their hatred by waving guns around, but spreading the virus was a much deadlier assault 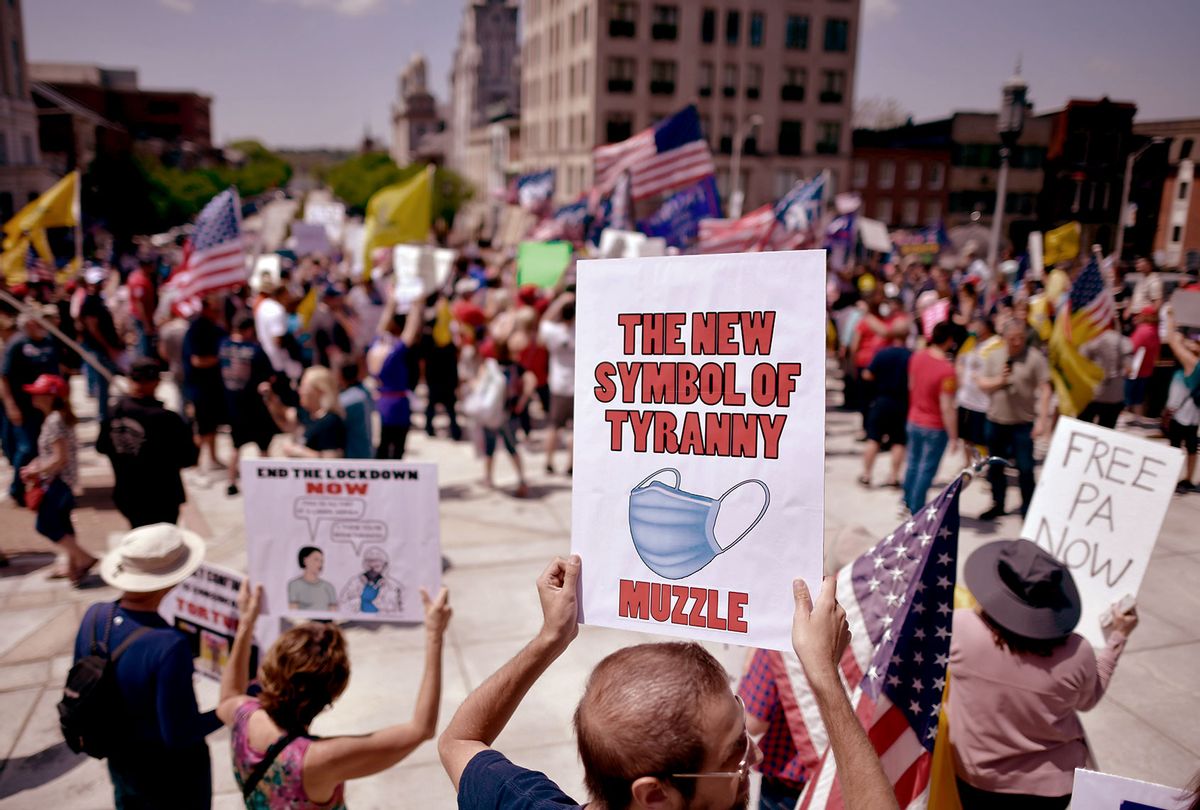 A demonstrator holds a placard with a face mask stating "THE NEW SYMBOL OF TYRANNY MUZZLE" rallying outside the Pennsylvania Capitol Building to protest the continued closure of businesses due to the coronavirus pandemic on May 15, 2020 in Harrisburg, Pennsylvania. (Mark Makela/Getty Images)
--

There's been criticism from various corners of those who make this comparison, but it's understandable why it comes so readily to mind. The startling juxtaposition is meant to jar people out of the tendency to let all those COVID-19 deaths become a faceless statistic. The idea is to get people to take the virus seriously, since it's far more likely to kill you than a random attack by terrorists.

But there's a political side to this, as well: Liberals or leftists who draw this comparison are trying to draw attention to conservative hypocrisy. The Republicans who are pooh-poohing mask-wearing and social distancing are the very same Republicans whose panicked and partisan overreaction to 9/11 led us into two disastrous wars. If the deaths of 2,977 people in one day from a terrorist attack was so world-changing , why do conservatives refuse to treat the death toll of this  pandemic seriously? As difficult as this is to process, the coronavirus has killed nearly 100 times as many people as died on 9/11.

The answer, unfortunately, is because of the American culture war, which is getting uglier and more uncontrollable all the time. While the right used to mock "identity politics," the tribal sense of identity among conservatives seems to trump all other considerations these days. Displaying such tribal loyalty by attacking and antagonizing liberals matters more to many conservatives than their own health and safety. That's doubly true in the face of a disease that is disproportionately affecting poorer people and people of color, allowing white conservatives to imagine that their "tribe" is not being hurt by the pandemic.

For years now, we have lived amid rising fears of right-wing domestic terrorism, and for good reason. There have been multiple deadly terrorist attacks — such as the mass shootings in El Paso and Pittsburgh — inspired by Donald Trump and the white nationalist rhetoric he helped mainstream. Wannabe terrorists were caught plotting the kidnapping of the governor of Michigan. The "boogaloo" movement of angry white men is openly gunning for a new civil war. Some commentators worry that American politics have become so bitter and polarized that such a violent internal conflict could actually happen.

In a very real sense, the civil war has already come, just not in the fashion that we imagined it. This pandemic that's washing across the country is, in many ways, a manifestation of the same tensions that have led to fears of terrorism and civil war. One major reason why the pandemic is so bad in the U.S. — which has more cases than any other country in the world, and consistently rates among the worst 15 countries on a per-capita basis — is what the press delicately calls "partisan divisions."

But let's face it, the real problem is the American right, and its profound loathing for a rapidly changing and diversifying country. From the very beginning of this pandemic, Trump, his supporters and the right-wing media have prioritized sticking it to the liberals over saving their own skins. In the end, grievance-mad conservatives — furious at a majority that rejects their claims to cultural superiority — didn't have to pick up a single weapon. All they needed to do was refuse to take this pandemic like the public health emergency it is.

Research has borne this out. A paper published in Nature on Nov. 2 — and therefore lost in the election media frenzy — showed that partisan identity was a stronger predictor of how people reacted to the coronavirus than factors like age, race or the severity of the virus where they lived. Researchers hoped that conservative reluctance to practice social distancing would decrease as the pandemic grew worse, but the opposite happened. Conservatives grew more likely to take risks, not less. High levels of right-wing media consumption made refusal to take basic precautions much worse.

But individual behavior is only a small piece of the puzzle. Republicans' tribal hatred of liberals and total-war approach to partisan politics is probably the biggest single factor in why the coronavirus spiraled so badly out of control.

This didn't happen just because of Donald Trump and his tendency to see the pandemic, and all measures to contain it, as personal affronts to be angrily resisted at every turn. Senate Majority Leader Mitch McConnell, motivated by his desire to maintain his enormous power in Washington, has been flying more under the radar, but the damage he's doing is at least as bad.

McConnell has made it obvious for months that his goal is to pass no coronavirus relief bill at all, or to gut any such bill so thoroughly that it barely helps anyone below the CEO class. He clearly feels that blocking such a bill will lead to no political blowback. In part, he believes he can pin the blame on the Democrats, and also that voters are so bitterly divided along partisan lines that not even a massive economic catastrophe and hundreds of thousands of deaths will turn Republican voters against him. After all, he has the 2020 election, when 74 million voters turned out for Trump — and Republicans made unexpected gains in down-ballot voting — as proof of that.

McConnell's refusal to pass a meaningful relief bill hasn't just caused economic devastation. It has also contributed to the massive death toll. First, because the lack of any real relief has stymied the national health care response, for lack of funding. Second, and perhaps more important, the lack of economic relief has forced thousands of businesses to remain open and forced millions of workers to go to work who might have otherwise been able to stay home. Far too many people have been forced to choose between a paycheck and their family's health, and are out there doing service-industry jobs that expose them and their loved ones to the virus.

The boogaloo boys got their civil war. It didn't come in the form they expected, and it lacks the drama of bullets flying on battlefields. But the actual death toll has surpassed that of all American wars except World War II and the actual Civil War. Of course the coronavirus was coming to our shores one way or another, but what has made it so devastating to America was the ingrained rage and tribalist identity politics of the right. Just as with civil wars that are fought with bombs and guns, the price is being paid by everyone, not just those who fired the first shots.