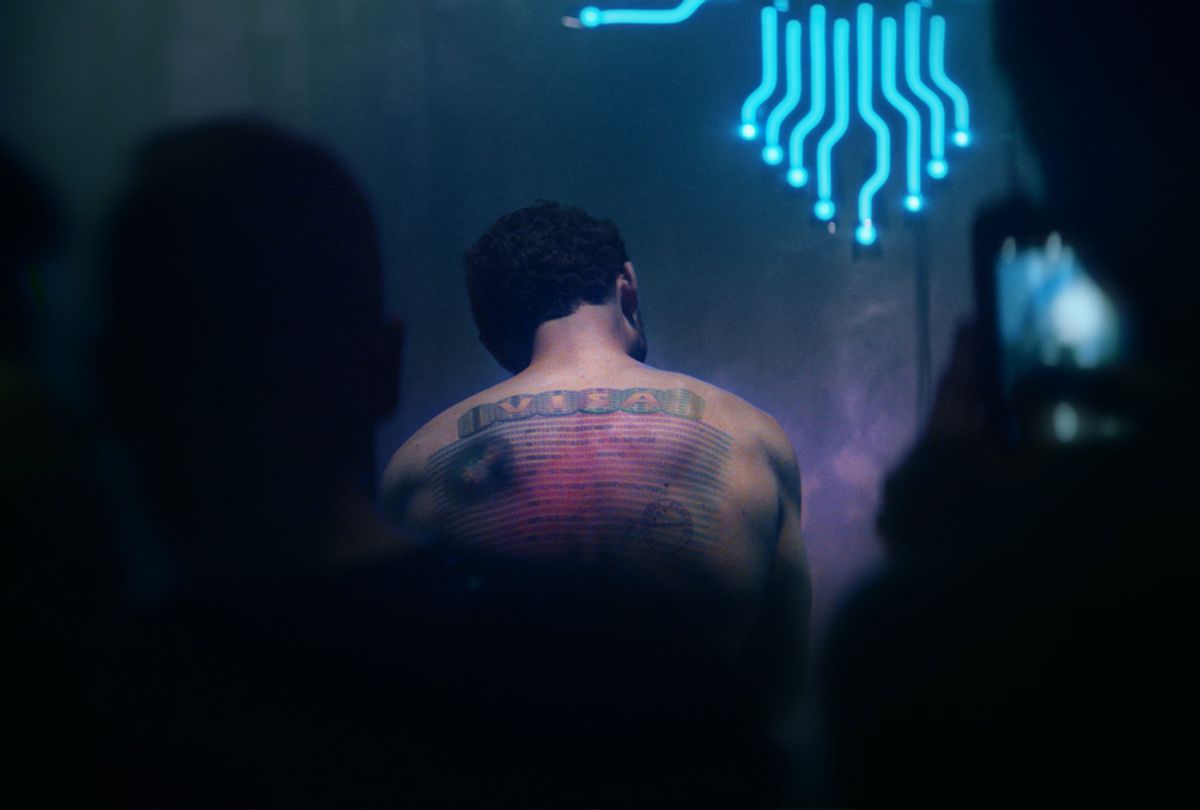 If there is any justice at the Oscars, "The Man Who Sold His Skin" would get the Best International Film Award. Tunisia's entry — the country's first to score a nomination — is arguably the most provocative of the five entries and a longshot for the prize. (Denmark's "Another Round" is the favorite.) The film, which is currently screening is select cinemas around the country, is also now available on demand.

Written and directed by Kaouther Ben Hania, the story opens in 2011, and concerns Sam Ali (Yahya Mahayni, excellent), as a Syrian in love with Abeer (Dea Liane). After he is unfairly arrested, Sam must leave Syria. He ends up a refugee in Lebanon, and meets an artist, Jeffrey Godefroi (Koen De Bouw), who makes a deal with him. In exchange for letting him to tattoo the Schengen visa as a work of art on Ali's back, Jeffrey can help Ali, get to Belgium where Abeer now lives with her husband, Ziad (Saad Lostan). Ali eagerly agrees, but soon comes to see the double-bind he is caught in: Abeer is not able to rekindle their romance, and Ali's job as a work of art on display, even being bought and sold, is restrictive.

As "The Man Who Sold His Skin" plays out, there are discussions of art and exploitation. As Jeffrey turns a man into merchandise, this leads to accusations of enslavement and human trafficking, as well as questions of humanity and freedom. Is Sam someone's property, or can he have agency?

Kaouther Ben Hania spoke via Zoom about her film, which is loosely inspired by the real story of Wim Delvoye's artwork, "Tim."

Congratulations on your film and your nomination. What observations do you have about representing Tunisian cinema at the Oscars — especially as this is the first film from your country to have that honor?

It means a lot. It's kind of historic. I'm very proud to represent not only Tunisia, but the African continent and all the Arab-speaking countries. It's just amazing. In my country, they are very happy about the nomination, so it's already an achievement. But everyone is telling me they want me to win — as if it's not enough to be nominated. There's this pressure! [Laughs]

When you made the film, did you ever expect to be nominated for an Oscar?

To be honest, I never thought about the Oscars. It's something not in my realm of expectation. [Laughs] I was thinking about Cannes, things that are closer to my surroundings. Since my previous film ["Beauty and the Dogs"] was submitted by Tunisia, we submitted this one also. I never expected to be shortlisted, because I understood the Oscars need campaigning and advertising and money that we don't have. For me, it was just for the participation. I was more surprised by the shortlist than the nomination. It seems strange, but because you have 93 submissions, and since we didn't campaign, I never thought we'd get through this first round. But voters discovered the movie. Folks who saw it advised the French voters to see the film, so word of mouth between voters happened, and that is a big compliment for my work, this underdog, to be discovered. Since we were shortlisted, I thought maybe we could be the nominee since we crossed this crazy line of 93 movies. I'm very happy.

What can you say about campaigning? How have you managed in this strangest of years?

Since we have been nominated, Samuel Goldwyn, our American distributor, decided to release it in the theaters because theaters are re-opening in a small way in the U.S. We are promoting it for a theatrical release, which can also serve as the campaign. When the film was nominated, people on the internet where asking, "What is this film? Where can we see it?" So now it's in some theaters in New York and Los Angeles and it will be on VOD quickly so more people can see it.

"The Man Who Sold His Skin" is all about hiding and visibility, not only regarding the character's journey of being invisible or been on display as a canvas, but you also convey this in the way you shoot the film — your composition and framing. Can you talk the visuals in your work?

I love framing and composition. These are cinematic tools to tell the story. I love telling the meaning of the scene, or the inner feeling of the character, though composition. Sam is a representation of something, so when you think about representation, you think always about the image, or the mirror. He's always put in a box. He starts his journey in jail and, later in the film, he is jailed. He is jailed all the time — by the dictatorship, then his situation as a work of art. He is always put in a box. I tried to surround him in a small frame in the frame or reflect his image.

Likewise, the film is also about the power of words. Sam gets arrested for something he says that is taken out of context or says something he doesn't mean. How did you focus on this aspect of his character?

I love the contrast between what character is saying and what they are hiding, and trying not to say, this subtext. I love it when words are uncontrolled — Sam starts shouting in the train — he's an impulsive guy saying things that are dangerous. Cinema is a wonderful way to play with this and give meaning to a situation.

Your film is also a story of freedom and exploitation. Can you talk about Sam's agency?

There is a difference between being free in your head and with your emotion and being surrounded by constraints and deals and having ways to behave imposed on you. Being in a non-free situation, you have a clash between your desires. Sam can't stay still. He is always moving. As a work of art, he is asked to stay still. They try to put him in a box and he's always trying to move out of the box. I love that contrast between Sam as a person and the environment he is in. It makes things harder for the character.

"The Man Who Sold His Skin" is at heart, a love story. What observations do you have about the romance in the film?

I thought, what is the most important thing for Sam? He's a romantic, and almost coming from another epoch. There's something very chivalrous about him. This doesn't fit with the coldness and materialistic world he is in. He's a very special character. He did this thing to join this girl, knowing that it is hopeless. We understand this decision even though it is not very reasonable. I love filming longing, because it's all about unfulfilled desire. It's a strong emotion. Filming this, and telling the actor how to incarnate this longing, and making a film on this theme was a great pleasure.

"The Man Who Sold His Skin" also examines questions of value and the price we put not only on things but on people. How do you think that idea of value resonates?

We all live in a triumphant era of capitalism and ideology around the world, and when we talk about valuing something, it's about a price and how to get the money to buy this thing or that thing. Since Sam is not comfortable with this cold conception of the world, he values love — impossible love and lost love. He's not rational. He's doesn't want to obey the codes of the world we live in.

What is the value of a human being? I can say there's no priceable value for a human, so it's invaluable, but it is this state of being invaluable that you have people who have more of a chance than others or have had more luck and an easier life depending on where they are born. As Sam says to Jeffrey, "You are born on the right side of the world."

When you are a refugee, you want the system to accept you. Sam says to his friend [at a chicken sexing factory], we want to be like these chicks. At least they have a system, and they have the protection of the system. They want to have the value of a chicken in a factory in a metaphoric way.

What do you think this nomination will mean for your career?

I hope it will make it easier for me to make films. It was very complicated for me to make this film. It was a long journey to finance it. So, I hope after this nomination, financiers will trust me more, so I can do my projects with less struggle, and put my energy in artistic work rather than putting it in convincing folks to make it.

"The Man Who Sold His Skin" is available in select theaters and on VOD.