I used to advocate for police reforms, like better training and oversight. I no longer believe that's enough 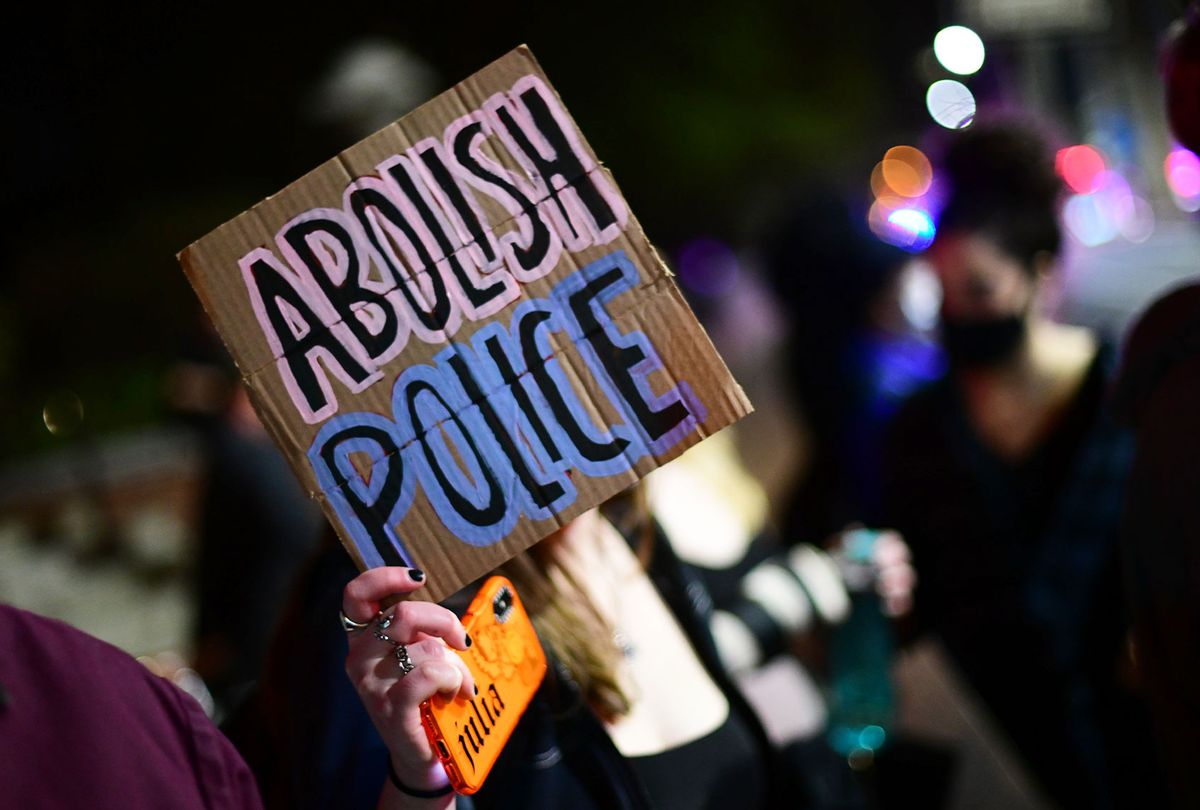 A placard states "ABOLISH POLICE" during a march to protest the death of Daunte Wright on April 13, 2021 in Philadelphia, Pennsylvania. People have taken to the streets to protest after Daunte Wright, a 20-year old black man, was shot and killed by police in Brooklyn Center, Minnesota. (Mark Makela/Getty Images)
--

The evidence is clear. Police Brutality cuts off years from Black people's lives. It is a leading cause of death among young Black men. It makes Black women sick. Police brutality makes it less likely for people to seek and receive the health care they need.

We are tired of hearing that Derek Chauvin, Kim Potter, and other individual police officers must be held accountable. Of course they should. Most often, they are not. Even when they are held accountable, the system of policing remains in place. The truth is that every time police brutality causes death, we will all sing the same sad songs and dance the same angry dances. But the system will still be in place, maybe with some changes — requirements like wearing body cameras, money for anti-bias training, and recruitment of a more racially diverse police force. Yet, the core of the system remains in place.

The system of brutality, rooted in the origins of policing — patrollers trained and paid to monitor and harm Black people who dared to wander off the plantation, who dared to escape torture, who strolled in the city without a pass, or who just wanted to stay alive during the eras of enslavement and following emancipation.

The system of enduring ideas that Black people are a threat to be controlled and neutralized. That we must be policed, kept guard over, and kept watch on by the state. Ideas that Black lives are lacking in value and Black bodies are not worthy of respect. The system of processes necessary to enforce these ideas, as well as the structures in place to sustain them.

The brutality of pressing a knee on the neck of a Black man for 9 minutes and 26 seconds, of pepper-spraying a nine-year-old child in an emotional crisis, and needing to use a taser on an unarmed 20-year-old who was within close range of three officers. The system that militarizes police especially in communities of color, and affirms police readiness to shoot.

The system of policies that segregate people into different neighborhoods based on race, label neighborhoods where Black people live as high crime neighborhoods, causing police to target these areas and increasing the likelihood of residents being killed during encounters with the police.

The systematic underfunding and policing of schools in disproportionately Black neighborhoods where students' first contact with the criminal justice system is due to minor delinquencies on school premises. Contact that then increases the likelihood to have encounters with the police that even when not fatal, are harmful to the health and well-being of Black people.

We must dismantle the system. Holding police officers accountable is not enough. Indeed, former South Carolina police officer Michael Slager, who shot and killed Walter Scott, was held accountable. Yet, the system remained. Hundreds of Black people have since been killed by the police. We also know that implicit bias and de-escalation trainings do not change police behavior. Body cameras help document what happens, but they do not ultimately prevent police brutality. Diversifying the police force is not the answer either.  For example, when a nine-year-old girl was pepper-sprayed in Rochester, NY, the police chief was a Black woman. We cannot say we have a seat at the table when the police table was set to water the lynching tree.

About five years ago, I advocated for some of these reforms — training, body cameras, diversifying the police force, and community oversight of police departments. I now believe that there are simply not enough. Not enough to keep Black people alive, not enough to prevent them from the horrific mental distress that comes from the mere anticipation of police brutality.

Let's dismantle the entire system and start over with a model for public safety that was not created to uphold white supremacy and devalue Black lives. If not, then the outrage by politicians and policymakers who are maintaining a system that is in service to white supremacy is hypocritical. We are sick and tired of it.