In comedy "Rutherford Falls," Ed Helms is a nice guy who prefers the myth of his whitewashed history

The creatives behind "The Good Place," "Parks and Rec" & "Brooklyn Nine-Nine" bring this sweet yet sharp new series 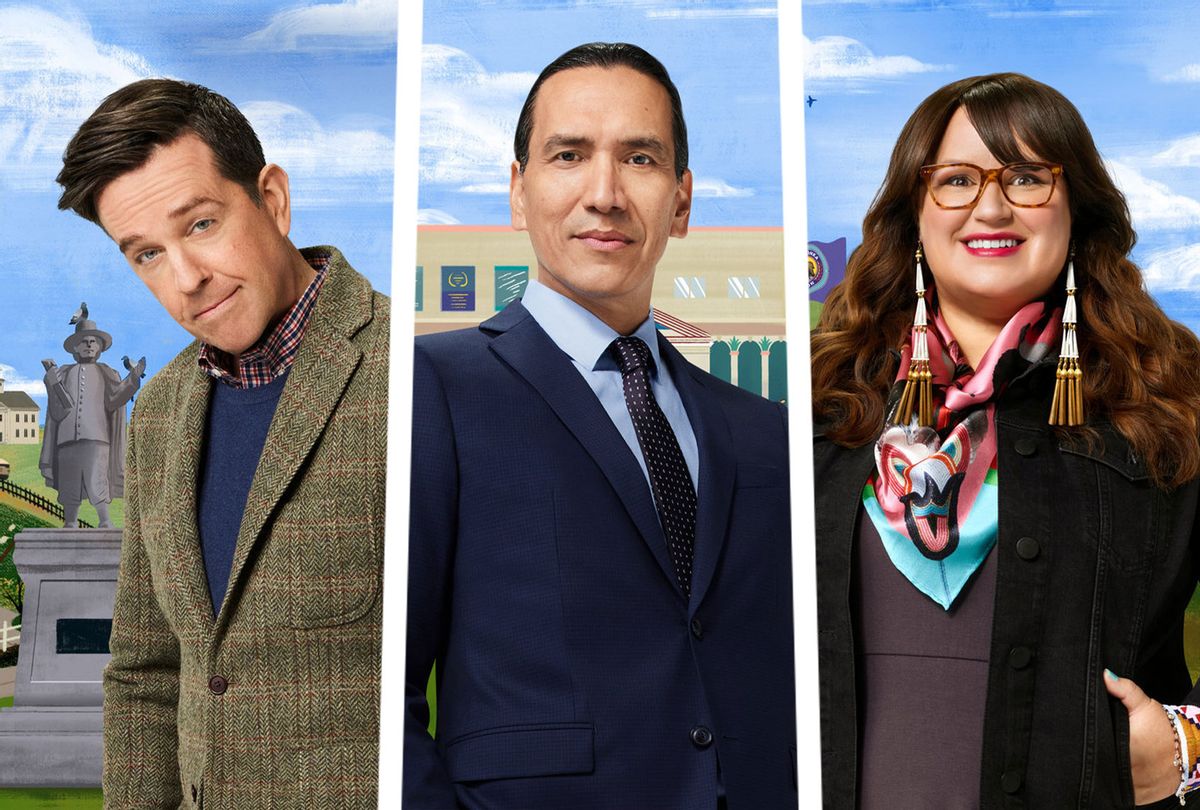 Four episodes in, comedy "Rutherford Falls" builds a strong case finding in favor of Terry Thomas, played by Michael Greyeyes, as the show's real hero. This doesn't make the man who runs Running Thunder Casino the show's funniest character, although Greyeyes lands his share of jabs and punchlines with a boxing champion's lightning speed.

Neither the character nor Greyeyes receive top billing in this comedy — that honor goes to Ed Helms and Jana Schmieding, who play lifelong best friends Nathan Rutherford and Reagan Wells. Nathan and Reagan are a pleasant, bumbling pair who support each other, no matter what, even though (and, yes, because) they aren't the most popular folks in Rutherford.

Nathan has taken on the role of the town's historical preservationist and the last Rutherford still living there. Reagan wants to put her Northwestern degree to use by expanding the Minishonka Nation's cultural center into something more than a sadly lit corner in the casino that's frequently mistaken for a low-inventory gift shop.

Terry, in contrast, is calculating, politically deceitful when he needs to be and entirely about business, and understandably so. He could find money for Reagan's gift shop, but won't. He could help Nathan maintain his hap-hap-happy version of the town's history, in which the Minishonka (a fictionalized tribe) ceded their land to genial white settlers in a fair and equitable deal — but, please.

Instead, he's focusing on the long game in which he and the entire Minishonka tribe benefit from his lifelong dedication to what he describes as "the great American pastime": power.

If Terry were white he'd be at the center of a narrative celebrating his determination and will. In "Rutherford Falls" he's a reminder of the figures we overlook in adorable stories about friendly, quaint towns populated by kind folks like Nathan and Reagan.

In the same way that Nathan and Reagan are besties, the residents of Rutherford Falls and the Minishonka community are neighbors co-existing while not entirely agreeing upon their supposedly shared history.

Still, we're primed to root for this pair despite Nathan's public meltdowns over symbols and legends that most people don't care about. To him ancestry, story and legacy is everything. Reagan feels the same way about her culture, and each passionately supports the other's efforts to preserve and celebrate origins of their Northeastern burg.

While the intersection of those histories is obvious, Nathan promotes primacy of Rutherfords over that of the Minishonka. Reagan seems to accept this, albeit tacitly; if that weren't the case, she'd be more insistent that her people's ancestors be featured more prominently in the Rutherford Falls Heritage Museum, where they're bit players in a "historically accurate" diorama, while a statue of Nathan's ancestor Lawrence Rutherford, also known as Big Larry, sits dead center in town. Specifically, it's parked the middle of a busy street, where cars have plowed into it.

Why not move Big Larry? Because it's just always been there, a local cop explains. Later, when a Native American kid asks why the townsfolk who commissioned Rutherford's statue didn't make one for a Minishonka elder, Nathan weakly says, "Bronze was very expensive at the time, so . . . they really only had a budget for the one."

Helms is listed as a co-creator on "Rutherford Falls" along with Michael Schur and Sierra Teller Ornelas, the latter who previously worked with Schur on "Brooklyn Nine-Nine." That said, people familiar with Schur's catalogue (he's the guy behind "The Good Place" and "Brooklyn Nine-Nine," where Ornelas, a Navajo and Mexican American writer, served as producer) can make a few educated guesses about the structure and tone "Rutherford Falls" adopts.

Schur's sitcoms are episodic plays about the inherent decency of regular folks, and his ensembles are culturally diverse quilts of disparate personalities who treat each other with mutual respect and appreciation of their differences.  Applying that framework to a tale of cultural reckoning on a microcosmic scale, and featuring a culture that is rarely rendered with complete complexity on TV, is a smart flip made distinctly effective because of Ornelas' handiwork.

Her fingerprints are clearly visible — highlighted, certainly, by the work of the five other Native American writers on the show — in the complexity written into all of these characters. Through each of them "Rutherford Falls" mounts a substantial argument about privilege and whitewashed history obviously evinced by Helms' Nathan.

"Parks and Recreation" heroine Leslie Knope makes plenty of mistakes along her journey but there's never any question that her heart is in the right place. Helms' Nathan probably sees himself in the same way, but he loses his cool in very distinct and terrible ways at various points to plant seeds of doubt in the audience's estimation.

But we're also invited to do the same with Schmieding's sunny, capable Reagan, whom the actor naturally realizes as a lovely being who means well but has distanced herself from the community that raised her. In an ordinary feel-good show the writers would take great efforts to make Reagan's virtuousness unassailable. Here it's apparent that her neighbors can't stand her — not because of her aspirations or educational achievement but due to a very solid reason she chooses to sidestep rather than mend.

This also gives Reagan a point of commiseration with her buddy Nathan, whose family has moved on and away from town while he stubbornly refuses to let go. When the mayor (Dana L. Wilson) proposes moving Big Larry, Nathan takes this as an affront to his personal history. He'd rather keep a dangerous hazard right where it is, since moving it disturbs the point around which his precious family's myth is built.

That Helms capitalizes on his own image as a nice, well-meaning white guy to show us how and why being nice and well-meaning isn't a sufficient reason to keep doing the wrong thing only underlines that point.

Set against all of this is Terry, and admirably the writers don't seem keen to ripen him for a clowning in the season finale or grant him the sort of victory for the heroes to overcome in a subsequent season. In fact, Terry receives an entire episode named after him designed to take the audience into a formative moment in his past and to see the world from his perspective.

Doing this not only fills in the blanks of who he is, it reveals Terry as an exemplar of the American bootstrapping myth who learns how the game is played – by being cheated. As a father, he can give his family the big house he didn't get, attend his son's lacrosse games and support his daughter's artistic genius. As a Native American man with power, he's in a position to improve his nation's fortunes, and if doing so comes at the expense of Nathan and the Rutherford story, so be it. At work he's tough and unrelenting. In his off hours he makes an effort to ensure his children feel cared for and respected.

Helms may be the name brand star luring people in to watch this show, but casting him as the willful foil to someone like Terry, thereby bringing more attention to the stellar and deserving Greyeyes, is a masterful move.

"Rutherford Falls" may not be the funniest comedy on TV, but it uses its sweetness to draw us into necessary conversations about how we might better and more honestly Iive together. Instead of wrecking ourselves against our history's ugly parts and pretending that's just the way it is, it posits that confronting the past is a better way forward. Brightly it reminds us that problematic statues aren't the real problem; it's everything propping them up, including our insistence upon being seen as good instead of doing what's right.

All episodes of "Rutherford Falls" will be available to stream Thursday, April 22 on Peacock.