Post-Trump, what are you going to do with all of that freed-up space in your brain?

For five years an Orange Menace camped out in our brains. Now he's gone, what is possible? TV might have answers 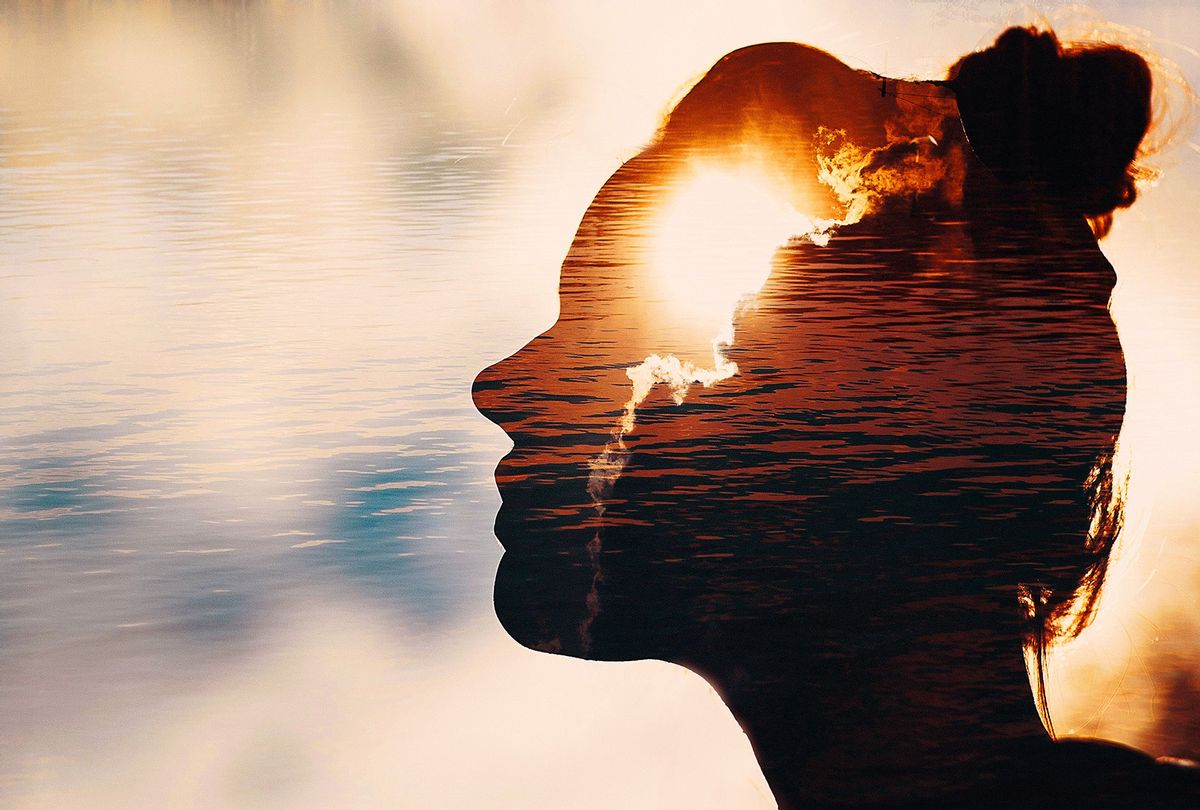 un peeks out from behind the clouds in woman's head. (Getty Images)
--

On Wednesday, Jan. 20, there came a moment around midday, Eastern Standard Time, when people across the globe harmonized through sensation. Millions upon millions, I'm guessing, felt a weight lift from their bodies – a feeling of something suddenly missing that absolutely, positively will not be missed.

Maybe along with that arrived a sharp clarity and a state that first struck some as terrifying, then bewildering . . .until it finally dawned on them that a term existed for that forgotten notion. It's called hope.

This, friends, is a byproduct of a wild, unstable entity vacating your headspace – not a diagnosable condition but a person. Whether we wanted it or not, this person was squatting inside our brains. Now that he's gone, hallelujah, there's room up there. Glorious open square footage.

What are you – what are we – going to do with that empty mind hole?

Take time to think about that. Scratch that, take the weekend off from thinking about anything, since the guy who was living rent free inside your skull did a number on it, stomping on the upstairs floorboards morning, noon and night for five years, stealing your bandwidth.

Even if you weren't on social media since he governed by tweet, he sneaked in to your thoughts by way of words tattooed on dead trees, radio waves, a friend's seething complaint. Predictably, he got worse, doing the equivalent of clogging up the plumbing and stripping the copper from the fixtures and wiring. He's gone now, but the place is a wreck.

We all need a break.

Once we've straightened out the place and taken scrub brushes and scouring powder to the corners, seriously, do come back to that question. What do we put in there? It is absolutely imperative that we come up with individual and collective answers. Recognize this is a multipronged question demanding creative responses on multiple fronts – sociopolitical, spiritual and cultural, for starters.

Television has a way of touching all of these and impacting what we believe and the way we think, and sadly the fact that the previous administration happened at all proves this. Already there are forces vying to break in and take up residence unless we reclaim that spot, change the locks and beef up the security, maybe install some motion lights?

After that we can start making repairs. Although, frankly, few are clear on the tools needed for the job.

From a holistic perspective people have already endeavored to improve themselves with exercise and deep breathing. Netflix has an entire slate of programming devoted to mindfulness, like its recently launched "Headspace Guide to Meditation," or completely tuning out reality via "Moving Art." HBO Max debuted "A World of Calm" before the election for a reason.

All of these provide pathways to feeling better about where we are, and you could certainly pour all the soothing imagery you can fathom into your freshly abandoned mind palace as a palate cleanser.

However, to honestly answer the question of what to do with our mental penthouse requires thinking bravely and creatively not just about where we are, but how to positively stoke the possibility of where we can and should go from here.

Lots of folks are suggesting what not to do again, advising well-meaning thinkers not to waste time digging for concrete data to explain why 74 million people voted for the hooligan who spent four years steadily beating reason and science to death and killing 400,000 Americans in the process. They don't want to acknowledge that the answer is obvious and ugly, and therefore very hard to solve and defeat in one or two swipes.

We can be aware that in this moment, every one is asking some version of "What now?" Studios and networks are staring down a lot of empty road on the TV schedule over the next few months due to the pandemic shutting down productions. Partisanship has divided the American electorate, but it has nothing on what the streaming wars have done to fragment the nation's TV viewers. There is no single show that gathers us on common ground lit by a single glow anymore.

Even in this there is reason for optimism and a clue about which direction to head in. "This Is Us" is still one of the most popular series among Democrats and Republicans, and has consistently enjoyed a bipartisan audience since it's been on the air.

CBS comedies "The Neighborhood" and "Bob Hearts Abishola," shows that specifically deal with interactions between Black people and white people, are holding their audiences. Again, these don't prove that white supremacy isn't poisoning America; indeed, some of the very people who love these shows likely point to them as a proof that racism doesn't exist.

But the fact that people are watching them also means they're being exposed to people who don't look like them, welcoming them into their home and connecting to their stories.

And creators, if you're wondering how to refresh your mental interior design, perhaps you can begin by thinking of new ways to speak to people's biases against multiculturalism and their implicit role in propping up a society designed to degrade and exclude people who don't look like them.

One heartening development is the number of shows by and about Native Americans coming to TV. Ava Duvernay is developing "Sovereign" for NBC, a drama about an indigenous family co-produced by Sydney Freeland and Bird Runningwater.

"The Good Place" creator Mike Schur is bringing "Rutherford Falls" to NBC with co-creator and showrunner Sierra Teller Ornelas, starring Ed Helms as the mayor of an upstate New York town that borders a Native American reservation. FX has ordered the half-hour comedy series "Reservation Dogs" from Sterlin Harjo and Taika Waititi; it's about four Native teenagers in rural Oklahoma who fight crime and commit it.

We should pull for these shows to succeed, because if they do that gives them the power to speak to a populace that hasn't listened to Indigenous people, let alone seen or meaningfully interacted with them. When they knock, let them in.

Meanwhile in 2020 we lost "One Day at a Time" and barely got to know the reboot of "Party of Five," two shows that resurrected classic formats with Latino families at the heart of them. The cancellation of "One Day at a Time" really smarts, though, because it was incredibly good at making us care about the Alvarez family for many reasons beyond the challenges they face, a secret all great series masterfully put into practice. It was all over our hearts and minds, that one.

(The good news is that Gloria Calderon Kellett, the forward-thinking creator of "ODAAT," now has an overall deal Amazon.)

We also lost "Fresh Off the Boat," and gaining "House of Ho" and "Bling Empire" doesn't exactly bring balance in the realm of representation unless TV wants to leave the impression that all Asian folks are crazy rich . . . or space travelers, as John Cho will be in "Cowboy Bebop." Then again, we were also blessed with Mindy Kaling's "Never Have I Ever," so there's that.

All these shows that are, were, or will be on TV play a vital part in deciding what will occupy our mind space and shaping how we view the world as it is and better, as it can be. The boldest of them will coax us into places we haven't gone and steer us through conversations that can be new to us and therefore uncomfortable. Those dialogues can address what divides us, but they can also foster better understanding about how we got to where we are how to go through it.

In his post-inauguration monologue, "Late Show" host Stephen Colbert reveled in the relief that rolled across the nation last Wednesday and in his own way addressed the very question we've posed here.

"How do you repair the past?" he asked. "Have we tried unplugging it and plugging it back in? Because that works with almost everything else."

Rebooting is impossible. Repairing and redesigning, that we can do. For now, though, it's fine to know our mind space is ours again and blissful sit with that. The keys to our attention have been returned. Please, let's not lose them again.