"I was scared the entire time": "Sasquatch" director on investigating a Big Foot murder mystery

"When you start digging into folklore, you're going to find ... the darkest aspects of humanity" 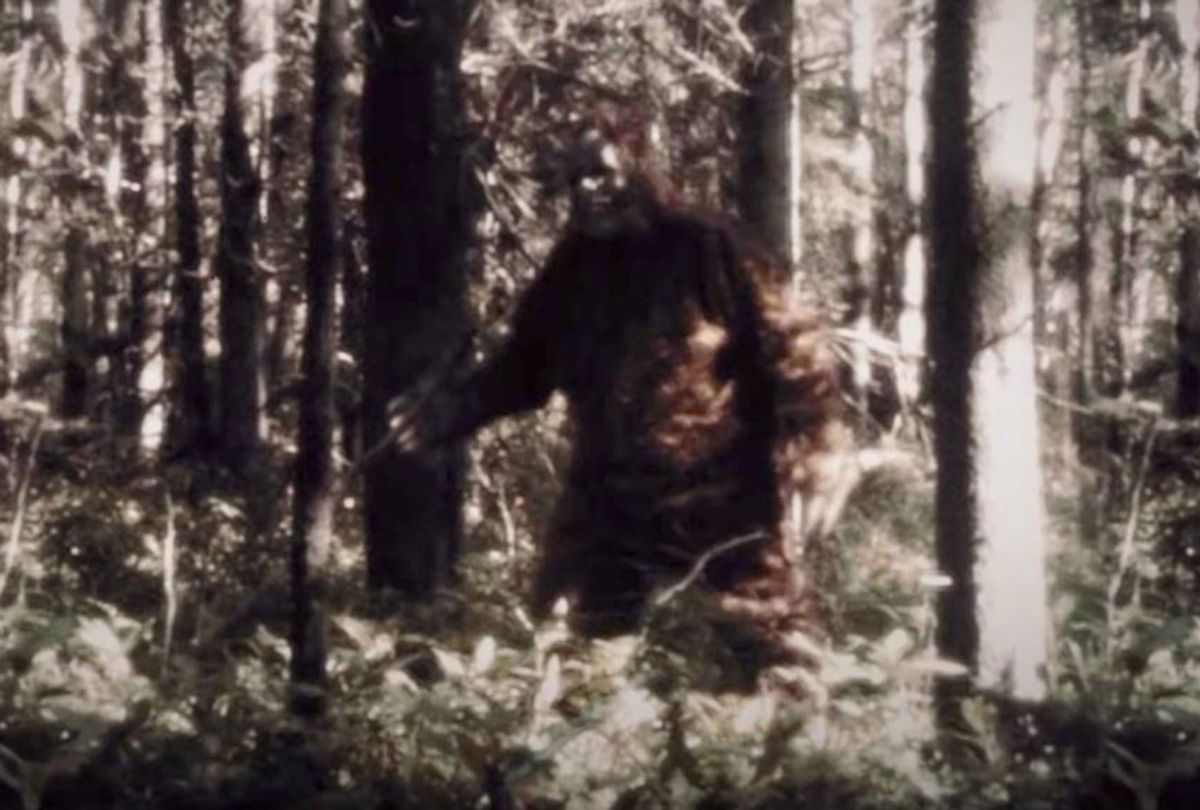 In October 1993, three California weed farm workers were viciously murdered by Bigfoot. At least, that's the story that David Holthouse, who was visiting a friend who worked on the farm, remembers hearing as the men who discovered the bodies frantically explained the situation to the head grower.

Holthouse went on to become an investigative journalist largely because, as he mentions in the Duplass Bros.-produced Hulu docuseries "Sasquatch," there's just something about his vibe that criminals trust. They open up to him in ways that they wouldn't typically to other reporters. Holthouse went on to write pieces about infiltrating neo-Nazi skinhead groups and spending "a week on the streets with gutter punks."

He forgot about that night in California until he got a text from Joshua Rofé, a documentary director with whom he was working on the 2019 docuseries "Lorena."

Rofé remembers typing out: "This is the craziest text I'm going to send you for the next five years. I'd like to find a murder mystery that is somehow wrapped up in the Sasquatch story and, if it exists, pursue it as the next project."

That's how Rofé ended up working on the three-part "Sasquatch," which premiered on 4/20 and uses Holthouse as a lens through which to investigate what actually happened that night on the farm and why a brutal triple homicide remained unsolved 27 years later. Their search for answers leads them back to California's Emerald Triangle where some people are eager for them to stop asking questions.

Rofé spoke with Salon about what preceded that text he sent, getting inspiration from '70s paranoid thrillers and why he was scared for Holthouse's safety every single day they were shooting.

I think, increasingly, we're seeing documentaries — and some very good ones — that illuminate stories people think they already know, right? Like the Fyre Festival or WeWork documentaries. What was so fascinating to me about this story, however, is that it is unlike anything I have ever heard. How did you come upon it?

So, I came upon this story while I was making "Lorena," my previous series, which had all this incredible archival material and I did start to have this thought, "Oh, for my next project, what if I found a story you couldn't even Google?" I thought it could be an interesting challenge and I just sort of filed it away with nothing attached to it.

Then in February 2018, I was having dinner with my friend, Zach Cregger — he's one of the executive producers on this — and his parting words were, "Hey, I think you should listen to this podcast I love called 'Sasquatch Chronicles.' You're either going to love it or think I'm crazy for loving it. It's about people calling up with their encounter stories."

And I thought he was crazy, but he said to just listen to one episode. Cut to four days later and I'd listened to 11. I was just completely taken by the visceral fear that I was [feeling] in all these stories. It didn't matter whether I believed in Bigfoot or not, the fear was so authentic. I was so struck by it and I just did this thing in my head where I was like, "Am I going to make a Sasquatch something?"

By the end of the week, I thought that if I could find a murder mystery somehow wrapped up in a Sasquatch story that could be incredible — I could probably find a story that would really be able to capture that visceral fear that I was hearing from folks.

Before jumping into filming, did you watch any television series like "Finding Bigfoot" or "Expedition Bigfoot"?

No, I'm not really interested in that stuff. What I was watching, actually — and this might sound strange — was "McCabe & Mrs. Miller," and the reason for that was just the way Altman captured the vastness of nature and the Pacific Northwest landscape. I was watching Fincher's "Zodiac," which is one of my favorite movies of all time because there's that pursuit of a puzzle. Things like "Memories of a Murder," Bong Joon-ho's movies, "The Parallax View."

You know, in many ways I think of this as a '70s paranoid thriller. I've just named some of my favorite films of all time, but those were the sort of mood pieces and stories that I wanted to work from.

On one hand, in this story, you are dealing with people who are seemingly eager to talk about this, you know, potentially mythical creature — and then on the other, you've got individuals involved in the cannabis underworld who weren't as eager to be on camera, especially to talk about an unsolved triple homicide. How did you navigate that disparity to make sure the whole story was told?

It was through working very closely with David and working very closely with my editors — Allan Duso, Morgan Hanner, Azin Samari. They're as important as anybody who worked on this, if not more important than literally everybody who worked on this, David aside. They were constantly assessing – What are all the pieces? How do we balance all the pieces? It was a constant process to wade through those waters, while David was just discovering things in real time.

Like you said, people from "the Sasquatch world" were very eager to talk. People from the criminal underworld were definitely not. I think all the credit for getting those people to speak is David, even people who were really elusive. He could spend eight months or a year developing a single source. He has a very specific skill set that he sort of alludes to in the second episode, where he says people from the criminal world are just so comfortable with him.

In David's words, he "reads as crooked to them as they do to him." Even though David is very, very much not crooked. There's something — a deeply entrenched poker face — about his aura. And I think it makes certain people comfortable enough to speak, especially if they know something wild and it has been burning inside of them long enough.

So, David spoke in this documentary really eloquently about how his past experiences with trauma perhaps set him up for engaging in potentially riskier behavior to get a story. He recounted how, in his career as an investigative journalist, he's infiltrated neo-Nazi skinhead groups, for instance. Did you fear for his safety at all while making this documentary?

I was scared the entire time. I was in fear for his safety the entire time we were making this. I hated the shooting of this. I couldn't wait for filming to be finished. And the truth is, we never knew when filming was going to finish because we just kept chasing the story to get that thing  — you're not even sure what it is.

I'll tell you a story about this one night in particular. David was supposed to meet a source at 3 p.m. in a public place and the location kept getting changed until the meeting was pushed to about 11 p.m. Then David showed up to the location, which was this bar, and it was actually closed. But when he got there, there were about eight other people there who he did not know were going to be there.

He then is essentially being pressured to get into a car to be driven three hours away in the middle of the night to a person who supposedly has a key piece of information. Throughout the evening, he is shooting texts whenever he could from the bathroom, just to let me know what is going on.

Basically he said, "If I'm not out by this time, things have taken a turn for the worse." I'm up there in Northern California, back at the hotel, just wide awake until three in the morning to tell me he's gotten out. That text finally came, and I will say that was not an isolated incident. I feel like David's experience making this was full of different versions of this. It was really, really scary, for sure.

I think that despite some of the really dark subject matter here, "Sasquatch" could have veered a little cheesy if you'd done traditional re-enactments. The animation you all use to tell the story of the crime is stellar, though. Could you talk some about it?

The animation is done by Drew Christie. We had been discussing early on how we were going to visually represent this large portion of the story from that time in '93 when David was up there on the farm. Outside of maybe one or two photos that are in there, there's just nothing that exists in terms of archival.

And Mark Duplass said, "Have you thought about animation?" The truth is, I've never really loved animation in docs; it's not something that ever connected with me. What's funny is Mark even told me subsequently that he actually felt the same way, but for some reason he had this gut feeling that there's something there.

I'd been kind of thinking of this story, in many ways, as like a graphic novel come to life, so Mark said, "Why don't you talk with this great animator we've worked with before, Drew Christie? He lives in the Pacific Northwest."

I had a conversation with Drew and we were going to send him a two-minute clip of David telling the story from the cabin and the only thing I told him was to think of it as a graphic novel come to life. About two weeks later, Drew sent back 90 seconds of animation to go along with David's story and I don't think even a frame of it changed in the finished series. He created the animated world you see and he 1000% gets the credit for that. He's brilliant.

What did you learn from making this series?

I learned that when you start digging into folklore, whatever sort of fun quirkiness that was inherently a part of it at the start, when you start digging in, that will melt away pretty quickly. You're going to find some of the darkest aspects of humanity. Folklore, at its face, can be used as escapism, then you realize, "Oh, this is a metaphor for the darkest s**t that we don't want to face. This is how fear is wielded in the name of control." Those are the themes that rose to the top as we went along filming for sure.

"Sasquatch" is now streaming on Hulu.