The U.S. never had a shot at herd immunity 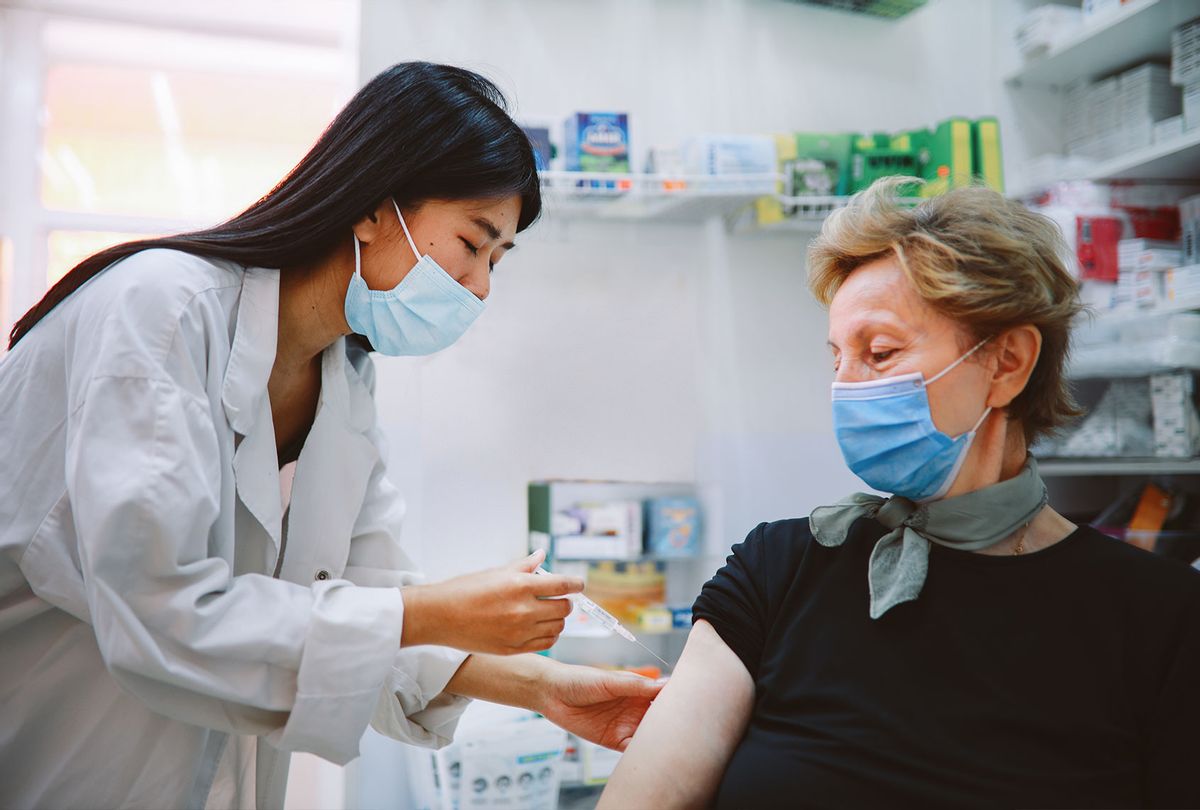 Herd immunity just ain't happening, folks. Once anti-vaccine rhetoric became normal on the right, the goal of herd immunity to stop the spread of COVID-19 was doomed.

Many folks have been saying it for a few months now, but it appears that the slower-moving medical experts in the federal government are finally admitting it. Despite half of Americans getting the shot, Apoorva Mandavilli of the New York Times writes, "vaccination rates are slipping, and there is widespread consensus among scientists and public health experts that the herd immunity threshold is not attainable — at least not in the foreseeable future, and perhaps not ever."

This article caused a lot of doom-saying from pandemic addicts on social media, but there's actually good news in this. Dr. Anthony Fauci, Biden's top advisor on the pandemic, explained that federal leaders "stopped using herd immunity in the classic sense," and instead the focus has shifted to "vaccinate enough people, the infections are going to go down." In other words, it's time to stop letting anti-vaccination people hold the rest of hostage, wind down the lockdowns, and shift gears to managing COVID-19 through other strategies.

As Mandavilli explains, there's a lot of reasons that herd immunity is simply unachievable in the current situation, but there is no doubt that "[s]kepticism about the vaccines among many Americans" is playing a major role. She delicately avoids digging in deeper, but anyone who has been paying attention in recent months understands what this means: It's Republicans.

The last big poll released on this question was by Monmouth University in mid-April and the news was not good: Nearly half of Republican voters flat-out refuse to get the vaccine. That number has been steadily climbing, in response to a heavy push from Fox News to demonize the vaccine and the spread of anti-vaccination conspiracy theories on social media.

To be clear, "because Fox News said so" isn't actually enough to convince Republican voters to forgo a free, easy shot that can literally save your life. The anti-vaccination propaganda is only working because it builds on decades of right-wing propaganda that has poisoned the minds of millions of people. Nowadays, conservatives and even people who are more conservative-adjacent see hostility to scientific expertise as a virtue and reject the very idea that there is any such thing as the common good.

There is such thing as a healthy skepticism of the experts, of course. Throughout the pandemic, for instance, many prominent academics, public health experts, and journalists have been critical of many decisions made by the Centers for Disease Control and other health officials, asking hard questions rooted in a strong understanding of science and public health care policy. But what right-wing propaganda has instilled in followers is not really skepticism, so much as a reflexive suspicion of scientific experts.

Climate change denialism, which is widespread among Republicans, is the most obvious example. While the numbers are thankfully shrinking, for decades now, Republican voters largely bought into the ludicrous conspiracy theory that climate change was a hoax perpetrated by academics who had ulterior motives, usually of the "Marxist" variety. But the idea that a random GOP voter with a big ego knows more than the experts has become pervasive. It's why conservatives stubbornly stick by discredited ideas like creationism or "abstinence-only education," even though the overwhelming scientific evidence shows it's all poppycock.

These attitudes have leaked out beyond just the hardcore right. Now, large portions of the public that may not think of themselves as right-wingers nonetheless have adopted the idea that they, armed with a Google search engine and unearned confidence in their own opinions, know better than the experts.

Witness, for instance, the recent kerfuffle over the bafflingly popular podcast host Joe Rogan, who recently went on a rant about how "a healthy person" who is "exercising all the time" and is "young and you're eating well" shouldn't bother to get the vaccine because the risk of dying of COVID-19 is low.

On its face, this was a dumb thing to say, because getting sick sucks, no matter how healthy you are generally. But when Rogan got criticized, including by Dr. Fauci, he responded in a way that was widely reported as a "backtracking." The reality, however, is more complicated. Rogan did not actually back down from his false belief that vaccines don't benefit healthy people. (Which they do, by keeping them from getting COVID-19.) He simply said that the "argument was you need it for other people" and "that's a different argument."

Rogan's clearly sticking by his premise, that getting the vaccine is inherently a sacrifice for "healthy" people. It's likely that a lot of his audience still imagines they belong to the category "healthy people" and that there is, for them, some conflict between what's good for them and what's good for the larger community. In reality, getting the shot is both good for individuals and communities, because again, getting sick sucks, no matter who you are. Rogan's poor logic here, however, is persuasive to a lot of people because decades of right-wing propaganda has instilled this notion in millions that everything is a zero-sum game, and anything an individual does that is good for the community must inherently come at some personal price.

This false logic, for instance, is pervasive in the debate over health care generally.

Universal health care systems in other countries have demonstrated, time and again, that individuals have a lot to gain, in terms of lowered health care costs and accessibility, from systems built around the assumption of a common good. But Republicans talk about health care in these zero-sum terms, scaring their voters into believing that more people in the system just means less health care for them. In reality, universal systems have more people paying in, streamline bureaucracies, and lower overall costs — often making it easier for any individual to get health care.

Over the weekend, the New York Times ran another piece, about how the conservative, white communities of Appalachia have become bastions of anti-vaccine sentiment. Folks deny that it's out of a tribalist loyalty to Donald Trump, even though he leaned hard into COVID-19 denialism. But even if it's not that, it is because they're largely Republican, and are plugged into long-standing right-wing tendencies to reject science and look dimly on anything perceived as the common good. Indeed, the messaging coming from government officials about the vaccine is backfiring precisely because it emphasizes community spirit and science. Instead, the folks who the Times spoke to highlighted how "me and my family can take care of ourselves."

The phrase "herd immunity" brings with it the concept that we are a herd. For right-wing America, however, accepting the idea that they share anything with the rest of the country — the racially diverse, progressive majority — is an anathema. They don't want to see themselves as part of a herd that has those other people in it, even if that means rejecting the basic facts of human biology. So of course they were easy to bamboozle with anti-vaccination rhetoric. And now it's just up to the rest of us to figure out how to deal with that.