From crispy potato tacos served with a mountain of queso Cotija to the perfect margarita, we've got you covered 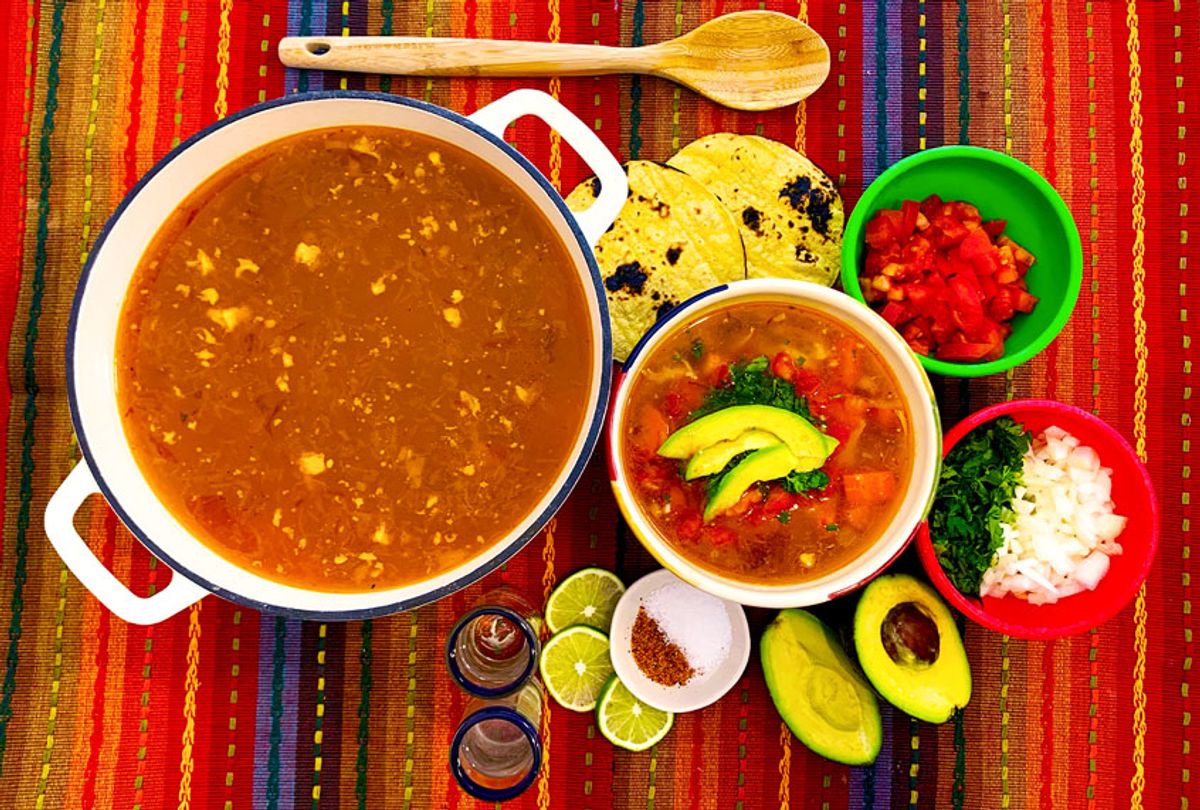 Cinco de Mayo is a traditional Mexican holiday that commemorates the Mexican army's victory over France at the Battle of Puebla in 1862. Over time and through immigration, the celebration spread to the U.S. — in fact, it's actually more celebrated stateside these days — and its meaning was eventually diluted into an excuse to don sombreros and drink tequila with some passing (inaccurate) reference to "Mexican Independence Day."

That said, there are numerous respectful ways to commemorate the holiday, which in America has largely become a celebration of Mexican and Mexican-American culture through food. Read up on the traditional food of Puebla; consider donating to organizations that offer legal aid to undocumented restaurant workers; and support Mexican-owned grocery stores to buy ingredients for your dishes at home.

If you're looking for some inspiration for dishes and drinks to make at home, Salon Food has you covered. From caldo tlalpeño — a hearty and spicy chicken and chickpea soup — to crunchy tacos de papa served with crisp lettuce and a mountain of queso Cotija, here's what's on our menu:

1. Warm up with a bowl of spicy caldo tlalpeño

When you think of Mexican soups, black bean and tortilla soups likely come to mind, but they barely scratch the surface. As Salon's Joseph Neese wrote, his abuela Elena — who immigrated to the U.S. from Mérida, the capital city of the Mexican state of Yucatán — made caldo tlalpeño for him as a child.

"The hearty flavor of this chicken and vegetable dish is achieved by slow-cooking chickpeas and chipotle peppers in chicken stock," Neese said. "The creamy and nutty taste of the chickpeas perfectly cuts the spicy and smoky flavor of the chipotle chiles, and the result is one truly bold flavor pairing."

The soup is cheap and easy to make for a weeknight dinner, and it is almost infinitely riffable. You can swap in squash or zucchini for the carrots or substitute vegetable broth if you want to make a vegetarian or vegan version. Don't have queso fresco or Oaxacan cheese? Mozzarella works just fine, too.

The only non-negotiable (in my mind, at least) is Neese's recommendation that you serve this hot soup with an ice-cold Mexican beer.

The "countdown margarita" — three parts tequila, two parts orange liqueur and one part fresh lime juice — is a foolproof go-to for many bartenders. But as Salon's Erin Keane wrote in her latest Oracle Pour column, she recently fell in love with a different formula.

"Today, I'm a believer in the 4-3-2 margarita: same essential ingredients, with the ratio tweaked to allow more bright lime to shine through what I now feel is the right balance of tequila and sweet orange for me," Keane said.

To add a kiss of spice, Kean also recommends upgraded from a basic salt-rimmed glass to Tajín Clásico seasoning.

3. Or ditch the glass with these key lime pie-inspired margarita bars

"We're all winding back the clock right now to those desserts we grew up as we search for comfort," Buttercream Blondie pastry chef Meghan McGarry told Salon Food. "I grew up making key lime pie, but now I'm an adult, and I've remixed this classic dessert as an edible margarita."

These bars are a light and lush mix between a cheesecake and a key lime pie. A golden graham cracker crust anchors the airy filling, which also includes orange liquor — just like you'd expect to find in a margarita. It's garnished with fresh whipped cream and zest of both lime and orange for an added punch of color and flavor.

4. Serve these crunchy potato tacos from Esteban Castillo with a big pile of lettuce and queso Cotija

Esteban Castillo, the author of the best-selling cookbook "Chicano Eats: Recipes From My Mexican-American Kitchen," said one of the things he missed most about visiting Mexico was his Mama Nina's cooking.

"She used to sell raspados (a shaved-ice treat made with fresh fruit syrups) and sopes on the weekends to help make ends meet," Castillo wrote. "It took more than ten years to get back to Mexico, and during that first visit back, I noticed things hadn't changed: She still opens up her house on the weekends to anyone who's hungry, serving pozole, sopitos, and the crunchiest tacos de papa I've ever had, served with a big pile of lettuce and queso Cotija."

Those crispy, crunchy potato tacos — which are drizzled with a flavorful tomato and tomatillo sauce — are perfect for a small crowd. Castillo's recipe yields a dozen, and they're vegan-friendly, too.

If you're interested in learning more about Castillo's approach to Chicano food, check out his interview with Salon's Neese.

5. Raid your pantry to make some skillet migas

As I wrote last year, migas are a traditional Mexican — and now Tex-Mex — breakfast dish made by griddling tortilla strips in a skillet until crisp, which are then topped with a mixture of whipped eggs and scrambled. In this version, you can definitely use fresh tortillas if you have them, but (speaking from hangover experience) corn chips work just fine in a pinch.

It's both the ideal "clean out your pantry" dish and the perfect breakfast for dinner dish. If you want to give your at-home version a little something extra, add some chopped avocado and pan-fried chorizo.

6. Make Mac and Queso Fundido, studded with mushrooms and chorizo

Speaking of chorizo, here's another recipe from Esteban Castillo's "Chicano Eats: Recipes From My Mexican-American Kitchen." This dish is what would happen if macaroni and cheese and queso fundido had a (very beautiful) baby. The cheese sauce — which is made with sharp Colby Jack, mozzarella and parmesean cheeses — is infused with garlic, onion and paprika. The pasta is then layered with spicy chorizo and savory mushrooms.