In dark comedy "The Columnist," a reporter finds that dealing with online trolls is literal murder

"Clearly she's a psychopath," says Katja Herbers about her "The Columnist" character's solution to online trolling 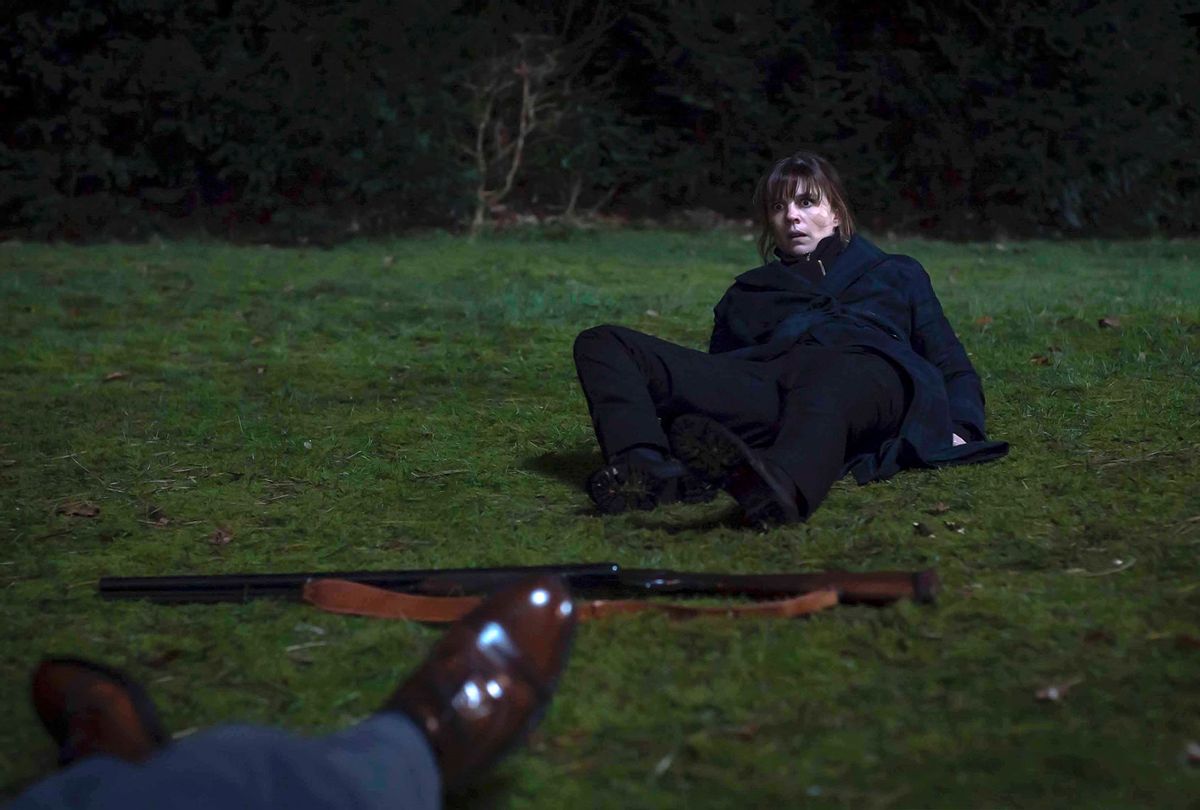 Katja Herbers ("Westworld," "Evil") gets a plum part as Femke Boot, the title role in the gleefully nasty revenge comedy-thriller, "The Columnist." Boot is an author who works for a Dutch newspaper where her articles get considerable attention — just not the kind she wants. Called all kinds of vulgar names, and even prompting death threats, Femke has had it with being trolled. She soon takes matters into her own hands, hunting down her bullies, and, well, killing them. Meanwhile, Femke's daughter Anna (Claire Porro), is speaking out about free speech at school hanging banners that read, "You can't say 'F*ck the King,'" to troll the conservative headmaster who repeatedly tries to curtail her efforts to express things he feels are inappropriate.

Meanwhile, Femke's new boyfriend, Steven Dood (Bram van der Kelen) who sports a dark, gothic look with eyeliner and nail polish, is a sweet guy who cooks and cares for her and becomes insecure that she is cheating on him when she goes out on mysterious nightly excursions.

Herbers is in almost every scene in "The Columnist" and she is charming as the meek writer who can't seem to get her book started . . . until she becomes empowered by killing. She shifts from advocating being nice about having a difference of opinion to actively silencing her detractors. It is amusing to watch her dispatch a rude neighbor, or a man who called Femke something he would never say to or about his girlfriend. She even offs a guy who wrote something horrible about her to "fit in."

Salon spoke with Herbers about social media, "The Columnist" and her killer performance.

I see you tweeted, "I love how pissed off people are about our absurd horror comedy addressing misogyny & online harassment." And, "Didn't expect our Dutch movie 'De Kuthoer' which we gave the less offensive title 'The ColUmNisT' to trigger the fake news qanon nazis like this." What are your thoughts on social media? Is it a necessary evil?

I think we can't really go back. I would, if we could. There are good things about it too — during this pandemic, we've been able to stay connected. But there is a very dark side to it as well. I like writing a letter and making normal phone calls. But I don't think we can go back.

I also saw someone tweeted a complaint about your acting on the show "Evil." Do you pay any attention to such negativity?

I haven't read that tweet. Unlike the character in the film, I don't really engage. I'll read a New Yorker review by Emily Nussbaum who loves the show, or other people's whose opinions I value. But I'm not going to read any one comment from anybody. I don't think that's a healthy way to be. I also don't care enough about what one person might not like about something. There's always something someone's not going to like.

I like "The Columnist" for that reason. Femke is unable to deal with it. She goes to police, and they say, "Maybe just don't read it." She gets the flip phone and cuts the Wifi cords, and gets sucked back into it. I like that she's such a hypocrite. She's helping her daughter with a free speech assignment at school and she thinks that's hugely important. But she murders people who say horrible things about her. I do understand the level of disparity, because no one is helping her.

It's a satire. It's a dark fairy tale. It is in no way real. Which is interesting that people get terribly upset about it. In no way does my character have the moral high ground. You judge her as much as you cheer her on. Clearly, she's a psychopath. It's a think piece, and as much cathartic to watch as it is troubling. Clearly the film is not saying this behavior is good. It's taking that to the extreme. These people [Femke kills] don't have a face, they just have these terrible words, and when she confronts them, they are lonely weird dudes. One guy offers Femke some food. He's like, "Oh, you read that. I was proud of the way I put that." I think it's a timely piece, and fun film. I was really surprised by the response that one website tweeted out the poster and a link to the trailer and people went crazy. Just really crazy. We have to kill all journalists before this can happen. [Laughs] The way they responded is kind of an incredible promotion for the film — because that's exactly what it talks about.

The film champions freedom of speech but silences dissenters. It speaks out of both sides of its mouth. How do you process the character being so hypocritical?

I like those flawed characters who have a contradiction within themselves and are very strongly one thing while clearly doing another thing. They are fun psychological things for me to play around with. I saw her as someone who, at the beginning of the film, was at her wit's end, and I enjoyed that I was allowed to take it to a comedic place but also keep serious. You understand why she's doing it, but you see someone completely derailing into a psychosis. I don't know if that kind of behavior I am portraying exists, but it doesn't matter as you can go along for the ride. I don't know that you can be that psychopathic and that kind of a cold-blooded murderer while having that cute home life. I didn't model it after anyone, but from reading the script, it immediately clicked.

I like that "The Columnist" talks about not just creating a brand, but about creating a stir. What are your thoughts on "click bait" and sensationalist journalism?

Did you see the documentary, "The Social Experiment?" It's incredible. It made me understand a lot about social media. It was designed like slot machines — it has something built into it that makes us just want to keep on scrolling. I definitely spend too much time on my phone. I don't do click bait but I do scroll. Sometimes a half hour is gone. I think there are very smart people behind our technology and we're like the guinea pigs and reprogramming our brains by looking at screens and falling for cleverly-designed ways of keeping our attention there. I've noticed I recently got a cat, and someone is listening, because without Googling cats, I'm seeing a lot about cats.

One of Femke's female friends says she likes her "female"-focused columns, which narrows her point of view. Do you feel that it is harder for women to be taken seriously?

Men don't want to listen to women — and this is a huge generalization because, obviously, a lot of men are good people — but we've seen it in last election. People don't want to hear Elizabeth Warren be very smart. It's interesting that Femke's female friend says that. That it's not a man telling her to write about female stuff. I will say, I think my character is a mediocre writer. I never imaged her to be that good. I think that's more fun for the story. She has left opinions, like the horrible, horrible tradition in Holland, Black Pete, that no one realized was that horrible until CNN did a piece about it. We're no longer doing it, thank heavens, but it is our version of Santa Claus, and Black Pete hands out presents to the kids. And Femke writes against this and those people say crazy things. In Holland, Black Pete is much cooler than Santa Claus, and everyone wants to be Black Pete, but it's white people in blackface. There are a bunch of [racists] in the countryside who will defend Black Pete up to getting violent about it because they don't want to feel racist, but they are.

Murder inspires her and cures her writer's block. She shifts from wanting to be nice about having different opinions to killing her trolls. How do you justify her action?

There's no justification. At all. If we were to justify someone who is killing a bunch of people, I don't think that would be a good film. That's what makes the film fun. Clearly, she is a psychopath, and she should go to jail. She is in no way good. But you do cheer her on, because everyone knows what it's like to be trolled online and how that can feel. It's a fantasy and a satire. The [trolls] are saying real threats. I've had some of that happen to me, and it's not a good feeling. I can see how you can get scared. But lots of those things [in the film] are not real threats. It's just written there. I don't know that these people would act on it, which may be why Femke goes to the police. It's hard not to look at that. Her whole moral belief system is based on let's disagree, but still be nice. Clearly that's not what she's doing. [Laughs]

What can you say about filming the murder scenes in "The Columnist"? Was it fun to get revenge on men, however vicariously?

It's the same as with sex scenes that are never romantic. It's all very technical. We did stunt training to know how not to hurt someone. I didn't have a stand in. The choreographies are fun.

The murders in the film are creative. Given how people always say, "I could murder them!," how might you want to murder someone?

I don't want to murder anyone. Not in a million years. I have no such desire. It's a figure of speech. Like when people say, "This is the best dinner I've ever had." That's very American to me. If a Dutch person said that, you would stop, and pause, and ask, "Is it?" Americans have a sweet way of completing someone and taking it to an extreme. I had to get used to that. Like when people say, "This is the best time they've ever had." How sad has their life been?

"The Columnist" is available in virtual cinemas, on digital and on demand on Friday, May 7.