MyPillow CEO draws half-full house at the Corn Palace, vows Trump will be back, gets stuck with his own books 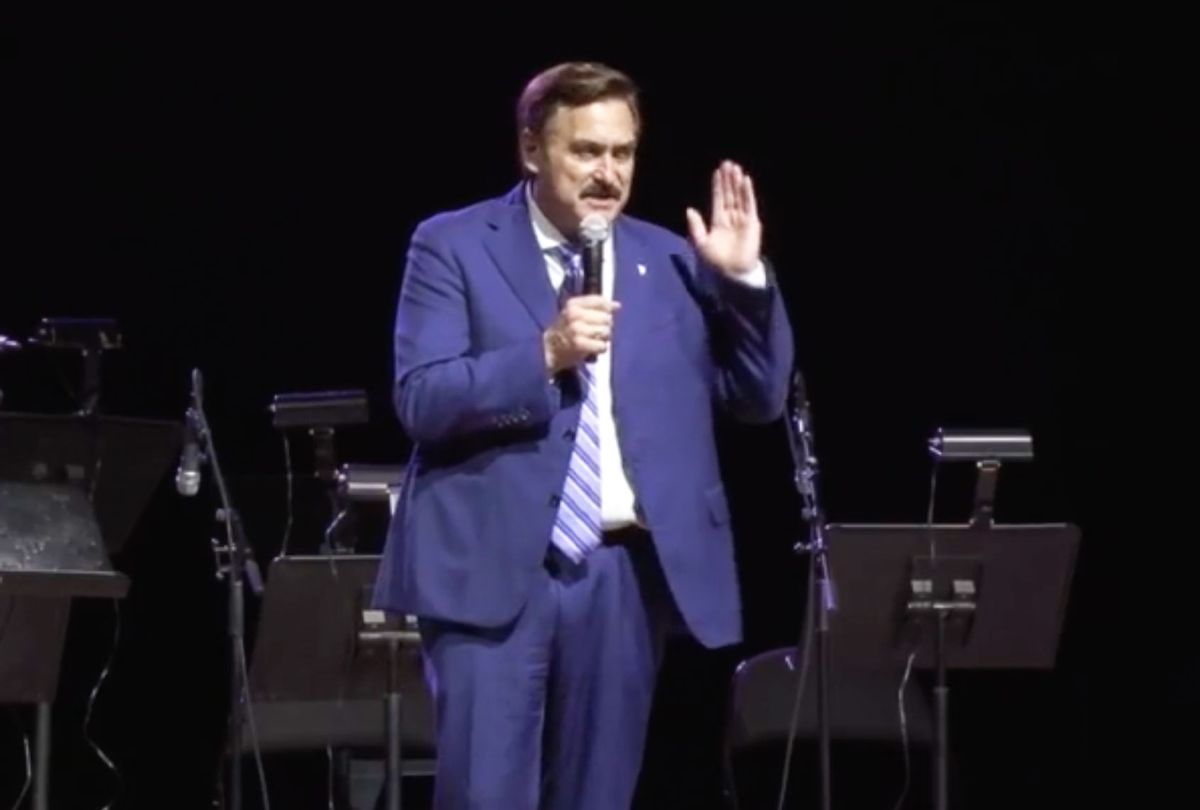 Mike Lindell speaks at Frank Speech rally on May 10, 2021. (Right Side Broadcasting Network)
--

MyPillow CEO Mike Lindell held his much-anticipated-by-fans "Frank Speech" rally Monday night at the Corn Palace in Mitchell, South Dakota, where there was no shortage of baseless claims about the 2020 election. The event was billed as providing a venue for Lindell to relaunch his failed social media platform Frank, but no announcement about the platform occurred.

Before the event began, a long line of people waiting to get into the venue wrapped around the outside of the building. But once they got inside, the situation was less impressive. Only around 1,500 people tuned out for the event, which Lindell had initially boasted might draw a crowd of 30,000 supporters. (In fact, the Corn Palace's seating capacity is just 3,200.) Even so, Business Insider's Grace Dean noted that some attendees waited in line for seven hours before the doors opened.

According to my best estimate, there are at most 1,500 people in attendance at Mike Lindell's "Frank" rally. Many empty seats in the venue that holds 3,200. It seems like Lindell is also short of the 30K people he boasted would show up too! pic.twitter.com/qXLD3ZNY1y

At one point, Piscopo's microphone stopped working, most likely a standard technical error of the sort that bedevils performers at all levels of the entertainment ecosystem. The once-popular late-night comedian chose to blame the malfunction on Chinese interference. "We're not racist," Piscopo declared, apropos of nothing. "I travel around the country, and we're a good country. They are criticizing us every which way, and tonight it stops." While working the crowd, Piscopo spotted a fellow MAGA-friendly celebrity — a cast member of the show "Duck Dynasty."

"My guess is half the crowd was 60 or older," one attendee of the South Dakota rally told Salon on Monday night. "A lot of people yelled 'No!' when Piscopo asked if anyone got vaxxed, and the audience made the most noise when Lindell predicted Trump will be back in office [i.e., back in the White House as president of the United States] by August. They were very happy about that possibility."

Then the crowd heard a bit (virtually) from Donald Trump's former HUD Secretary Ben Carson, who offered cookie-cutter conservative remarks that appeared to have little effect on the audience. "We recognize that our rights and our liberty comes from God, not from government. And that makes us very unique," Carson said, while also offering Lindell high praise.

Ben Carson is remoting into the event and is appearing on the big screen at the front of the auditorium. Carson says liberty isn't valued among the left anymore.But no matter what, rights come from god, not government, he said. Still, government has replaced god for many, he said pic.twitter.com/JOKXYVyUVU

Far-right radio host Eric Metaxas also spoke before Lindell, offering a hodgepodge of jokes that appeared to miss the mark with the crowd and attempting to stir up outrage about the alleged persecution of religious believers around the world. "People are being persecuted around the world because their governments don't believe in God," Metaxas stated. "When you push God out, freedoms go away. It's what we're seeing right now — it's why we're starting Frank Speech!"

Mataxas closes his talk by leading the crowd in a song verse pic.twitter.com/WtMyFTTZF2

With attendees reportedly on edge over the supposed threat that antifa might sabotage the event, Lindell, the evening's Elvis equivalent, took to the stage, where he shared his life story but neglected to say anything about a relaunch of Frank, the supposed purpose of the event to begin with.

Lindell spoke for around 90 minutes, sprinkling in random tangents meant to support his baseless claims of 2020 "voter fraud" and allegations that China was somehow to blame. The pillow magnate once again suggested that once the truth is known, the Supreme Court will unanimously vote to void the election results and reinstall Trump as president. (No legal or constitutional mechanism exists that could accomplish that result.)

"They will have to protect our country, and it's going to be a 9-0 vote to pull the election down," Lindell vowed at one point, while not discussing the non-relaunch of Frank, perhaps because it was poorly constructed using the wrong software and is never likely to work.

Before the rally, in an interview with a local right-wing talk show, Lindell said he had recently spoken to Trump, who conveyed how "proud" he is of the work Lindell is doing.

As for other notable moments, both the self-explanatory organization "Bikers for Trump" and members of the far-right Proud Boys were in attendance. An attendee told Salon that a group of six Proud Boys "walked in and sat in the middle of the crowd, near the front." Another attendee could also be seen in one photo wearing an anti-government "Three Percenters" patch.

It appears there are #ProudBoys in the crowd #FrankRally pic.twitter.com/Vbwev0Y46s

Salon also learned about an investment opportunity being pushed during the rally, which "optimistically (yet reasonably)" promised a 3,500% return. Seemingly too good to be true! The custom-made flyers touted, "We are living in a time of war against the deep state, so it is wise to be prepared," while the investment scheme offered the opportunity to "expel deep-state operatives, communists, and socialists" from the U.S. educational system. 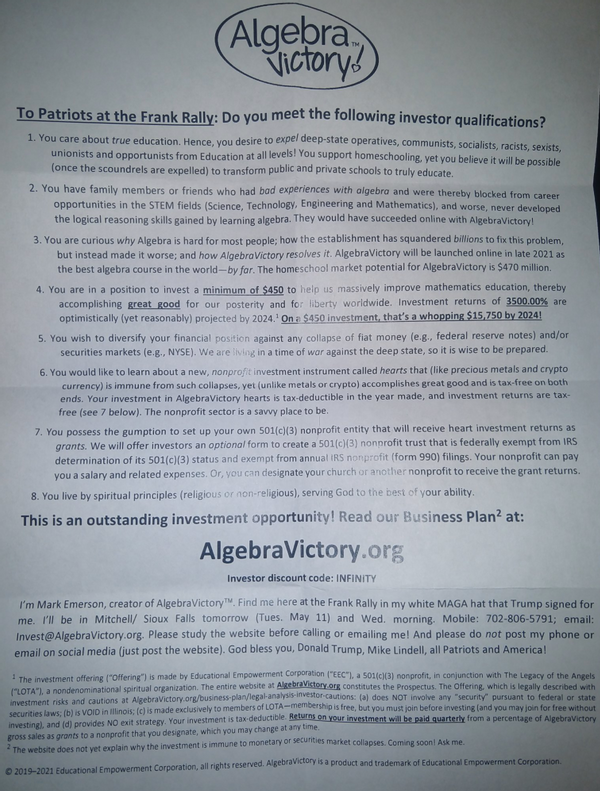 Once the rally ended, representatives for Lindell encouraged attendees to take home multiple boxes of the pillow maven's book. Apparently, Lindell was prepared to hand out 30,000-plus copies of his election fraud movies and books, but as it turns out, he literally couldn't give them away. 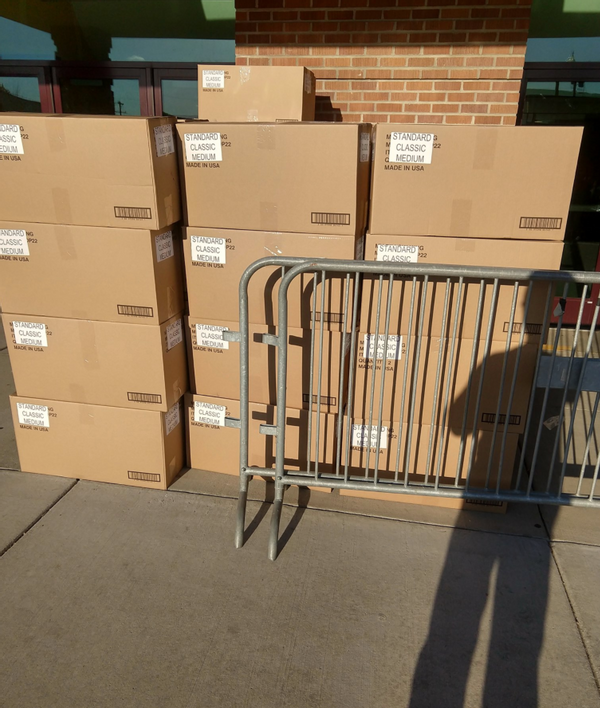 "They were begging people to take boxes of books home to give to addicts so they can be entrepreneurs," an attendee told Salon. 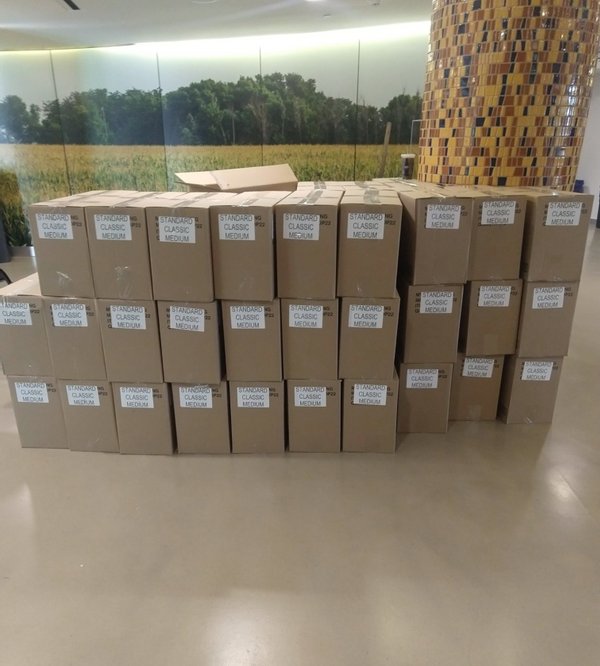 Lindell, who has a unique relationship with this Salon reporter, didn't return a text or call from Salon on Tuesday morning, seeking comment for this story.