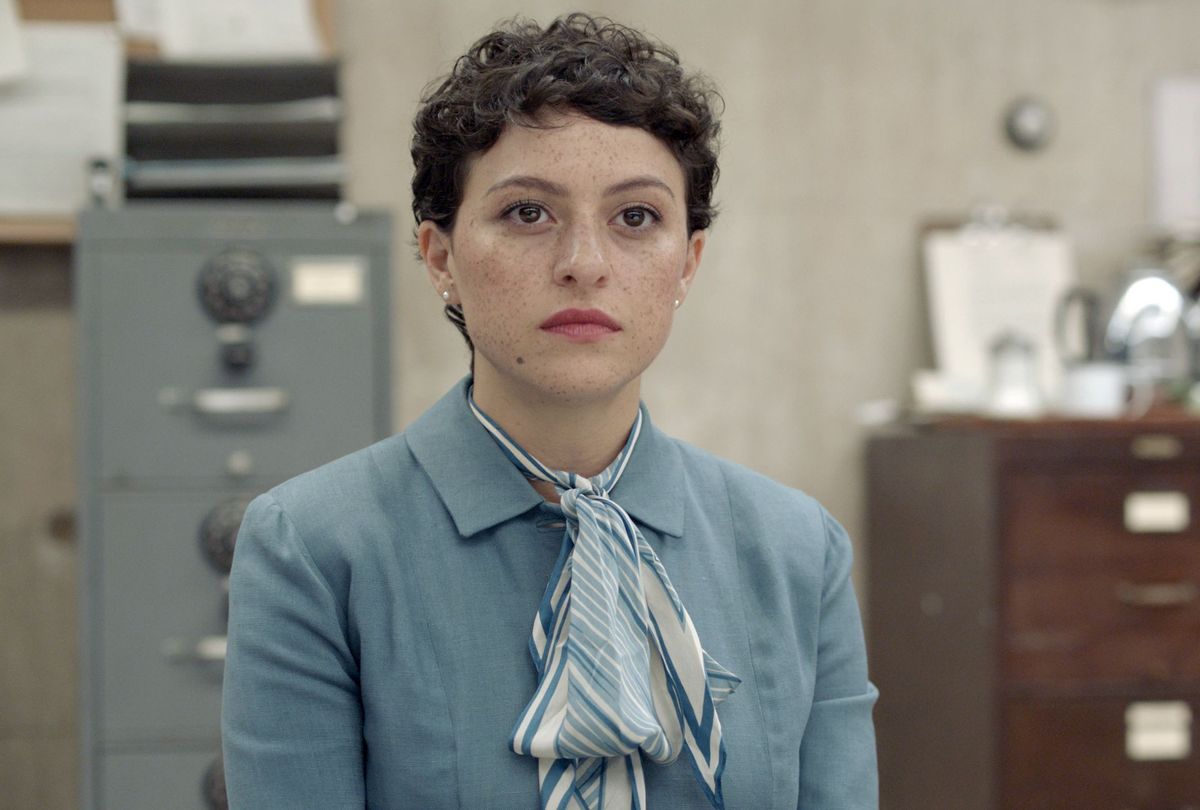 Alia Shawkat in a reenactment in "Pride" (FX)
--

"Pride," for all of its stylistic inconsistency, firmly articulates the meaning of declaring a marginalized population "is not a monolith."

Each of its six episodes is a walk through LGBTQIA+ history, taken a decade a time starting in the 1950s. But routes change along with the time spent and approach taken to various historic landmarks of those 10 years.

"Pride" cites the rock stars and celebrities of the culture but also ensures gay civil rights pioneer Bayard Rustin gets his propers along with activists like Ann Northrop, who recalls the '80s "with both anger, and despair and joy," and transmasculine ballroom artist Marquise Vilson Balenciaga, speaking about the absolute necessity of visibility and support.  Trans advocate Ceyenne Doroshow isn't familiar to the average person; here she is a recurring presence.

Seven queer filmmakers helming these installments, setting the agenda of what is meaningful about their decade from their specific point of view.

Many docuseries can be described thusly but few interpret history as an artist's carousel. Taking this approach means, say, that one director provides a mostly traditional view of his decade save for a reenactment styled, and filmed, with purposeful flourish, while another provides an animated version of resistance flashpoints.

"The Watermelon Woman" director Cheryl Dunye makes her chapter, "1970s: The Vanguard of Struggle," entirely personal, using her installment to profile her greatest inspirations, filmmaker Barbara Hammer and poet Audre Lorde. Dunye explains firsthand how their art and lives interpreted the defining events of that era as they pertain to civil rights.

The self-care revolution introduced Lorde's name to millions by bastardizing one of her best-known quotes; Dunye and other filmmakers in the series take the extra step of discussing her writing and activism in the context of the political winds buffeting them into existence. Hammer, a vanguard of lesbian cinema, is not as well known, which moves Dunye to narrate the experience of being in the presence of the art work she left behind as her partner Florrie shares personal details about their relationship, eyes twinkling all the while.

There are endless paradigms and forms docuseries can take, and since the most popular are attractive chimeras of entertainment and fact, "Pride"'s artistic approach doesn't dilute its legitimacy. Its featured filmmakers run with the latitude and freedom from the constraints to which a classic, "hard history" (if there is such a term) documentary producer may feel beholden.

The drawback of such an approach is that it is light on illumination and context, presuming the audience is coming to a piece like this with some basis of knowledge or will be won over enough by the vibe each filmmaker creates to learn more. You'll learn a few things that you may not know, only maybe not as much as you should.

Some embrace that classic approach more than others as Tom Kalin does in "1950s: People Had Parties" by telling the story of government employee Madeleine Tress's firing through an interpretive historic reenactment starring Alia Shawkat.

The "Search Party" star first speaks as Tress, walking through the hallways of her life story, then speaks of herself in more dreamlike segments before lip-synching to a recording. The same episode employs an almost entirely mute Raymond J. Barry to depict how politicians wielding homophobia against Wyoming Senator Lester Hunt drove him over the edge. We're intended to recognize these actors, but their dramatizations don't dominate this episode.

Some "Pride" installments are thinner than others, which is the nature of any project built around a concept without requiring its various chefs to follow specific instructions. And some, like Yance Ford's view of 1990s are a mixture of potency and pandering.

That work's best moments indict politicians like Bill Clinton for breaking their promises by having people recite their words as the original speech footage plays. The anger and disappointment that registers in their eyes skewers any glamour those archival films may have captured. But its other focus on the rise of '90s queer cinema seems like an awkward means of fulfilling some requirement to uplift that filmmakers, including "Pride" executive producer Christine Vachon.

Mind you, the '90s were a fertile time for indie film and queer cinema in particular. Vachon was a major force in that revolution. Prominently featuring a show's executive producer as a subject is always going to be a questionable choice when a solid mention is more than enough.

Individual bests succeed by making us feel closer to the people talking about their lives or whose stories are told by those who know them best.

A favorite is likely to be Anthony Caronna and Alex Smith's "1980s: Underground" by virtue of its New York City setting and the way writer and performer Michael Musto and transgender activist Grace Detrevarah stroll us through it.

The real magic is in the filmmakers usage of Nelson Sullivan's home movies as a framing device. Sullivan was a guy liked by many, and who managed to capture some 1,200 hours of video footage of the underground scene between 1982 and 1989. The same period encapsulates the AIDS crisis spiking, and Smith and Caronna edit an avant-garde interpretation of the public's confusion and criminal shunning of the ill.

Next to this Sullivan's videos chronicle extreme joy along with capturing the likes of Sylvia Myles and RuPaul long before they became pillars of popular culture. But his friends make him the star along with Detrevarah, one of many people of color whose perspectives form the bulk of "Pride."

This is a series that gives Black, brown and Asian voices their due and points out how much of their work and sacrifice was paved over by the mainstreaming of white male gayness in American culture. Even a the pop culture heavy 2000s episode that kicks off with scenes from "Modern Family" makes Margaret Cho, marriage equality activist David Wilson, and artist and writer Brontez Purnell its stars before landing with the trans activists whose work continues today.

Any docuseries can check off significant timeline clicks receive their due, but "Pride" works because it is because asks us to experience many eras with the people who lived through them. Stretches of it are a bit too facile, but at least it understands that knowing and respecting history can never be a passive spectator sport.