Harry Truman, antisemitism and Israel: On the Jewish state and the Jewish vote 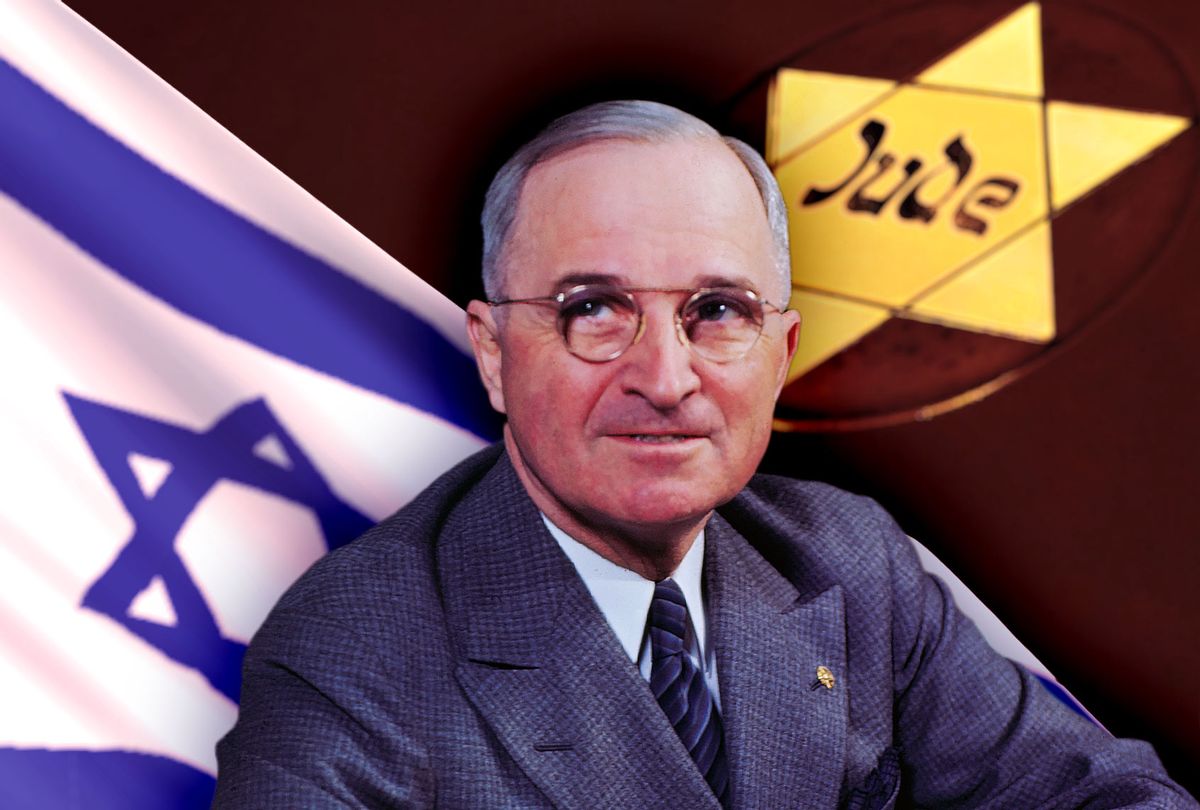 God works in mysterious ways — and so do Jewish voters. To see a perfect illustration of this, look no further than the Jewish community's complex relationship with Harry S. Truman, the antisemitic president who helped Israel come into existence.

If you know anything about Israel, you almost certainly know that the Jewish nation relies on the United States for economic and military support. This is in no small part because the U.S. has the largest Jewish population of any nation outside Israel and because American politicians of both parties hope to win over Jewish voters (and Jewish political donors) by taking Israel's side. When Israel is accused of human rights violations, it can usually rely on American presidents and other major political leaders to have its back. (In that respect, even Donald Trump and Joe Biden are united.) This reality has long frustrated advocates for the Palestinian cause, especially at a moment like this, when the Israeli government is effectively waging war against Palestinians in Gaza.

Let's consider Truman, the first president to have Israel's back. Growing up as an American Jew in the 1990s, I was taught to view Truman as an icon, a hero for the Jewish people, the brave president who opposed his own State Department and became the first world leader to recognize Israel after it declared itself to be a new nation. In religious school I was regaled with the story of how the Chief Rabbi of Israel later told the president, "God put you in your mother's womb so you would be the instrument to bring the rebirth of Israel." Truman was said to have wept with joy.

Maybe that's how Truman is viewed by Jews in retrospect. When he ran for president in 1948, however, he had the worst showing among Jewish voters of any Democratic candidate in 20 years.

Jews have voted predominantly Democratic in national elections since the 1920s, but even by that standard Franklin D. Roosevelt was beloved by Jewish voters. FDR never got less than 82% of the Jewish vote, and topped 90% in his last two campaigns, in 1940 and 1944 (elections that happened while Adolf Hitler was actively trying to wipe out the Jewish population of Europe). But in 1948, Jewish support for Truman fell by one-sixth, to 75% — although it wasn't Republican nominee Thomas Dewey who benefited.

Truman's Jewish support, in fact, was siphoned off by former Vice President Henry Wallace, running on the left as the Progressive Party candidate. Wallace only received 2% of the national popular vote, but won 15% of the Jewish vote — running in the year Israel was created and against the president given credit for helping to make that happen. Despite the antisemitic stereotype that Jewish voters only care about Israel, quite a few of them were so dissatisfied with Truman that they went for an actual left-wing alternative. You could almost hear the Wallace voters saying, "Israel Shmisrael!"

That was no anomaly. Jews have tended to support leftist and progressive causes throughout their history, whether that meant the labor movement, the civil rights movement, anti-war movements, feminism, LGBTQ rights and many more. It is difficult to state decisively why this is true, but the large number of prominent Jewish people involved with left-wing movements and American Jews' century-long voting patterns make it undeniable.

And despite what antisemites may believe, relatively few Jews are "Israel first" voters. Polls old and new alike consistently find that the percentage of Jewish voters who consider Israel a paramount issue is usually in the single digits. A number of polls find that a majority of American Jews are critical of Israel's policies, with only one-third in a recent survey saying they believe Israel sincerely wants peace with the Palestinians. And that's true in spite of the fact that a growing number of Jewish Americans are increasingly concerned about antisemitism, a strong indication that they view the two issues independent of each other.

In other words, ever since the first time an American president stuck his neck out for Israel, American Jews have repeatedly proved that they are not a monolith. They do not have dual loyalties, as Donald Trump implied during his presidency, and they cannot be won over by bribing them with support for Israel.

There is another lesson in Harry Truman's story, namely that people who do good things for Israel are not necessarily true friends of Jews. Indeed, if American Jews in 1948 had known more about how President Truman perceived them, he might have received an even lower share of the Jewish vote.

"Truman had an uglier side to his personality and sometimes that side that was prejudiced," Randy Sowell, an archivist at the Harry S. Truman Presidential Library & Museum, told Salon. "I don't deny that at all."

As Sowell recounted, Truman private bigotry was complicated, as is so often true at the individual level. He used familiar ethnic slurs to refer to Jews in general, even though one of his closest friends, Eddie Jacobson, was Jewish. (Truman apparently believed that Jacobson's success in business stemmed from his ethnic background.) Reportedly at his wife's request, Truman didn't allow Jewish people in his home. He described Jews as "very, very selfish" and claimed that "neither Hitler nor Stalin has anything on them for cruelty or mistreatment to the underdog." (Truman also made racist or bigoted comments about other marginalized groups, including Black people and Asians.)

At the same time, as Sowell explained, Truman's public actions are difficult to square with his prejudices. As a senator from Missouri, he wrote letters to his wife that brimmed with contempt for Jews, while also using his platform to advocate helping save Jewish people from Hitler and the Nazis. Even before the Holocaust was over, Truman became persuaded that the Jews' Biblical homeland would be a fitting place for the survivors to build a new nation. When Secretary of State George C. Marshall, whom Truman deeply admired, urged the president not to recognize Israel because he feared the political tension blowback from Arab nations, Truman did so anyway.

Yet even in this story of humanitarian impulses overcoming antisemitic prejudice, there are some sour notes. Truman helped legitimized the new Jewish state by being the first world leader to recognize it, but did very little to help the native Palestinians who were being persecuted or driven into exile. When Truman at one point refused to meet with a Zionist activist to discuss Israel, his longtime friend Eddie Jacobson stunned him as he burst into tears, ultimately changing his mind. During this conversation, Jacobson compared the Zionist activist to one of Truman's personal heroes, Andrew Jackson. Neither man, it seems, realized the cruel irony in linking the issue of Israel's existence to a president widely reviled today for his racist and genocidal policies.

The moral here is that just as Jewish voters work in mysterious ways, so do the politicians they depend upon to protect their interests. Harry Truman was a bigot who wouldn't let Jews enter his home yet felt compassion for the millions terrorized and murdered by a fascist dictator. We've seen a more recent president, Donald Trump, tell Israel it may do whatever it wants while still indulging his supporters' overt antisemitism. Politicians on the Christian right may support Israel, but largely because of a half-baked prophecy holding that once Israel is a Jewish nation again, the messiah will return and Jews will either convert or go to hell.

Similarly, while leftist or progressive politicians may make some Jews uncomfortable when they criticize Israel, it is important to listen closely to what they say. Of course it's contemptible to traffic in stereotypes about Jews being greedy or secretly controlling the world — the kinds of stereotypes Harry Truman quite likely believed — and anyone who exploits those beliefs in criticizing Israel deserves to be condemned. But criticism of Israel, or any other nation, that is rooted in facts and evidence is quite another matter. The lesson we can draw from the antisemitic president who helped create Israel is perhaps a lesson about challenging our assumptions and looking past them, and about learning to live with complexity and contradiction.