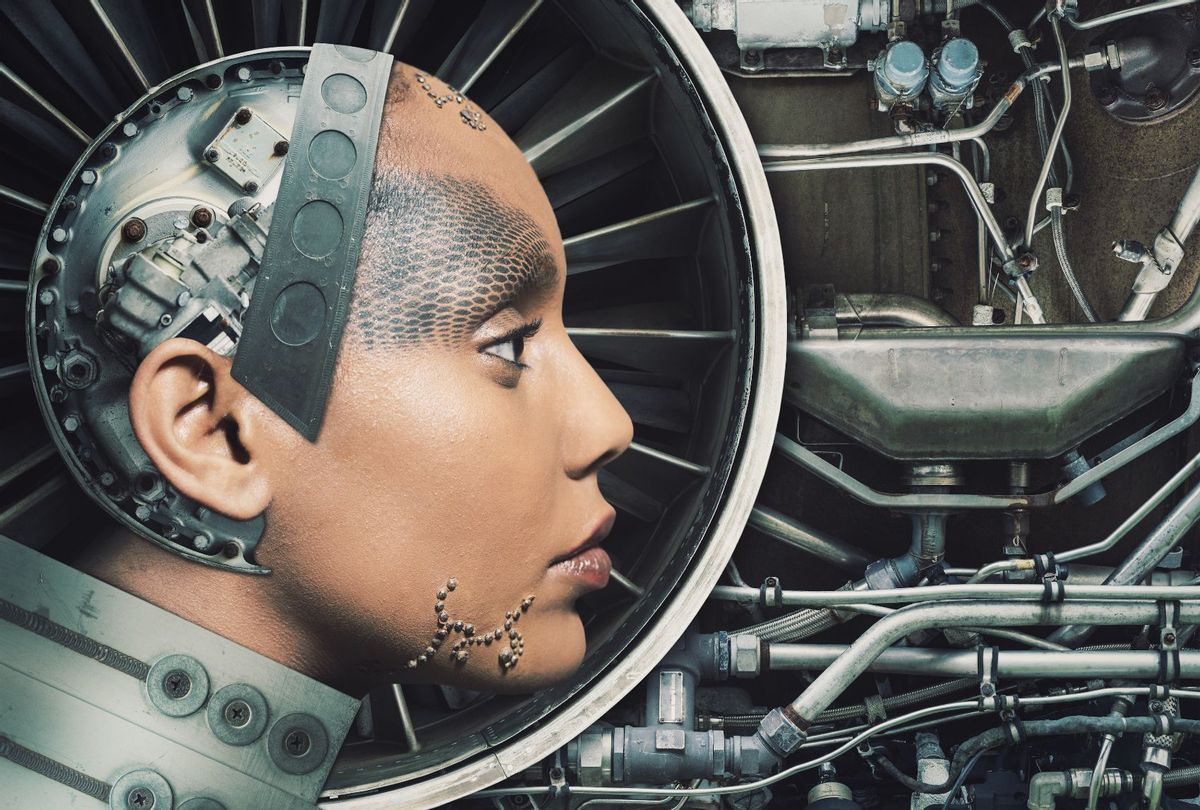 The female engine, woman as a machine (Getty Stock Photo)
--

The year 1968 was one of racial progress and retreat: the year athletes raised their fists in a Black power salute at the Olympics, the year Martin Luther King Jr. was slain. In the world of science fiction – far ahead in an invented future – the period brought more progress. "Star Trek" aired the first kiss between two characters of different races on television. And in literature, Ursula Le Guin launched the Earthsea Cycle, a series whose protagonist had "red-brown skin," Le Guin's attempt to correct a canon populated by pale heroes.

At that point, the battle (as fought by a white woman) was about representation. In the years since, writers of color like Octavia Butler and N. K. Jemisin have expanded the role of science fiction to more explicitly dramatize and question racial hierarchy and oppression, furthering the socially transformative role of the genre.

Today writers are employing speculative fiction to pick apart the system built on racism – contemporary extractive capitalism – as well as the large-scale displacements resulting from imbalances in the safety and wealth of nations, or what we refer to as immigration. In lieu of epic series, many of these new releases come in the form of short story collections, which allow the imagination of a multiplicity of futures in order to reflect a multiplicity of readers. Three recent collections from writers with roots in Nigeria, Japan, and the Dominican Republic direct their slant lenses toward capitalism, patriarchy, and white supremacy.

Brenda Peynado's "The Rock Eaters" (Penguin, May 11) opens with "Thoughts and Prayers," the phrase often repeated following the school shootings the U.S. now takes for granted. In a mainly Latinx suburb in Florida, neighbors greet each morning by prostrating themselves before mute, bird-bodied angels that sit and s**t on their roofs. The protagonist, a teenage girl, knows her family owes its good fortune to their angel:

Out of all the angels, ours was considered the most blessed of the neighbourhood. When my parents came to this country after college, this house was the first one they looked at, and their immigration papers arrived miraculously within the week. While others searched for homes and jobs for months, my parents sailed into their new life, prayed gratefully to their new rooftop patron.

The angel represents the dumb luck that immigrants, in reality, require to survive: that their boat doesn't capsize, that the officer lets them through, that no one back home is relying on their Western Union payments. Of course, not everyone is so lucky, and the protagonist's Indian neighbors host the block's worst angel, one who allows mold to spread on the walls, the father to get laid off, and a tree to fall on both house and car.

Blaming the angel – rather than a capitalist system that requires winners and losers – is how Peynado points to the collective American delusion that immigrants join. That the neighbors are minorities within an already minority community becomes more painfully obvious when a school shooting targets the Indian family and sparks the arrival of a white anti-shooting activist group that champions arms and travels cross-country on money gleaned from corporate sponsors.

Meanwhile, E.C. Osondu's "Alien Stories" (BOA Editions, May 11) paints the dynamic between whites and non-whites in painfully funny scenarios predicated on the pun of the title: the stories are alien because the characters are immigrants. In "Alien Enactors," white visitors pay for people of color to create culturally authentic experiences, or at least the experiences they are led to believe are authentic by the clever narrator:

My duty was to enact Africa for guests, and oh boy, how they loved my act. I pulled no stops. I made each of the clients wear a colorful daishiki and I had them gather around in a circle and then encouraged them to empty their minds and get rid of their old personalities and visualize themselves sitting under an iroko tree in an African village square. I started my enactment with the obligatory proverb about how it took a village to raise a child – popularized by a female politician. Allow me to make a little confession here: in all my years growing up in Africa I had never heard anybody use that particular proverb.

The performance of ethnic identity is one that many minorities first learn as children at school show-and-tell sessions and later may even make a living from, as seen in places ranging from Bourbon Street to corporate diversity trainings. As the story advances, Osondu points to the ways that minorities, wanting to earn a living through white patronage, may abandon each other when they most need each other.

One release this year is in fact only new in English: Izumi Suzuki's "Terminal Boredom" (Verso Fiction, April 20) a collection of stories written in the 1970s and 1980s. In "Women and Women" (trans. Daniel Joseph), Suzuki writes of men as genetic aberrations with a brief presence on Earth, the victims of their own strivings for war and technological progress. By polluting the environment to excess, they create the conditions for their own genes to disappear – a fact that holds true in the nonfictional world, where male sperm can swim faster but are also more likely to perish.

The few men in Suzuki's post-apocalyptic world are whisked to a "Gender Exclusion Terminal Occupancy Zone," a bunker where they are referred to only by number and visited by schoolchildren for grim lessons in male inferiority. Women are encouraged to pair off in same-sex relationships that merely replicate the gender norms of heterosexual ones, with one partner earning money while the other keeps house.

Suzuki's story, while laced with the same dry humor of Peynado's and Osondu's work, dwells in a more morally ambiguous space, pointing both toward and away from traditional gender. After pointing to the faults of the patriarchy, the story depicts an equally terrifying universe controlled by women. A young narrator connects romantically with a boy in hiding but displays no emotion when her grandmother reports him to the authorities. Instead, her feelings arise on a fictional page: the narrator documents the boy in her diary knowing it could be the thing that sends her to jail, willing to risk it to write toward a freer future.

This year's short story collections are a vital expansion of the English-language canon, expanding discussions of immigration, climate change, and gun control. "The future is constantly changing; however, this constant change is a function of our actions in the present," writes Shyam Pradheep in an essay on the role of authors of color in science fiction. "The way we view the future will influence how we shape our future." In the new speculative fiction, the futures we shape are many.