The filmmakers from Netflix's Oscar-nominated short spoke to Salon about making their devastating, wordless film 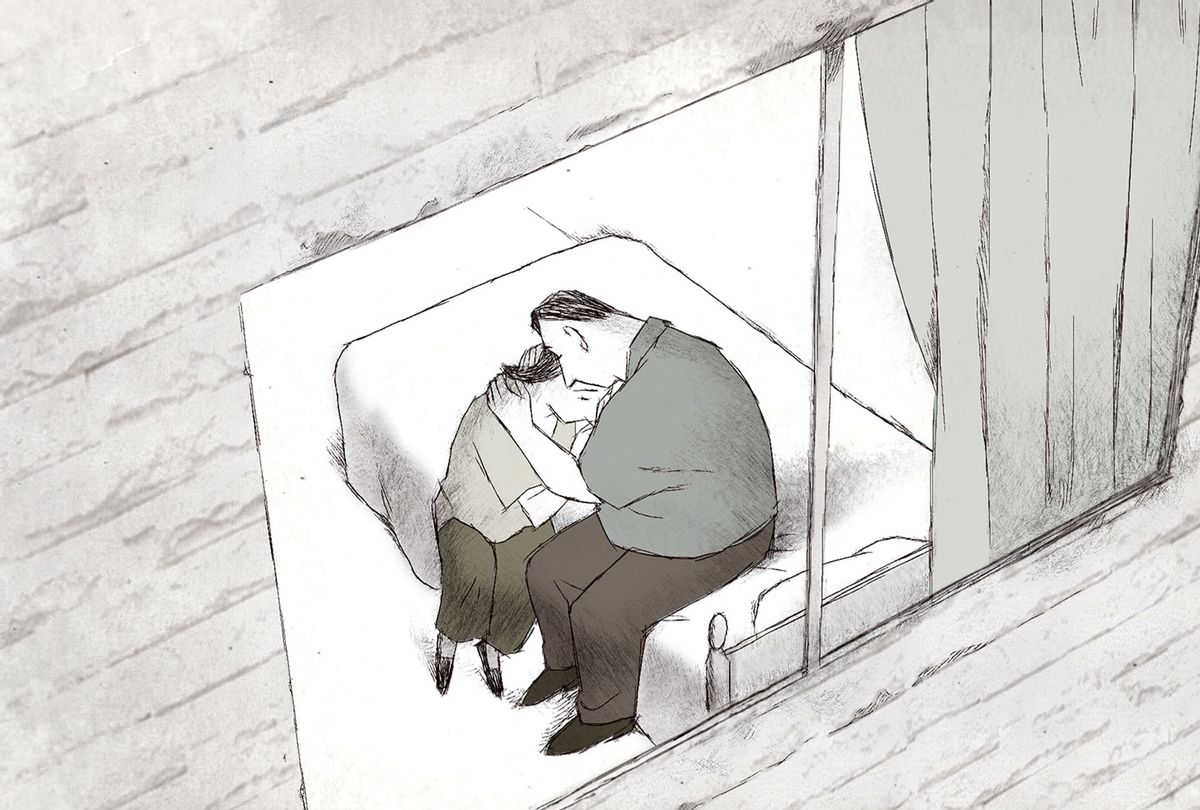 If Anything Happens I Love You (Shorts TV)
--

The frontrunner for the Oscar for best animated short, "If Anything Happens I Love You," is written and directed by Will McCormack and Michael Govier. The film, available on Netflix and elsewhere through Shorts.TV, is a poignant meditation on loss.

The story, told entirely without dialogue, recounts the emotions experienced by two parents whose daughter was killed in a school shooting. An all-female animation team captures the characters' various moods, from love and sadness, protectiveness, and despair, using shadows, color, music, and sound. The filmmakers also artfully convey the passage of time as the narrative shows the child's mother and father remembering their daughter as her shadow guides them on a night of reflection.

The short qualified for the Oscar after winning a top prize at the Edmonton International Film Festival. The writer/directors spent more than two years on the film from the script to the first screening, which took place four days before the pandemic shutdown.

McCormack and Govier, along with their producer Maryann Garger, spoke with Salon about "If Anything Happens I Love You," which presents a pressing social issue in a powerful way.

Congratulations on your nomination. What has campaigning been like in this strange year?

Will McCormack: We just got a billboard on Santa Monica Boulevard, and that was really cool, because that's pretty unusual for a 2-D animated short film about grief to have a billboard in LA. I don't know much about campaigning, because I've never done it before, but we have a great team at Netflix. And we are excited to talk about the film and get it [seen] as much as possible. We were fortunate because we made a tiny, independent film and we got picked up by Netflix, and the film played around the world, and it went viral on Tik Tok and has nearly 70 million views, and people know about our film and it's easy to find.

What prompted you to make this short, and make it animated?

Michael Govier: It was a story we felt could only be told in animation, and it was the only gateway to have this discussion and show the subject matter of a shooting and this kind of loss and what this grief looks like. We thought it was the perfect gateway to bring people in and amplify the characters and the emotions of the scene. Will and I have been huge animation fans forever. Will wrote for Pixar, and I wrote things for animation that have not launched. But we're both storytellers. The medium doesn't matter, it's the medium that needs to be used.

You also had an all-female animation team. Can you talk about assembling that?

Govier: It was interesting. We went to Maija Burnett, a professor at Cal Arts. We wanted to provide an opportunity for up and coming artists that might not get this opportunity. Normally animation directors have to put in a decade plus before they get a shot. Youngran Nho, our animation director, had just graduated and Maija had suggested her. Will and I met with her and it was a perfect fit. As the film progresses, Youngran said she had two other friends who just graduated from Cal Arts, and she brought them on. We hired the best people for the job. Halfway through the project we realized that half of everyone here is female and found these shocking statistics, that in animation, that's really rare. USC posted statistics that 16% of all films have female animators, it was shockingly low. I proud we can move the number in a healthy way.

I'm curious about how you conceived of the images and the animated format and elements that make this short so vivid?

McCormack: The shadows were the providence of the film. Michael pitched me this beautiful image of these shadow souls disconnected from their human hosts because they were in so much agony that they couldn't reach one another. It was really a beautiful, Jungian distillation of what grief and loss felt like. That you have this disconnect. We wanted complete and total and stark minimalism; we were going for total parsimony. We were going for a look of loss and grief; it should feel barren and desolate. We had a cardinal rule that anything that didn't need to be in frame, we had to remove it. We kept stripping the film, and in a film with a subject this tough and sensitive, we thought less was more. By committing to that minimalism, it would hang a lantern on the emotionality of the scene. Moreover, it seemed to work in the memory section of the film, when you go back in time, because I think implicit memory works that way. When you remember the past, you don't remember everything that was in the room, but you do remember how you felt. In a film with no dialogue, and making something so sparse, it was daunting, but once we committed to it, it really started to pay dividends. We wanted it that unvarnished feel, we wanted it to feel raw and rough and float and feel like it was rough around the edges. A lot of credit to Youngran Nho.

Govier: We explored other [visual] options, and it was clear quickly that it wouldn't look good. We wanted the story to dictate the style. How does this image help the story? We looked at turn-of- the-century drawing in newspapers. We got inspiration from that unfinished look.

It's really effective. Can you discuss your approach to keep this as a film without dialogue?

McCormack: I'm a screenwriter by trade, that's my background, and as a screenwriter, you are always trying to be economical. How can you be laconic and lean but also be poetic? This felt like a great challenge. The first incarnation of the script, we had a couple of lines, but like the rest of the film, we kept removing it. Could we tell a whole story with just images and music? It felt like a creative challenge. But we felt like we didn't need it. Also, the film played very well around the world because there was no dialogue. Everyone could approach and embrace because it was art and music and story.

Time is always a key factor in short films; it supports the story. Can you describe your set up, suspense, payoff approach to the narrative?

McCormack: The film takes place in the course of one night. The shadow selves jump into the past, but in the real world, it happens in one night. The parents are in the bedroom having the conversation they have been unable to have. They are able to be there for one another during a hard time.

Govier:  As for as the time and structure, we wanted the film to unfold in a very inquisitive way. At the beginning you feel this is a film about divorce, and it slowly unfolds, there's actually a cause for this thing and it's not about that. We really wanted to guide everyone to this moment but not force you to feel this at this moment. We did want to make the beats so hard that we're pivoting to the next section. We talked about the film feeling like fog, where it just rolls in around you, and then you're surrounded by it, as opposed to hitting you with these hard markers. We let shots hang, we let moments hang, to give space for what's going to come next.

What motivated you to address the topical issue of school shootings in the way you did?

Govier: We wanted to show from the parents' perspective what that loss looks like. The news cycle moves on to how many people were murdered, and who the shooter was, and these other narratives. We wanted to focus on what the parents look like, and what that life looks like, and what that grief and loss looks like. Those people are still there. We are older, and we grew up without active shooter drills. A lot of our animators are young, and we talked about that, and they experienced [active shooter drills] and said, "Yes, this is what you do." We are in shock that this is a way of life you have to participate in.

McCormack: Gun violence is not indiscriminate. It's not someone else's problem, it's everyone's problem. It happens in schools, it happens in grocery stores, it happens everywhere. Two of our animators were at the Garlic festival in Gilroy, where there was a horrible shooting. They left just prior to the tragedy. This is something that effects everyone in all walks of life now, so we felt drawn to write about it.

I'm curious what this nomination means for you in terms of your careers, especially if you win?

McCormack: We're ready for "Spiderman!" [Laughs] We'll see. It was the best filmmaking experience of my life, working with Maryann, who is an incredible producer. Michael and I had this story we knew how we wanted it to look and needed a great producer. She put wind in the sails of this film. We've already written another short film. We love short film content, and we love that movies can be told in 12 minutes and not 120. We love that places like Netflix are taking chances on small independent films. It's just a really cool time to be making short film. We do want to work in longer form. We are setting up a feature, but we're amped to make another short. We loved being on the festival circuit, unfortunately it was virtual. We want to keep making stories that have something to say.

Govier: Maryann could teach a master class on how to be an outstanding producer. She gave so much confidence to us, and believed in us when other people said, "No, we don't think you can do it, you haven't done it before." There was this Catch-22. She believed in us and said, "You have the story, you see the vision, and you can do it," and that is the greatest producer you could ever have.

Maryann Garber: We really made it out of passion and sheer will. We had very little money. We had a great partnership and grant with Film Independent and we discovered their fiscal sponsorship program which helped us to raise the little money we did have. It was great overcoming the "No's" and the countless obstacles. It was very satisfying to be at this unfathomable position where this movie has gone.

Govier: Maryann, where did we physically make the film?

Garger: We made it at one of three kitchen tables. Mine, Michael's, or Will's. We got together every week. Our definition of success is, of course, all about the message, but it was also just to finish. To be on Netflix and get 70 million views on Tik Tok, and Oscar nominated seems unreal.

McCormack: With indie film, no one's told you that you can't do it. We're directing for the first time. This was Maryann's first time producing a 2-D short. This was Youngran's first job. So, there was a spirit, "We can do this," because no one knows. You all believe in each other and the indie spirit of that bolstered us. It's hard to duplicate. It's all downhill from here.

"If Anything Happens I Love You" is streaming on Netflix or can be viewed in theaters with the other Oscar-nominated shorts. Ticket information can be found at Shorts.TV.