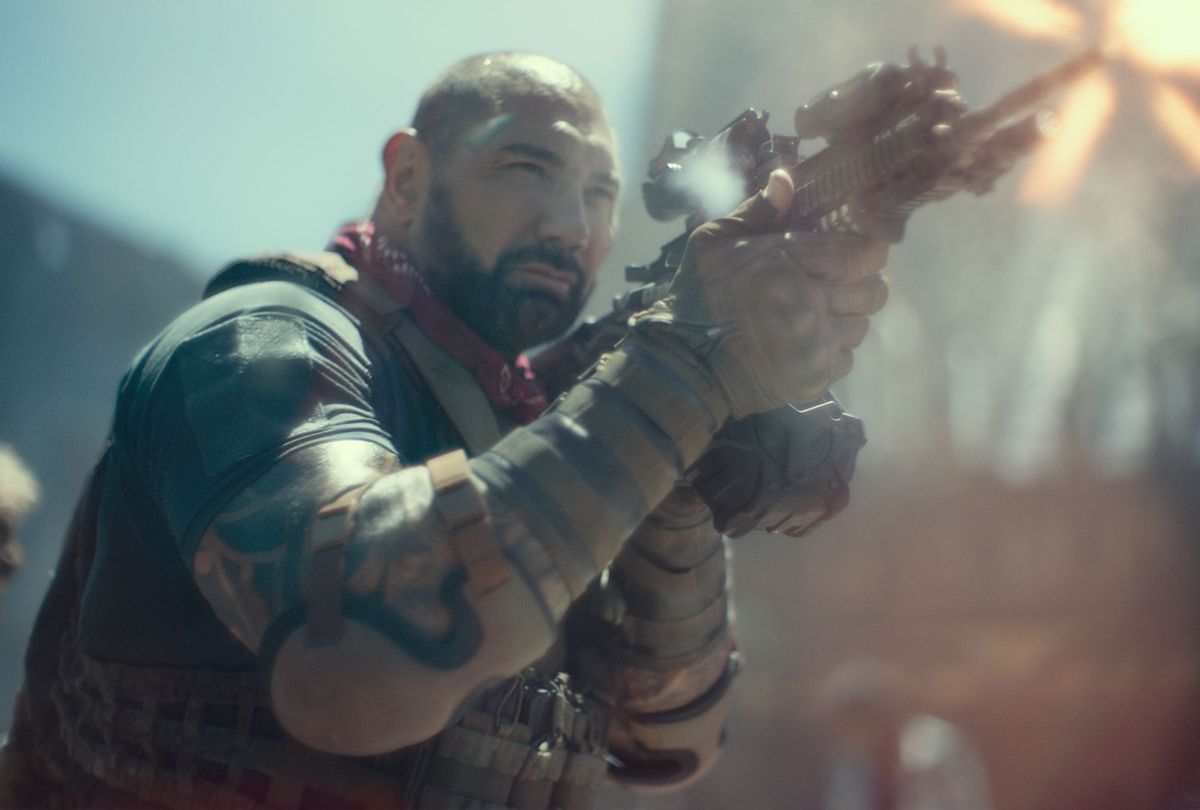 Dave Bautista in "Army of the Dead" (Netflix)
--

Every zombie fable boils down to insatiable hunger, both as it pertains to the undead and the forms it takes among the living. That part is where each story diverges. In George A. Romero's 1978 masterpiece "Dawn of the Dead," survivors took refuge in a mall, but they also hoarded its supplies.

Zack Snyder's contribution to the genre accentuates desperation. In his 2004 remake of "Dawn of the Dead" the zombies are sprinting, roaring killing machines that consume America before the opening credits roll. In the aftermath of that, hopelessness that proves to be the slow, shambling, inescapable inevitability that does in everyone else.

His latest, "Army of the Dead," is not that film's sequel. It could have been, since the main hero is a veteran of the so-called "zombie wars." But the desperation evoked here is of a different type, one relatable to everyone on the losing side of America's expanding wealth gap.

That describes almost everyone, including sidelined mercenary Scott Ward (Dave Bautista). With his friends Maria Cruz (played by Ana de la Reguera) and fellow soldier-for-hire Vanderohe (Omari Hardwick), collectively known as Las Vengeance, he earned some notoriety for saving the Secretary of Defense from zombie hordes that overwhelmed Las Vegas.

Extraordinary heroics gained Ward a medal and little else; some unspecified amount of time later he's making ends meet by flipping burgers. Cruz is a mechanic, and Vanderohe works at a retirement home. All hold honest jobs, but the pay is low enough that it is hard for them to refuse an unethical job offer from billionaire casino owner Bly Tanaka (Hiroyuki Sanada).

Having walled in Las Vegas shortly after it was lost, the government decides to nuke the place from a distance, just to be sure. On the eve of this fire festival, Tanaka decides he really wants the $200 million in the safe beneath his establishment back in his hands. He doesn't need it, he just wants it. For Ward's trouble he and Las Vengeance will receive a cut of $50 million to divide as they see fit.

Zombies can symbolize any number of societal ills, but in "Army of the Dead," Snyder — who directed, produced and co-wrote the script — makes economic uncertainty the real killer. Regardless of what happens in Vegas, and to it, the billionaires will keep getting richer while the unluckiest of struggle in a quarantine camp on the outskirts of the city, lorded over by a dictatorial and abusive guard (Theo Rossi). This also happens to be the place where Ward's estranged daughter Kate (Ella Purnell) volunteers.

All of this makes "Army of the Dead" sound more serious than it is. In reality, Snyder and his screenwriting partner Shay Hatten have created a piece that is fundamentally a temple to popcorn cinema — or an adrenalized, ballistic bacchanal. Our mercs and its zombie masses are mere sacrifices to that end.

In the same way Las Vegas is a tribute to excess, "Army of the Dead" does an outstanding job of rewarding people who love movies, especially the ones swimming in oceans of bullets and carnage.

Some homages are obvious to the point of imagining them in the concept pitch: What if you shoved the impossible heist of "Oceans 11" inside of "Aliens," and replaced the xenomorphs with down-to-Earth, all-American zombies? What if you borrowed the concept of "Escape From New York," except you're fleeing, like, New York, New York from the Strip? Pay close attention to appreciate the artful genuflection to classics like "Excalibur."  Also, did we mention there's hundreds of zombies?

You'll know whether this movie is for you in the same way "Godzilla vs. Kong" either had you at hello or repelled you straightaway. All you need to do is read the title. But that clash of the monsters takes its story very seriously, whereas this one revels in overkill and lumbers into ridiculousness in every way imaginable from the start.

Setting aside the explosions and bloodlust, watching Bautista tap into a kind of softness and vulnerability makes him consistently watchable. He looks physically imposing as ever, but he emphasizes endearing Ward to the audience where other actors would be content to run and gun the role. You'll want him to make it and more to the point, to truly live if he does.

The late addition of Tig Notaro's helicopter pilot Marianne Peters is similarly inspired. Every action movie needs a touch of comedy to lighten the mood, but Notaro's desert dry personality is what wins this role.

(Notaro's inclusion is also a technical achievement: she was brought in late to replace disgraced comedian Chris D'Elia after he was accused by multiple women, some of them underaged, of sexual misconduct. Her part was filmed separately, but you'd never know she wasn't there with the rest of the cast.)

Most action film directors and writers don't bother explaining why hard cases like Ward, Cruz and Vanderohe would wager their lives against overwhelming odds. But Snyder and Hatten write Peters to seem a lot more like the average Jane, to the point that when Ward and Cruz approach her she's such an existential funk that she doesn't bother asking about the possible dangers.

"Why would I want to know the risks?" she asks. "Two million dollars? That's a lot of cash. Listen… I hate my life so deeply. If I had two million dollars, my life would change drastically. Yeah. Thank you. Yes." Notaro's wry delivery here is a mere amuse bouche to some of the background work she does later. But even better than making us laugh, she enables us to understand why anyone would board this mission.

Joining Notaro's pilot is German safecracker Ludwig Dieter (Matthias Schweighöfer, a close second behind Notaro in the contest for the best reason to watch this) and a couple of gun-loving social media influencers (Raul Castillo and Samantha Win). Tanaka's security head Martin (Garret Dillahunt) tags along too, enlisting the help of a French guide and fellow gunslinger called Lily (Nora Arnezeder).

Staging the madness in Las Vegas only jacks up the maximal feel of it all; it's no coincidence that the impersonator shown in the moments before Sin City falls isn't Elvis, but Liberace – the man who famously declared that too much of a good thing can be wonderful. Yes, "Army of the Dead" shouts, it sure is.

Everything Snyder's done since "Dawn of the Dead" – from "300" to "Watchmen," or on the lower end of the quality scale, "Sucker Punch" or 2016's "Batman v Superman: Dawn of Justice" – is an exercise in overdoing it. That's not necessarily a criticism; "Zack Snyder's Justice League" was a lengthy haul, but a consistently engaging one as well.

But maybe that's just what we need. Oscar contenders may not have fared well in the streaming age but bombastic spectacles like this have performed swimmingly, especially as pandemic restrictions have relaxed and people are starting to return to theaters. Netflix is also counting on this  story being the start of something, not the end; an animated spinoff and a series prequel are both in the works.

Death comes for us all, and if we're fortunate, it's a very slow walker. Enjoying "Army of the Dead" doesn't require much more than appreciating that. Our collective starvation for thrills and wonder probably sauces its appeal even more. The pandemic isn't over but we can at least perceive its end; we've also long accepted the fact that we're stupid and contagious, but also bored and antsy and hankering for excitement. In that respect this movie is a solid gamble, one that may leave you saying, "Yeah. Thank you. Yes." That's probably all we need to know.

"Army of the Dead" makes its streaming debut Friday, May 21 on Netflix.