The "Quiet Place" sequel is a fantastic, visceral nail-biter – resonating with our pandemic paranoia 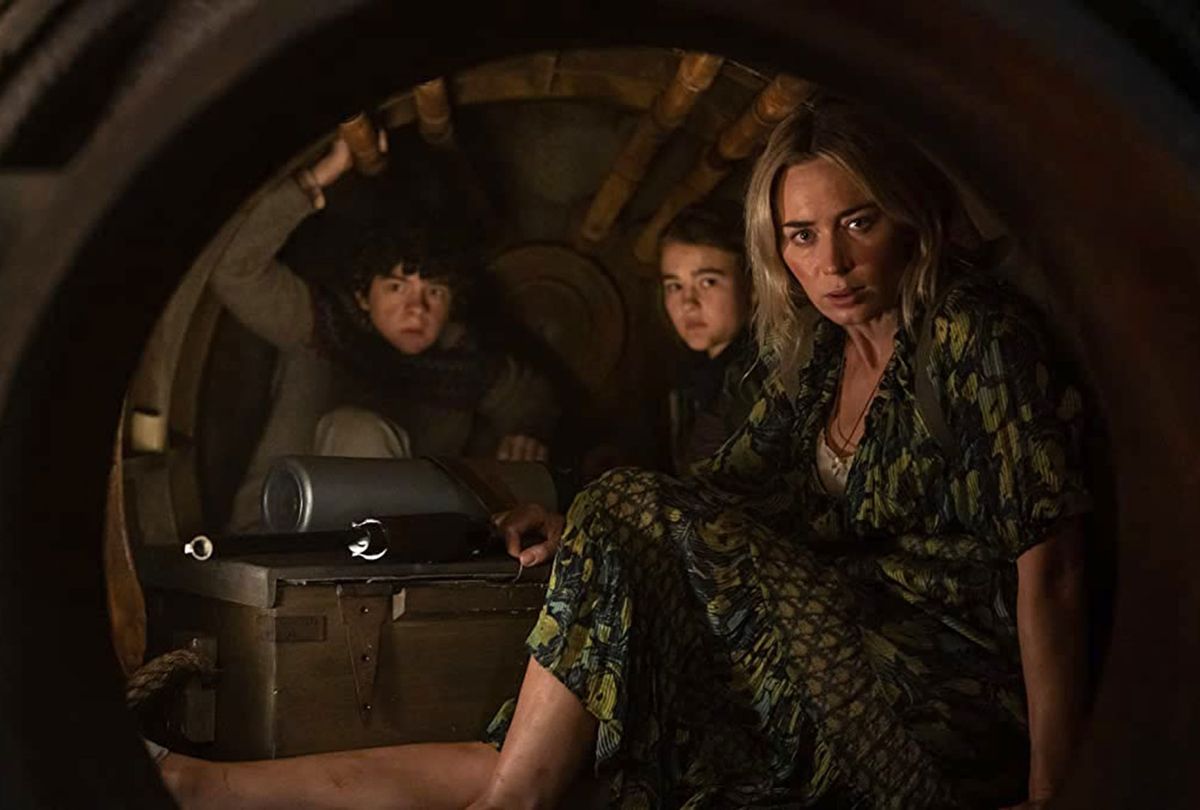 The "Quiet Place" sequel, merely labeled "Part II," was shot before the COVID-19 era, but I can't think of a better movie to see in theaters as we attempt to move past the pandemic than this one.

Written and directed by "The Office" alum John Krasinski and starring real-life wife Emily Blunt, who plays his widow in the film, Cillian Murphy ("28 Days Later") and Djimon Hounsou, "Part II" picks up where its predecessor left off. The four members of an American family must find a way to survive in a post-apocalyptic world after bloodthirsty aliens land on our planet to hunt us. Because these aliens have hypersensitive hearing and are otherwise blind, the key to surviving is to remain as quiet as possible. Now that the main characters have learned how to severely weaken the aliens so that it is easier to kill them, however, they must join an old family friend to stay alive while trying to spread their knowledge to the rest of humanity.

The plot may be simple, but the film is packed with visceral moments that stick to your ribs. A standout sequence is when two characters are trapped in a small enclosure with dwindling oxygen while one of the monsters lurks outside. If they open the door, they will be immediately detected and devoured, but if they stay inside for much longer they will suffocate. On another occasion, characters brutally beat each other for resources — but in a world, mind you, where even the slightest sound can get you eaten. The result is an action scene with some rather cleverly abrupt and disjointed fight choreography.

As far as the moviegoing experience itself, the appeal of watching "A Quiet Place Part II" is that it's an exercise in cinematic craftsmanship: The director must tell an engaging story with minimal dialogue, the cast must act primarily through their faces and body language, and so on. Part of the original's appeal was that it demonstrated how filmmakers don't need constant explosions, explicit gore and piles of exposition to reach audiences. A tense atmosphere, strong writing and interesting ideas can be just as effective, if indeed not more so. The sequel doesn't find any new twists on the original's strengths in that regard, but it retains them, and that is enough.

A special shout-out belongs to actress Millicent Simmonds, who plays the family's deaf teenage daughter in the movie and is also deaf in real life. In a lesser flick, the character's deafness would have been used to relegate her to being mere sympathy bait and highlight the movie's "no sound" gimmick. Here she is a three-dimensional character, strong but still flawed, and her disability winds up giving her meaningful insights ("deaf gain") into the world's predicament that feel logical instead of contrived. In the first movie, Krasinski's performance stole the show; here it is Simmonds' turn in the spotlight.

In addition to being a great scary movie, however, "A Quiet Place Part II" also works for reasons that Krasinski and company could have never imagined. This is where the COVID-19 era enters the picture, and I feel compelled to add a personal story: "A Quiet Place Part II" was the last movie I was supposed to review in theaters as a Salon film critic before the virus outbreak prompted nationwide shutdowns. My screening was canceled mere hours before I was supposed to attend. All of this happened only 14 months ago, but it feels like a lifetime has passed. Fortunately I managed to wind up in the same theater (and reserved the same seat) that I would have occupied the first time around. ("A Quiet Place Part II" has without question required the single longest waiting period between purchasing a ticket and actually putting my butt in the chair of my entire writing career.)

This is not to say that the film is perfect. There are times when it tests an audience member's ability to suspend disbelief, particularly when you expect a squalling baby to never be noticed by the extraterrestrials. The movie also hinges on a plot point that, while I won't spoil it, I will note appears ripped off from one of the dumbest twists in M. Night Shyamalan's filmography. Finally there were moments that felt padded, as if Krasinski was straining to meet a running time requirement.

When I got to the theater, I asked several of the employees what it was like to work again after the pandemic. One of them was extremely outspoken: He was outraged that people would go into the theater without masks, did not believe they should even be opened while the pandemic still rages and was convinced he and his coworkers were being put in unnecessary danger. It was obvious that he was scared, and none of his colleagues seemed to blame him. Our conversation stuck with me as I sat in the auditorium, where I was joined by my partner and a handful of fellow moviegoers in the way back.

While public health experts continue to debate whether and how we should reopen our society, the employee's underlying point is reflected in the themes of the movie. Like the characters in "A Quiet Place Part II," we have been forced to inhabit a universe very different from the one we've known most of our lives. A deadly menace surrounds us, one we don't fully understand and struggle even to detect, and to stay safe we have to quickly learn a whole new system of "rules" — public health guidelines in our world, stealth tactics in Krasinski's fictional one. We have also had to watch as the ugliest sides of human nature have been brought to the fore, be it the feral humans who have survived in the "Quiet Place" universe or the people here who refuse to wear masks and get vaccinated.

Obviously the filmmakers could not have known how much their narrative would resonate with audiences in 2021, given that the movie was made before the outbreak. Yet because "A Quiet Place Part II" happens to share these powerful parallels, and because it is made by such talented people, it winds up being an unintentional allegory for this moment in our collective history. I'd recommend it to horror fans even if the COVID-19 pandemic had never happened, but I can't think of a more fitting way to return to movie theaters in our frightening new world than with this particular tall tale.

"A Quiet Place Part II" opens in theaters Friday, May 28.