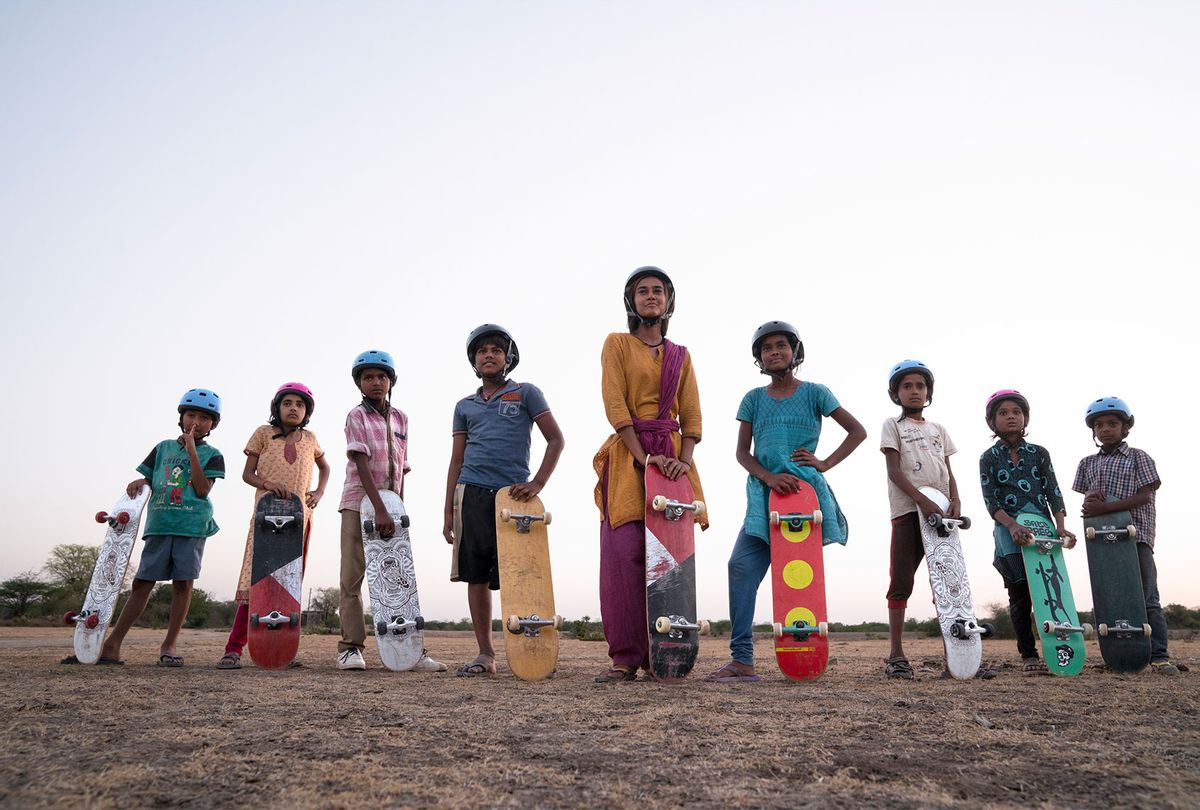 New to Netflix as of June 11, the uplifting international film "Skater Girl" isn't your typical coming-of-age tale. Following the inextricably connected lives of two young women at the heart of a rising skateboarding trend in the rural Indian village of Rajasthan, the movie presents the story of a teenage girl named Prerna (Rachel Sanchita Gupta) torn between a life of tradition and quiet obedience to her parents, and Jessica (Amy Maghera), a British Indian woman who comes to Rajasthan to rediscover her true heritage.

Jessica unexpectedly falls in love with the village children as she teaches them skateboarding and changes their lives by gifting them with skateboards of their own. But on her journey to construct the kids a skate park with her friend Erick (Jonathan Readwin), she faces a number of obstacles — not the least of which include outraged adults, incensed by her defiance of tradition. In many ways, Prerna's struggles mirror Jessica's — skateboarding has given Prerna her first taste of freedom, confidence and power, but her rigid and traditional father has different plans for her.

Beautifully shot in the Indian village of Khempur, "Skater Girl" is a feel-good summer classic that is deliberate in its choice to tell an authentic story, rather than center white audiences. Director Manjari Makijany, who co-wrote the film with Vinati Makijany, brings to life the relatable yet underrepresented struggles of many audiences, including Indian Americans, Asian Americans, immigrants, children of immigrants, and anyone with complex relationships to their heritage.

Salon talked to Makijany about her own heritage, avoiding the all-too-common trope of the white and western savior complex, the universality of chasing your dreams as a woman and more.

"Skater Girl" seems to present such an authentic glimpse into day-to-day life in this rural Indian village. Part of that probably comes from how instead of hiring extras, many people in the movie are actual villagers themselves. How did the crew build such a level of trust with the locals for this movie to be possible?

We spent a lot of time in that village before we even began production. We were there building a skate park, and we were there for months before that, finding the place, doing research. The villagers were very familiar with us, and once the skate park was made, we were there training our actors, and the skate park was open to the community, so people were coming and skating. It was almost six to eight months we spent in that village before we even started pre-production. By then, we knew everybody and everybody knew us. So it was a very organic translation, having kids who were part of the skate park, and coming and learning skateboarding, to then be in the film.

In a previous interview you've done, you made really interesting points about how this movie differs from the "white savior" trope. Can you talk a bit about what your thinking or inspiration was to include characters from a western background in the story? Do you think audiences who are immigrants or children of immigrants can relate to Jessica's story of coming back to your roots and facing tension?

I think it's very natural — Jessica is considered an outsider even when she comes to the village. Even though she has ties to India, to the village, she's still considered someone from the outside. I grew up in the city, and was born and raised in Mumbai, but when I got to the village, a girl asked me if I was a foreigner — she asked me if I was Australian. I'm Indian and I grew up there and we have the same skin color. So, it does run a lot deeper than we think. But once they understand what your intention is and what your ties are, you can connect better.

In terms of Jessica's character, it was important for her to have an international background because she had to introduce skateboarding. Before, that village actually had kids make makeshift skateboards, so it found its way into the story. Translating that makeshift skateboard in the village, using that as a catalyst to introduce real skateboarding, we needed someone who was familiar with skateboarding from the west. That was important, and at the same time, not making Jessica someone who was coming to save the kids, but just facilitate the spirit they embody, and the talent they naturally have.

There's something so universal about how sports can cut across cultural divides and unite people. But the pushback Jessica faces and her own questioning of whether she knows what's best for the children add another layer of complexity to this story. Throughout the movie, how did you balance this duality of an outsider's passionate idealism and optimism, with confronting harsh realities of tradition?

And it was hard to bring girls into the skate park, because the first question the villagers would ask was, "What if she breaks her bones? Who's going to marry her?" But with the boys, it was like, "OK, yeah, he can go and hang around there, it's fine." All of these things we experienced firsthand made their way into the story in some form, or subtle nuance. Even like a dialogue, for example, when Jessica says, "Do I really know what's best for them?" It was all a balance of what we were facing, while constructing the skate park, and staying authentic to where the story was set.

In the movie, we see the inclusion of important dynamics like caste, gender roles, child marriage, and there's almost a casualness to it. In a movie that was catered to the white or western gaze, we might have seen lengthy explanations about this. Who is the audience that you created this movie for, and how did you approach that?

You know, it was very important to not overexplain and be on your nose about these things — it was important to just present the reality of these places. There will be a few things that people in the west may not catch on, that people only in India will get, for example, the period stigma, when Prerna isn't allowed to enter the temple. When a girl is menstruating, she's considered impure, unhygienic, and you're not supposed to enter a place of holy worship. That's sort of brought about through humor in that scene, when her brother Ankush says, "Why don't you come inside?" And she's like, "Oh, I have stomach cramps."

So, these little things may not translate or some people might get it, but I left that to the audience and didn't want to overexplain these moments, and just present a story as authentically as it can to resonate close to home when people watch it in India, and it's refreshing for the audiences around the world when they watch it.

Jessica's story can be highly relatable to the children of immigrants, or people who come from two cultures and might not feel fully embraced by either. How did you try to balance Jessica's love for her heritage with her frustrations with some of the customs that she's up against to build the skate park?

It's a journey of self-identity for her while she's there to discover her family ties. That again was, Amy is a British Indian, and those are the things she goes through in her real life. When she faces, "Oh, are you Indian enough? Are you white?" It's that sort of mixed response when you come back to India, and that's the frustration non-residing Indians face when they come back to India — the frustration with certain things and certain traditions. It's a very interesting journey for Jessica, because she is British Indian and we wrote that into her character so we could make it more relatable.

Jessica and Prerna come from very different backgrounds, but share a lot of similarities, including how before meeting each other, they've always stayed on course and done what they were supposed to. They also share deep roots in the village in their own ways. What do they bring out of each other that changes them, and makes them more rebellious? How did you work with the actors to make that show through?

They spent a lot of time with each other, we did a lot of workshops, improvisations, and things like that, to bring that dynamic together. That's exactly what the story subtly touches upon — that we are more similar than we are different.

When you see Jessica speak to Prerna when they meet for the first time, the first thing in her head is, "I could be in this position." If it wasn't for my life changing — I don't want to give spoilers away — but if it wasn't for something happening in her life that changes the course of her journey, she would have been in Prerna's place. So that connection of also when Jessica goes to the Queen, and the Queen understands Jessica's struggle and knows and relates that to her own personal struggle — it's a story about women across different strata of society, and of course different generations, who can relate to each other in spite of being so different, and in spite of belonging to such different classes and castes even.

That's why the story transcends borders and cultures, because each one of us can find ourselves in one of these characters and relate. That comes from when you watch the film and realize there are a lot more similarities than differences.