In the South, the cheese wafer — the savory-shortbread queen of every drinks party — is personal 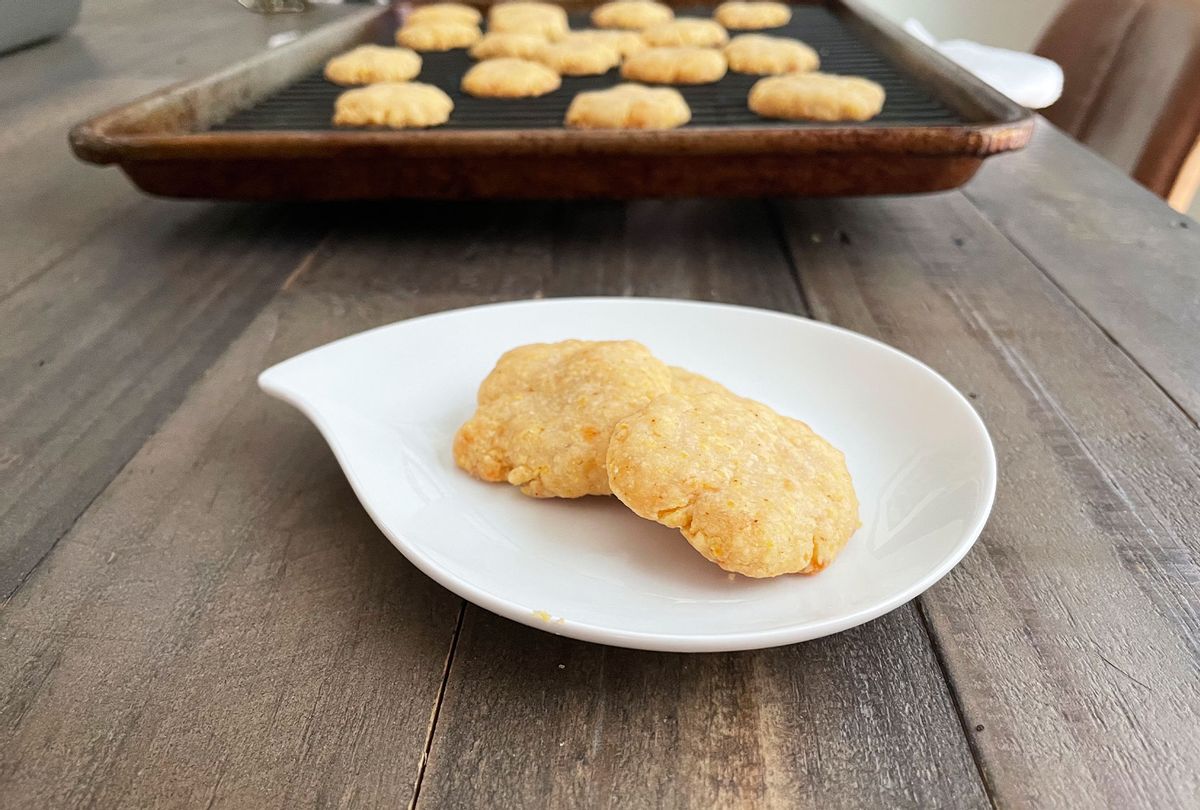 The first time I ate a cheese wafer — the savory-shortbread queen of every southern drinks party — was also the first time I made one. It was weeks into Chicago's umpteenth lockdown last fall, and my bubble friend Louise Price was homesick for her hometown of Raleigh. She'd brought over the three-ring-bound Price family cookbook, titled "Home Cookin'," which contained her late great-gran Mary Dudley's cheese wafer recipe that I made for us alongside other such family treasures as the Gloucestershire Community Club Barbecue Chicken and Blayne's Salad, layered with iceberg, hard-boiled eggs and peas (and iced with mayonnaise, naturally).

"In North Carolina, cheese wafers are like what Garrett's Popcorn is to people in Chicago," Price declared. Flaky-crisp and cheesy with a jolt of heat from a dusting of cayenne, the cheese wafers were, like Garrett's, almost impossible to stop eating once we got going — especially when washed down with a glass or two of pink bubbly.

The simple assemblage of flour mixed with room-temperature fat, shredded cheese and cayenne pepper was credited to a Mrs. Arndt, of whom we know little else, except that she "lived in the corner house now occupied by Mrs. McGee." In typical granny fashion, the method was spare in a manner befitting of someone who'd absorbed it to the point of muscle memory:

Mix well, working in flour gradually. Bake in moderate oven. Do not brown. This works well in a cookie press.

Luckily, the "Cheese Biscuit" recipe that followed Gran's lent enough guidance for me to guess this was sort of like making shortbread. This version, which contained cornmeal for added crunch, came from Julia Mitchell, who was purportedly a friend of Gran's and fellow weaver. More importantly, I quickly learned that this recipe was also the overwhelming family favorite.

RELATED: There's no wrong way to eat a Levain Bakery cookie (this is a judgment-free cookie zone)

"Did you make the cornmeal ones? Those are the ones you should try," Price's mom Olivia Mayer said later, during what quickly became a heated cheese-wafer text exchange. "Those are the ones we all remember. I don't recall ever having had [Gran's]. And in the cheese wafer world, the cornmeal ones are unique because nobody ever makes them that way."

Now we were getting somewhere.

When I called on award-winning food writer, prolific cookbook author, cooking teacher and native North Carolinian Sheri Castle to learn more about this idiosyncratic nosh, she had incidentally just made a batch of her go-to cheese-coin dough to bring to a friend's home in the mountains. (Have you noticed that they've already been called three different names?)

Castle quickly rattled off a handful of other monikers and variations. "Some call them cheese straws if they're elongated; they're called cheese coins if they're half dollar-sized," she said. "Some doughs are flaky, some are more of a Play-Doh consistency. Some people roll and cut them; some extrude them through a cookie press or stamp them out like spritz cookies and put a pecan in the center. I make one version — and this sounds crazy — with Rice Krispies in it, but it makes them really crisp." 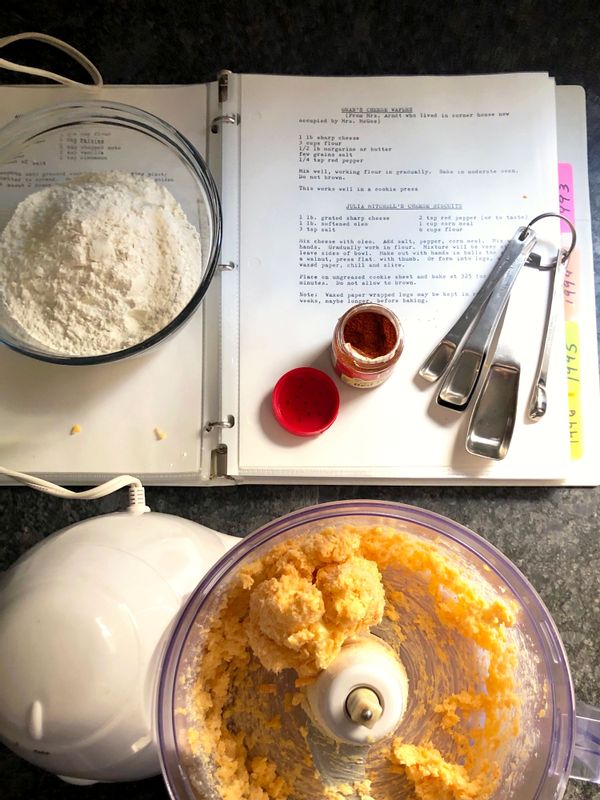 The author learned the hard way that hands are the best tool for mixing cheese wafers. (Photo courtesy of Maggie Hennessy)

Suddenly, I understood why Mayer had insisted that I try the cornmeal variation. The cornmeal adds a satisfying crunch and subdued, buttery corn flavor. As ubiquitous as cheese wafers are across the South, Castle is certain that this simple derivation of a shortbread cookie didn't originate there. "But there's a lot to be said for why we do them better."

Indeed, the origin story and base method of such vernacular cooking, as Castle affectionately categorized the cheese wafer, matters far less than how it evolves with each generation of keeper. Castle couldn't even recall the first time she had a cheese wafer. Her taste memories instead tie to specific instances "when I had ones that were better than mine, and I had to get to the bottom of it."

From a sheer culinary standpoint, certain tenets reveal themselves with enough practice. If you let it rest long enough to let the flour absorb the fat, you'll end up with a better final texture. "The angel's in the details of how you make it your own," Castle said — whether that's through textural breakthroughs, or the addition of blue cheese or bumping up the heat or umami factor.

To this day — and after making a career out of sharing recipes with others — Castle, too, keeps one or two hard-won secrets for her own family canon. "I have a version of my cheese coins that I tell people about, and I have one with a couple of secret ingredients that are mine," she said, "and I will pass them onto my daughter."

So if you're lucky enough to inherit a spiral-bound community or family cookbook that contains a cheese wafer, biscuit, coin or straw recipe, hold tight to it and stake your claim. Maybe you share it for the next printing of "Home Cookin'," or maybe you keep one or two secrets for yourself. 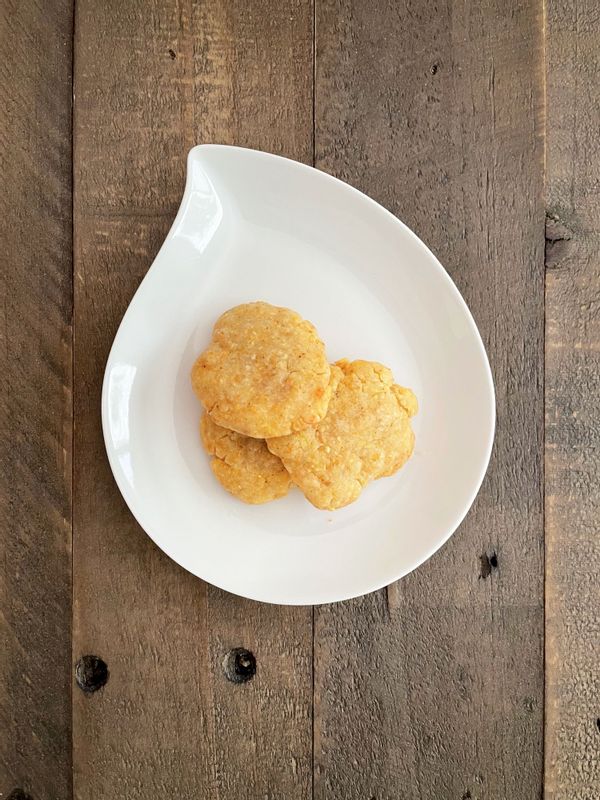 For cheese wafer novices: A note on their nefarious tendency to crumble

When I emailed Sheri Castle in a panic because my cheese wafer log had crumbled when I took it out of the fridge to slice it, she gently reassured me that I should not also crumble. She also shared some invaluable tips to keep in mind before you start baking so you don't find yourself muttering expletives as you gather up the fragmented remains of your dough log to form into cracked biscuits. (By the way, they were still delicious!)

With cheese wafer dough, you're looking for a consistency like Play-Doh — "firm enough to squeeze into a tight ball without crumbling but not greasy," according to Castle. She tests this by pressing a knuckle into the formed dough. "If it leaves a clean impression that does not close or leave sticky dough on your hand, it's probably good."

As with making pie dough, it helps to bring cheese wafer dough together using a few tablespoons of ice water. Again, like pie dough, no two batches of cheese wafer dough take exactly the same amount of water. It depends on the type of flour, cheese and other seasonings you use, as well as whether you work the dough by hand versus in a food processor. Castle's personal recipe, for instance, calls for a range of 3 to 6 tablespoons.

One more thing: If you chill the dough before baking, let the disk sit on the countertop for a few minutes after you pull it from the fridge so that it doesn't crack when you try to roll it. "It's easiest to work with when it's closer to room temp," Castle said. "If the dough gets too soft and stretchy as you roll and shape the biscuits, put them on the baking sheet and refrigerate the entire thing until firm again before baking. Chilled dough in a hot oven really helps the texture."

Perhaps most importantly, if at first you don't succeed, eat those damn crumbly biscuits and try, try again!

Preheat the oven to 325 degrees.

Using your hands, mix the butter, cheese, cayenne and salt together in a large bowl. Add the cornmeal and flour, rubbing it into the butter and cheese until it forms small crumbs with a few bigger clumps in it. Add ice water, a tablespoon at a time, mixing with your hands just until the mixture forms a ball that lightly sticks together and pulls in all the flour. To test, press a knuckle into the dough; if it leaves a clean impression that doesn't close or leave sticky dough on your hand, it's just right.

Shape mixture into 1-inch balls, place them about an inch apart on an ungreased baking sheet and press them out flat with the palm of your hand. Or form the dough into logs, wrap in wax paper and plastic wrap and chill in the fridge up to a few weeks in advance. (Note: If you chill the dough before baking, let the log sit on the countertop for 15 minutes after you pull it from the fridge so that it doesn't crumble when you try to cut the biscuits.)

Bake for 12 to 15 minutes, or until firm. Do not brown. Remove, and cool on the pan on a wire rack. Store in an airtight container for up to 1 week.