My favorite, simplest eggplant parm (Yep, this recipe is as easy as it gets!) 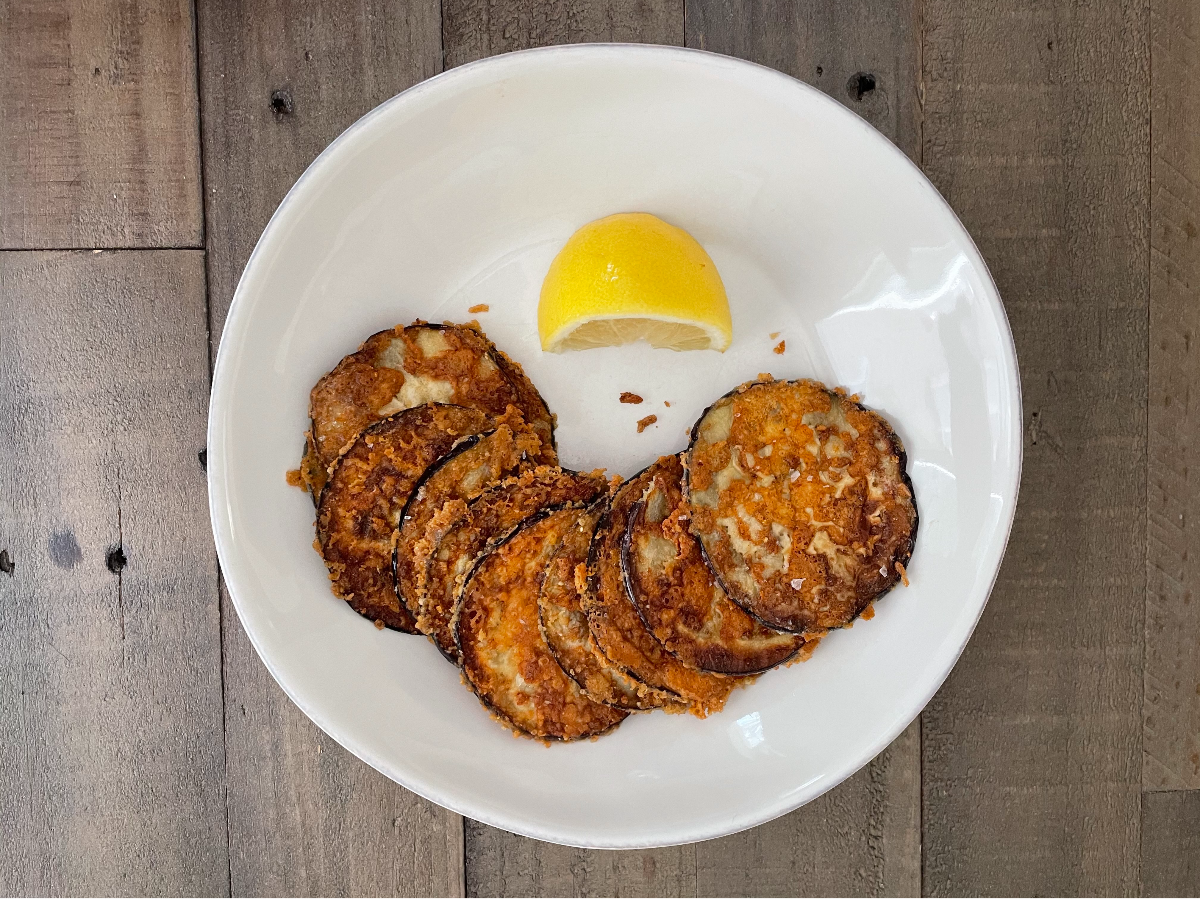 Certain ingredients will always make me feel a little self-conscious. (Whole fish, I'm looking at you. Are you overcooked or raw in the middle?)

Eggplant used to be one of them. I attribute this to a few early experiences of cooking it to the unfortunate texture of packing peanuts, coupled with a raft of advice from various cooking media that led me to believe it was one of those dreaded finicky vegetables. Don't even bother cooking it if you didn't salt it first, they warned.

The predominant theories claimed that salting would draw out excess moisture (resulting in a better final texture) and remove some bitterness. Both have since been mostly debunked, except perhaps the one that says pre-salting helps create a creamier middle when frying.

Wait, frying? But that's how I make eggplant parm!

Of course, when I relayed all this to my Mom, she scoffed. "You don't need to do that with this eggplant parmesan! This recipe is as easy as it gets."

It was maybe the tenth time I'd called her asking how to make her foolproof eggplant parm, which requires zero pre-salting and comes out delicious every time. To make it, you thinly slice eggplant, dredge it in beaten eggs and grated cheese, then pan-fry it in batches until golden brown.

"There's egg and cheese, and the eggplant is there kind of holding everything together," Mom said. "Just a little sponge for that nice crispy cheese and grease."

This non-recipe traces to an Italian immigrant and friend of my grandmother's who worked with her at a department store in Fairfield, Conn.

"She was a hot ticket — this cute Italian lady who liked to smoke and drink," Mom said, as if these qualities cemented her eggplant parm prowess. (They did.)

The method requires patience and care that you don't overcrowd the pan, which causes the eggplant to steam. But other than that, it's wonderfully forgiving — and versatile. I've used it on the abundance of zucchini and summer squash that starts overwhelming my CSA box each July. I also like to use it on young-ish sliced broccoli stems.

Once the eggplant is fried, you can submerge the slices in marinara sauce and serve them over pasta; or pile them on a sandwich with pesto; or slice them into strips and toss them into pasta alla norma. Or you can stand at the counter, like my Dad does, sprinkling them with salt and snacking on them while they're still warm with a glass of white wine.

All this is to say, I've thoroughly exorcised my eggplant demons. 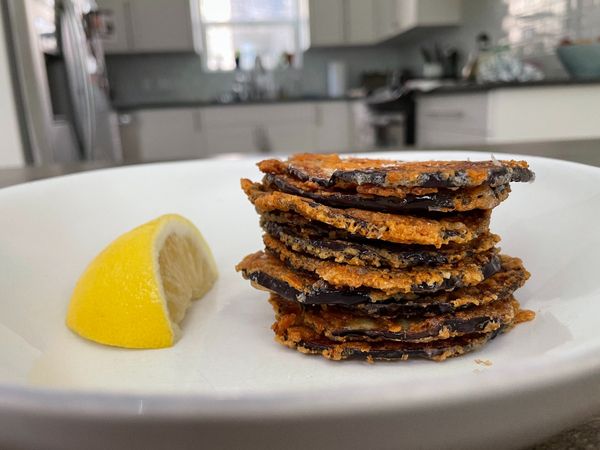 (As mostly dictated by my mom, Madeline Shea)

Cut the eggplant into very thin, probably 1/4-inch slices. This can be a nuisance because it's hard to keep them even. The more you do it, the better you get. Stack the slices on a plate.

Crack the eggs, whisk them up and pour them into a shallow bowl. Get somebody to grind up a huge pile of parmesan or pecorino for you. (That white gold can be overpriced, and pecorino tastes good with this, anyway.) You'll probably have to ask them to grate more at some point — this recipe needs a lot of cheese! Spread out the grated cheese in a shallow bowl, and set it next to the beaten egg to create a little assembly line.

Get a non-stick pan hot over medium heat. (Do you have a no-stick? It just comes out better.) Add a good amount of olive oil once it's hot.

Throw a piece of eggplant in the egg wash; really get it in there on both sides. Let some egg drip off, then submerge the eggplant in the cheese, coating both sides. Throw the eggplant in the pan, and brown it until golden brown. Then flip it, and do the same thing on the other side. Depending on how big your pan is, you can cook a bunch at a time — but don't overcrowd them. Repeat, knowing that you'll need to keep adding olive oil. These things really suck up oil, so don't feel like you have to use the best-quality stuff.

Put the browned eggplant slices on a paper towel-lined plate. After they drain a little, you can start piling them up. This is when Dad comes and puts salt on them and snacks on them. They're really good with a little salt when they're warm. (Note: A squeeze of lemon takes them over the top.) Or serve them with pasta and marinara sauce.

You can also easily freeze them at this point. Get a gallon-sized freezer bag, and stack the eggplant in alternating layers with pieces of paper towel. Seal the bag, and pop them in the freezer. After 30 minutes or so, shuffle them around a bit to make sure they're not sticking to the paper towels. To reheat, simply pan-fry them in a little oil; or arrange them in a single layer on a sheet pan fitted with a rack, and bake them in a preheated 375-degree oven until hot.

That's it. You get it, right? It's pretty forgiving.