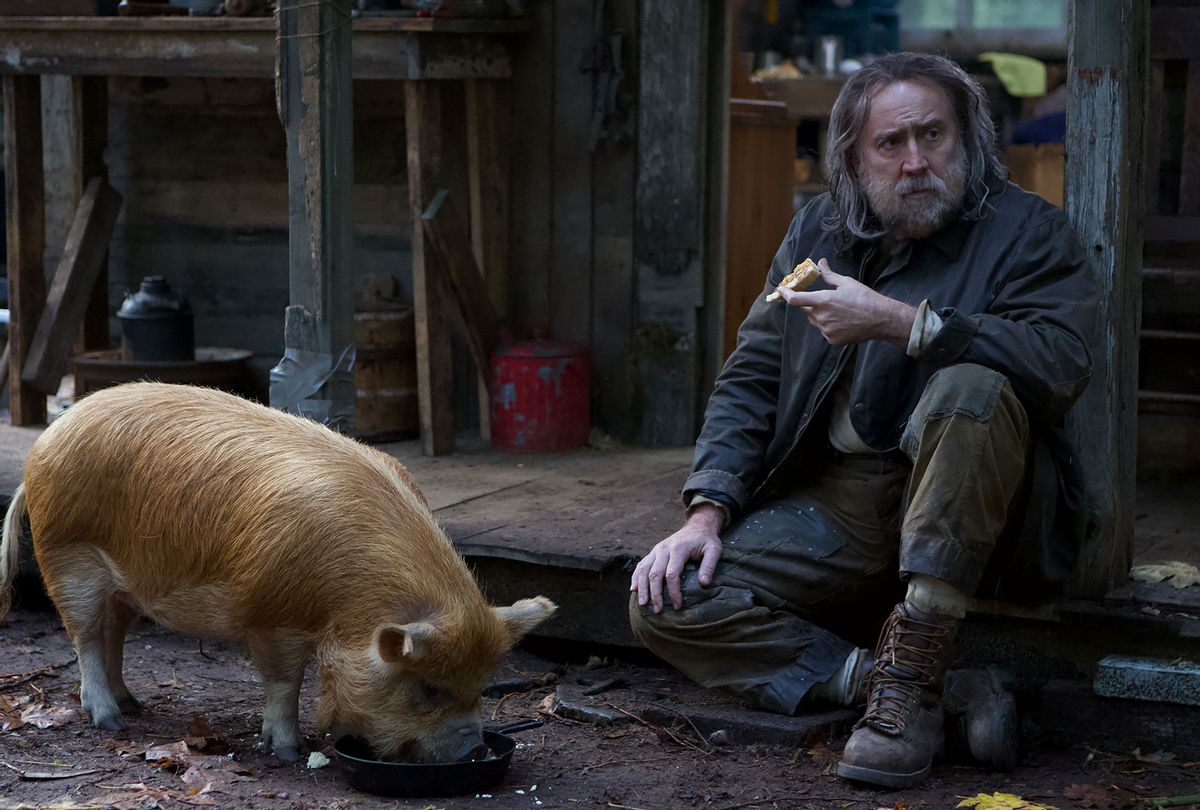 Nicolas Cage may be aiming for a(nother) comeback of sorts with his latest film, "Pig," but inasmuch as he'll get cred for playing against type, this film is woefully mediocre.

Cage stars as Rob (Robin) Feld, a once-famous chef now living in the Oregon woods hunting truffles with his beloved pet pig. He provides his findings to Amir (Alex Wolf), a young, Portland city slicker who offers Rob a cell phone and a shower. The film's early scenes depict Rob as a solitary man with unkempt hair. Cage whispers his few lines of dialogue. (Don't worry, he yells a bit later.) The actor, who has been prone to wild, manic performances, is more "internal" mode here, and it is nice for him to take a serious project, or a project seriously. He digs into the earth and tastes its loamy richness; this is not the Nicolas Cage eating a cockroach as he did in "Vampire's Kiss" decades ago.

However, director Michael Sarnoski, who cowrote this revenge thriller with Vanessa Block, does not maintain this Kelly Reichardt-style quietude very long. Less than 12 minutes in, Rob is attacked, and his pig is stolen. (Props to the sound designer who capture the stickiness as Rob lifting his wounded head out of pool of congealed blood.) Rob may be injured and angry, but he really just wants his pig back. (Expect this to become the new/latest Nic Cage meme).

"Pig" is pretty much a facile parable about loss as Rob and various characters he encounters mostly come to acknowledge that they have lost what they love. Sarnoski's film is not much deeper than the ground where the prized truffles are hiding, which is disappointing.

Rob's isolation from society is his form of coping with loss. (See Robin Wright's superior "Land" for more poignant portrait of grief.) While Cage tries to capture Rob's inchoate despair with his reflective performance, his efforts never quite stick the landing. Rob is righteous when he needs to be humble, and too hellbent on serving revenge — hot or cold — to warrant any real sympathy. In contrast, Amir is just a douchebag who feels obligated to his cash cow, and Wolf plays him as flashy and whiny. It is always a relief when Amir is off screen.

Rob's journey takes him to Edgar (Darius Pierce) and an underground fight club where Rob gets pummeled. He asks Amir to secure him a lunch reservation at an exclusive restaurant run by Finway (David Knell), who used to work for Rob. With his face bashed in and still sporting the unwashed Grizzly Adams look, Rob is served "emulsified locally sourced scallops encased in flash-frozen seawater on a bed of foraged huckleberry foam bathed in the smoke of Douglas Fir cones." He takes a bite and demands to see the chef. As they talk, Rob punctures Finway so effortlessly that "Pig" forces viewers to suspend disbelief. Even if Rob was once a demanding star chef who fired Finway for overcooking pasta, could he really break down his now successful protégé with a single reality check about not opening the English pub Finway dreamed of? Apparently so.

The episode is as dubious as a later exchange Rob has with Amir's father, Darius (Adam Arkin). A powerful food supplier who may know the whereabouts of Rob's precious pig, Darius has the upper hand. But Darius still allows Rob to serve him a dinner that will trigger his emotions and sympathies. Why?

Even a scene where Rob meets a young boy, Bryce (Davis King), who lives at the home where Rob once did is head-scratching. They talk about a removed persimmon tree. Yes, it's about loss, but it is kind of creepy that Bryce lets in this stranger who looks like a homeless person. (Where are his parents?) Better is a scene where Rob visits a baker he once knew, and they share a quiet intimacy and mutual respect.

Alas, Sarnoski, who should have featured more scenes like that, often goes for the obvious not the ambiguous. Amir is defined by his flashy yellow Camaro, and his fear of and anger towards his father. Amir's speech about the dinner Rob served that gave his parents what may have been their only moment of happiness is more dispiriting than inspiring.

Perhaps the best way to read "Pig" is as a metaphor for Cage's uneven career. Darius tells Rob, "I remember a time when your name meant something. . . .  You have no value. . . .  You don't exist anymore." Likewise, in his exchange with Darius, Rob is told "You had your moment. There is nothing here for you anymore." If only these remarked were delivered with impact or emotion. Instead, they ring hollow. (Viewers can just watch the comedy skit: Nicolas Cage's Agent for this kind of messaging). Moreover, Rob throws a version of those lines back at Finway, telling him that his customers "don't see him," and he needs — and needs to give his customers — "something to care about."

"Pig" doesn't give viewers much to care about, other than perhaps the title character. Sarnoski's film is undercooked.

"Pig" is in theaters beginning July 16.