How "House of Cards" prepared Robin Wright to direct "Land," a moving tribute to nature & resilience 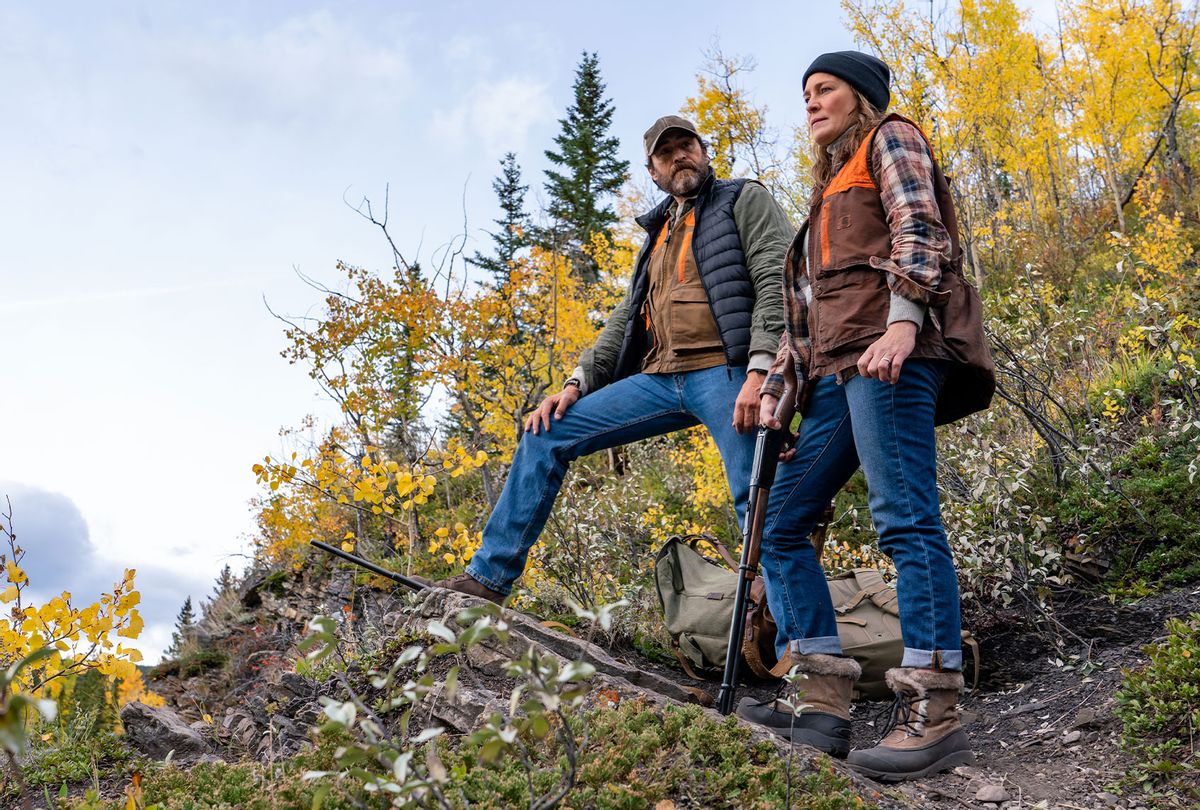 Robin Wright makes an accomplished feature directorial debut with "Land," in which the actress-turned-filmmaker plays Edee Mathis, a woman whose method for coping with trauma is to go live on her own in a cabin in the woods. She struggles to survive at first, eventually befriending Miguel (Demián Bichir), who teaches her to hunt. (She dubs him "Yoda.") Even though she does not want to be around people — "I'm here because I choose to be," she insists — she appreciates Miguel's kindness.

Wright gives a tough, determined performance in what ultimately is a very moving film. Edee spends much of her screen time alone in the first act, experiencing setbacks and almost dying as she is unprepared for some of the challenges she faces. As Miguel helps her adapt to her new environment, Edee focuses more on her goals and less on her pain, which helps her work through her trauma.

"Land" is beautifully filmed and shot in Alberta, Canada, and Wright captures the isolation and desperation Edee experiences along with her growing sense of home and peace with noticeable aplomb.

During the recent Sundance Film Festival, Wright spoke with Salon about "Land."

Why make this film as your feature directorial debut? Do you feel a pressure to create your own opportunities at this stage in your career?

This film resonated with me because I thought about how people find their way when they have lost their loved ones, the life they knew, and wouldn't know again. This character comes into her life and she has a renewed sense of faith and hope and resilience.

I have so much more to explore about directing, but being on "House of Cards" I was able to physically do it while I was learning about framing and cinema. Being an actor for so many years you bite your tongue wanting to direct a scene, so it is in the recesses of the mind. I knew I wanted to do it, and "House of Cards" gave me education, confidence, and a platform to explore and feel it out, and the crew was eager to help me. Collaborating with teams of people, its invigorating to create and hear ideas; everybody is directing this movie with you. You get more creative minds and ideas to bring to your original vision.

Did you have a Yoda to guide you in making the film?

I admire the physicality of your performance and that you are on screen almost the entire time. What can you say about learning to hunt and survive in the wilderness? Are you into roughing it?

What Edee decides to embark on — that's real roughing it. My family grew up camping. We had a VW Vanagon Westfalia, and we would camp. We lived outside of the house almost as much as in it.

Is there a creature comfort you can't live without?

We do live in this world of devices and necessities. I feel like once you get rid of those annoyances, addictions — if you were to do what Edee does — you can adapt quickly. She wouldn't have gotten cell service. She did bring manuals.

What about being alone and loneliness, which is something we all can identify with these days? We see Edee alone through much of the film. How do you spend time alone?

It's almost like fuel, a different kind of essence. We are around the same people or isolated in the same house or location. Being alone is difficult for some people, but it's also therapeutic to go out in nature and be alone.

Nature is so much a character in "Land."

We talked about that a lot when we were developing the script, how and when she first arrives, she doesn't notice the majesty because she is so locked in a bubble of pain and grief, and she is there to technically survive. Once this beautiful person [Miguel] comes and says, "You have to respect nature, and live off the grid properly," she communes with nature. That's such a successful thing to have done. Nature is such a beast with unpredictable weather and animals.

I want to talk about the framing and your use of space as a filmmaker. I felt the warmth, cold, and briskness of the fresh air; the isolation and beauty, but also the silence and the sound of the river. Can you talk about your compositions?

I think it helped that we were living what we were shooting. We lived on top of the mountain in our trailer, at base camp behind the cabin. Our cinematographer, who probably lives in a tent all year round, stayed in Edee's sleeping bag so he could catch all of the beautiful images at all hours of the night, and at sunrise and sunset. Alberta has unpredictable weather.

What about pacing? The film has a structure that shows her experiencing the stages of grief.

That is how we broke it down. We really needed to balance the timing of each so viewers could be engaged and take this journey with this character and see how one person experiences and deals with an unfathomable event that changes her life. The dream was to live there, and I feel her [escape] was an homage to that, to honor that wish to live on the mountain in a cabin.

What observations do you have about Edee's relationship with Miguel? I was really moved by their exchanges.

It was always in the original script that it would be just a platonic friendship. He happened to cross her path and felt it was his duty — you help other people.

What qualities do you value in other people?

Kindness. It allows for more trust if you have an open, beautiful soul like Miguel. He's pure and frugal with words and actions. He speaks and shows up when necessary.

Yes. I would probably do the same thing, think that I could survive if I read enough books, learn more while I'm there, and figure it out. And then nature kicks your butt.

What observations do you have about her fragility and vulnerability?

I thought about how did we want to open the film? Do you show her past life or the event that happened, or keep the mystery?  I chose to keep the mystery because then you are going on the journey rather than knowing and rolling back. I kept going to the word "erase" — that Edee's old self can never be anymore because of this event that changed her life. She needed to depart and find a new way and a new self. That's the intention of the character and then you say it is one person's experience about how they find their way.

What appeals to you about the story of "Land"?

The message around those ideas, but that was stronger for the visuals. That was a beautiful addition, that nature got to be a character. Really, it was the powerful message that we need each other and need to be connected so healing can occur when you think there is no light at the end of the tunnel. I wanted that message out there because we've been through so much hardship with the last four years and the pandemic. It was so kind, sweet, loving and that was a time we need to share that message.