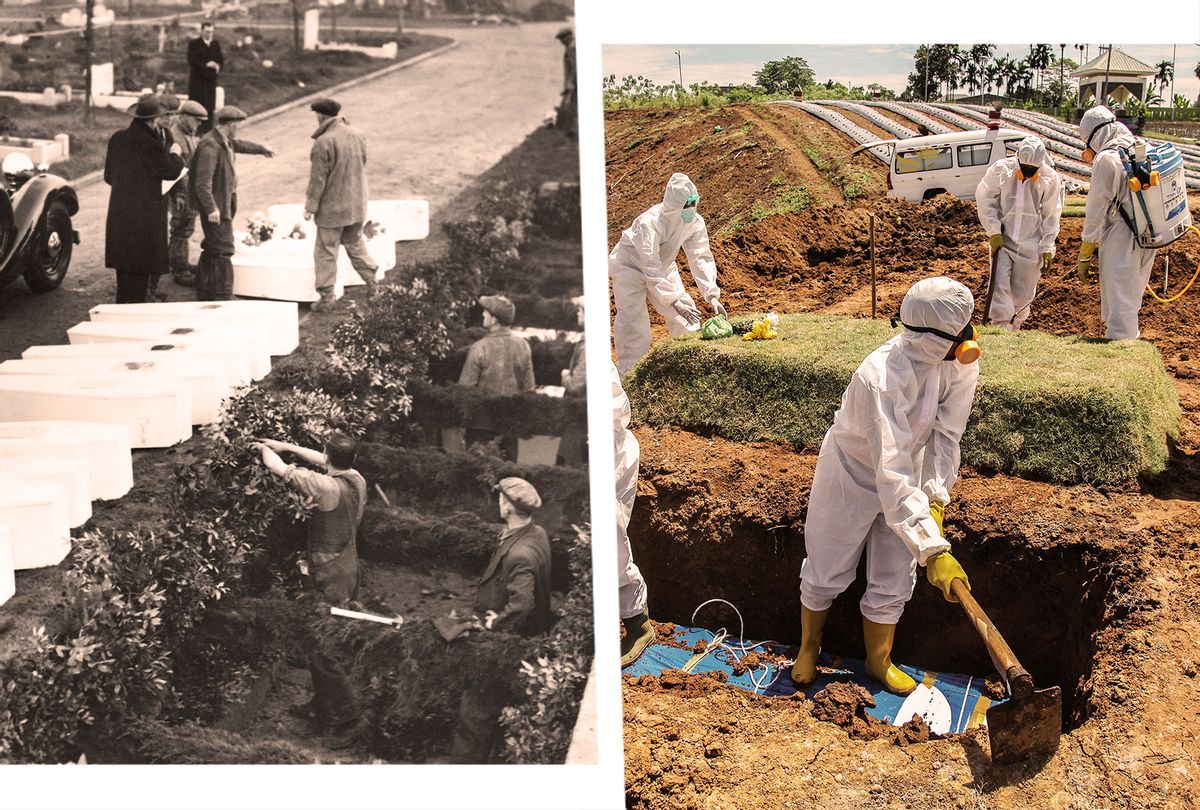 The funeral of victims of a Nazi bombing in London during WW2 | Funeral workers bury the coffins of Covid-19 victims at a cemetery on July 19, 2021 (Photo illustration by Salon/Getty Images)
--

Between 1942 and 1943, the average life expectancy of an American fell by 2.9 years. The United States was fighting a fascist menace overseas, while a terrible economic calamity had not yet fully receded into the country's rearview mirror.

The overall 1.5-year drop is the largest one-year decline since World War II (when the 1942-1943 drop occurred) and puts life expectancy at the lowest level since 2003. The main contributing factor here is, not surprisingly, the COVID-19 pandemic, which hit the United States unusually hard. Almost three-fourths of the growth (74%) was due to the deadly disease, with drug overdoses also playing a big role. (This is based on provisional data covering the entirety of 2020.)

"Life expectancy has been increasing gradually every year for the past several decades," CDC researcher Elizabeth Arias told Reuters. "The decline between 2019 and 2020 was so large that it took us back to the levels we were in 2003. Sort of like we lost a decade."

While COVID-19 caused a historic drop in American life expectancy, the country's collective mortality rate had been faltering for quite some time. This was not always the case: Between 1959 and 2010, the average American's life span increased by almost a decade, from roughly 69.9 years to roughly 78.9 years. Starting in 2010, however, factors like obesity, drug addiction, alcoholism and suicidality caused the average life expectancy to plateau. (The United States is the only developed country whose life expectancy stopped increasing after 2010.) By 2014, life expectancy began to actually go down, a trend that would continue for three consecutive years.

"For as many people that it killed (50-100 million), the 1918 flu had relatively few long-term impacts on public policy or culture," Dr. Joshua S. Loomis, an assistant professor of biology at East Stroudsburg University, previously told Salon in an interview. "People generally considered the 1918 flu as a horrific extension of [World War I]. When the war and pandemic ended, most people simply wanted to move on and enjoy the economic boom of the 1920s."

Prior to COVID-19, American life expectancy was struggling due to a series of small cuts rather than any giant wound. The COVID-19 pandemic, it now appears, may have been just such an injury. Especially in light of news that the delta variant of the SARS-CoV-2 virus (which causes COVID-19) is spreading rapidly, this news is all the more reason to fight the pandemic and address other ongoing health crises in the United States.